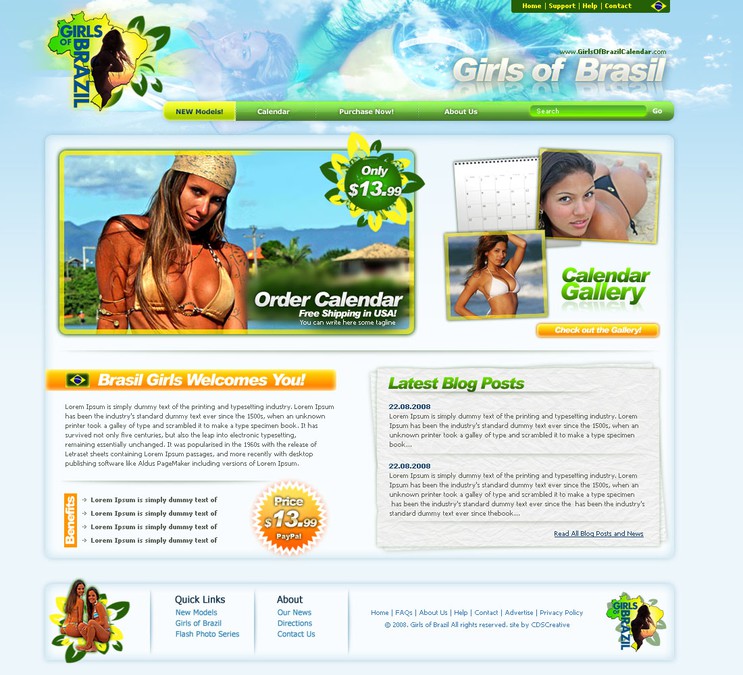 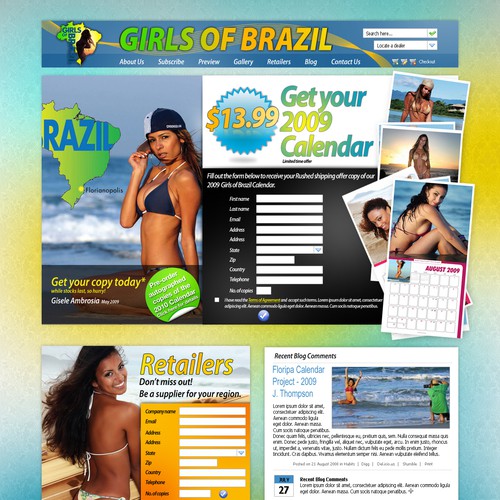 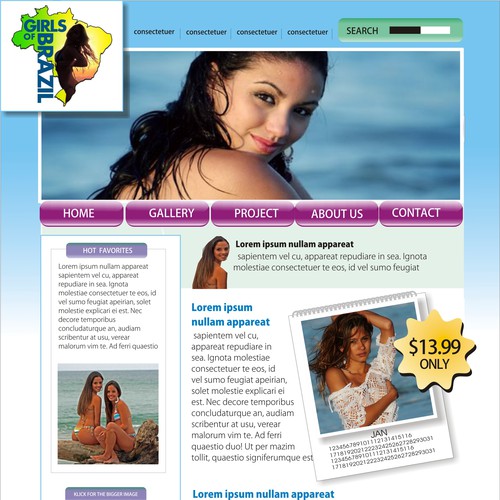 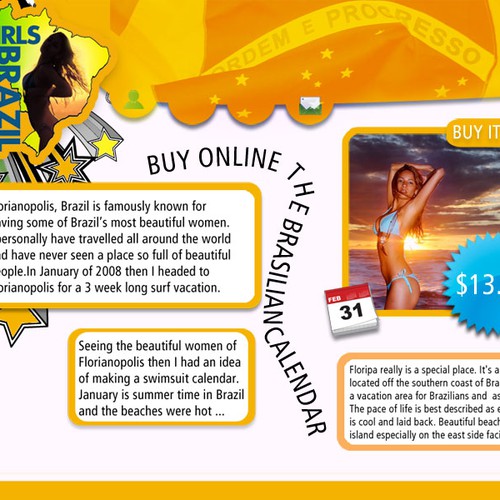 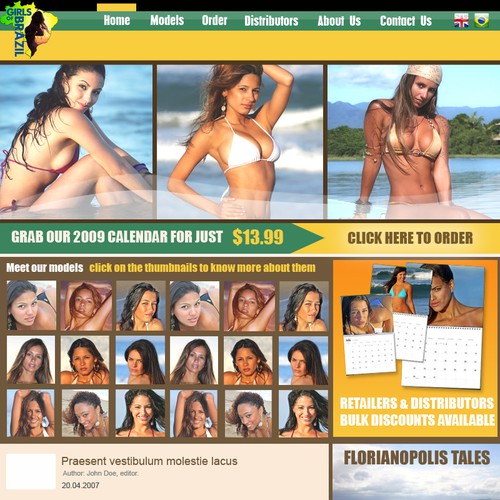 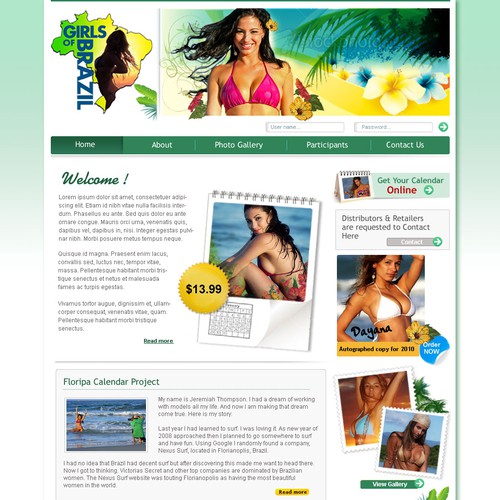 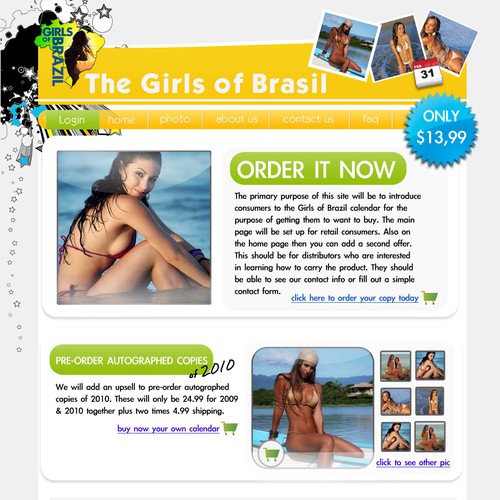 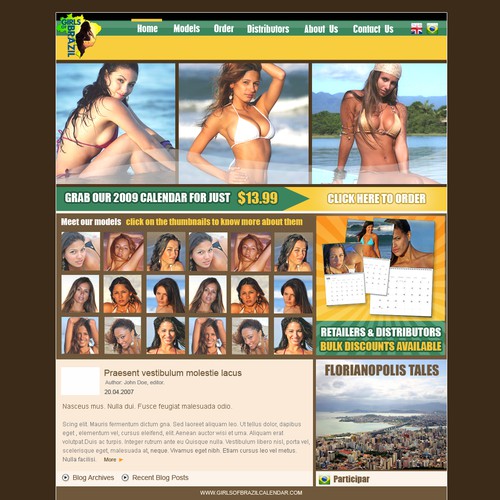 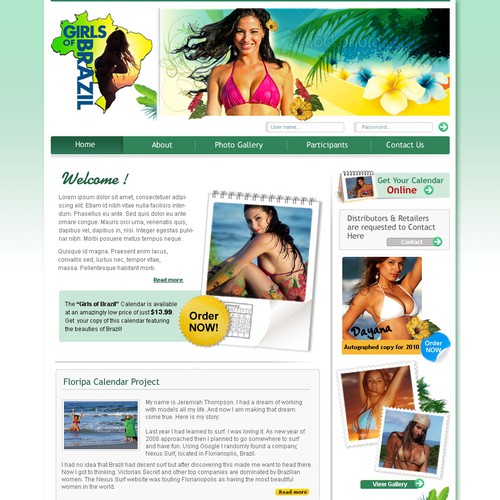 This site will be used for retail and wholesale distribution of a swimsuit calendar.

The primary purpose of this site will be to introduce consumers to the Girls of Brazil calendar for the purpose of getting them to want to buy. The main page will be set up for retail consumers. Also on the home page then you can add a second offer. This should be for distributors who are interested in learning how to carry the product. They should be able to see our contact info or fill out a simple contact form.
We would also like to have blog area with a clean design as well similar in style to http://www.glacieradventure.com/ . The site needs to be layed out for SEO and ease of customer experience. It also needs to be mindful of a direct call to action

The story of the calendar is as follows:

Florianopolis, Brazil is famously known for having some of Brazil’s most beautiful women. I personally have travelled all around the world and have never seen a place so full of beautiful people.
In January of 2008 then I headed to Florianopolis for a 3 week long surf vacation. Before this trip I had never shot professional photos of women, or anything else for that matter. I was an avid amateur photography but living in Montana then my prior subjects had always been nature, such things as grizzly bears or sunsets.
Seeing the beautiful women of Florianopolis then I had an idea of making a swimsuit calendar. January is summer time in Brazil and the beaches were hot and crowded with thongs (woohoo!) (and unfortunately speedos – yikes).
I found the first model, Fernanda, with the help of my good friend Hans Keeling of Nexus Surf. She was working at the beach renting out fresco paddles. Her job required her to work 6 to 7 days a week but as luck would have it then she had a day off the following day. And she was interested in making photos. I picked her up the next day at 5 AM and we shot photos till 8:30 PM. She did all this for free. She just wanted to have copies of the photos for herself. So my project officially began!
I found more models at the beaches during the day and then at night had pretty good luck at the clubs. The girls were enthusiastic about participating. And every girl worked for free!
Here is a secret you need to remember if you ever visit Brazil: girls love to have their photos taken even if it is a complete stranger taking the photo!
I wound up shooting 10 girls during my first “vacation”. I returned a couple of months later to shoot another 10 girls. So 20 girls total were shot for this project and 15 of those are found inside the pages of this calendar.
Most of the girls had no prior professional modeling experience. Their backgrounds varied and included: bar manager, nail tech, dentist, phsychologist, restaurant owner, video clerk, clothing store sales, grocery clerk, and of course modelling.
I worked alone when shooting the photos. There was no crew to help with lighting reflectors or anything like that.
The girls generally wore their own bikinis although sometimes I bought bikinis if I knew I could find a better one. These were then gifted to the models.
Because I worked alone without the help of professionals then the models always did their own makeup/hair.
My camera gear consisted of a Canon 40D along with Canon lens and flash equipment. It was a pretty simple setup and the same you might buy yourself if you were into shooting amateur photography.
Shoots generally lasted a few hours but sometimes were an all day affair. I always shot at the first light of the day or near sunset when lighting was best.
Most of the girls requested I shoot them again after the first session. Some of the models I wound up shooting many times. They just liked more and more photos of themselves! Well I didn’t mind shooting them so this was not a problem
I have to say this is the funnest project I have ever been involved with. Before this then I was part of the dot com world and was pretty much hating my work. In coming to Brazil I found something that is fun and that I could be good at.

you can find some of the pictures at http://www.floripacalendar.com however this is not necessarily the look we are going for.

- Item 1...layout with ease of consumer in mind
- Primary call to action for consumers to buy the calendar online
- Secondary (smaller) call to action for distributors/retailers
- blog ablility
- fresh, clean modern design utilizing pictures from the site. I can provide additional photos if requested.
- You can put sample photos and calendar months, covers too
- We will be doing a 2010 calendar as well
- Retail price is $13.99
- We will add an upsell to pre-order autographed copies of 2010. These will only be 24.99 for 2009 & 2010 together plus two times 4.99 shipping.

- Item 1...cluttered or busy designs
- cookie cutter style design
- Please use the logo's we have provided

Fun desing for a new t-shirt and custom apparel website
C$ 1.199
We would like a new home page design for a site that sells graphic tees and customizable tees. The elements are currentl
49
entries
16
designers
BattleMoney Website Design
DKK 7.144
Win money by playing games. BattleMoney is an online esports platform where gamers compete against each other for real
26
entries
3
designers
New Social Online Gaming Web Design in Brazil and USA
$ 2’799
We are looking for a new website design of a homepage, secondary page, and mobile homepage that brings people to a socia
58
entries
14
Designer
Visual/graphic design for homepage of a domain registration and hosting company
US$ 2.499
CDR has provided easy domain registration, web hosting, professional email, and other website services to domain collect
143
entries
28
designers
Luxury Supplements: BrunoMD
599 $
Please read - https://brunomd.com/pages/our-story to learn more about who we are and what we do. Our target audience in
98
entries
27
Designer
Rooster/Chicken Farm in Turkey looks for a website
€549
The company is zero days old and wants to give an impression of what we want to be. We shall produce rooster (male chick
107
entries
25
デザイナー数