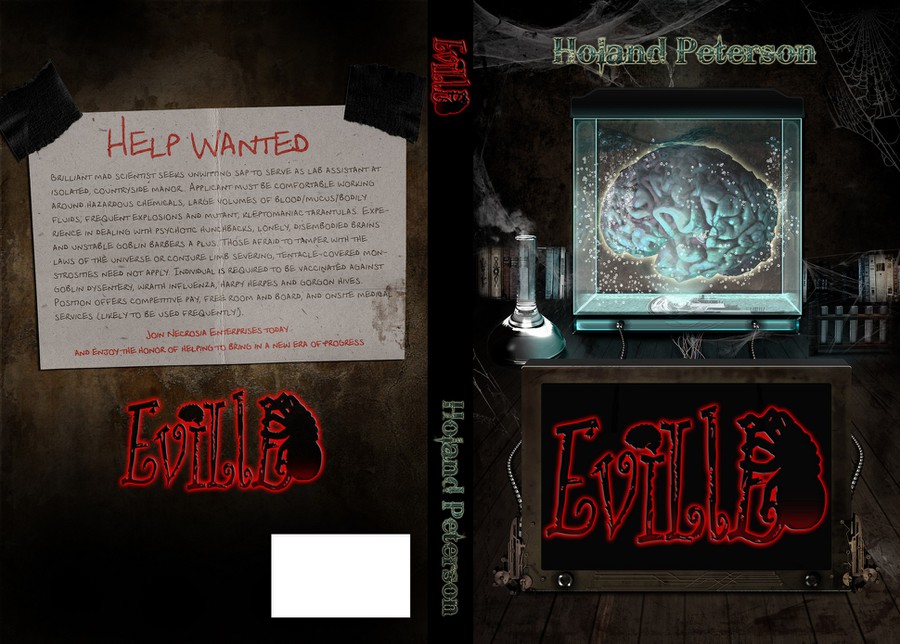 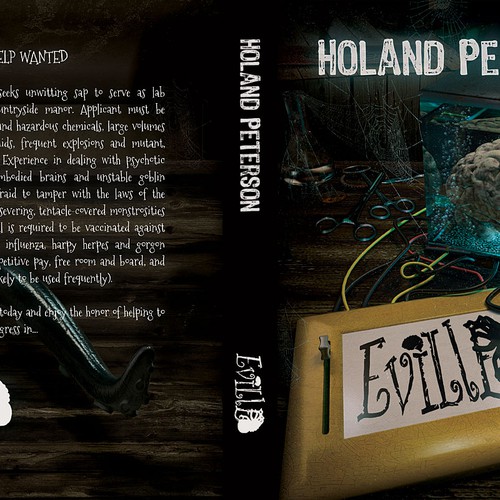 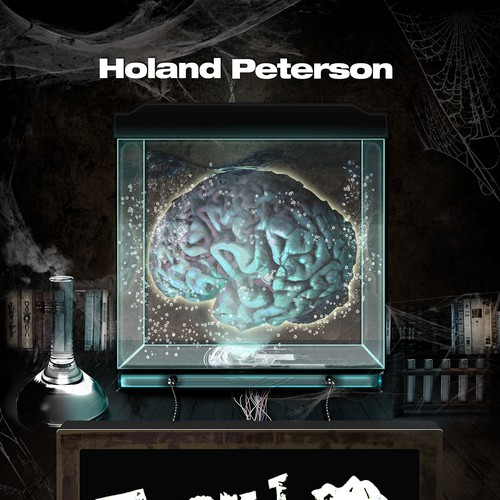 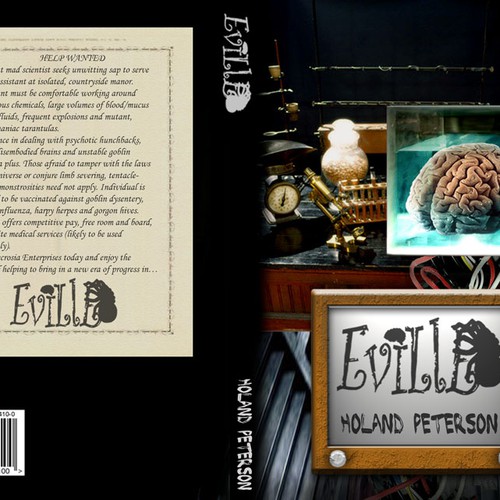 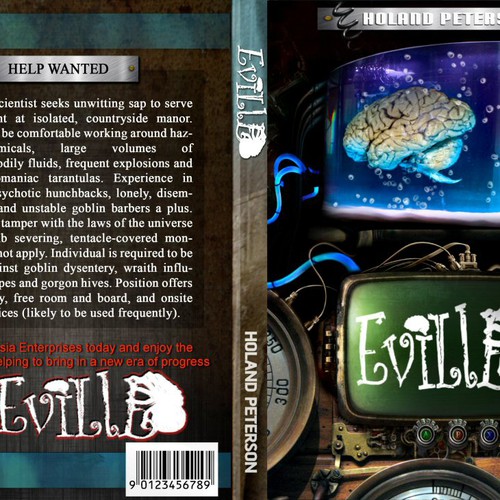 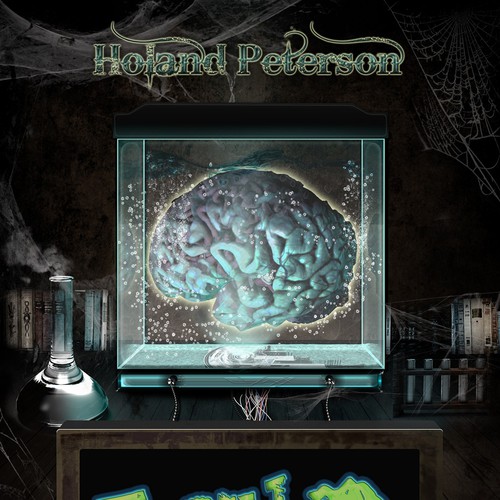 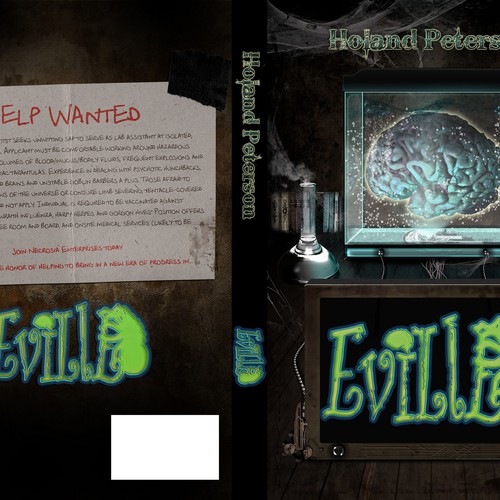 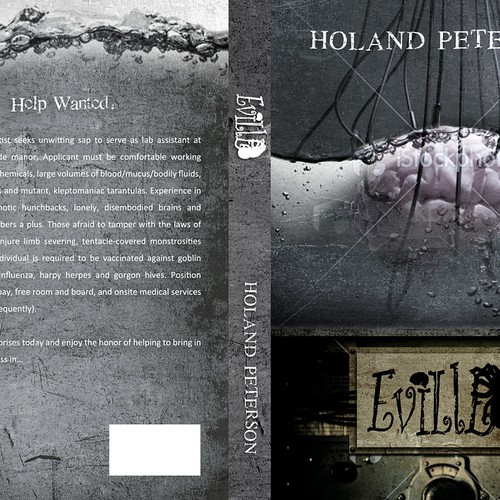 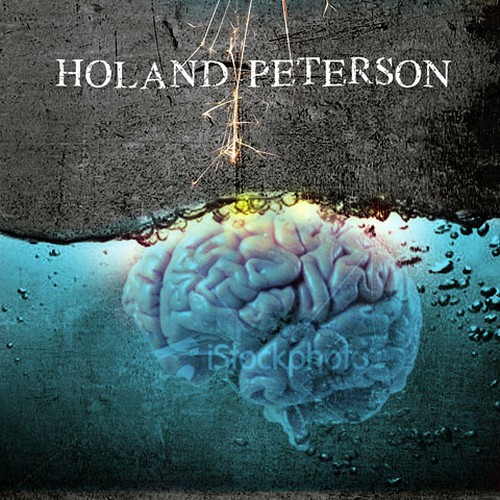 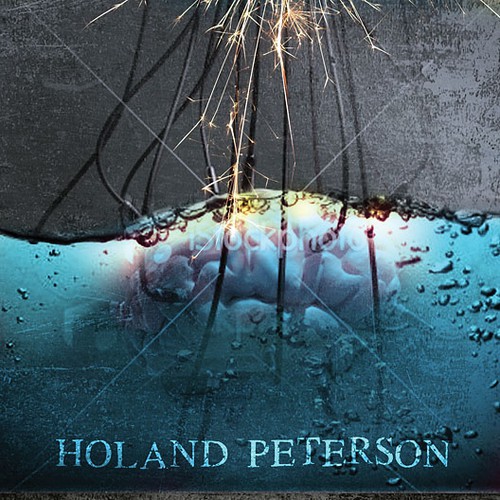 I am needing a book cover for my novel Eville. The book is complete, and I intend to have it uploaded to Kindle ASAP, as well as move into self publishing with actual print copies. I need an image which will stand out and grab people's interest, looking attractive as both a thumbnail image as well as a standard book cover.

Eville is something along the lines of The Hitchhicker's Guide to the Galaxy crossed with The Addams Family, with a dash of Back to the Future. It's a quirky black comedy, creepy, lots of adventure/action and fun. So the image has to capture that mood.

I have in my mind the idea of featuring one of the main characters on the front cover. He is a disembodied brain in a small fishtank, and attached to the tank is a worn out old Etch-A-Sketch style toy which is his only means of communication. I was thinking that within the toy's screen we could have the title of the book inserted, along with my name. In the interest of avoiding legal problems, it is likely best an actual image of an etch-a-sketch is not used. But some manner of tablet like device that can display the imagery is needed. With wires coming out of the device and connected to the fishtank, it should still convey the idea that the brain is communicating through it or some other oddity is occuring there.
I already have a logo for the title, as attached, which is how I want "Eville" to look, and gives you a general idea of style.

I like the idea of a photoshop work, a real brain, tank, tablet thing, etc, with cool lighting, rather than a drawn/painted/cartoony look. But I'm totally open to anything if it really looks great.

Beyond featuring this character, I'm quite open to creativity.

This is the text from the book where I introduce the character. Hopefully this will assist in providing a mental image for you:

"Next to an especially worn seat was a small fish tank of sorts, lit up in a pale blue light, small bubbles trickling upwards from the bottom, and emitting a soothing sound of peacefulness. Attached to the base of the tank was a worn, old Etch-a-Sketch toy, a jungle of wires sticking out from all sides. Oddly, however, no fish were to be seen swimming about in the water. Alex walked up closer to the tank, and let out a short gasp as he noticed a human brain resting motionless on the gravel covered bottom."

As I already said, this is a Sci-Fi/Fantasy/Adventure/Comedy, so it is definitely a genre piece and is intended for folks who like that sort of thing. This is not a young adult novel, but I did write to be something of a PG-13. So the cover should be macarbe and bizarre, but not necessarily sinister and overly gruesome.
Of help might be my website http://www.holandpeterson.com. There you can read the first chapter in full if you choose, which would give you a good idea of the style of the book.