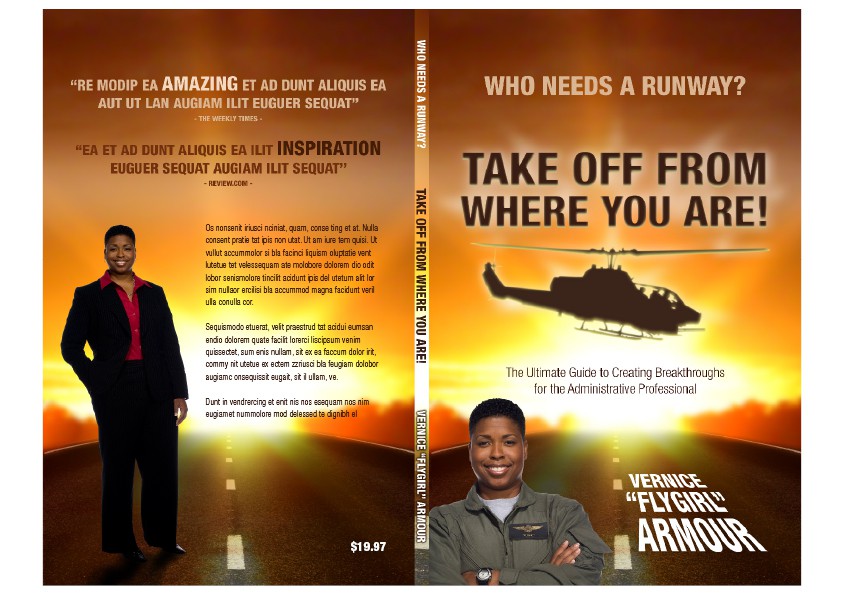 Who Needs A Runway?!?! Take Off From Where You Are! 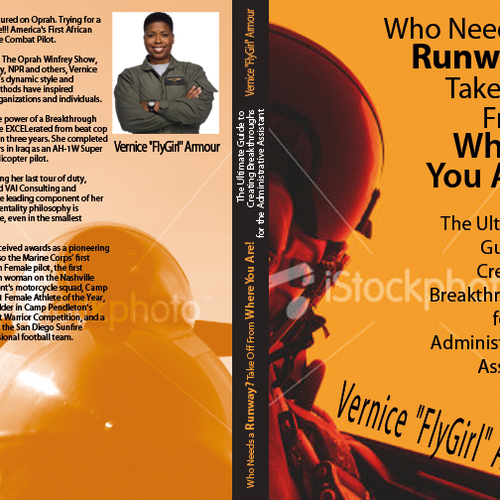 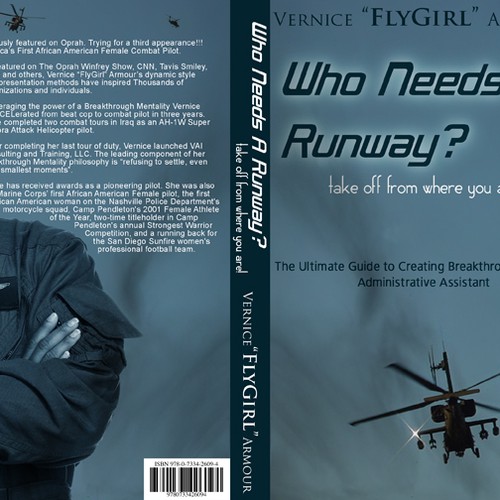 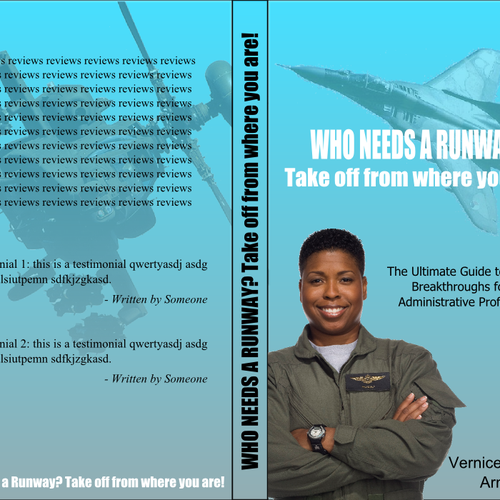 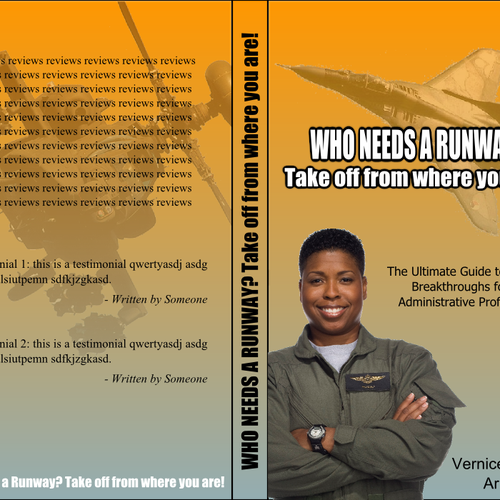 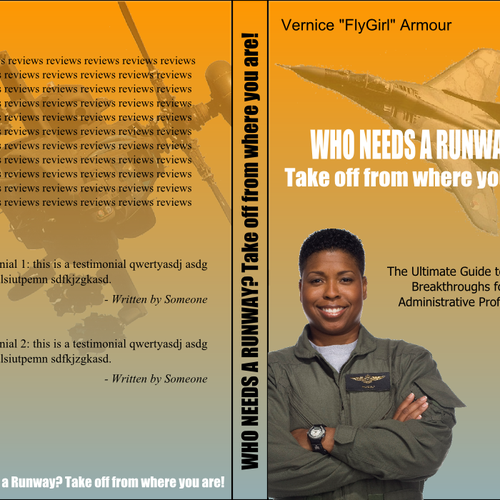 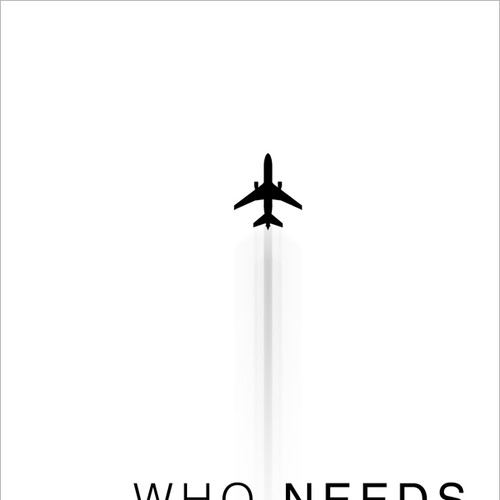 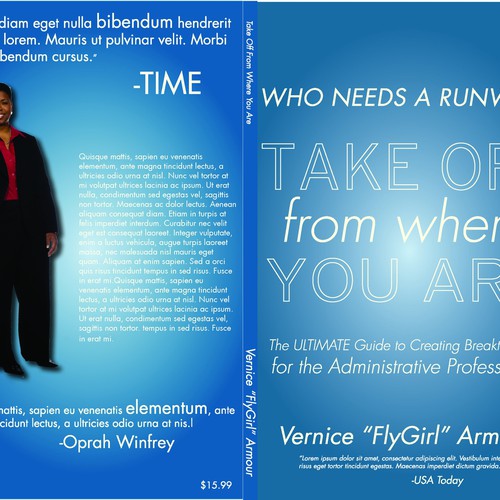 As featured on The Oprah Winfrey Show, CNN, Tavis Smiley, NPR and others, Vernice “FlyGirl” Armour’s dynamic style and presentation methods have inspired Thousands of organizations and individuals.

Leveraging the power of a Breakthrough Mentality Vernice EXCELerated from beat cop to combat pilot in three years. She completed two combat tours in Iraq as an AH-1W Super Cobra Attack Helicopter pilot.

After completing her last tour of duty, Vernice launched VAI Consulting and Training, LLC. The leading component of her Breakthrough Mentality philosophy is “refusing to settle, even in the smallest moments”.

Vernice’s signature book, Zero to Breakthrough™ (Penguin) is due for release in the first quarter of 2011.

Willing to pay a $50 bonus if I select your design before the close of business today (29 June) !!!

Quick adn easy. I need a clean crisp book cover design. Title of the book is Who Needs a Runway? Take Off From Where You Are! Subtitle: The Ultimate Guide to Creating Breakthroughs for the Administrative Professional

I am totally open to all ideas. I don't want anything cheesy looking. Leave space for a book review and testimonials on the back. Room for one testimonial on the front.

The covers on the first page of http://bookcoverarchive.com/ look professionally done. The attachment shows examples of what I DON'T LIKE!

Logo needed. Guaranteed selection!
$ 299
We build infrastructure in the oil and gas industry. Our target audience is our customer, exploration and production com
54
entries
10
Designer
Help a Broker Dealer Change the World
899 US$
We are an online brokerage firm that will pay its clients to trade with us, and allow those payments to be donated direc
178
entries
91
designers
Design a logo for Interior Design Studio
$299
The main activity of my company is interior design of houses and flats. Full range of services from measurement to the l
117
entries
27
デザイナー数
Auto Service Business Brand Identity
US$ 899
Rick Carey is an iconic individual within the classic car world. Rick's spent the last twenty-nine years (since 1991) o
158
entries
23
designers
Logo for Teutonic Sports. Manufacturing fitness equipment. Teutonic Cross shield&teutonic helmet.
EUR 359
Manufacturing Fitness Equipment. Competition to Rogue and Eleiko and other big brands in the fitness Industry
51
entries
15
diseñadores
The Sleep Guru
£ 239
We provide workshops, talks, workshops on sleep
36
entries
13
designer

Jetzt starten
Banner design for a Bare Metal Cloud computing company
599 $
We are a Bare Metal Cloud platform. Our target audience are Gaming, Streaming, CDN, VPN and Web Hosting companies. For t
41
entries
19
Designer
Money Bags App Icon
USD 199
We are an iOS to do list app where users track their annual income and do tasks to increase that income.
25
entries
11
diseñadores
Create a logo for podcast dealing all all stages of one's romantic life: dating, marriage, divorce
USD 299
singles, married, and divorcing individuals
74
entries
18
diseñadores
Need vintage logo!
299 $US
Strength Sports
45
entries
11
designer graphistes
Dear Woman In Process, Logo
USD 299
Dear Woman In Process, mission is to give women language for their now by helping them navigate through their heart, min
19
entries
5
diseñadores
The Gecko Garage - New York Crested Gecko Breeder
USD 299
I am a New Caledonian gecko breeder however i work most with Crested Geckos selling high quality animals across the US,
85
entries
15
designer
Erfahren Sie mehr über anderes Design
So funktioniert's