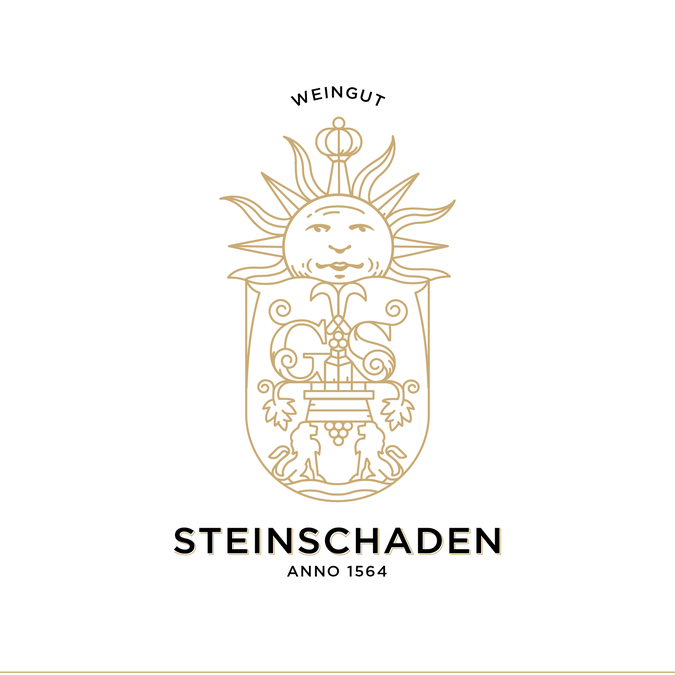 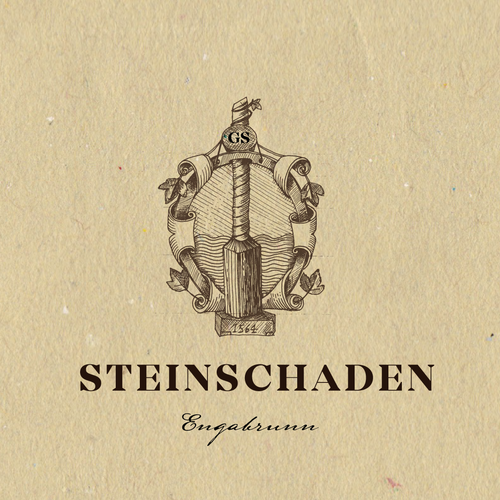 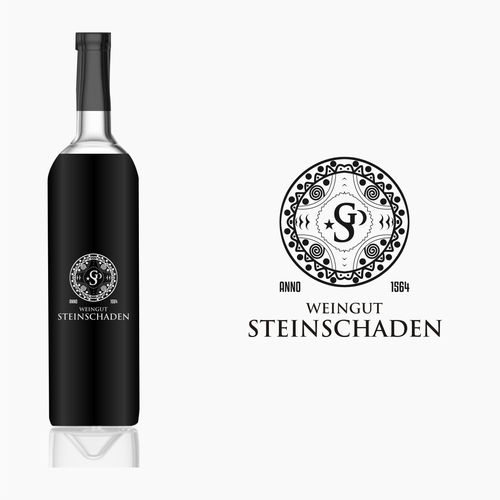 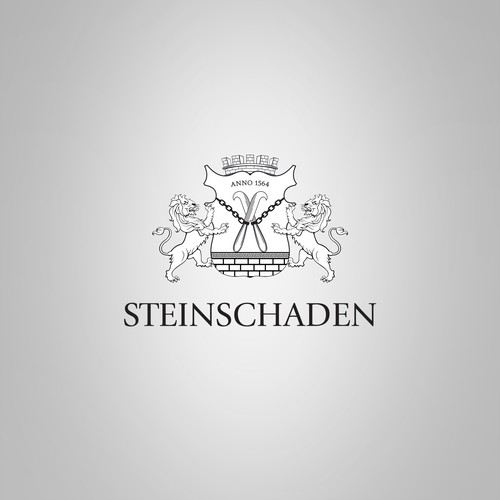 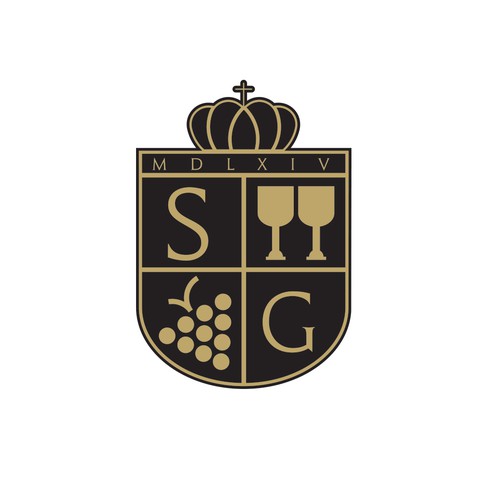 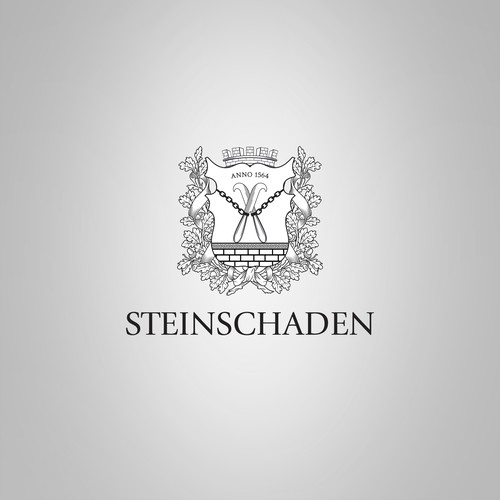 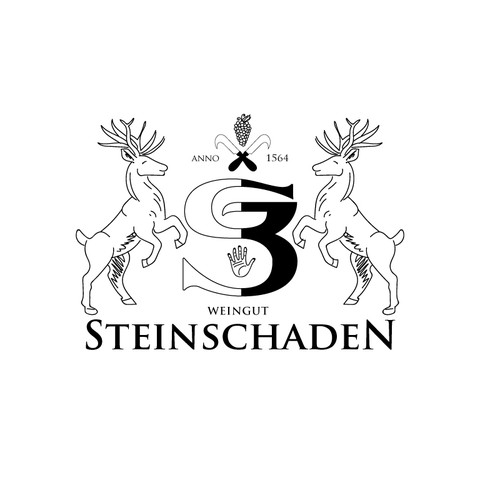 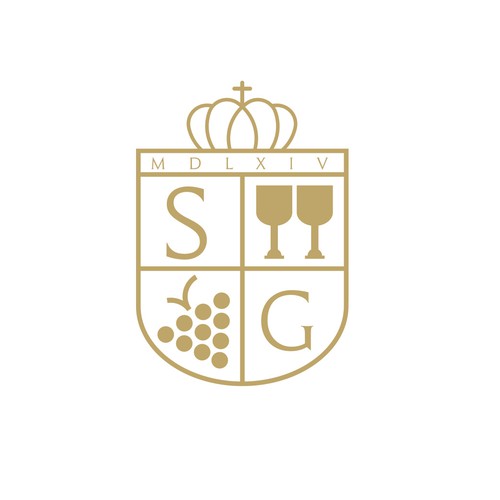 We are a family owned and family run winery in the Kamptal region in Austria. Most of our wines are white wines (especially Grüner Veltliner) We sell our wines to nearly whole Europe and to the United States. As we sell most of our wines through traders we have all kinds of ages. As we do not sell cheap bulk wine our costumers are quite high sophisticated in matters of wine.
We own the oldest wooden winepress in the german speaking world (built in 1564) and also our roots go back to this date – always connected to vinyards and wine.

As we (the winemakers and CEO’s) are 2 young cousins (middle 30s) we we want to change our CI especially our logo with company name and a drawn emblem to modernize our brand.

Our old logo was designed in the 1970’s so it would be nice if this old logo could appear in the new logo in some way. We also thought about building a logo with several components as we, as a winery, are highly connected to the region where our vineyards grow - you could use things like the winepress, or only parts of it or also drawings from the photos we have enclosed. We also enclosed a logo which we both like very much although of course our new logo should not be too similar.
We would like to have the logo not too technical, as our profession always has to do with handcrafted things also the logo should communicate this handcraft and should not be too technical and too clean. Also slightly mystical elements could be fine. (fabulous creatures, moon, stars, and so on)

In the end it should show the skills, mystery, nature, tradition & ingenuity, origin and our love & passion which are mandatory to make good wine!

We are very keen on nice fonts – so the name Steinschaden and the used font is very important for us. But it should not be too funky.

For us it would be also Okay to see only drawings and drafts of the logo itself in the first round of the competition.

We have enclosed a sheet with logos we like and we also enclosed some pictures of the village like the "fuenfeckigerstein" which is a stone with 5 sides which marks the place were 5 villages meet. By the way, our name also has to do with Stone. We also enclosed pictures of the old press and crests from the village church. Also there is a picture of the "Grafenegger bull and giant" a statue and legend in the near of Engabrunn - The name of our village, were all our vineyards are situated, is Engabrunn which comes from the medieval name of a fountain/well because several waterwells arise from Engabrunn.

Design a Logo for a Coffee Brand
US$299
We sell high end coffee. Our company is along the Huron River, so I wouldn't mind if there was some kind of representati
98
entries
29
diseñadores
Come on, Maggot Brain: Design a logo for a funked-up hot sauce company
$299
Hot sauce (and related spicy foods) company with a 1960s and 1970s hard funk music theme. Small-batch, all-natural produ
91
entries
22
designers
Foodie Logo ... Are you hungry?
299 US$
Walking food tours of Greenville, South Carolina visiting unique (mostly one of a kind) establishments to introduce part
41
entries
16
designers
JC express LOGO !!!!!!!!!!!!!!!!!!!!!!!!!!!
US$ 299
JC express is a convenient store, which has the best prices possible
76
entries
17
designers
Cooking up a Good Design? Cookbook Publisher needs a new Logo.
US$299
We publish cookbooks. Primarily regional cookbooks. They are all comfort, home cooking recipes for everyday cooks to p
63
entries
16
designers
Bold and Powerful Logo for Damn the Torepedoes
299 US$
We produce craft beverages, specializing with coffee and tea. The Damn the Torpedoes is based on a Civil War battle at
34
entries
10
diseñadores