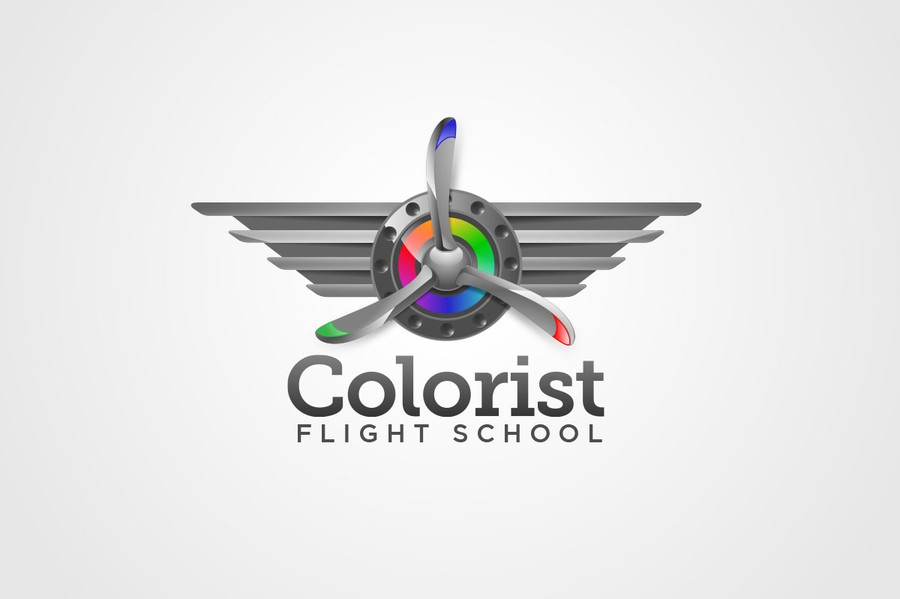 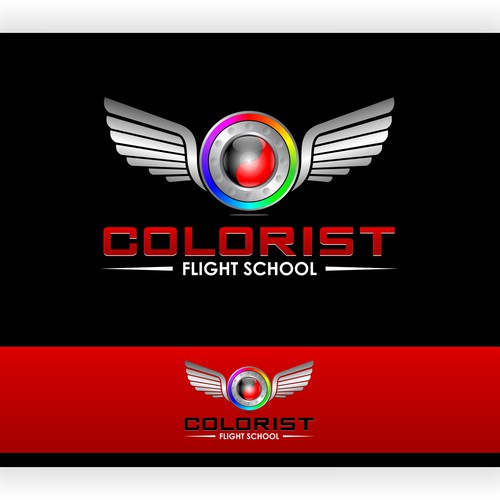 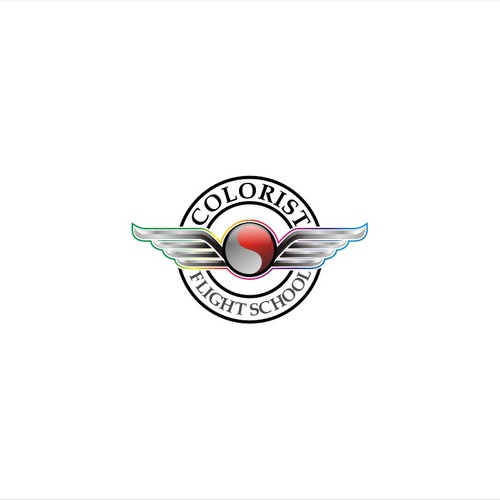 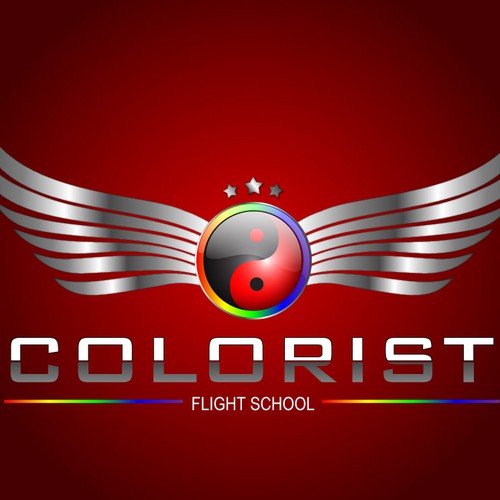 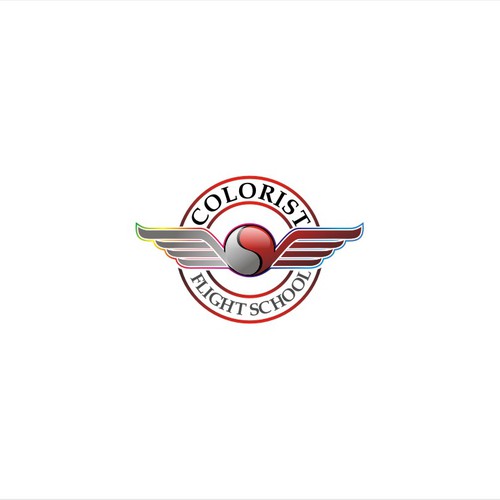 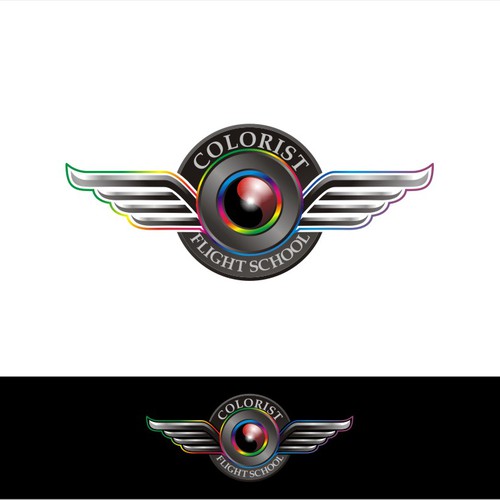 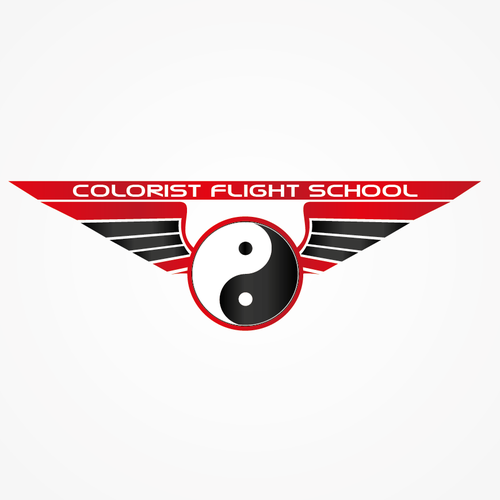 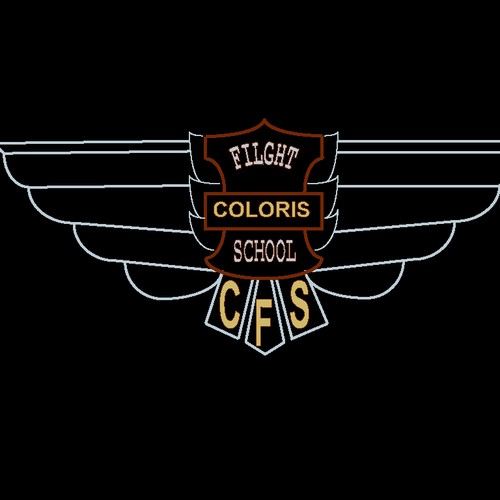 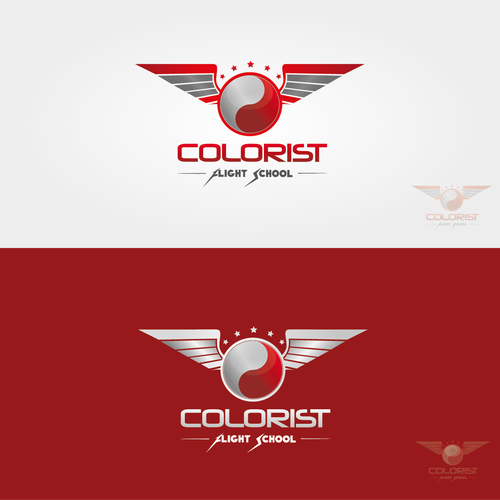 This logo will be used for an online video-based training system for television & film post-production professionals who are frustrated when they color correct images. It is part of a larger website, TaoOfColor.com - dedicated to promoting the technology and craft of digital color correction for moving images.

I've developed a 3-stage training system where, through video tutorials, I teach 'the instrument panel' (the software), I put customers in a 'color correction simulator' (by providing a short film that they can download and color correct at home) and then follow up with personal instruction (they send me the project file of their color correction and I record a 5-minute critique giving them actionable areas of improvement and supportive statements of what they're doing correctly).

This training is being repackaged using the metaphor of a Flight School teaching would-be aviators how to fly a plane... except we're teaching colorists how to professionally 'fly' their software and put them in real-world situations to help them practice their craft.

I'm looking to develop a Logo for a sales page to reinforce the notion of 'Colorist Flight School' for this sales page:
http://training.taoofcolor.com

I open to any creative interpretation of the notion 'Colorist Flight School' that supports the metaphor of a flight school for digital artists learning how to professionally color correct moving images. Just be aware that it needs to sit on a sales page and I'd prefer it be more horizontal than vertical.

Here are a series of images showing the type of color wheel interfaces used in professional video color correction software - feel free to use them for inspiration:

I'm not necessarily married to the Yin-Yang element suggested in the design brief... but I do want this wing design to incorporate an element of the color wheel or varied hues and brightness values.

RE: Name In Logo - I'm of mixed opinion if I want a name in the logo, since I see this is more as a 'brand mark'. If you do use the text, consider incorporating the acronym 'ToCG' since the name of the overall site is TaoOfColorGrading.com (or the shortened version: TaoOfColor.com)

In the end, I just really want to support the notion of Flight School for Video Colorists and the logo should support that. It should feel like a serious endeavor.

Final Deliverables: I'd need a Web and Print version, including a Vector-based one for a 3D graphic animation - both with text treatments as independent layers.

Here's my rather literal interpretation of what I think I want (see the attached file for a rough mockup) . . .

I'm thinking the core Logo should have two elements:

1. Wings - similar to a pin that a pilot might wear:
http://www.harburn.com/wings.shtml

The wings themselves should feel modern and sleek, not feathery or angelic. Abstract but functional. I like the lines in these photos:http://doyoulovewhereyoulive.com/ar

2. In the middle of the wings goes the Yin-Yang symbol. Here's the symbol:
http://en.wikipedia.org/wiki/File:Y

UPDATE: Having seen a few different designs - I don't like the dots at the center of symbol. If you're going to use the Yin-Yang symbol, my advice is to go more with something like #5 . The shape of the line in the symbol is enough to get the point across. The dots seem to be one element too much (unless you think you can make it work).

The Yin-Yang symbol needs to reinforce the concept of Color Correction. My initial thought is to use the color wheel as inspiration, perhaps the one half of the symbol with light values and the other half of the symbol with dark values. I'm also thinking rather than being a literal interpretation of the color wheels that they be more like ink in water or swirling clouds of color:

- but without losing entirely the notion of a color wheel.

When it comes the Yin-Yang logo, I'm very open to ideas and interpretation.

New Logo for Music Business Related Business
399 A$
We help musicians, Indy record labels, record producers, and managers sound better, grow their careers, and learn the mu
146
entries
24
designer
A classy, cool logo for Bankrollbets.com
299 $US
We are a website that offers advice on which team to pick for sports bettors by using a technologically advanced AI syst
37
entries
18
designer graphistes
Logo needed for SATIRE NEWS web site (like The Onion!)
399 CA$
Our client is a funny, slightly snarky regional satire web site that "covers" the news with a style very similar to The
43
entries
14
Designer
Design a cutting edge logo for Stage Door Theatre Co.
299 US$
We are a theatre company based in small town in northern Michigan. Our target audience is theatre goers and patrons of t
88
entries
23
diseñadores
Design a Chill Logo for Chill Press!
600 CA$
We at ChillPress.com are an entertainment based website looking back at a variety of films, television, and games from t
617
entries
125
Designer
Create a logo for an exciting new TV production company!
$299
Our organization is a television and movie production company. Our audience is primarily studio executives, and also our
84
entries
23
デザイナー数

Jetzt starten
What’s up Doc? A need for a memorable logo.
USD 299
Singer songwriter- audiences are people who like acoustic folk, blues, and pop guitsr and vocals
10
entries
5
diseñadores
Logo for Film Industry App
299 US$
​The product is an App for iPhone. The App shows the roles of the casting​s available for the actors. The Name of the A
170
entries
59
diseñadores
Event & music festival agency "Carter House Productions"
US$299
We are a young, creative agency that does live event ideation & production. We do everything from music festivals to la
123
entries
37
diseñadores
Design logo for Audio/Music Production house
AUD 399
Sound Studio specializing in post-production, indie film and game sound design, electronic music production and educatio
274
entries
80
diseñadores
BRM.Events
269 €
for the brands brm.video and brm.media we already have logos. we are still looking for a matching logo for brm.events. I
35
entries
14
designer
JL Entertainment (bounce house rental business)
$299
We rent inflatable bounce houses and waterslides. Our main target audience is mainly kids.
21
entries
7
デザイナー数