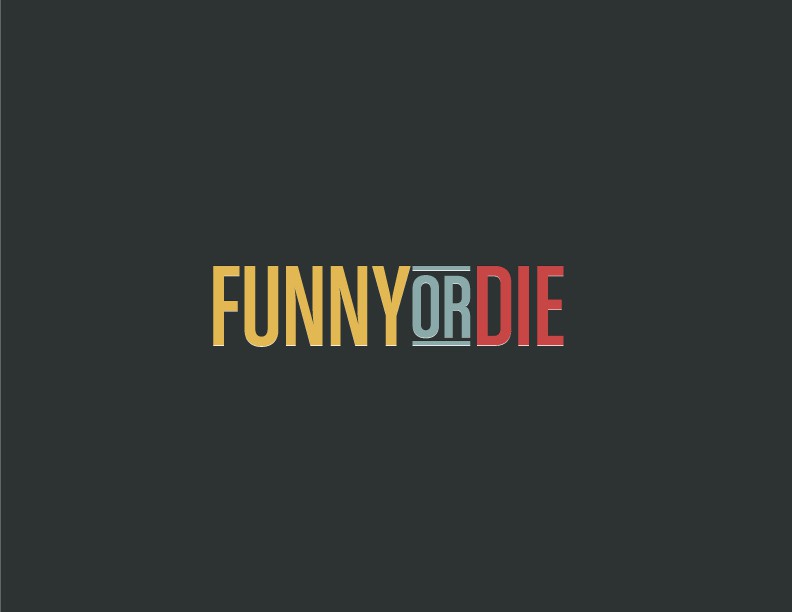 Create the next logo for Funny or Die!!! 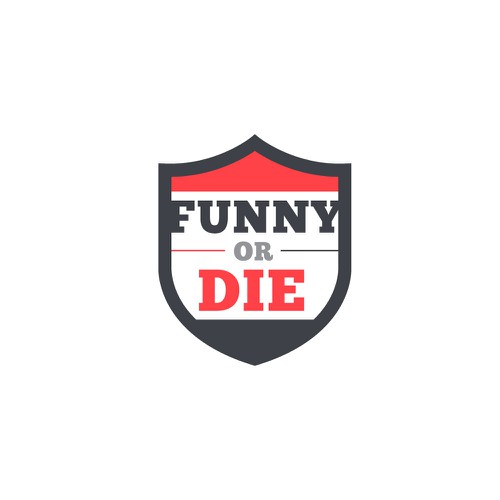 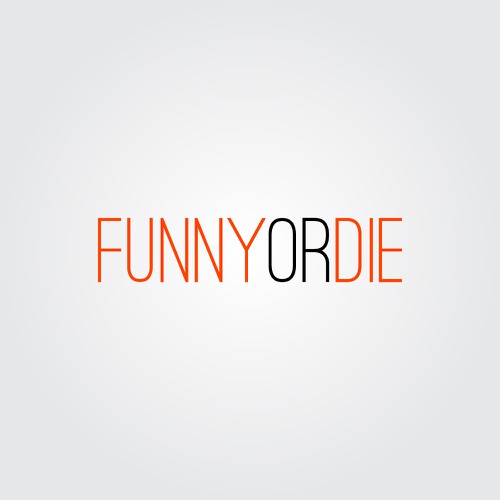 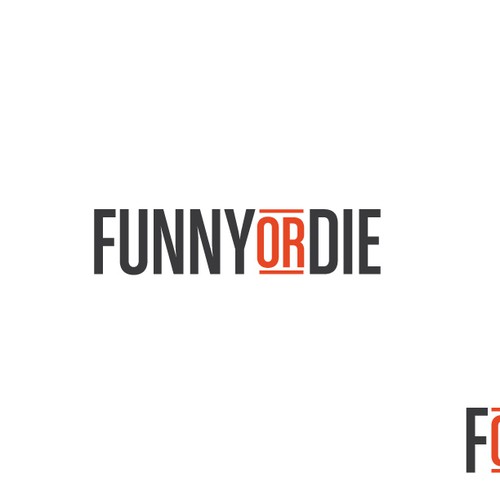 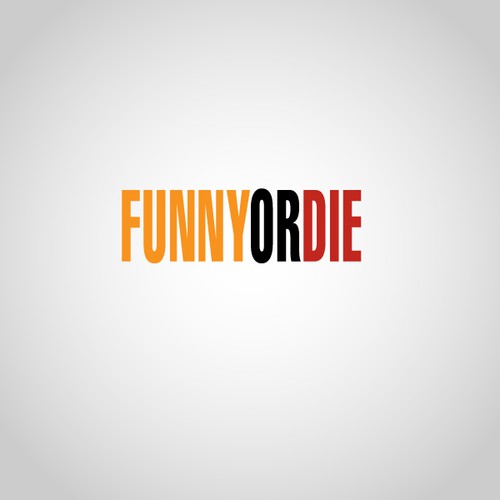 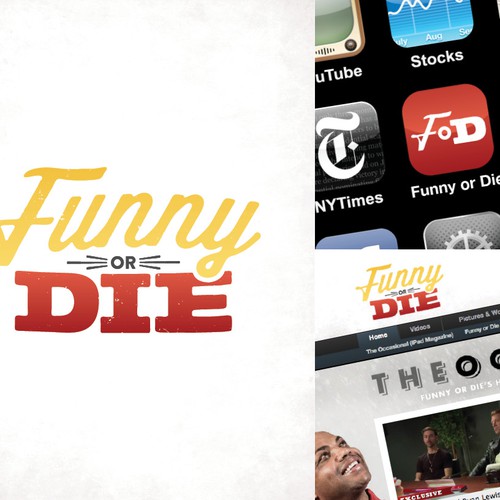 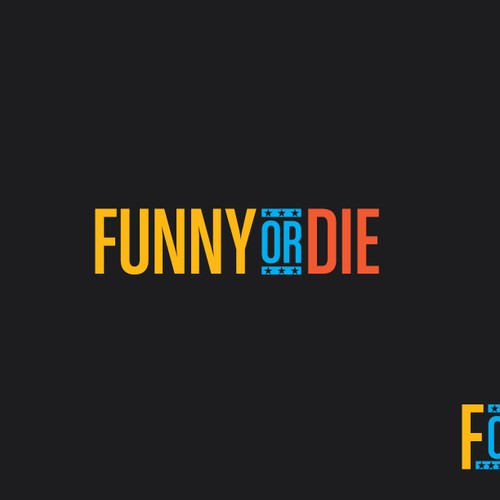 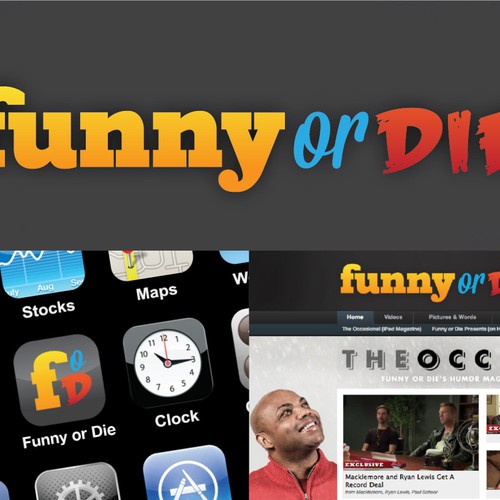 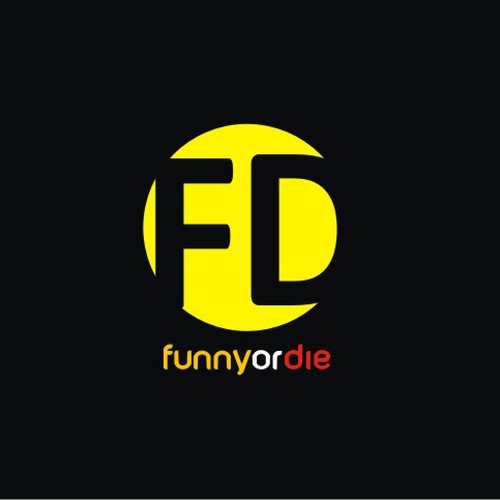 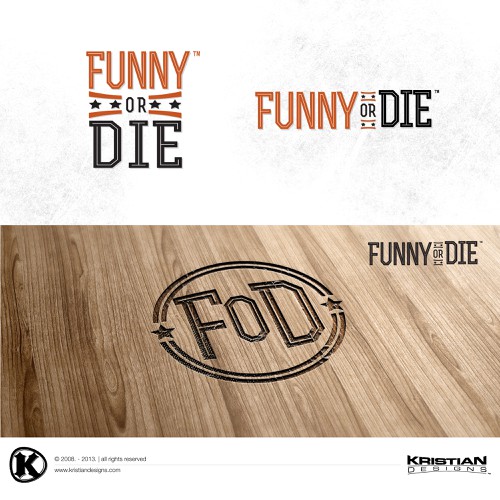 None - please also stay away from funny or die symbols. No smiley faces, tombstones, etc.

We are a digital studio that produces comedy content for the web, apps, live events, TV and the big screen. Our brand was established in 2007 with the launch of the Funny Or Die website with help from our celebrity founders Will Ferrell and Adam McKay. Our properties include:

Live:
-“Will Ferrell’s Funny Or Die Comedy Tour Presented by ‘Semi-Pro’” hit The eight-city tour sold out eight college campuses
- Funny Or Die University is a 2013+ initiative through which Funny Or Die will partner with film schools at major universities
- Assorted events such as the “Billy on the Street Premiere,” the “Funny Or Die Live Holiday Party, 2010,” SXSW and other conferences.

We're interested in seeing a few different ideas for this next logo:

1) Use our existing logo but modernized or stylized in some new interesting way.

2) A brand new logo, using just the name (no symbols)

Funny Or Die is:

If Our Brand Were A Movie…
We would be the 2004 film “Anchorman: The Legend of Ron Burgundy.” The movie is a complete original that was unexpected by audiences. The amazing cast of celebrities and the fearless approach to comedy make Anchorman hilariously funny. Unlike some other comedies, Anchorman doesn’t overreach or work too hard to be funny. Instead, the movie is full of “earned laughs.” What’s more, the humor in Anchorman has an evergreen appeal. In fact, Anchorman is one of those movies that gets better the more you watch it.

Surfing Hemingway Logo for Adventure Journal Needed!
299 US$
Adventure Writer, Journal, Web-series. http://kelpmagazine.com/
10
entries
2
designers
143 Boz Logo
$499
105
entries
31
デザイナー数
Design a distinguished powerful logo for a movie production house
US$ 299
The company name is Yoddhas Entertainment. "Yoddhas" means Warrior in Hindi, the most common language spoken in India. W
99
entries
16
designers
Design a cutting edge logo for Stage Door Theatre Co.
299 $US
We are a theatre company based in small town in northern Michigan. Our target audience is theatre goers and patrons of t
88
entries
23
designer graphistes
Design a Chill Logo for Chill Press!
CA$ 600
We at ChillPress.com are an entertainment based website looking back at a variety of films, television, and games from t
617
entries
125
Designer
Logo design for Music label
CHF 309
URBAN MUSIC
148
entries
40
diseñadores

Jetzt starten
Design a creative and playful logo for Guitarsumo
$299
Everything about guitars. We're an Amazon affiliate site and we focus on beginners who are interested in getting a new g
72
entries
34
デザイナー数
Your help is required. Our social brand needs a logo!
269 €
We are planning to launch a T-Shirt Brand which has some social and emotional aspects. We would like to support social p
99
entries
16
designer
Clean, classic logo with sharp lines for AGENCY X
US$499
We are a high end Media Agency that communicates quality and prestige with inspiring visuals, compelling stories, and in
121
entries
43
diseñadores
Logo for The Beat
499 $
The Beat
135
entries
27
Designer
Logo for Hollywood stunt company
£ 239
This company does specialist wire work and rigging for the stunt industry. We set up the Stunts for the stunt coordinato
70
entries
17
designers
URBAN MUSIC ENTERAINMENT RECORD LABEL LOGO
299 $
WE ARE AN URBAN MUSIC GROUP. THAT FOCUSES ON HIP HOP & LATIN MUSIC. THIS LOGO WILL BE USED FOR MUSIC PROMOTION AN CLOT
33
entries
16
Designer