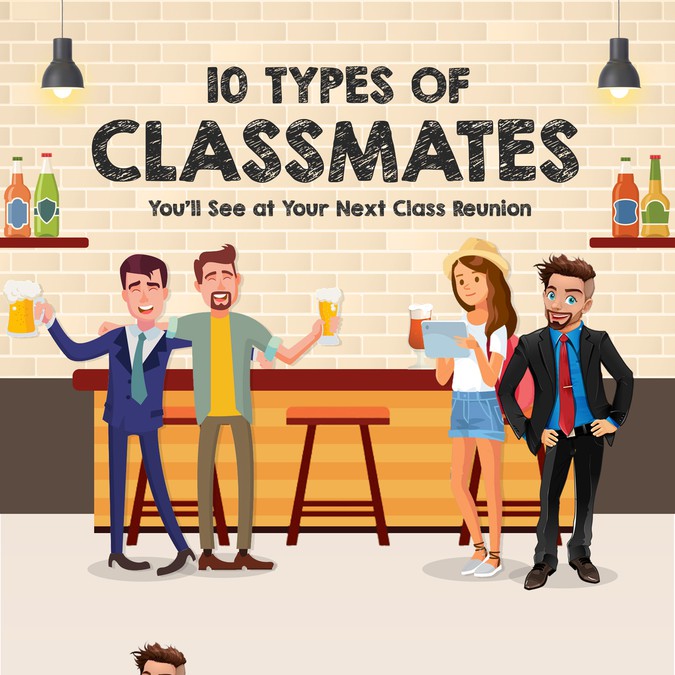 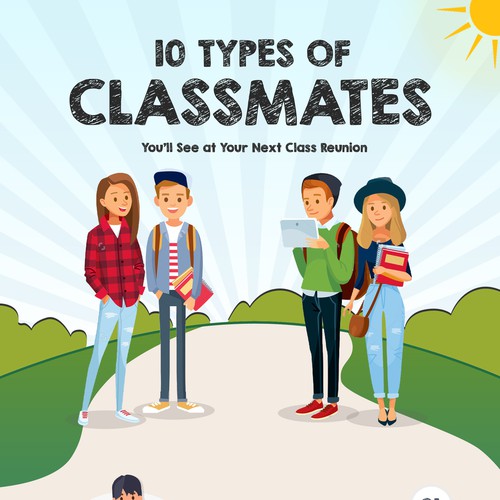 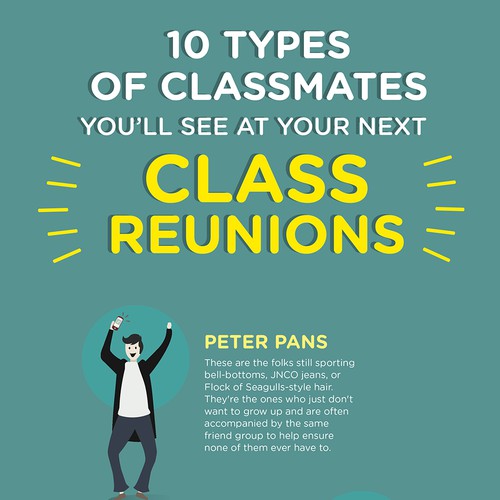 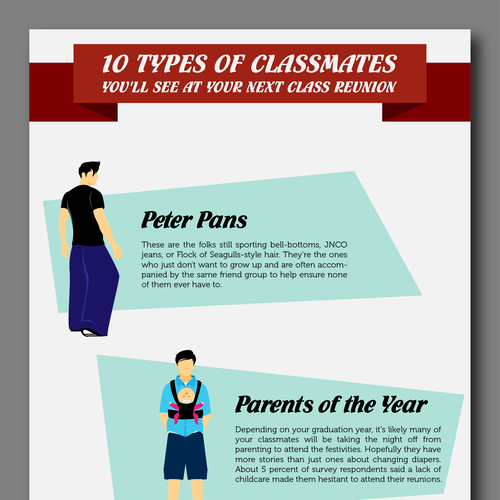 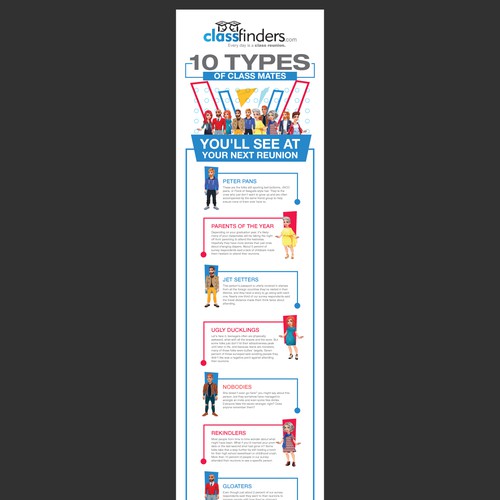 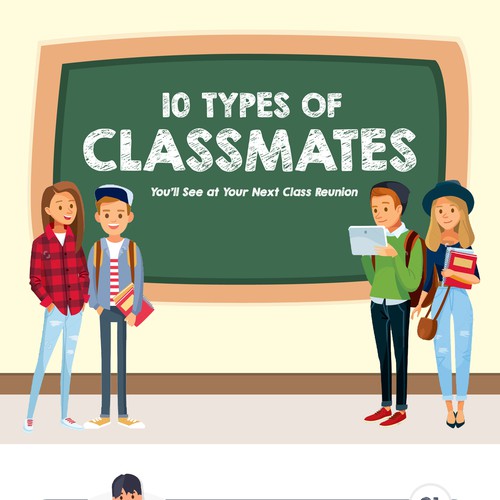 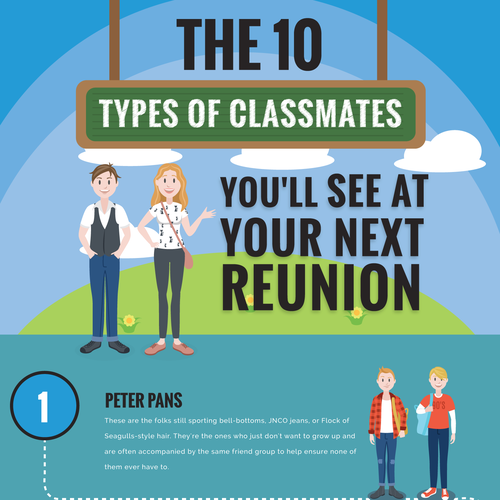 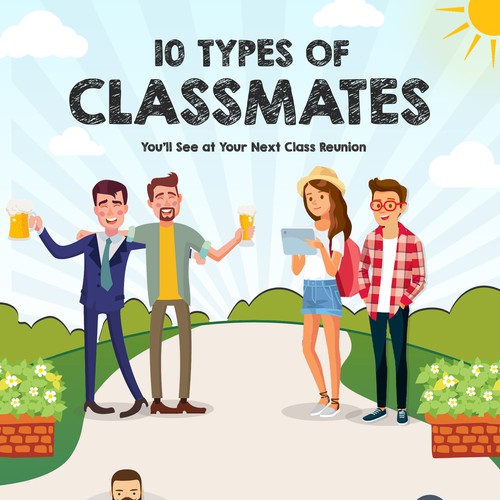 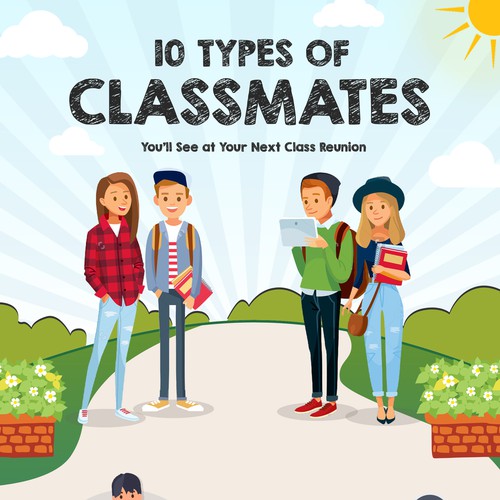 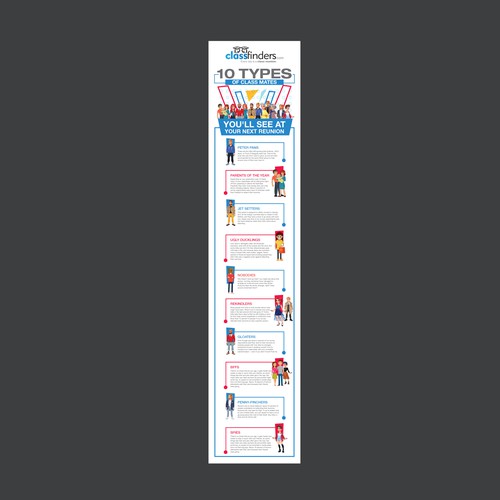 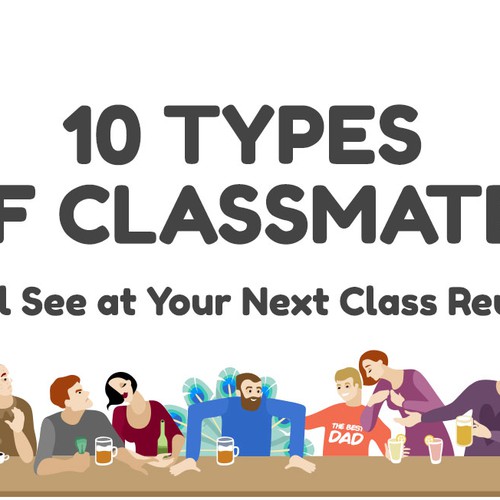 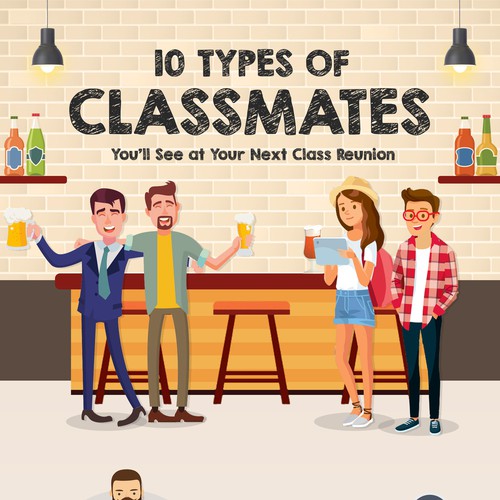 The 10 Types of Classmates You'll See at Your Next Reunion

We want an infographic that illustrates the 10 types of classmates that you may see at your high school reunion:

10 Types of Classmates You'll See at Your Next Class Reunion

Peter Pans
These are the folks still sporting bell-bottoms, JNCO jeans, or Flock of Seagulls-style hair. They're the ones who just don't want to grow up and are often accompanied by the same friend group to help ensure none of them ever have to.

Parents of the Year
Depending on your graduation year, it's likely many of your classmates will be taking the night off from parenting to attend the festivities. Hopefully they have more stories than just ones about changing diapers. About 5 percent of survey respondents said a lack of childcare made them hesitant to attend their reunions.

Jet Setters
This person's passport is utterly covered in stamps from all the foreign countries they've visited in their lifetime, and they have a story to go along with each one. Nearly one-third of our survey respondents said the travel distance made them think twice about attending.

Ugly Ducklings
Let's face it, teenagers often are physically awkward, what with all the braces and the acne. But some folks just don't hit their attractiveness peak until later in life, and because teens are monsters, many of those folks were bullies' targets. Seven percent of those surveyed said avoiding people they didn't like was a negative point against attending their reunions.

Nobodies
"She doesn't even go here!" you might say about this person, but they somehow have managed to wrangle an invite and even some free drinks. Everyone likes the exotic stranger, right? Does anyone remember them?

Rekindlers
Most people from time to time wonder about what might have been. What if you'd married your prom date or the last-second shot had gone in? Some folks take that a step further by still holding a torch for their high school sweetheart or childhood crush. More than 10 percent of people in our survey attended their reunions to see a specific person.

Gloaters
Even though just about 2 percent of our survey respondents said they went to their reunions to impress people with how they've changed, everybody knows it certainly couldn't hurt to impress your classmates with your incredible transformation -- even if you didn't invent Post-Its.

BFFs
There's no doubt that as you age, it gets harder and harder to stay in touch with your friends, as dumb things like kids and jobs often get in the way. But many folks use class reunions as just another night at the bar, so expect to be immersed in inside jokes from not that long ago. About 19 percent of reunion attendants said they went because their friends were going.

Penny-Pinchers
Second only to travel distance, about 23 percent of people considered not attending their reunions because the cost was too high. If you're seated next to one of these folks, you can expect to hear a lot of grousing about the cost of their ticket. Buy them a drink and all will be well.

Spies
The most common reason people said they attended their class reunions was to see how people have changed (22 percent). As if gathering intelligence, the spy will draw life details out of their classmates like they are collecting state secrets.

We want this infographic to have the 10 personas be cartoons/illustrations. Very similar to this:
https://www.allareacodes.com/7-type…one-users/

There are 10 personas that we want included they are in the data above but are:

We want an infographic that has the content and design, and the ability to break out each persona from the design (so separate images of each persona).

Tell a story to inspire people about video logging
GBP 599
Mindlogr is a private video logging platform that provides people with a mechanism and cloud based service to record ...
58
entries
16
diseñadores
Create an Infographic detailing Google's acquisition history
£ 599
QueryClick is a leading UK search agency that uses a blend of Search Engine Optimisation (SEO) , Paid Search and Conv...
33
entries
9
Designer
Single-page infographic: visualizing a 15-step development flow
€1,199
We develop internet solutions at the intersection of technology and marketing (websites, web shops and web portals).
92
entries
28
designers
Create a stunning infographic: quitt.ch | This is how the Swiss clean
€850
With quitt.ch, the online service of ServiceHunter AG, you can set up a private employment relationship with a few cl...
25
entries
10
designers
Blind date theme infographic
369 £
Majestic is an online data provider allowing users to analyze websites for SEO and Digital Marketing ....
25
entries
12
designer
Infographic about how people use ApplePay, Square, PayPal, etc.
$2,499
We are a site that offers advice on personal finance. Our target audience is really anyone who is looking to save mon...
28
entries
9
designers