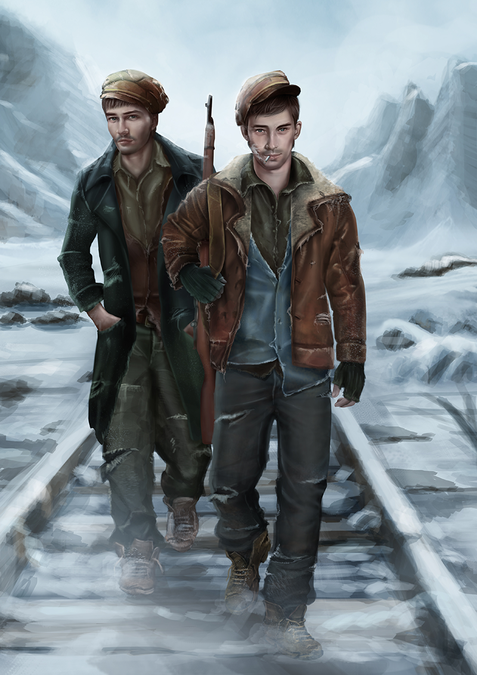 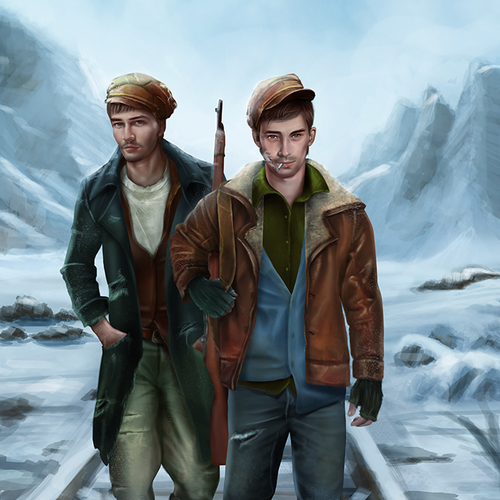 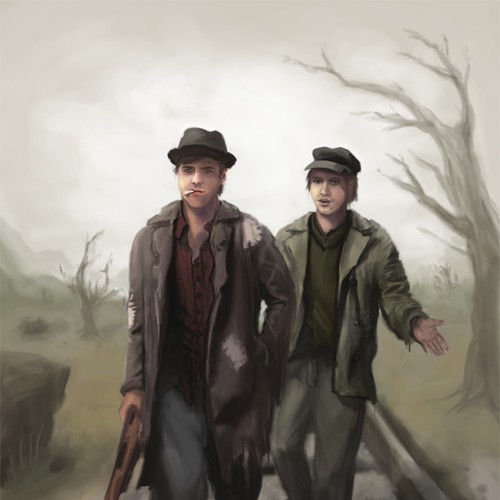 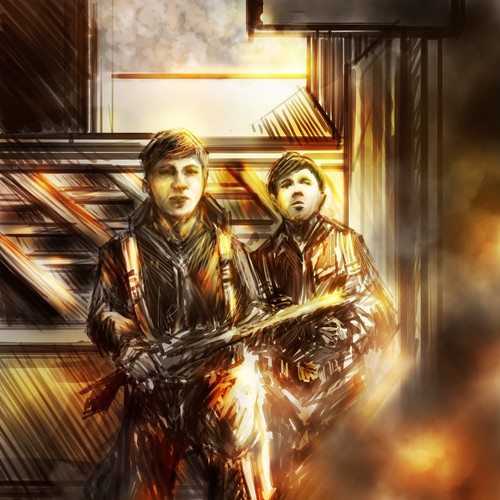 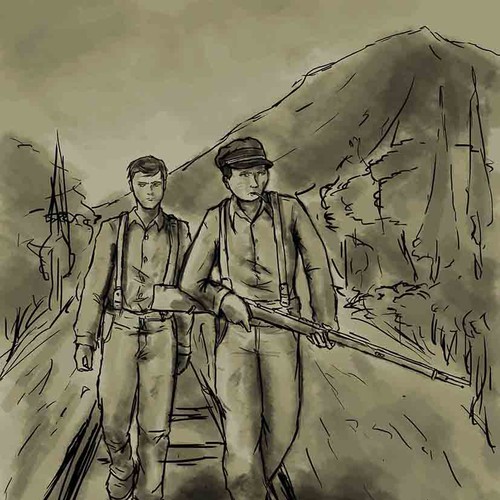 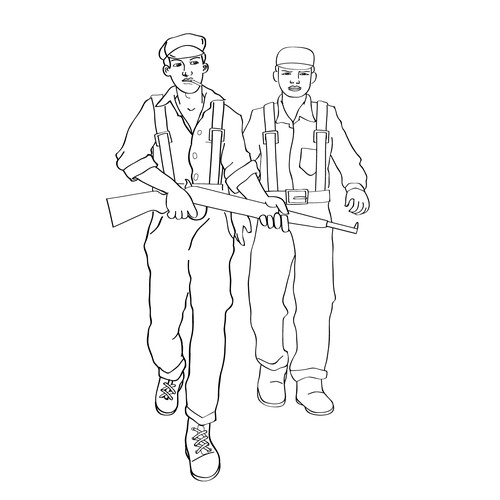 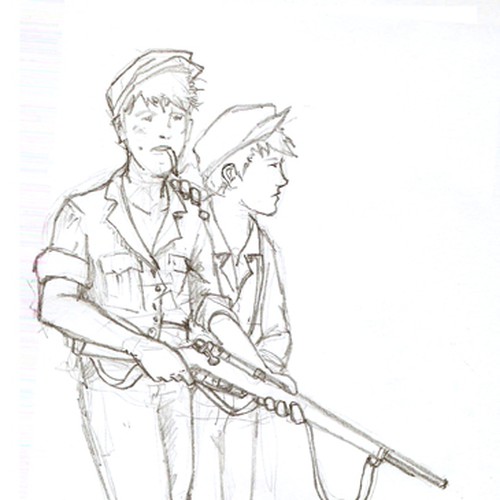 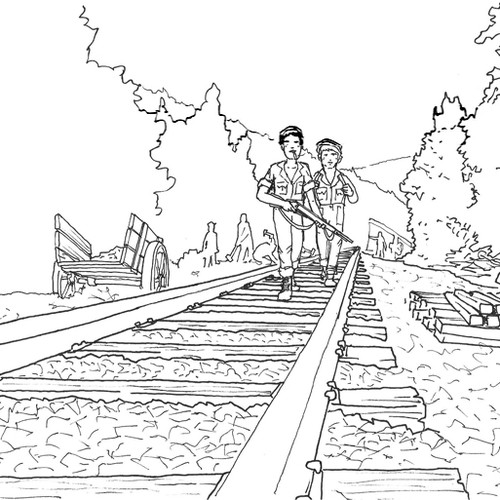 See below some new pictures and comments... for the jackets make them look completely distressed/handme down - holes, lining hanging out etc... ragtag held together messy old...

Firstly thanks for putting so much time into this. It is really interesting to see what comes from such little direction and wanted to see what came from individual thought and creativity. For the final image Im going to get a bit more specific. and provide detailed character Bio's to help influence the work even more. Also please not that my comments to individuals are specific to that design and have chosen each and every one of you because I like your original approach to the picture...

Below are some ideas that I thought out over the last few days... The moments you have originally captured in style and energy should not change... but I will give specific notes to every one regarding their own work. Please don't take notes from each others work as I love the individual approach and everyone here is on the right track in one way or another.

Thanks once again for the work.

unpredictable at times and absolutely obsessed with avenging his father death, which occurred 13 yrs ago, where his father’s bravery ultimately lead him to being shot.
He has a strong relationship with
his best friend BOY2 , who he frequently refers to as ‘brother’ and together
they develop a strong passion for the BOLSHEVIK movement led by Lenin, which
resulted in the setting up of the first Communist state in Russia.  BOY 1 is haunted by his past every day
and is incredibly poor, working hard to keep his mother alive, By acting as a 'safety shooter' protecting nearby workers from the very active threat of wolves He hates theRICH , and is ready for war if it can bring him closer to a freer, fairer
society.  He is good looking, an
alpha male and good with women.  His confidence and charm easily attract those around him... Eventually he is convinced by his best freind BOY2 to join a revolutionary gang and execute a
murderous plot. He has a heart under his wounded
exterior and this shows for the first time when he meets and falls in love with a local woman.  This fate ultimately
decides his downfall and eventual death.

BOY 2 is like an older brother to BOY1. Though physically he looks the same age. He is equally dedicated to the Bolshevik cause as BOY1 is, but is more level-headed.  He is an intelligent kind person, and always puts other people before himself, especially BOY1.  His dedication to the cause is challenged as he becomes close to the very people he has been asked to kill as part of his revolutionary duties, and he tries to find a less bloody solution.  However, this is impossible and he has to deal with the fact that he participated in their bloody murder. Even to the end he tries to protect BOY1 and BOY1's mother, and in doing so he brings about his own death.

i have added some sketches below.

BUT that level of realism and detail would be great. detailed and lifelike

Boy1
One should be carrying a rifle (Used to shoot wolves from distance - protecting workers from an attack) He is slightly taller than Boy two and slightly broader in frame. He has a cigarette in his mouth and wears rag tag clothing dark rich greens, grey's, red's and perhaps back. Dirty broken tired boots. probably some sort of hat.

Boy 2
Is slightly behind boy one, no gun, no cigarette... similar clothing but more stable like. however he still manages to look reasonably well put together. His boots are equally as tired as boy 1's, he also wears a hat.

Background
(either plain)
or walking down a train track still being built.

Year
1908-1915
The boys are somewhere between bolshevik revolutionaries and regular townsfolk. poor... as clean as they can be given the conditions...

Expressions/character
Boy 1
plain faced, and focused looking forward and past us. He is listening to boy 2 speaking and is attentive but his eyes are piercing and looking on. He is driven by something

Boy 2
Is slightly more emotional... he has ideas, plans. though this doesnt need to be his expression... He could be looking directly at us as BOY1 looks on

Relationship
these boys are best friends. They would die for one another and do anything for each other. they have saved each others lives on many occasions and are a perfect team... together they feel they are capable of anything. and it turns out they are.

Boy 1 isn't pensive he is just looking on. there is a sense of accomplishment between them but also a slight present anxiety.

the pictures i will show are for clothing/time reference only... please do not take inspiration from their expressions unless they match what I have set out above. thanks!!!