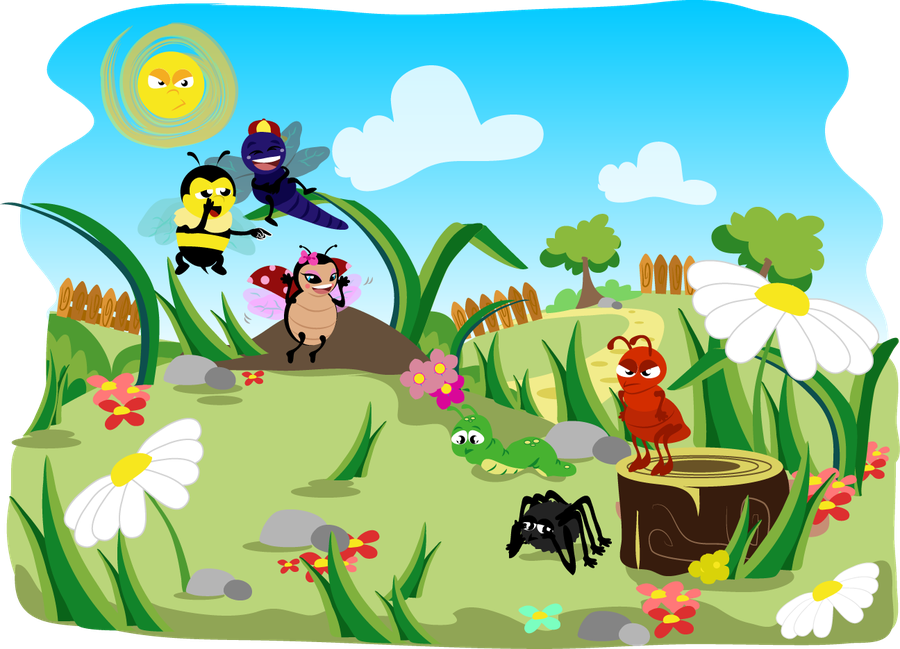 New illustration wanted for Bullies Be Buggin! An Anti-Bullying Campaign 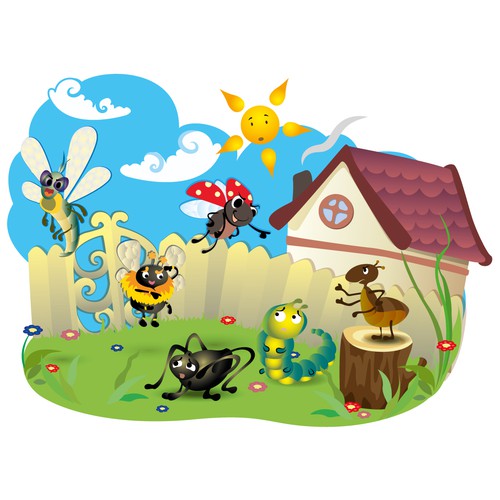 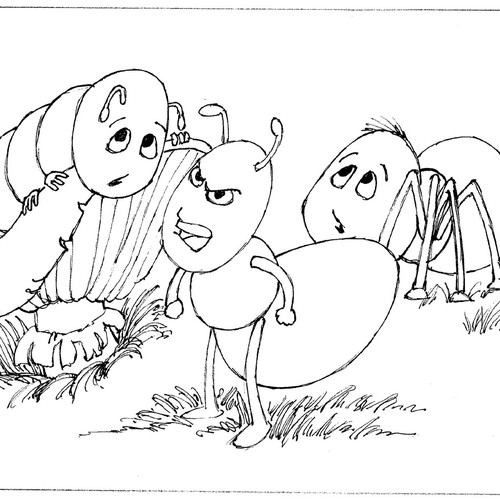 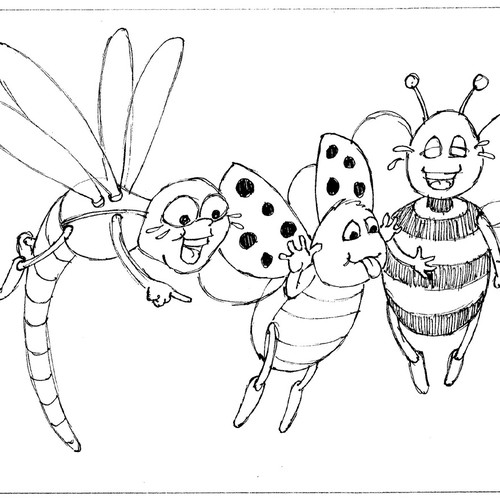 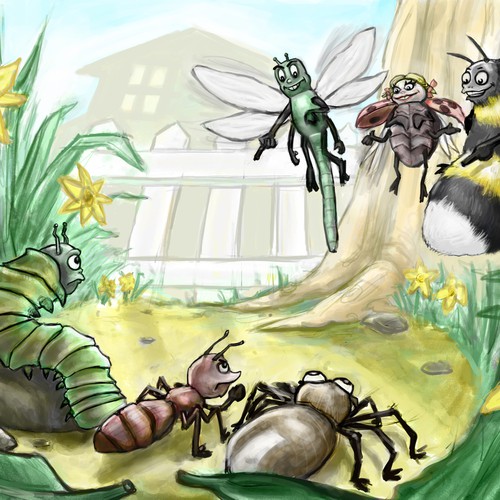 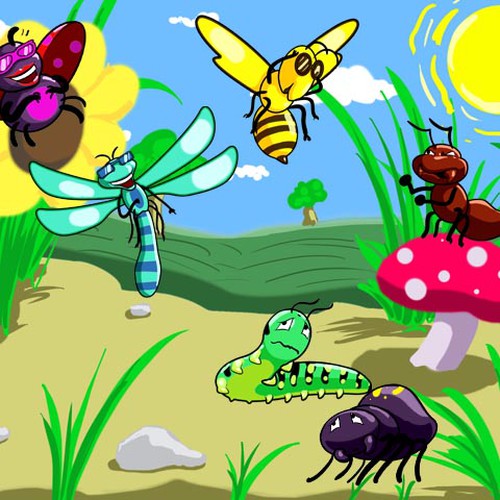 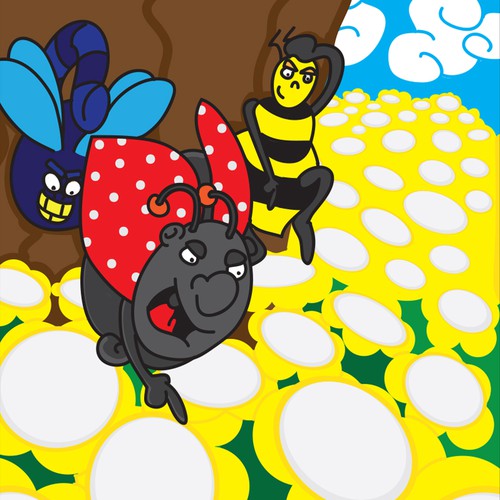 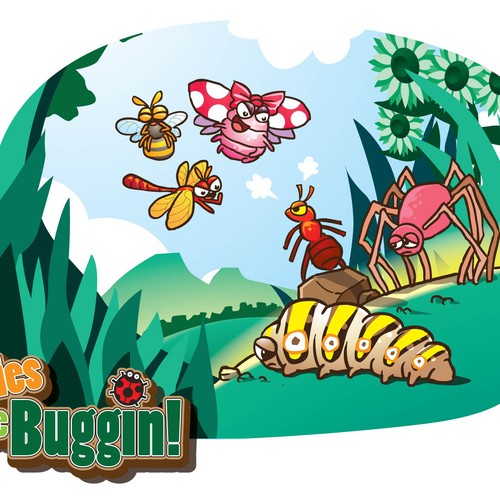 Through this book series, we intend to teach bullied kids and their bullies that every child is remarkable--we just need your illustrations to bring that truth to life!

Your mission:  Begin to illustrate "The Flyers and The Crawlers," the first book in the "Bullies Be Bugging" series, for a Kickstarter campaign we will launch at the end of this month.

Story Background: The book centers on flying and crawling insects. The flying insects (ladybug, dragonfly, and bumblebee) think that because they can fly, they're cooler and better than the insects that crawl (the ant, the spider, and the caterpillar). The crawling insects believe and agree, until something happens that completely changes how the flyers feel about them, and how they feel about themselves.

Round 1: Draw one illustration for each of the following scenes (2 illustrations in total):

Illustration 1: Show a ladybug (the leader of the flyers), a bumblebee, and a dragonfly flying in a beautiful garden, pointing and laughing at a spider, ant, and caterpillar crawling on the ground.

Illustration 2:  Close up of the ant, spider, and caterpillar, standing in a circle, the sad caterpillar and angry ant now trying to soothe the crying spider.

The Selected Finalists from Round 1 will move onto

Illustration 3: Show the same beautiful garden now engulfed in a rainstorm, the crawling insects nowhere to be found, and the flyers huddled together under something (maybe a leaf on a tree, or underneath a flower petal) trying to sheild themselves from the rain.

Illustration 4: A cover photo, embodying the story background. Whatever you choose.

Style:  Completely up to you as the illustrator, though we have three important directives:

1. The Flyers and the Crawlers should be set in an environment of large flowers, grasses, logs, etc, so that the magnified size of the insects are logical. Please refer to the attached pictures of Miss Spider's Sunny Patch Kids for an idea of what we mean. Please note how the grasses and flowers surronding the insects tower over them, and that the insects actually stand in a clearing. Please ask for clarity before you begin working if you are unclear about what we mean. We don't want anyone spending a minute of their time working in the wrong direction.

2. The ladybug should look girly. Not womanly or sexy--large colorful eyes with long eyelashes, hairbows, ribbons, pink polka dot wings, whatever you come up with that signifies a little girl.

3. The ant should be smaller/shorter than the other insects.

Goal: With the funds raised from this campaign, we will do two major things: Pay the chosen artist to finish the remaining 8 illustrations for the book (pending a mutually agreed upon price), and print the first set of 1000 books.

Stretch Goal: We have two additional books in this series that we need illustrated. We prefer character consistency, so we'd really like to work with the winning illustrator on these projects.   Additionally, we have a personalized children's book that we want illustrated, so we'd like to work with the designer to come up with some ideas to produce this.  Two separate projects for the winning designer; two more 1 to 1 projects through 99designs.

We love expressive characters that have attitude!

Twisted Disney Concept EP
349 $US
Collaboration for school. We are paired with another student and expected to put together a concept EP for our final ...
30
entries
17
designer graphistes
Millennial podcast needs catchy album artwork.
349 $
"Off The Tracks" is a podcast that is targeted at millennials. Our specific tag line is: "A twenty-something's perspect
124
entries
42
Designer
Stealing the Cannibal's Basket
US$ 899
A gothic steampunk novel written for multiple audiences. This is the final in a series of steampunk novels. There will p
30
entries
11
designers
Indie R&B Artist Needs Album Cover
USD 349
I am an R&B Indie musician and I sing feel-good, love songs that appeals to women of all generations.
61
entries
30
diseñadores
Alaskan Artist - Ocean Inspired Album Cover
$349
Krimson - Alaskan Singer/Songwriter and Outdoor Show Host
183
entries
46
デザイナー数
Illustration - Lifestyle of 5 women enjoying their lives
899 $US
Fyone is a singer, performer, and influencer. She is trying to promote her unique lifestyle to her fans and followers th
92
entries
22
designer graphistes

Jetzt starten
'West Side X West Side' Mixtape Album Art- West Side Story vs West Coast Rap
$ 349
Hybrid music that bridges the gap between classical and popular
38
entries
16
Designer
Create a Futuristic, Edgy and High Tech Podcast Cover for new podcast with Richard A Clarke
$ 899
We produce podcasts for companies like Porsche & Forbes and individuals such as NYT bestseller Richard A Clarke and tech
98
entries
16
Designer
Design an eye-catching album cover for The Restless's new album "The Revolution is Love"!
$349
The Restless are a band from Virginia in the United States. Our musical style is a mix of pop, rock, and dance. We pro
162
entries
38
diseñadores
Family friendly robot and unicorn illustration
£ 1’099
family friendly. for kids for big kids
86
entries
33
designer
Bart Simpson or boondocks style design with a hiphop twist for a dope music producer
£ 709
we sell beats as in music instrumental mostly rap, hip hop, pop and dance music. are target audience would be rappers ,
51
entries
24
designers
Vocal Sample Pack
319 €
We help DJs find their voice. We are a vocalist/songwriter agency providing vocal/song material to DJs in any genre.
97
entries
14
diseñadores
Erfahren Sie mehr über illustration oder grafik Design
So funktioniert's