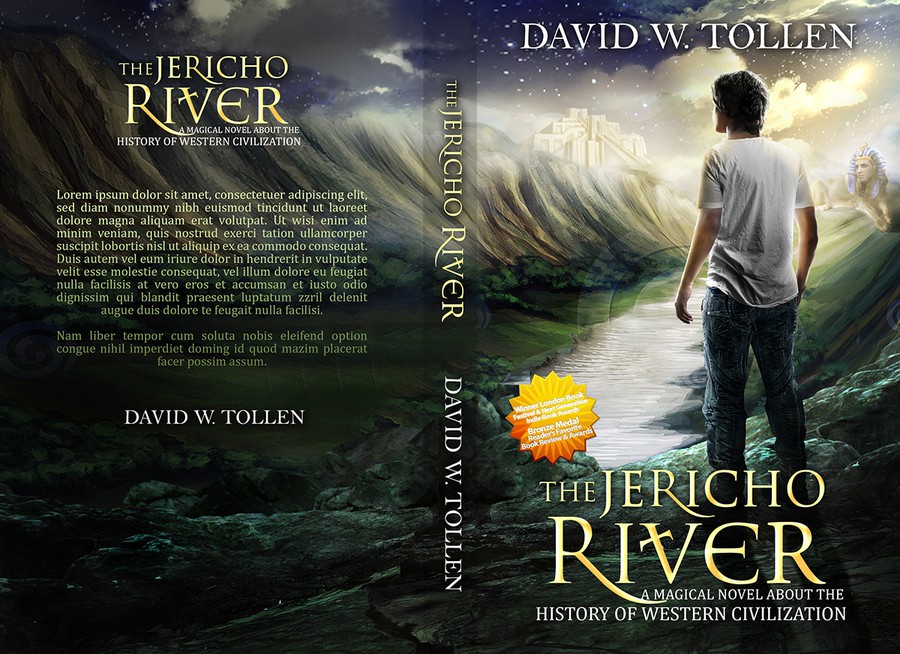 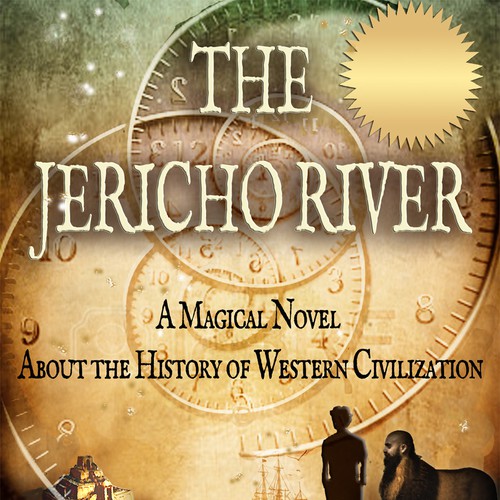 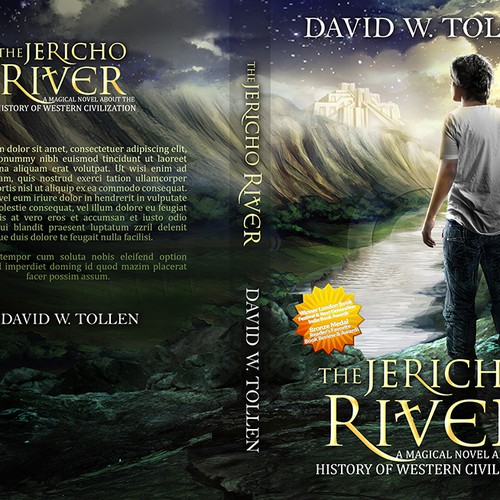 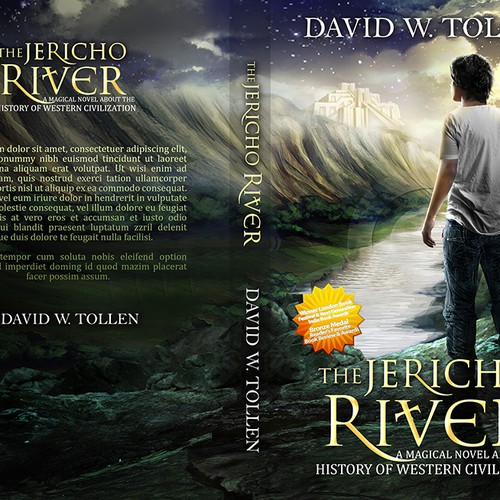 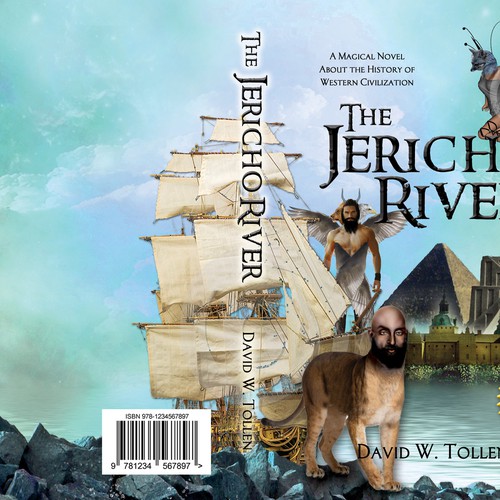 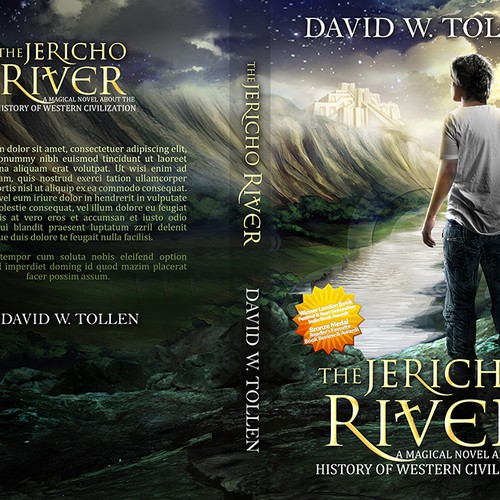 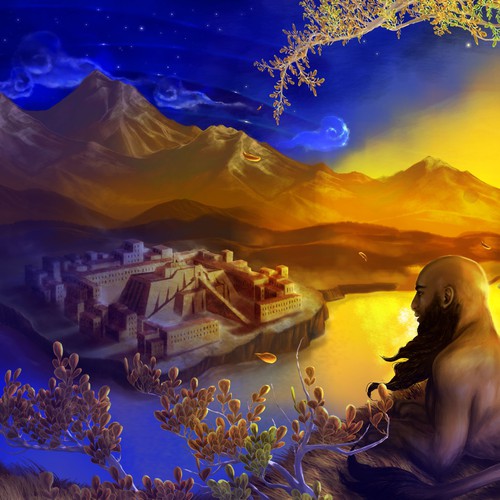 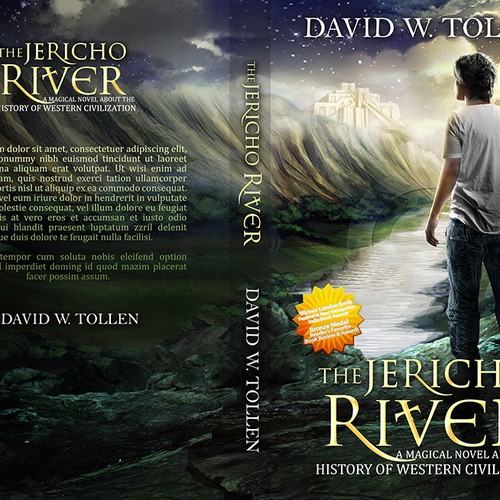 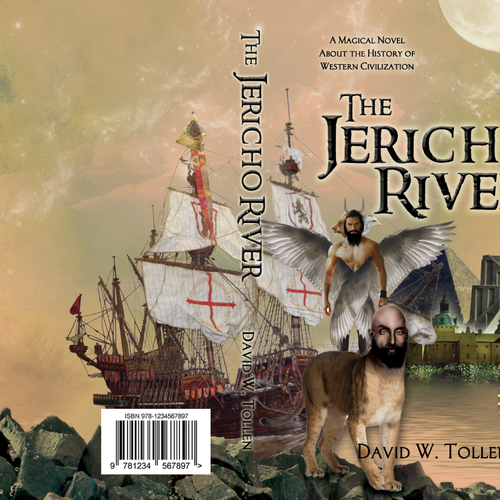 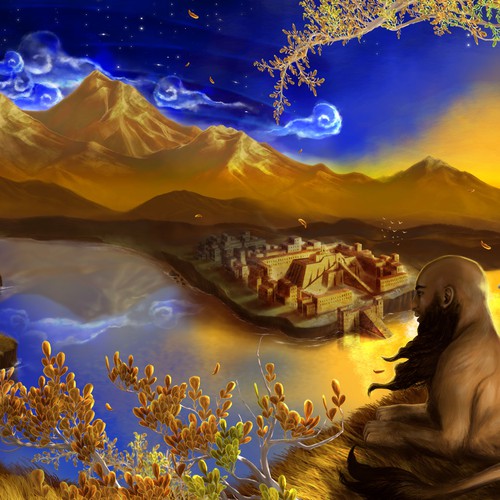 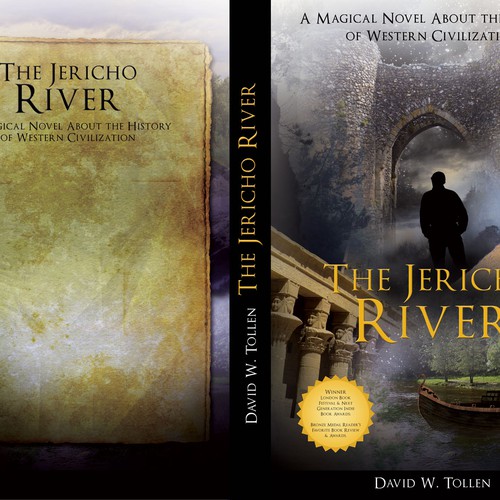 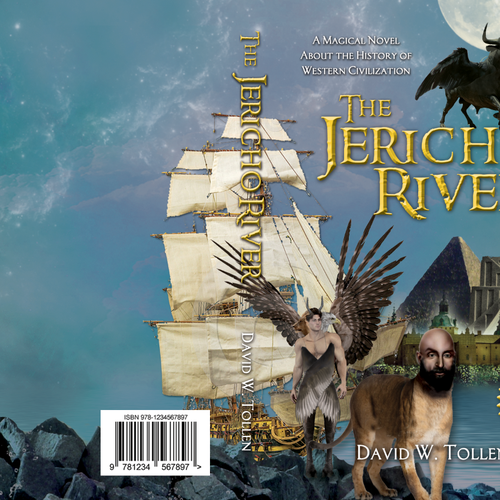 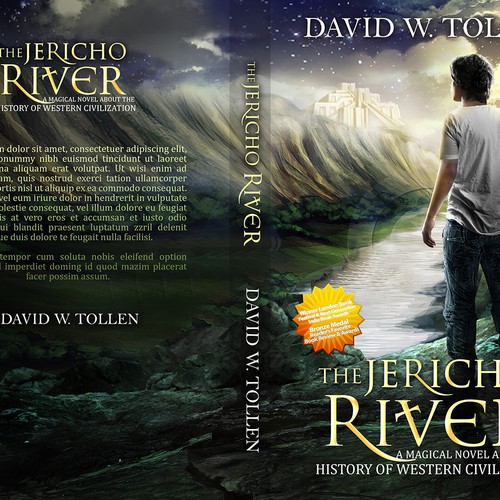 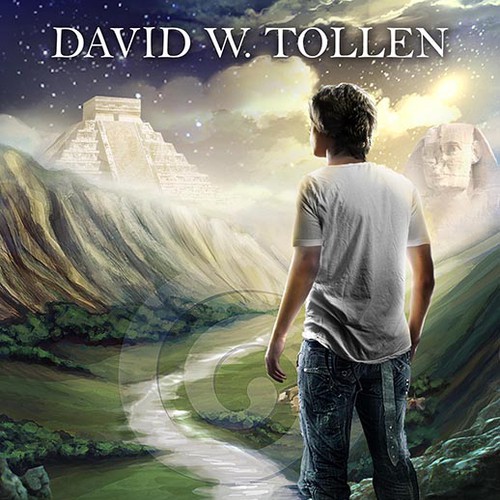 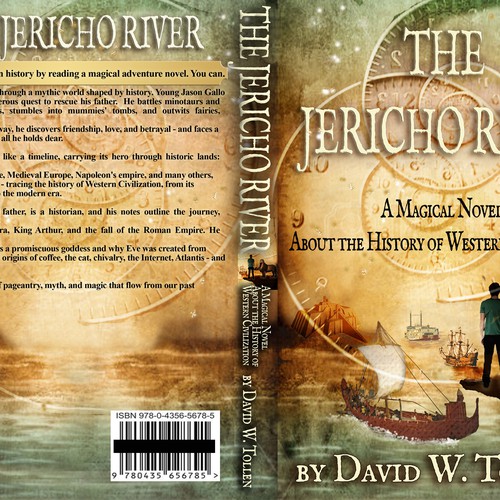 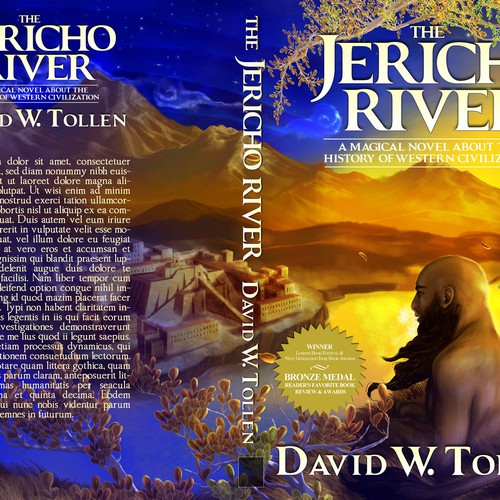 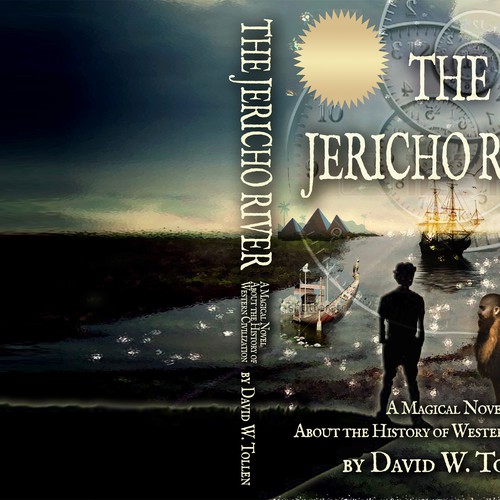 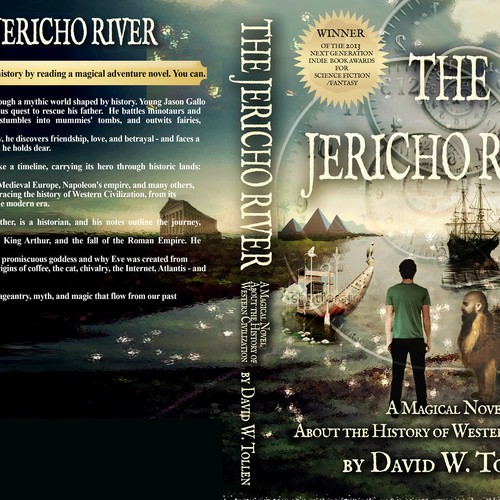 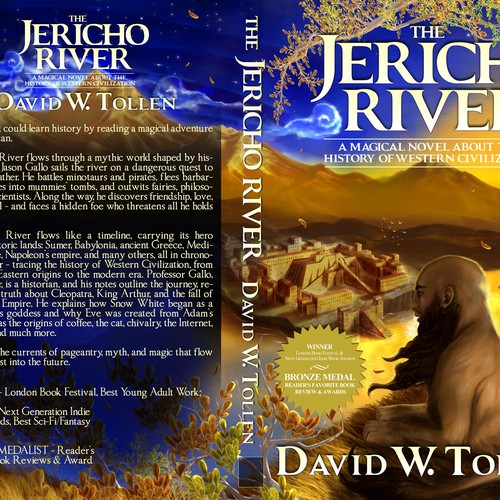 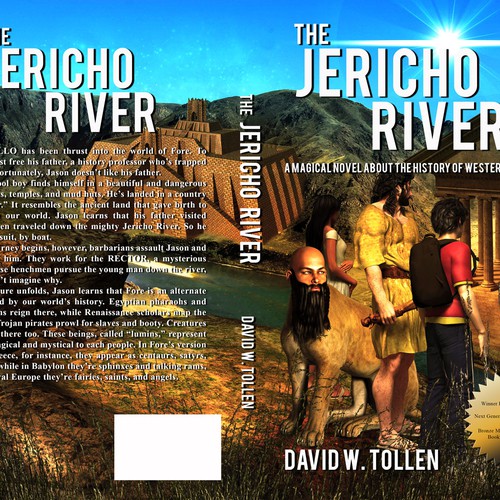 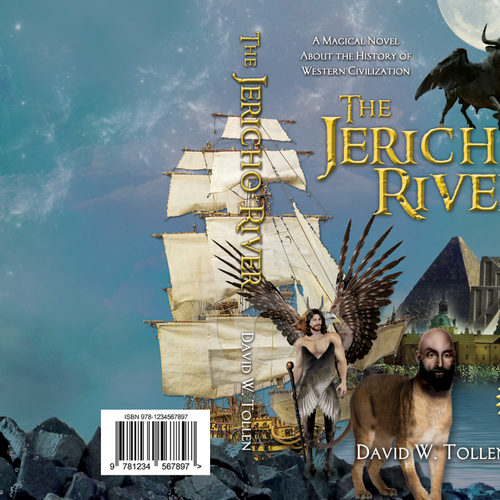 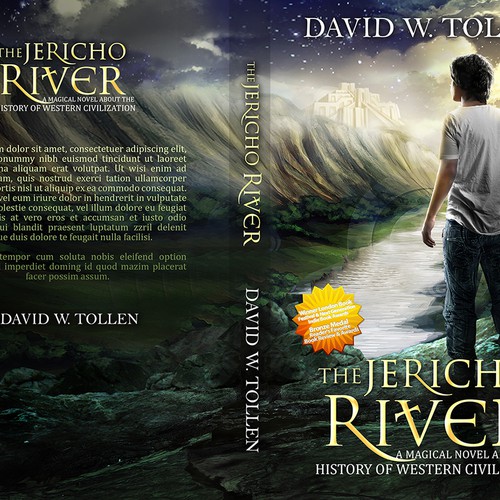 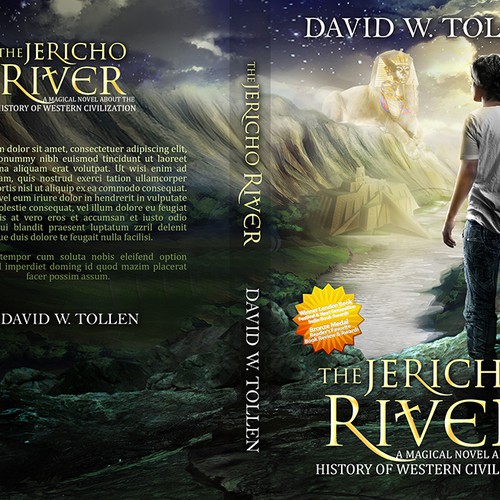 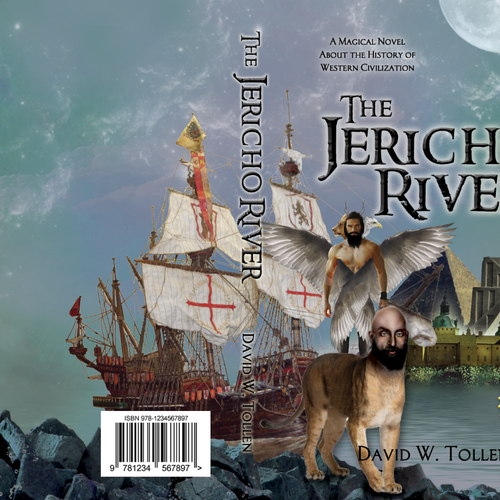 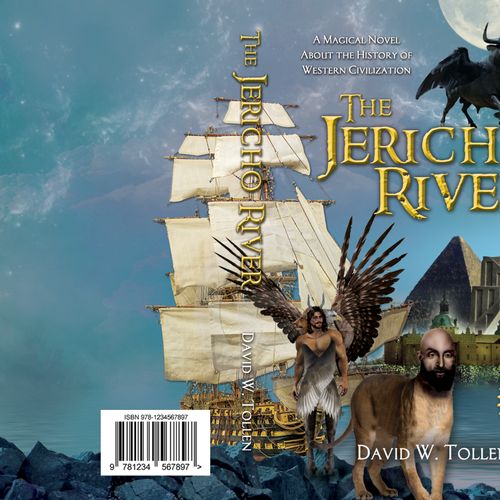 The Jericho River is a novel that uses fantasy to teach the history of Western Civilization. It’s won several awards for its unique story and content. But its cover has gotten bad feedback and needs to be replaced.

The book serves two audiences: kids from 12 to 17 and adults who’d like a fun, easy way to learn history. The cover should mostly appeal to the kids.

The Jericho River is a unique, award-winning book, and your name will appear inside if you’re the cover artist (unless you don’t want that). So this could be a great opportunity. I hope you have fun with it.

The Jericho River's cover should give a feeling of drama and mystery, while capturing the book’s themes of myth and history. The size is 5.5 x 8.5 inches. Both illustrations and stock photos (appropriately licensed) are welcome.

The front cover should include the full title, subtitle, and author name:
The Jericho River
A Magical Novel About the History of Western Civilization
by David W. Tollen
(The original book lists the author name as “David Carthage,” but that’s a pen name, and we’re dropping it for the second edition.)

The front cover also needs a small gold seal that lists its awards. For an example, see the two seals on this book: http://www.amazon.com/gp/product/1612421547/ref. Inside our seal will be the following: "Winner London Book Festival & Next Generation Indie Book Awards; Bronze Medal Reader's Favorite Book Review & Awards." The seal should be in a lower corner, so that it doesn't interfere with your design. I'm flexible about the size, but somewhere around 1.5 inches.

The book's current cover is all wrong. It’s too “soft,” as if the book were for younger readers instead of teens. And though it gives a sense of history, it doesn’t communicate any drama or mystery. You probably won’t be able to resist looking at the cover at the website, but then please try to forget it.

For the new cover's general format, the best two examples I know are: (1) Shadows of Glass, by Kassy Tayler: http://www.kassytayler.com/shadows-of-glass.html (2) the following edition of The Golden Compass, by Phillip Pullman: https://ia600807.us.archive.org/zip…1894-L.jpg. (These are just concept examples. I like their layout, but I'm looking for something unique – not a copy of one of these.)

I’d like several of the key images from the book, with a blend of mythical creatures, historic buildings, landscape -- particularly a river -- and possibly “skyscape” (an interesting sky, as described below). The mythical and historic images should come from different cultures and periods. In particular, the historic images should include some from the Middle East, like Babylonian ziggurats or Egyptian temples. But you don’t need to be a historian! If you choose too many images from the same culture or period, I’ll give you some guidance on choosing more broadly.

The key mythical image to include is Zidu, a Sumerian sphinx and one of the characters. Zidu has the body of a lion and the head of a man. He was inspired by this famous sculpture: http://www.pinterest.com/pin/161777811586299906/. But Zidu has no wings and no hat (and only 4 legs). He’s completely bald but has a thick, black beard and dark skin. He’s wise: a good guy.

Below are lots of other possible images to include, broken down into five categories. But please don’t add all or even most of them. You don’t even need one from each category. These are meant to give you options, and you should include as many or as few images as fit your vision. You can find examples by searching online, but in some cases, I provide links. The links are to give you a visual; they may be copyrighted and so not available.

4. Landscape/Skyscape: The book follows the Jericho River, a wide river that seems never to end. Also, the night sky in the world of the book is unusual. “[The] stars were strange. They glimmered and rippled, as if they shone through a pool of still, dark water.”

5. Jason Gallo, the Story’s Hero: If Jason appears, he should not be up close enough to see his facial features. He could be at a distance and or in silhouette. Jason is a 16-year-old American boy who wears jeans or shorts, a T-shirt, and sneakers. He has dark hair and eyes, and he’s of typical build. He’s scared and stressed, but he grows more confident as the story progresses.

The spine and back cover should leave room for text: the title, author name, and publisher logo on the spine, and a description on the back, as well as the bar code and related details. We'll add that text. The spine should be thick enough for 258 pages (including blanks): about 3/4 of an inch in the current edition. But don't worry about getting the spine width exactly right. We'll adjust when we go to print.

Don’t hesitate to ask questions! I’ll give lots of feedback!

I'll actually check the sources of any stock photos, so please do make sure they're legal.

Have fun! I can't wait to see your designs

ASD Publishing seeks BOOK COVER design for YA NOVEL
299 $US
YA Novel blending romance & suspense - for teen girls & boys
115
entries
35
designer graphistes
Create the next book or magazine cover for Robert Reynolds
499 $
Author
82
entries
18
Designer
Fun Cover Needed for Essay Book
USD 299
I am a writer planning to self-publish a book of entertaining essays about family.
116
entries
17
diseñadores
The Red Ribbon Rebellion - a YA epic adventure - needs a new book
299 $
This is a young-adult action/adventure serial and the design used for web-promotion and for the actual cover
59
entries
20
Designer
Book Cover - Paranormal Romance
USD 299
Novel; entertainment reading. Target Audience is readers of paranormal romance, supernatural and urban fiction....
28
entries
9
designer
Sexy book cover for A Call to Heaven, by Jo Kessel
209 £
A Call to Heaven is a novel. It's commercial women's fiction with a paranormal twist....
102
entries
15
Designer

Jetzt starten
Design a how-to book cover for emerging independent musicians
US$799
Music Business Toolbox is a forthcoming book for independent musicians and emerging record labels. The book includes ...
196
entries
52
diseñadores
Create a book cover for The Happiness Book: A Positive Guide To Happiness!
299 $
The Happiness Book: A Positive Guide To Happiness! is a self-help book that teaches people how to be happier....
101
entries
19
Designer
Design a minimal, mysterious book cover for a philosophical/mystical novel
USD 299
Book publishing...
81
entries
15
diseñadores
Space Opera Book 2 ebook cover
299 US$
Produce speculative fiction novels across multiple specific genres....
43
entries
9
diseñadores
In the Twisted Web
$694
I am an author of commercial fiction, most notably romantic thrillers with a strong female lead....
168
entries
50
デザイナー数
I need a e-book cover. I already sold more than 1,5 million e-books in 14 countries
EUR 459
I' am an Author, my readers are unisex...
285
entries
46
diseñadores
Erfahren Sie mehr über buch oder zeitschriften cover Design
So funktioniert's