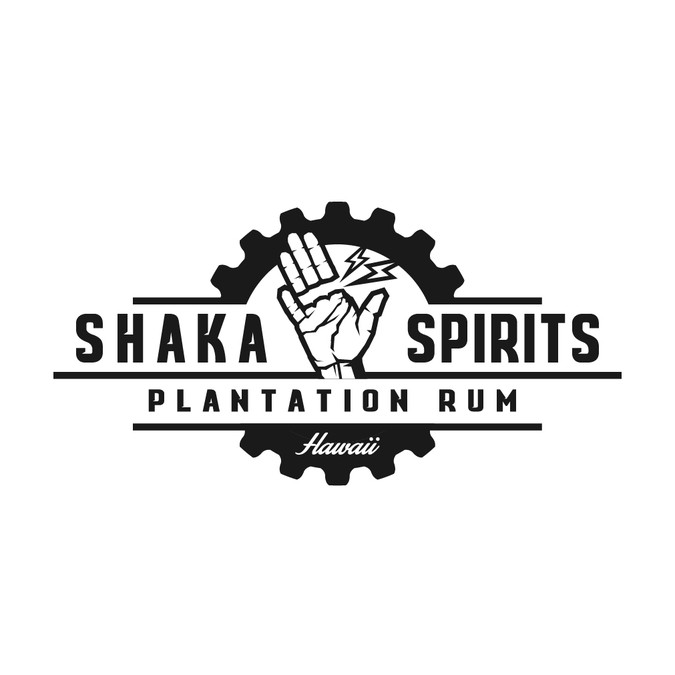 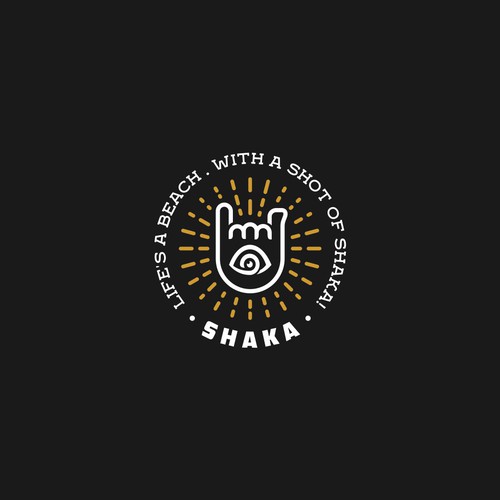 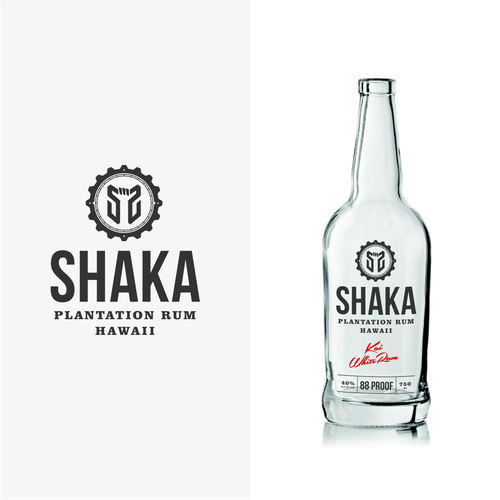 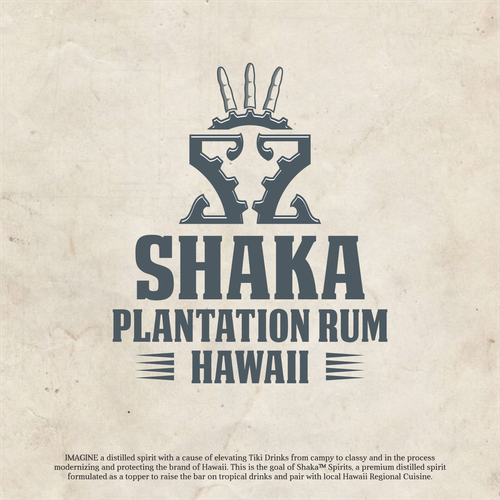 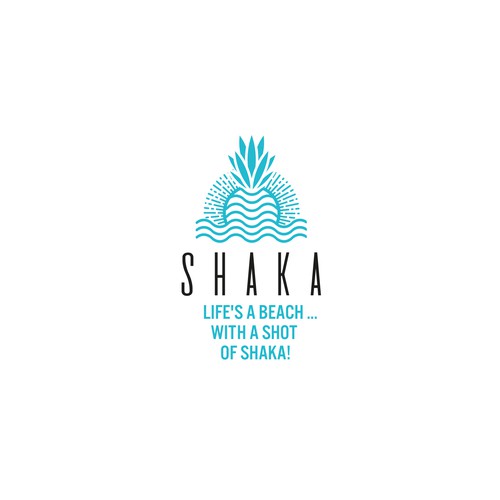 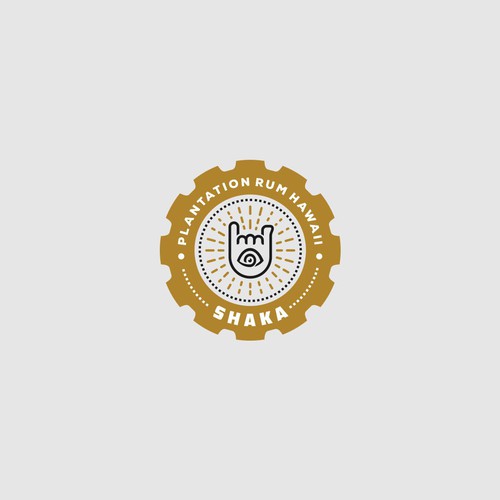 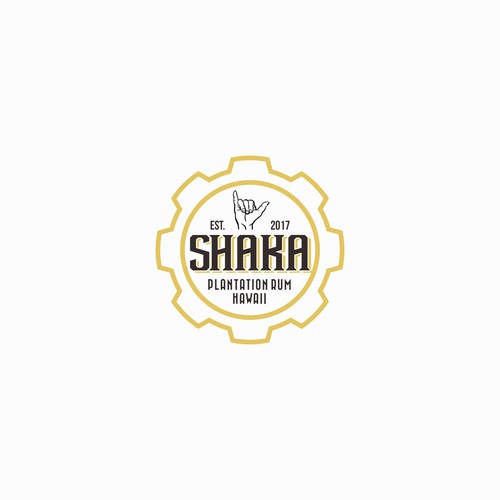 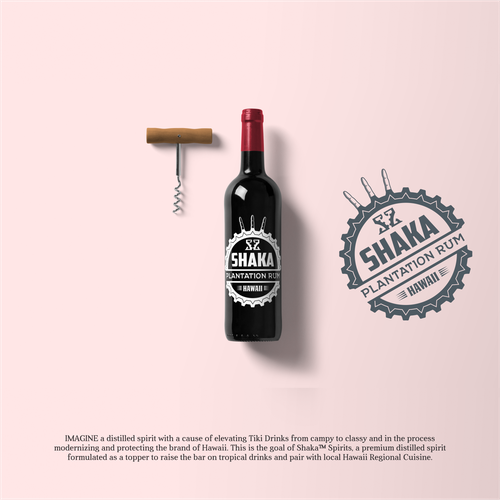 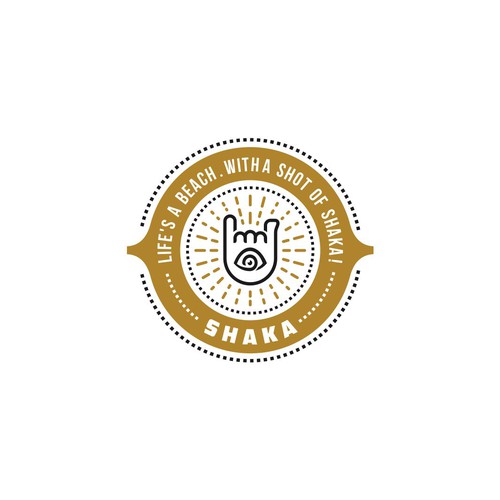 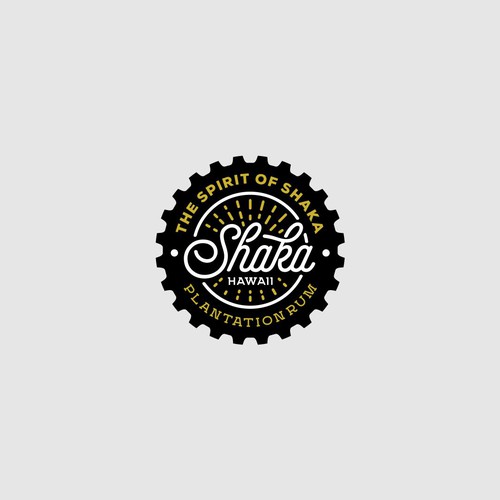 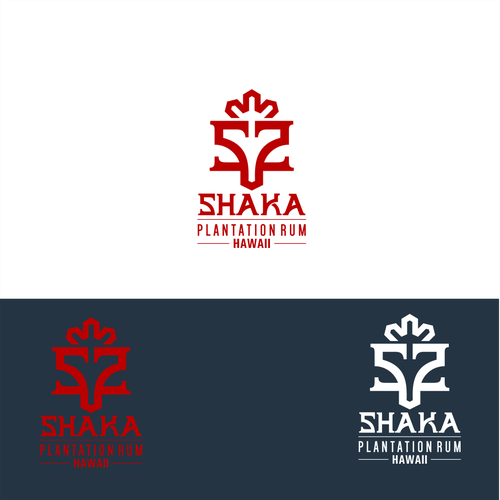 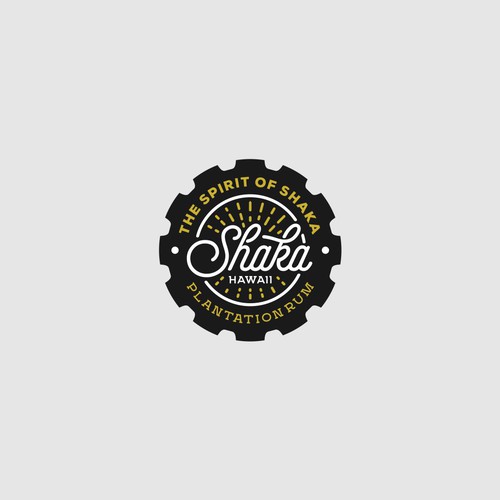 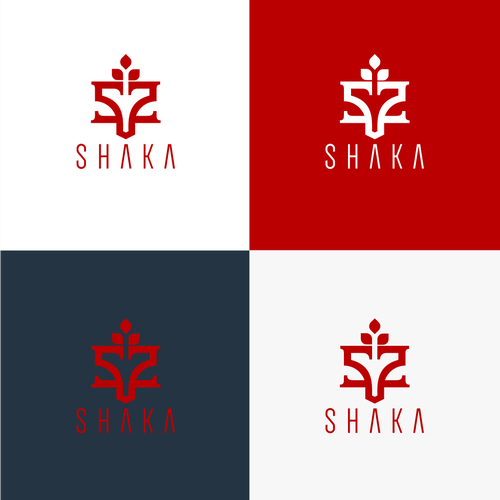 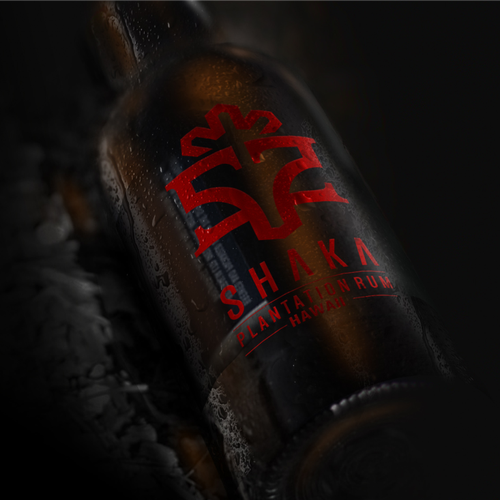 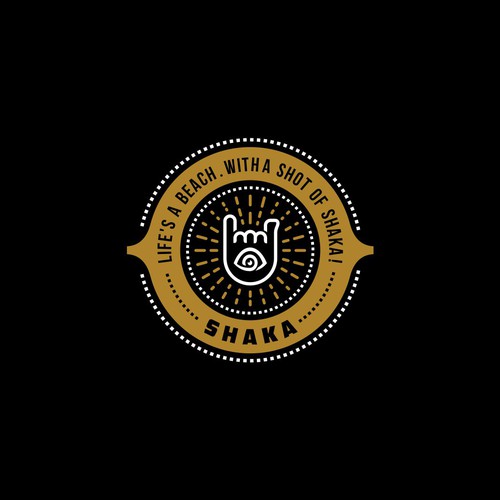 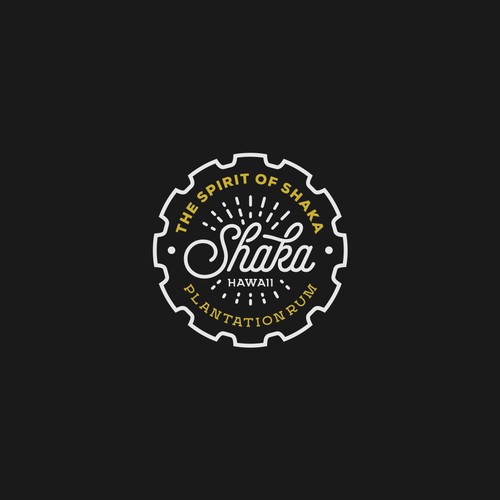 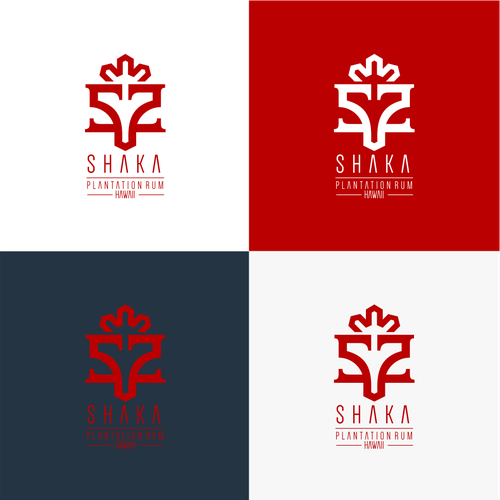 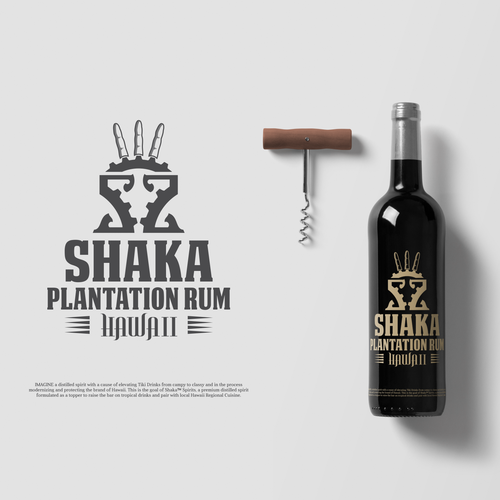 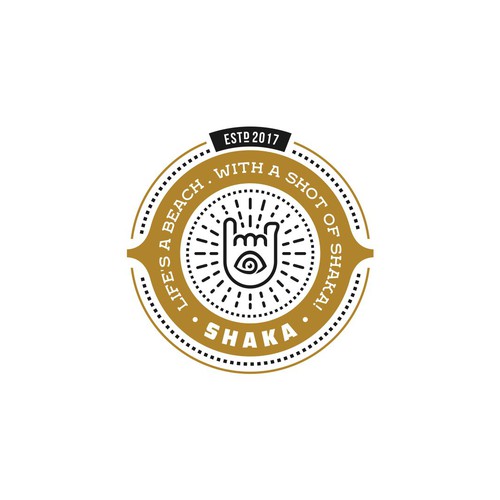 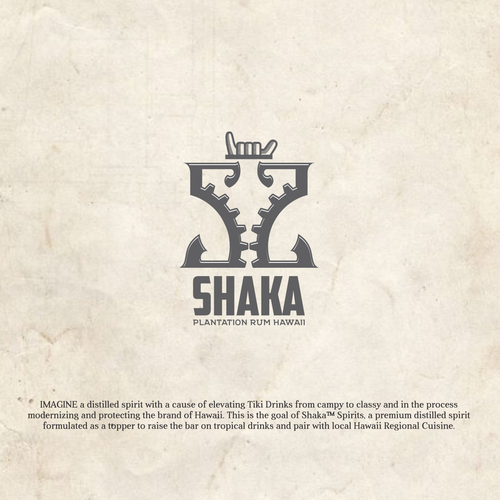 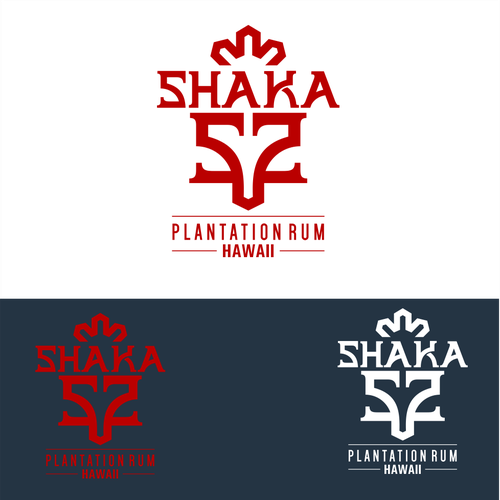 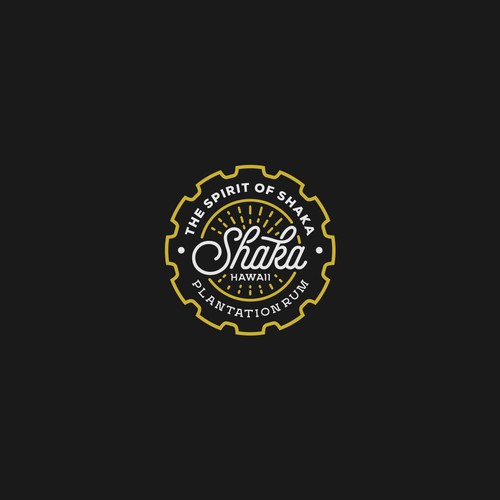 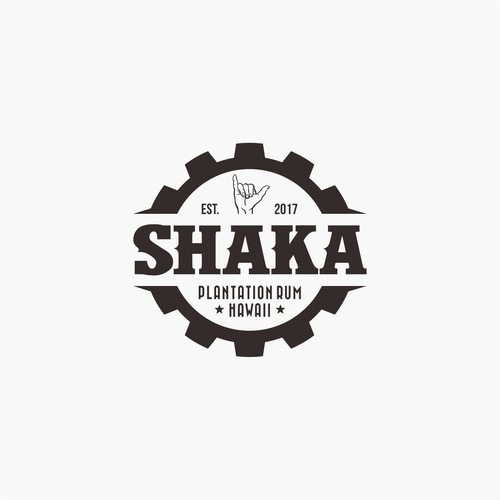 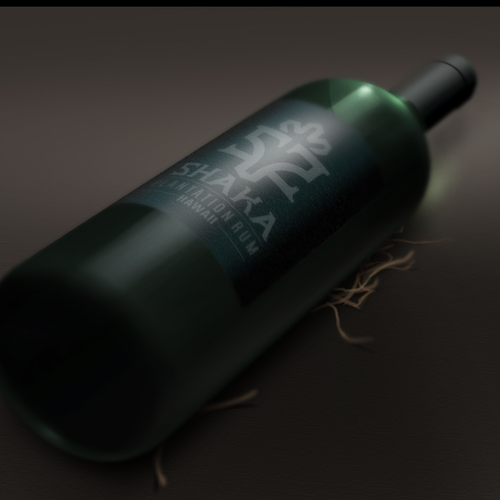 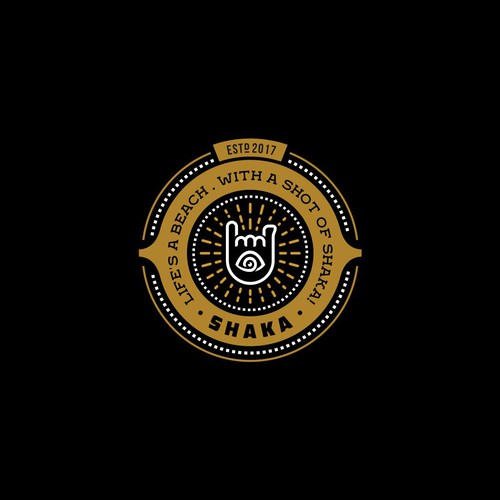 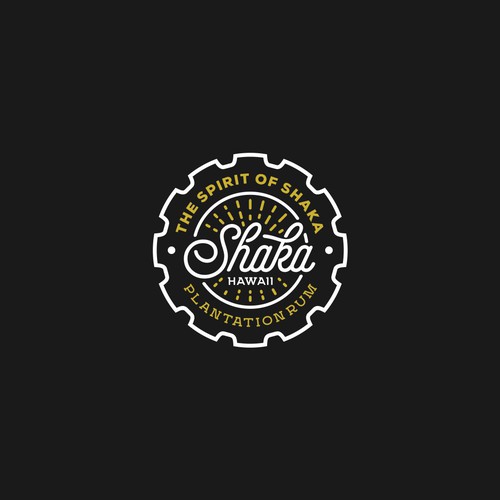 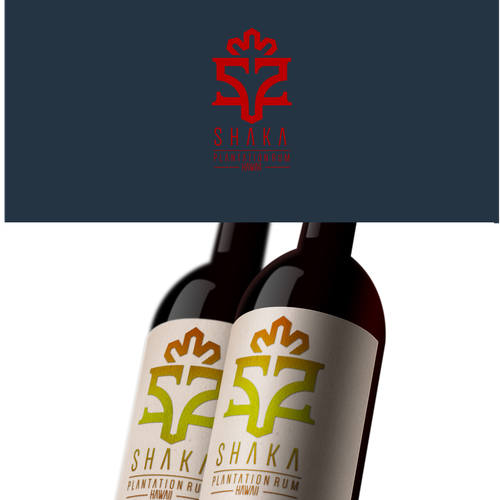 IMAGINE a distilled spirit with a cause of elevating Tiki Drinks from campy to classy and in the process modernizing and protecting the brand of Hawaii. This is the goal of Shaka™ Spirits, a premium distilled spirit formulated as a topper to raise the bar on tropical drinks and pair with local Hawaii Regional Cuisine.

MILLENNIAL TARGET
We are targeting young, hip, clubbing millennials interested in Hawaii culture including Mainland US and Japan. We desire to present well at bars, restaurants and clubs/ultra lounge table service.

DESIRED STYLE
Our product is rough and ready MOONSHINE by farm workers. We need to look potent (bold), gregarious, brave, manly. This beverage is 88 proof. It's meant to burn your insides. Millennials want a tough, rough, hardcore drink that stands up to Caribbean pirate rums. We want HAWAII PLANTATION INDUSTRIAL / MACHINE / AGRICULTURAL / MOONSHINE but also have to be modern, chic, sophisticated and hip rendition for a club setting. But we also want our own twist of easy-going, happy-go-lucky, a bit wise ass, in that face of great danger.

On plantation theme, be aware that our story is from the farm work's perspective making moonshine, it's NOT the haoli's (white person's) perspective as the plantation owner. That said, Victorian/white domination is a no-no while industrial / agricultural / moonshine is a yes-yes. Do a google search for cane sugar machinery: you'll see a lot of large fly wheels, cast iron parts, very heavy stuff...

Shaka also moved into the surf community in later years, but be aware that we DO NOT want California surfer style... again, white dominance is a no-no while local style surf is a yes-yes. For local style surf, see "Eddie Would Go!" style... it's hard-hitting and bold, not flowery/hippy.

Also be aware that the idea of Shaka "Just Go For It!" is different than Nike's "Just Do It." Nike is more, grind it out, commit, be persistent and grit your teeth. Shaka is more of an easy-going, even happy-go-lucky attitude in the face of a dangerous situation. It's a combination of light attitude and hard-hitting manliness.

NO-NO WARNING: We are NOT interested in goofy, themey palm trees, shaka signs, tiki heads, flowers or waves. Most of the time these are used as icons that end up looking like caricatures of Hawaii... this is NOT stupid touristy crap, so if you use any of these icons, you better end up with a sophisticated play.

TITLING: It's really important that the logo easily reads "SHAKA" and also communicates the product type "PLANTATION RUM" and location "HAWAII." These are essential to consumers understanding what we're selling and why it's cool. Optionally, one of the taglines can be used: "Life's a beach... with a shot of Shaka!", "Go for it!" or "The Spirit of Shaka."

Historically, “Shaka” is a hand gesture synonymous with Hawaii and surfing culture. Hawaii’s use of the word Shaka dates back to 1958 at Laie, Oahu where a plantation worker named Hamana Kalili, suffered an accident at the sugarcane mill. Upon recovery, Hamana was reassigned as a security guard on the company train. In the years that followed, kids illegally hopping the train took to signaling each other with an all-clear "go for it" gesture, mimicking the three fingers Hamana had lost in the accident. The gesture was later adopted by Hawaii residents and surfers as a universal “go for it” gesture.

Even before Hawaii, the word “Shaka” finds roots dating back to when Buddhism was first introduced to Japan (circa 600 AD) with the Indian Siddhartha Buddha becoming known as Shakamuni aka Shaka Buddha (recognized by a raised left hand with two middle fingers tucked in). Later, In 1609, Japan conquered and assimilated the Ryukyu Kingdom of Okinawa. By then, the Japanese word “Shaka” had evolved to mean "it’s good" or “it’s all right.” In the early 1900s, Okinawan plantation workers brought the word “Shaka” to Hawaii.

From the Shaka Buddha in Japan, to Okinawa, to Hawaii, to a plantation worker’s lost fingers, to kids jumping on trains and surfers jumping on waves, comes the "go for it" Spirit of Shaka.

RECIPE FORMULATION
We seek to be perceived as a middle to high-end, small batch, handcrafted producer. The overall goal of the Shaka formulation is to paint a picture of Hawaii plantation life and Shaka paradise in the minds of patrons. This target will be pre-described by the brand story and bottle descriptions so as to suggest target flavor profiles for patrons to imagine/taste intended flavor notes. The concept of Shaka Just Go For It! may include notes like: fresh, dangerous, tropical, sweet, happy-go-lucky, sense of humor, friendly, romantic, nostalgic plantation, maternal, surfer, a bikini, sunny palm trees, beach, aqua, plumeria, hibiscus, stephanotis, ginger, lilikoi, mac nuts, coffee, vanilla, pomegranate, Hawaiian paradise with an Asian twist. Fruits like pineapple are unnecessary as they are already Tiki Drink ingredients and would be too cliche/obvious ~ mystery and not being able to quite put a finger on a delightful flavor results in more sipping/sales. Our primary formulations:

1. Shaka “Tiki” Dark Rum: a spiced rum/awamori formulated to be the winning topper for all Tiki Drinks. As a topper, it will offset and add complexity to a sweet fruit drink and not fill up customers with too much sugar or umami. The formulation will suggest hints of Hawaii/Shaka as noted above. Working against sweetness, it will feature: Spice: (many rums are spiced to work against sugar)
Bitters/Toasting: (possibly barrel aged or roasted mac nuts for bitters, also to work against sugar); Acid: (citrus, pineapple or passion fruit on the acidic side without adding more sugar). Note that acids are good as they dissipate flavor/sugar, leaving the patron wanting more as they can’t quite put a definition on what that unique flavor is (keeps the surprise and mystique alive while raising consumption: e.g. Hypnotic). Also note that because this topper will be engineered to be the signature ingredient to offset sweet fruit juices, it will likely NOT aspire to be a great sipping drink, hence the “Tiki” label.

2. Shaka “Pau Hana” Gold Rum: an amber rum/awamori formulated to be smooth and a great sipping rum/awamori as well as be useful in some Tiki Drinks. Targeted to Hawaii Locals and those who wish to live the “Pau Hana” or after work life of Hawaii.

3. Shaka “Kai” White Rum: a clear, clean refreshing rum/soju formulated to be neutral and light for use as a working horse spirit (lower layers of Tiki Drinks).

"BEACH HEAD" PROMOTIONAL STRATEGY
We will seek to own the idea of Tiki Drinks... made with a shot of Shaka. Winning bar locations on Oahu will authenticate the brand and support our distributor’s goal of embedding Shaka™ Spirits into bar backs across the country. Milestones include: Win Waikiki Bars: Become the leader in Tiki Drink spirits in Waikiki. Gain Made in Hawaii (MIH) Designation: Gain approval to market as an MIH product (allows for direct to consumer sales in phase 3 below). Open Tasting Room & Shaka™ Museum: Open tourist attraction and sell direct to consumer at high margin while building brand. Create Shaka™ Awards: elevate the art of the sophisticated Tiki Drink through a mixologist contest featuring large cash purses and high social value.

TAGLINE CANDIDATES
Tiki Drinks... made with a shot of Shaka!
Just go for it!
Life's a Beach... with a Shot of Shaka
The Spirit of Shaka

BOTTLES & LABELING
We will initially package in a generic exiting bottle design rather than have a custom one made. Graphic applications can be either by applied labels or printed directly onto bottles. Simplicity, possibly a bit nostalgic, yet modern, sophisticated balance is desired. A fresh plantation-suggestive approach is likely the best initial solution. Bottles will be sourced from one of these companies: AAC Spirits Catalog http://accspirits.com, OI Spirits Catalog http://o-i.com.

Like the machine industry vibe.
Like the strong, bold vibe.
Like the machine vibe.
Fish Hook Tattoo... Do an symmetrical S with a mirrored backward S in this style... you might even find a shaka in there somewhere. I like the idea that it could be a VERY BOLD logo mark that would really make our bottle stand off the shelf and in a club/lounge. Note that this logo has "NR" with a connecting appendage descender. You might consider a double S with left side backward and a crown "head" that's a small shaka in the same style. If the top half of the S's are larger than the bottom halves, you might find that the whole thing can become a strong warrior stance.
Here's a version of the NR logo mark with the company full name. Shaka SS Spirits would work well in this lockup as the two words could be made to be the same visual length.
A suitable bottle shape. Taller is better for pouring production and is still suitable for table service.
Another interesting bottle.
We don't want to look pirate-like, but we have to stand up to this kind of competitor. We will have darks and golds as well as white rums.

On the brand identity pack, we're asking for bottle applications rather than letterhead, envelopes and FB cover... Bottle concepts should include choice of bottle shape and application of logo and other descriptive packaging elements. Bottle designs can be applied label or print on bottle designs (we probably will prefer the latter, but bear in mind that they must really stand off the shelf against other brands. Pick a bottle shape from one of these companies: AAC Spirits Catalog http://accspirits.com, OI Spirits Catalog http://o-i.com.

Jetzt starten
Design Matchi Matcha brand identity
$1,599
Matchi Matcha import whole-leaf green tea from Japan and grind into green tea powder in Matchi Matcha's factory in Vi...
422
entries
126
designers
Design the logo to Inspire the World to Live-Long, live true and live healthy.
US$ 899
Harnessing the world's wisdom, knowledge and resources to provide the healthiest way to live a Long (and fulfilled) Life
446
entries
64
designers
Design a fresh logo for Corner Smoothies.
$599
It is a Smoothie and juice bar, open near our university. Target are students especially girls , professors, gym and ...
64
entries
19
designers
Create beautiful logo and brand identity for artisenal cheese food truck
1.599 US$
Bubbel & Brie is Swedish and means Champagne & Brie cheese in English. The company is a food truck that offers artise...
539
entries
98
designers
Clean, fresh, simplicity, urban
US$1,599
Ugood focuses on food and drinks, also new machinery technology that relates to the food industry. It also would have a
218
entries
113
designers
Design a logo for Five Points Roasters! An up and coming coffee roastery - I need your creativity!
599 US$
I need a logo design for a coffee roasting company I started earlier this year in Charlotte, North Carolina. I aim to pr
55
entries
24
designers
Erfahren Sie mehr über logo & corporate identity paket Design
So funktioniert's