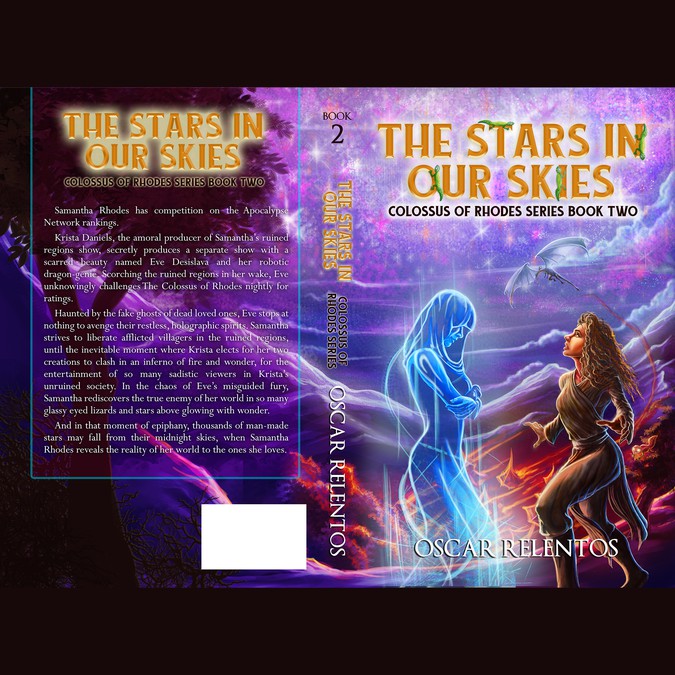 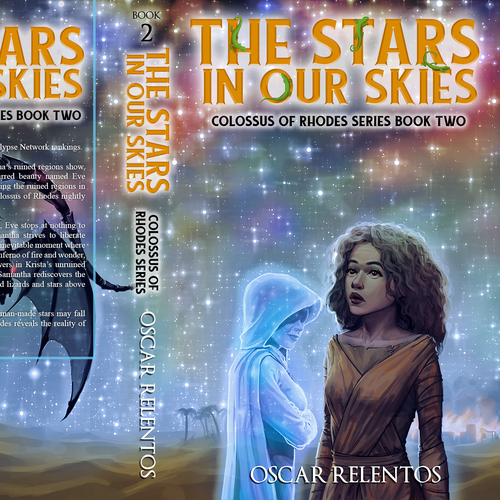 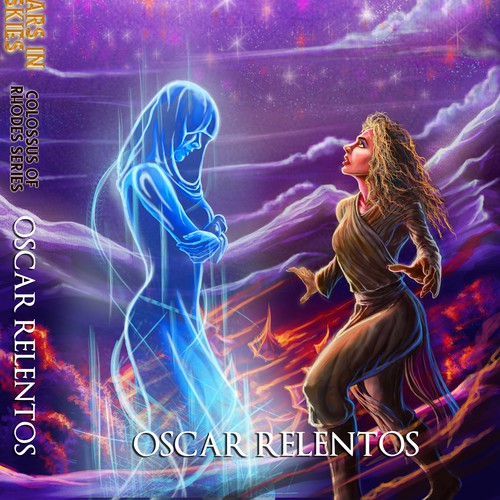 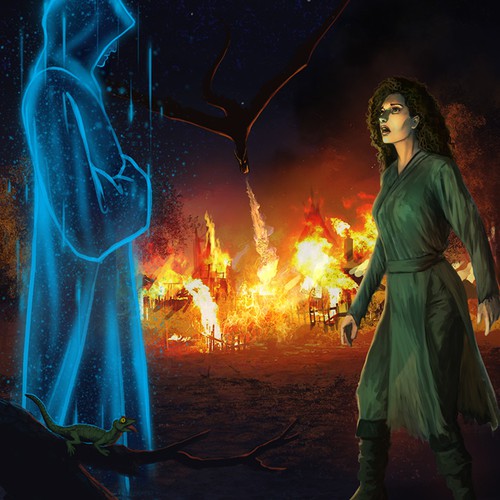 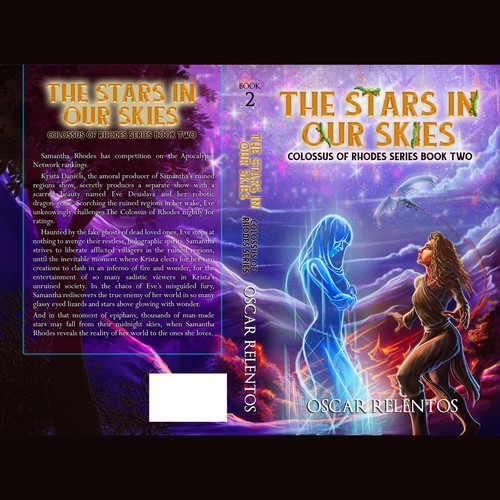 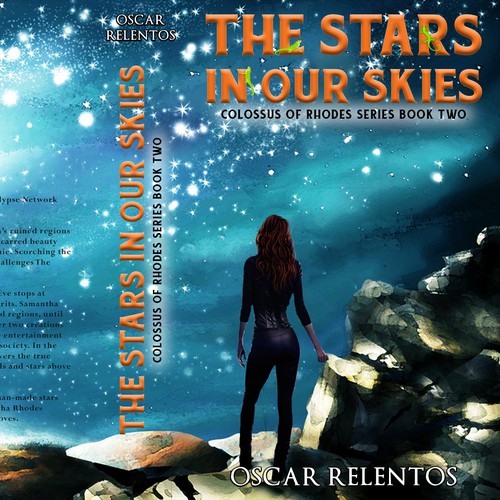 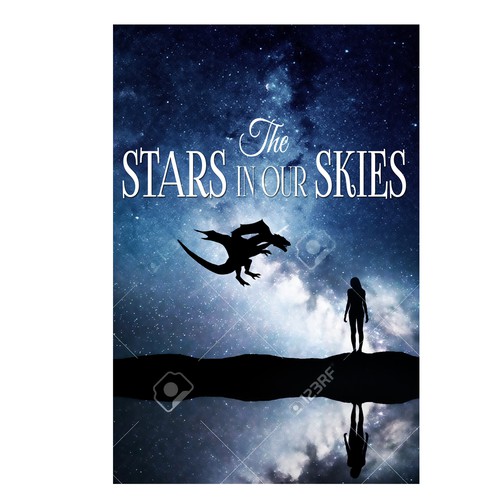 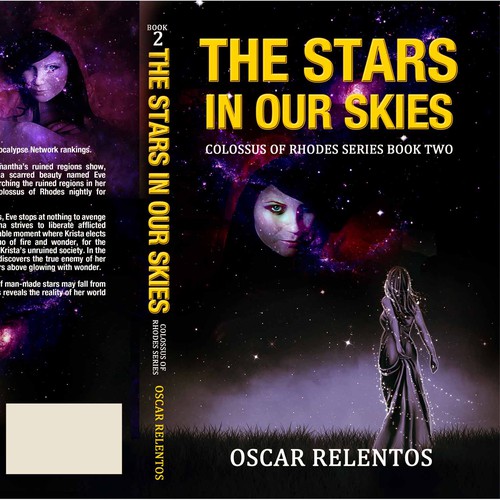 THE STARS IN OUR SKIES

Oscar Relentos is a lifelong New Jerseyan obsessed with the Eagles, the Sixers, and mango smoothies. In between modifying websites and watching too much NBA basketball, he writes post-apocalyptic, dystopian fiction.

Samantha Rhodes has competition on the Apocalypse Network rankings.

Krista Daniels, the amoral producer of Samantha’s ruined regions show, secretly produces a separate show with a scarred beauty named Eve Desislava and her robotic dragon-genie. Scorching the ruined regions in her wake, Eve unknowingly challenges The Colossus of Rhodes nightly for ratings.

Haunted by the fake ghosts of dead loved ones, Eve stops at nothing to avenge their restless, holographic spirits. Samantha strives to liberate afflicted villagers in the ruined regions, until the inevitable moment where Krista elects for her two creations to clash in an inferno of fire and wonder, for the entertainment of so many sadistic viewers in Krista’s unruined society. In the chaos of Eve’s misguided fury, Samantha rediscovers the true enemy of her world in so many glassy eyed lizards and stars above glowing with wonder.

And in that moment of epiphany, thousands of man-made stars may fall from their midnight skies, when Samantha Rhodes reveals the reality of her world to the ones she loves.

Target audience is primarily female teens (13-19). I do believe the target demographic bleeds into the twenties and thirties, but the focused demographic is female teens aged 13-19 that are drawn to Hunger Games type dystopian fiction.

I imagine the cover art involving the main character Samantha Rhodes, with at least her side profile visible, staring up with some trepidation and wonder at a sky of innumerable stars. She’s standing across from a glowing blue hologram of a smiling, robed woman with a hood over her head who is not paying the stars any particular mind. She’s simply folding her arms and smiling mischievously at Samantha, with her eyes obscured by the shadow of her hood. The setting of the image is the desert, with an oasis and a burning village in close proximity.

The Stars in Our Skies is a long title, so that provides a bit of a unique challenge in that I also want there to be strong attention drawn to the stars in the sky, without the title taking the totality of that attention away at the top of the page. I would like particular attention paid to putting plenty of stars into the sky, big and small. The sky is so bright with starlight that it almost looks like dim daylight even at night, and there should be a slight grayish, bluish hue to the sky.

I am open to any color schemes really, but ultimately above all else I would like the book to appear clearly in series with the cover art I have attached below for Elysium. Elysium is the third book in the series, and The Stars in our Skies is the second book in the series.

I would like the fonts to be consistent across all book covers in series as well, so in terms of fonts I would like to use the same ones as in the Elysium cover with Chuck Noon used for the title, Chuck Noon 2 used for the subtitle “COLOSSUS OF RHODES SERIES BOOK TWO”, Perpetua used for the blurb on the back, and Optimus Princeps Semi Bold for the author name.

Also I intend for this to sound as unshallow as possible, but I would like that Samantha look as beautiful as possible since a large focus of the story is the fact that she is a beautiful girl on a reality TV show who happens to have been born in a portion of the world subjected to a very cruel and unusual form of torture for the sake of entertaining others watching her from afar. She is of mixed descent, and I have attached several example images below of what she may look like, along with Elysium’s cover art to guide any interpretation of her character design. The glowing, blue holographic “goddess” is also quite attractive, though she is more middle-aged and only half of her face is really visible beneath her eyes.

I’ve also attached an example of cover art for the first book Watch Them Wander to specifically give an idea for the clothing on Samantha, though I would prefer her face not be covered in the cover art for The Stars in Our Skies.

I also imagined there being a village with tents in the backdrop burning from a robotic dragon’s fire.

The incorporation of the robotic dragon is something I imagined on the back cover flying ominously from the distance (perhaps from distant desert mountains) with a vague image of a girl (named Eve) dressed in armor and looking a lot like a blonde Xena Warrior Princess straddling it. I would be open to the dragon and Eve being incorporated more as a focus of the cover art either on the front or on the back, but the dragon would have to look semi-robotic with a metallic sheen to its scales. I imagined it looking a lot like Drogon in the Song of Ice and Fire books, though I’m open to any interpretations. If Eve is to be detailed she has floral scar tattoos all over her body and face, and she has gold plated armor. If an artist elects to produce a close up of both Eve and her dragon in the cover art, I would request that a gecko with its tongue hanging out be present on the dragon as well if possible.

Avoid using any other fonts than the ones specified. More than anything else I need these books to look in series with one another, so please use Elysium, Colossus of Rhodes Series Book Three as a reference point for the layout.

Cavities No More
529 CA$
The book is primarily aimed at parents of young children. Anyone involved with the care of children. Nurses, public heal
95
entries
25
Designer
InsideOut - Creation Speaks!
$ 329
The target audience is usually 30-60 yrs old and either "outdoorsy" or "hippyish".
51
entries
22
Designer
New Cover for Amazon Bestseller Dystopian Book "Fever Rising"
US$ 499
Young/New Adults into dystopians and sci-fi/fiction.
58
entries
14
designers
Book design for: How to Live a Normal Life in an Extraordinary World
539 $AU
Seekers, searchers, question-askers, the curious, unsettled and those exploring change.
47
entries
16
designer graphistes
Book Cover Design for a Fantasy Novel about Mermaids
359 €
This book will be read by French speaking readers, mostly womens, between 20 and 35 years, maybe more.
49
entries
24
Designer
Book cover for non-fiction
199 US$
138
entries
21
diseñadores

Jetzt starten
Murder at the Country Club
USD 1,199
Someone who enjoys Cozy Mysteries
65
entries
15
diseñadores
The Culprit
CA$529
35 plus cat lovers and fans of true story satirical writing.
168
entries
50
デザイナー数
design a beautiful, shattered or broken heart cover for my book, Beautifully Broken
299 $US
Anyone going through any kind of hardship or struggle. It's a story of hope and never giving up, and never taking for g
156
entries
43
designer graphistes
Design a feminine premium front cover for a budget planner
$499
women 25+ y.o. US-based
64
entries
11
デザイナー数
Make my coronavirus book cover.
199 $
Business owners and entrepreneurs.
122
entries
40
Designer
Design the cover of a book about the healing power of God
US$ 399
Christians who are tired of being sick and want to receive the healing power of God.
43
entries
19
designers
Erfahren Sie mehr über buch oder zeitschriften cover Design
So funktioniert's