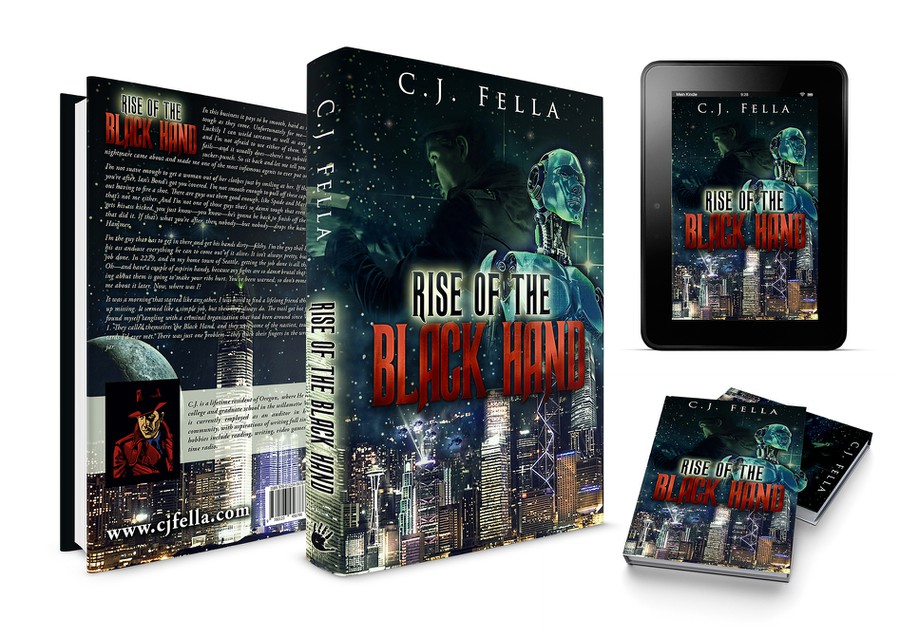 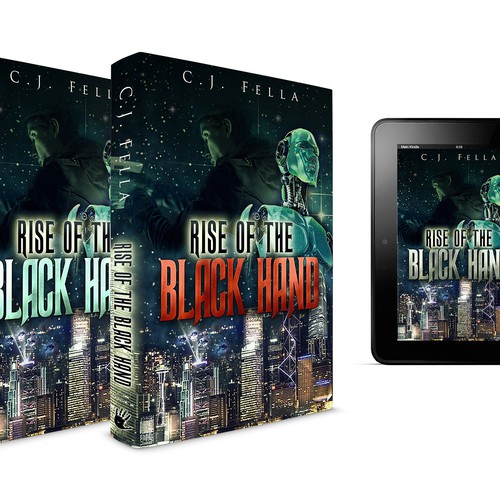 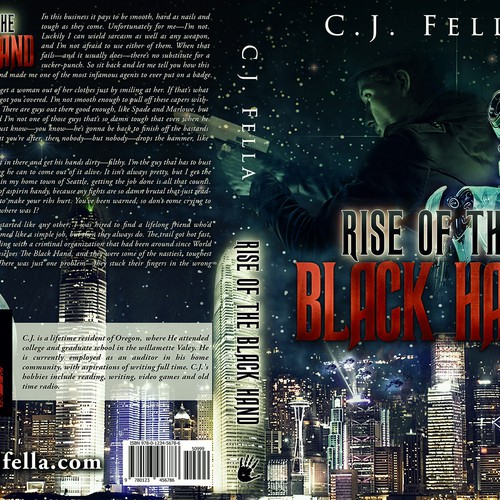 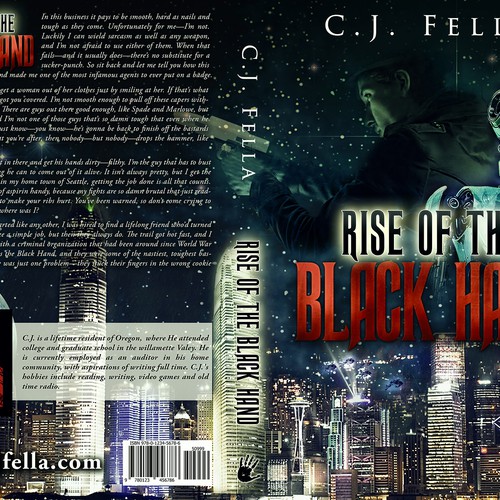 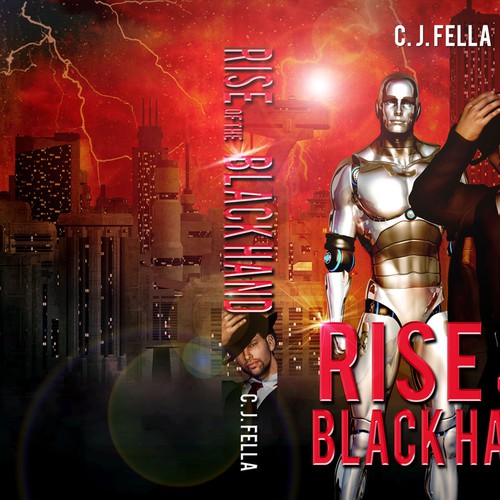 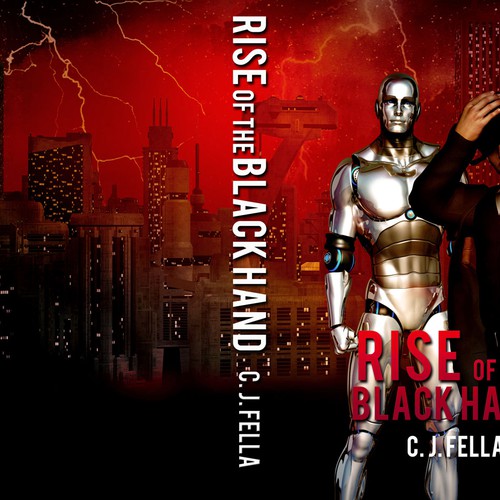 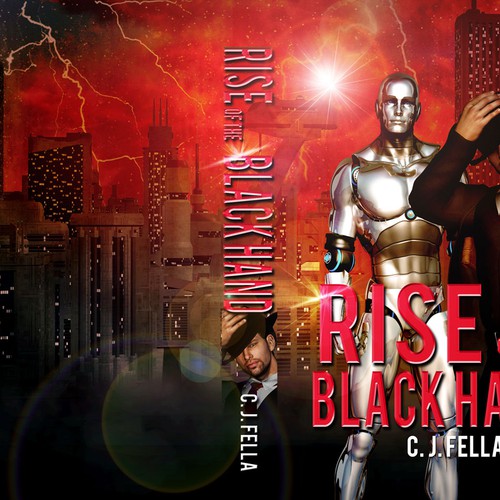 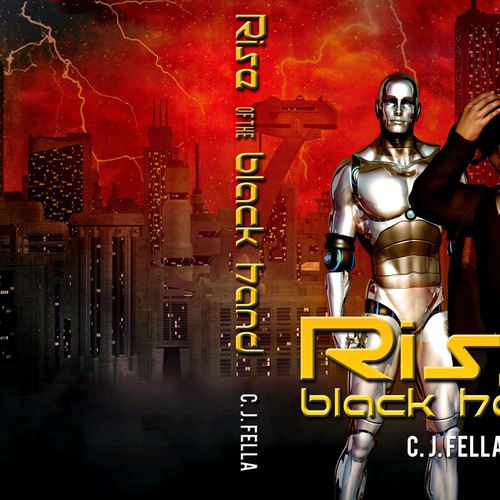 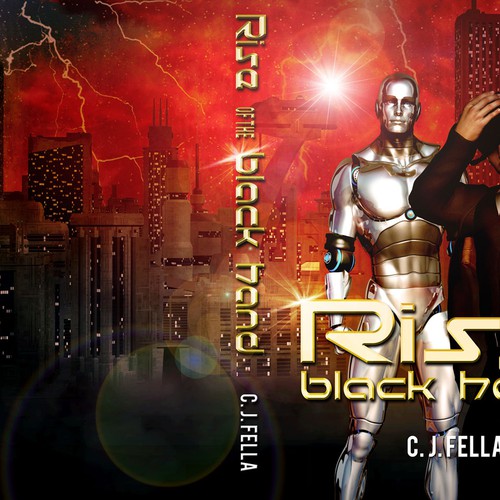 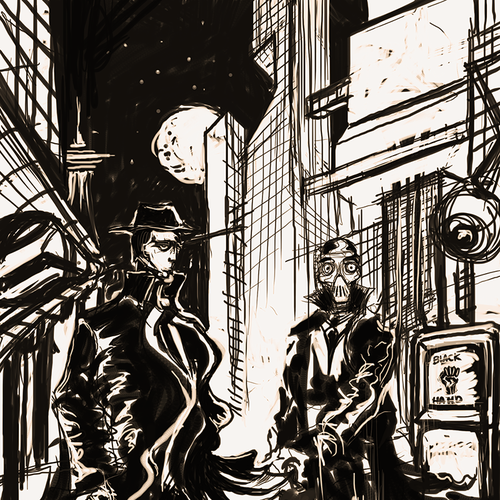 The target audience is adults, primarily males, although it will attract any customers who are fans of science fiction, detective noir and fast paced action.

Book cover design for a science fiction, detective, noir novel, the first in a series of four. Need both the front and back cover, including spine. The title is "Rise of The Black Hand."

The concept will combine science fiction elements with a 'retro' style when it comes to fashion. Although it is set a few hundred years in the future, I want the characters to dress much like they would have in the 1930-1950's. For example, men would typically wear a full suit and tie, hats, and long overcoats, but you can certainly feel free to modernize the fashion to an extent. Don't get corny with it. Stick with the old world style and a touch of futuristic flair.

If there are any firearms visible, such as their duty pistols, give them a futuristic look as well. The main character wears his in a shoulder holster. The second male character carries his on his hip. This doesn't need to be shown, just some added detail if it is needed.

Agents in this story wear a "gauntlet" on their dominant hand, which extends midway up the forearm. It covers their hand completely and contains a miniature computer, video screen, etc. This does not necessarily need to be shown, but would be a nice bit of detail.

The story takes place in Seattle, Washington. It will probably be tempting to include some of the familiar Seattle skyline, such as the Space Needle. While I am not opposed to this, remember that the Space Needle is now VERY short compared to the rest of the futuristic city. That may be a nice visual in itself.

I would like two of the characters in the foreground. 1. The main character. He is tall, lean, black goatee and hair, always in a suit, tie and hat.

The second character can be either the robot in the story--but if you are not comfortable with robots, the second male character will do nicely. He is shorter, somewhat stocky but not fat. Sandy blond hair, clean shaven. IF you go with the robot, he is not meant to be mistaken for a human. Other than that, he is human-shaped, bipedal, etc.

I would like to see a nice Sci-Fi city in the near background, with as much detail as possible. Cars, buildings, let your creativity run wild on this.

Stay away from light colors such as pastels. I want a rich, dark color palette. Even on clothing, lighting etc. Don't get bogged down by what is "usual." For example, on the long overcoats, don't feel like you have to use the same old tan. In fact, don't. Get creative on colors, but stay away from designs or stripes on the coats. Solid colors or gradations only. And if you use both human characters, their coats need to be different colors. Also, coats must match hats in color.

I want the overall color and feel of the cover to be dark, preferably set at night.

A cool logo or design for the series would be nice. A stylized "Black Hand" logo, symbol, etc.

I would like the Title and Author's name, C.J. Fella, to be displayed. The book will be available both in print and on Kindle, so I'd like the cover to be appealing in a thumbnail and in full-size view.

Trim size is 6' by 9'. Spine width is approximately .65 inches, but the spine length isn't firmed up yet, so I may need some adjustments to fonts on the spine.

The back cover will have text on it about the book. I do NOT want a "text box" for this. I'd like the text to be placed directly on the cover image.

Do not use the included image in the design work. This was purchased at my expense only to give some visual representation of the level of design I'm looking for in the cityscape. In addition, it does not incorporate some of my other suggestions.

I'll give feedback as regularly as I can. Having said that, I have a day job so it will be difficult for me to give feedback Monday through Thursday until after 6 pm, Pacific Time. I have scheduled the contest to coincide with my days off so I can offer as much feedback in the first few days as possible. In addition, I am a night owl. I will be giving feedback in the afternoon and late into the evening, so keep your eyes open.

As the winning artist, you are breathing life into my project visually, and I take that very seriously. Unless specified by the artist, I will be crediting him or her in both the book and on my website.

I have included a synopsis of the story in Word format, please review if you think it would be helpful, but do not distribute.

I will provide the text for the back cover in the final round.