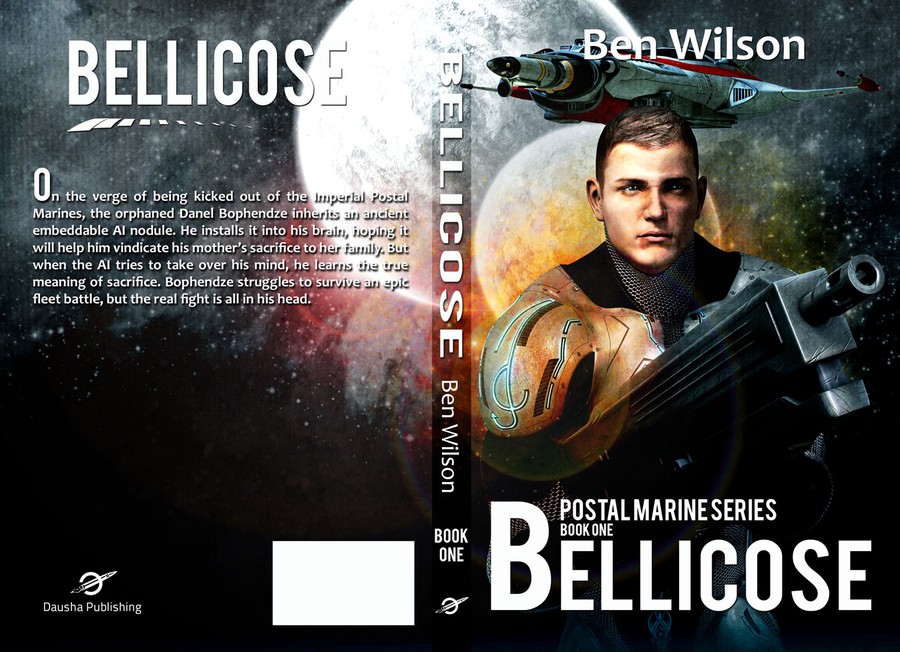 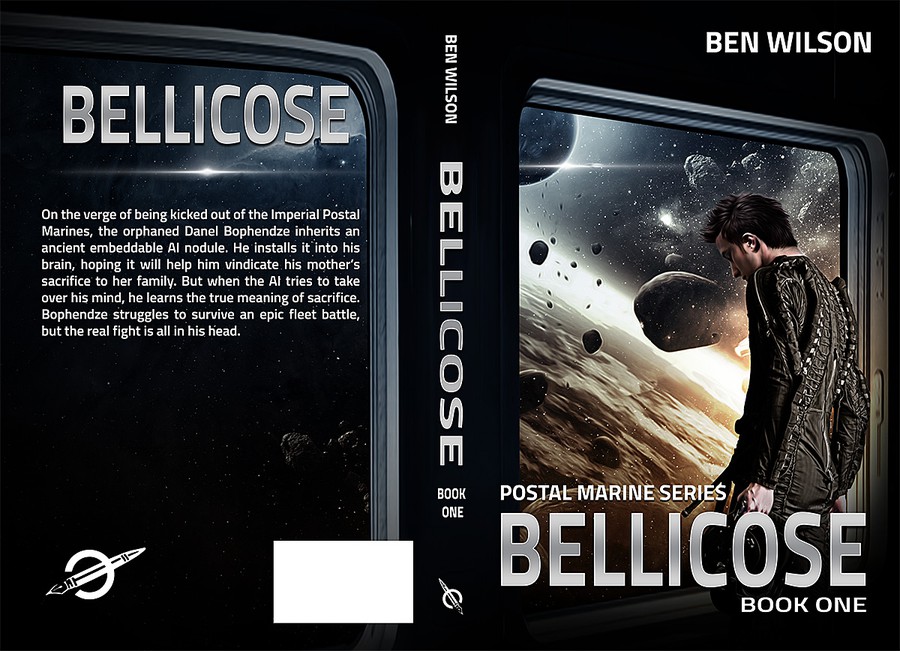 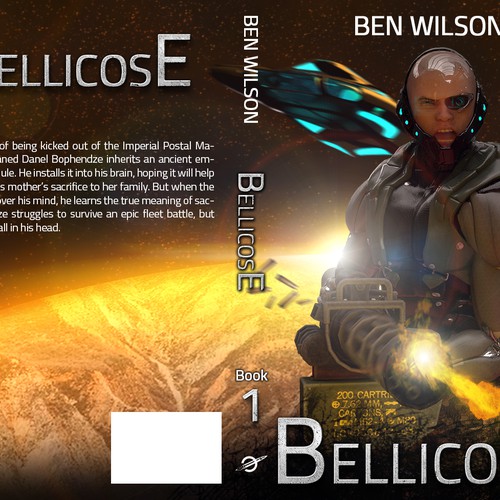 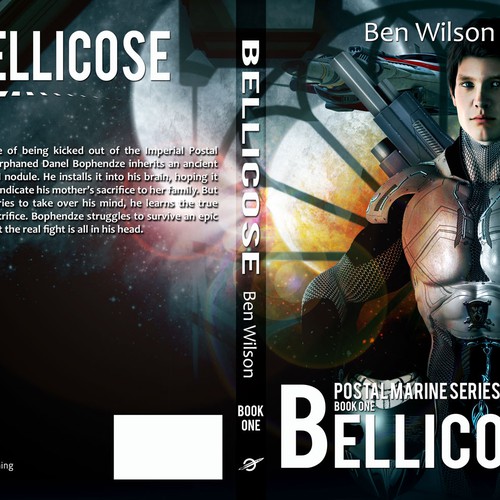 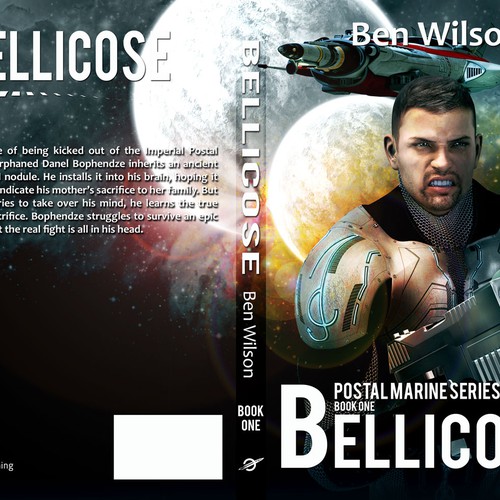 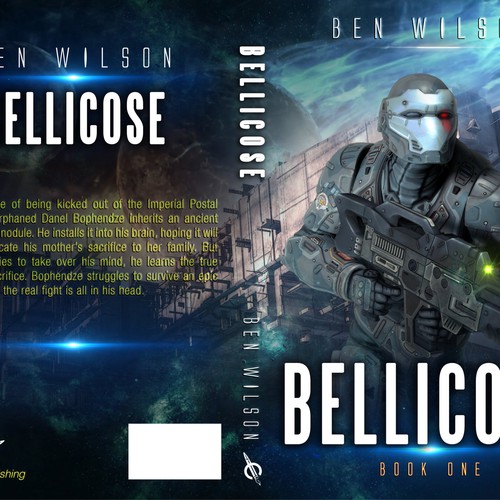 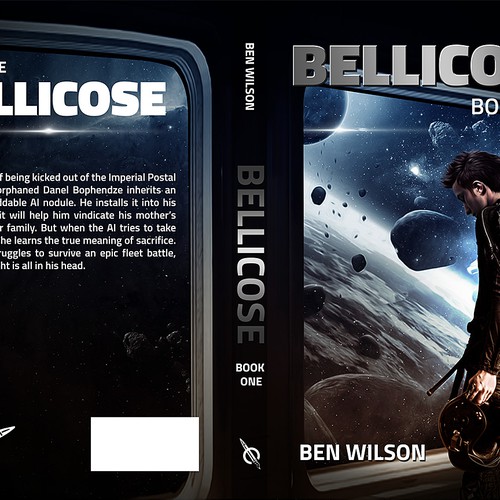 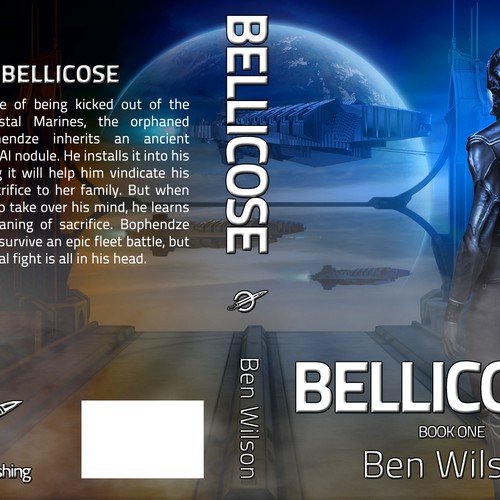 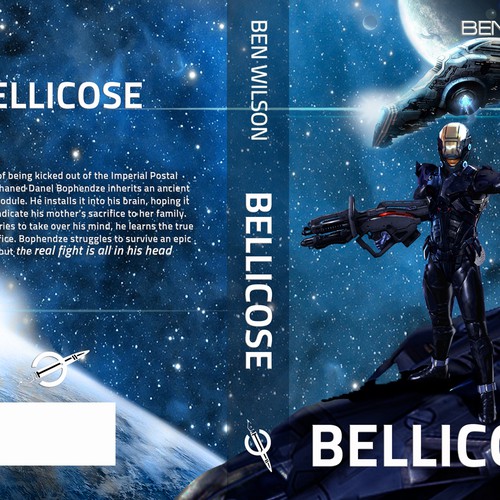 Dausha Publishing is the d.b.a for author Ben Wilson, who writes some of the worst Science Fiction novels ever composed.

Bellicose is about an Imperial Postal Marine: Danel Bophendze. He joins the Postal Marines as an orphan (16yo), and embeds an artificial intelligence (AI) in his brain to make up for his deficiencies. He spends the rest of his life battling the psychosis of having a powerful intellect, while at the same time becoming a legend.

This milieu is set about 1900 years in the future, but fairly distopian. Faster-than-light travel is a complex "hop" that has a low probability of failure that (effectively) destroys the ships.

The Postal Marines are somewhere between the National Guard and the Coast Guard...they have their own space ships and tend to be ship-combat focused. They interdict smugglers, perform rescues and stop pirating. They wear body-tight battle armor with helmets & HUD (capable of limited space survivability and flight). Their ships are small to medium in size.

However, by the end of the novel, the Postal Marines form as a fleet (first time ever) and take on a portion of the Imperial Navy, who tend to operate using large ships. The Navy engages in system-wide subjugation, planetary bombardments, and planetary battle/occupation. The Navy knows they are coming and are prepared to slaughter them.

Instead, Bophendze boards the Navy flagship by going down a 720mm cannon barrel between shots. I always thought it would be interesting to see a graphic of him at the gun's muzzle preparing to fly down the barrel.

Final Design should be devoid of Text. I am still working on the blurb, and room needs to be left for the logo. Thanks.

Generally speaking, title should be in Titillium+Web (Google Font, free).

I see this in a few submissions. Bellicose is completely in space, on orbitals or ships. So, Cityscape / Planet-borne submissions will need to change to keep in the running.

This is one of a series of five plotted novels (a total of 16 being considered):

You see by the design I used for the first two books that I hope some core elements of the design will work through all books.

Jetzt starten
Design a book cover that transcend time and space for a scifi adventure
$299
Book publishing, entertainment and media. Development of a book series in science fiction and fantasy along with a sc...
54
entries
14
デザイナー数
June Jenson and the Coins of Cassidy Book Cover
399 CA$
Emily Harper is the bestselling and award winning women's fiction author of White Lies, Checking Inn, My Sort-of, Kin...
53
entries
9
designers
Design a book cover for a contemporary lovestory in San Francisco
399 CHF
I'm writing romance novels as a selfpublishing author. My stories are published as amazon e-books, softcover and hard...
175
entries
35
designers
"The Critic," a literary thriller needs a killer book cover!
299 $
Hello Designers! I am looking for a book cover. It falls under the literary genre, but with a thriller element. M...
73
entries
22
Designer
Design book #1 in the highly-anticipated ParentNormal humor book series
299 $
My name is Chris Cate. I’m a parent of three kids, and my parenting humor has been featured on the Huffington Post, B...
71
entries
9
Designer
"Emma" a short story that needs a book cover
299 $US
Hello Designers! I am looking for a short story cover. It falls under the literary genre. My future readers are A...
105
entries
39
designer graphistes
Erfahren Sie mehr über buch oder zeitschriften cover Design
So funktioniert's