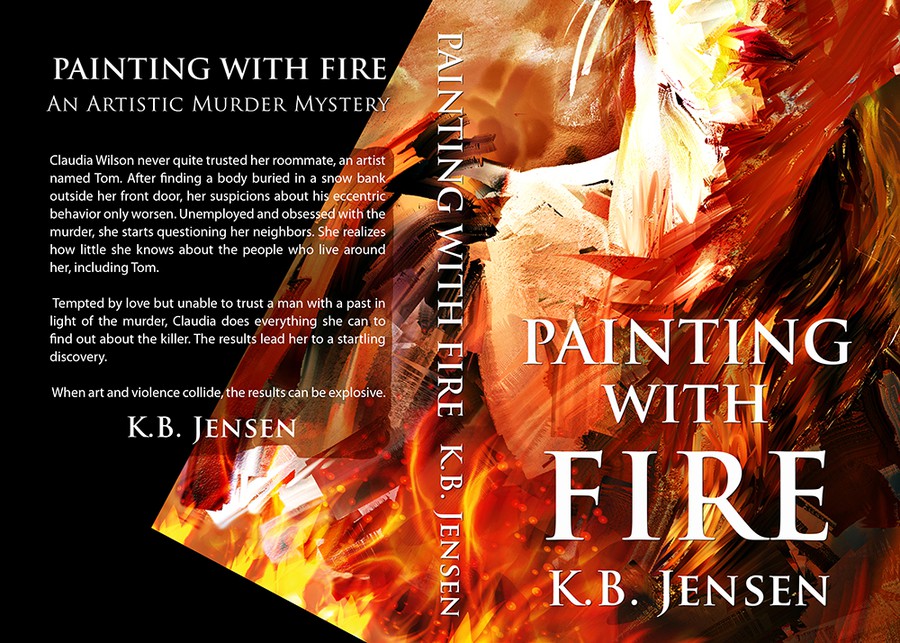 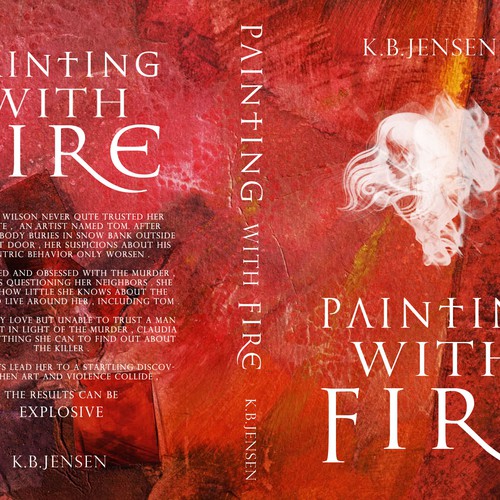 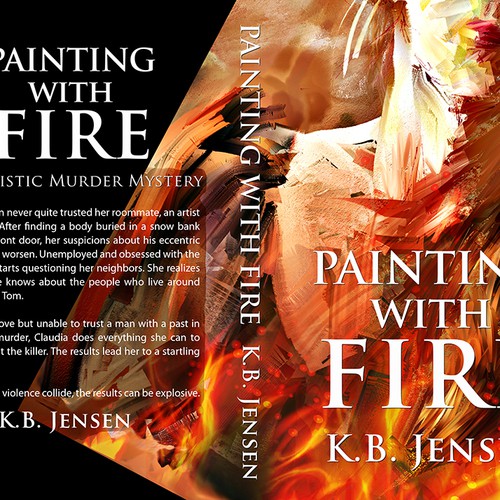 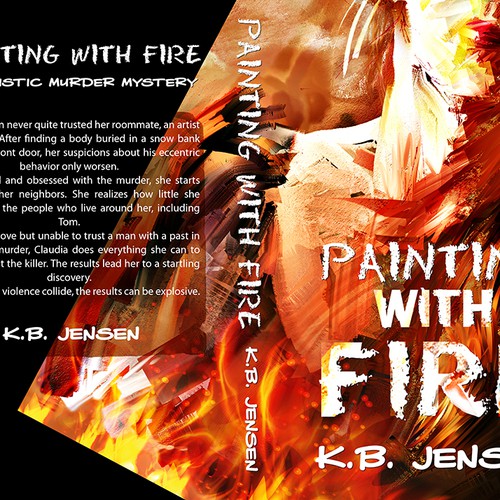 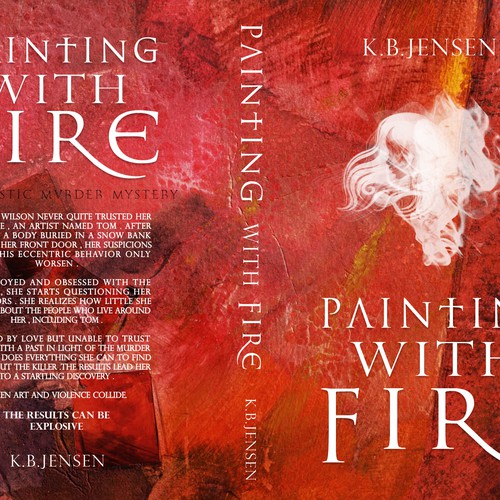 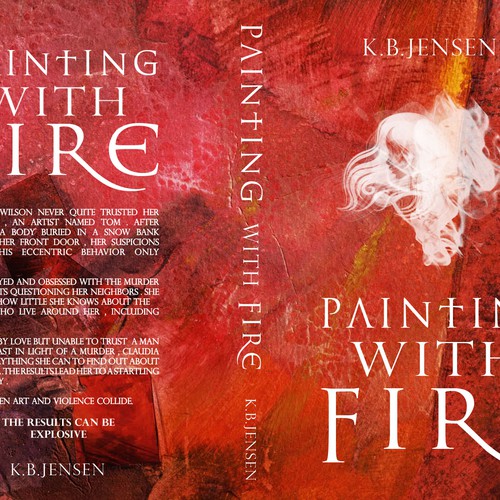 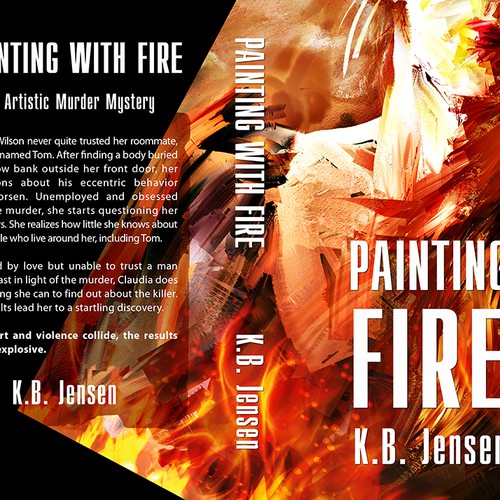 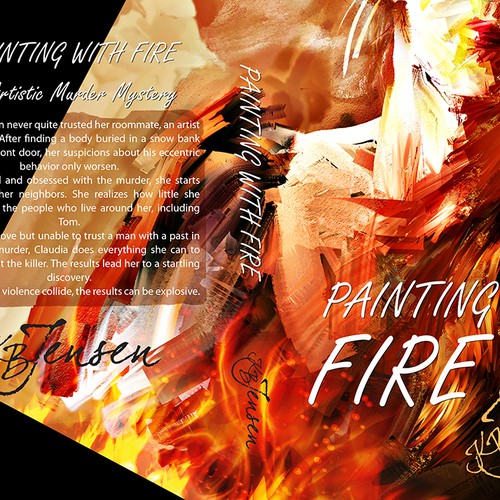 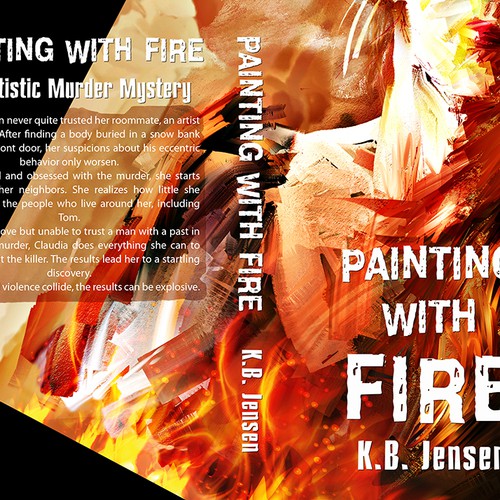 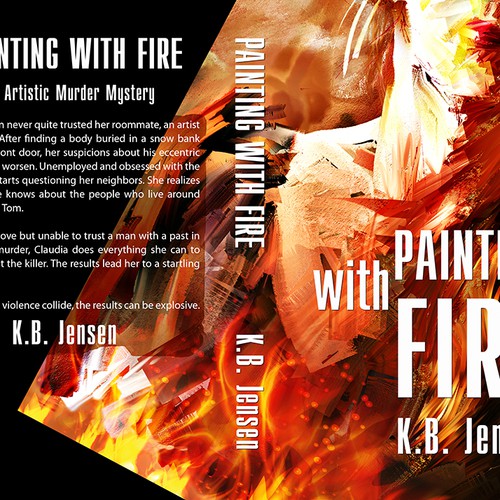 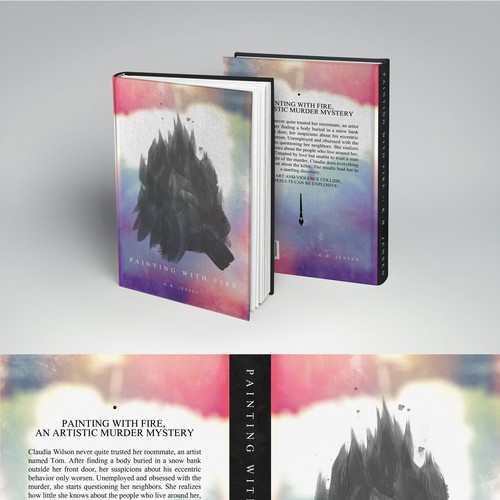 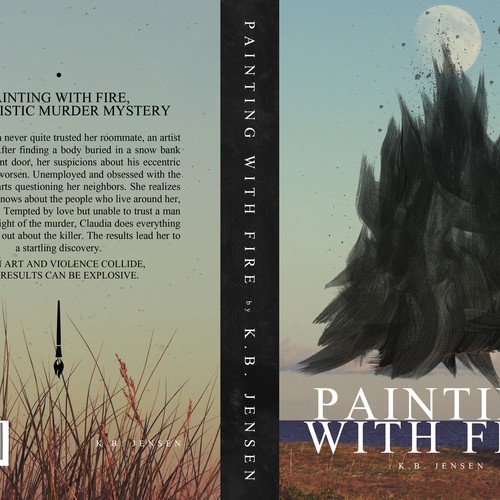 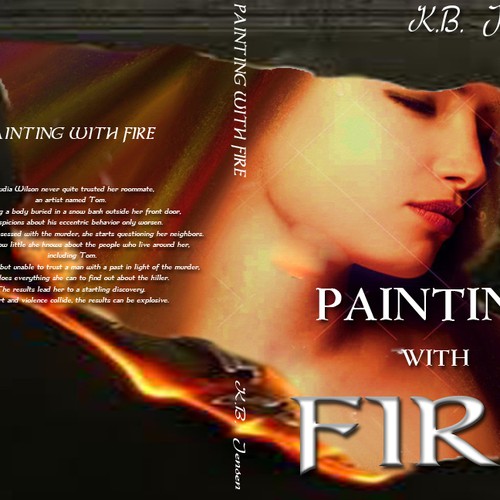 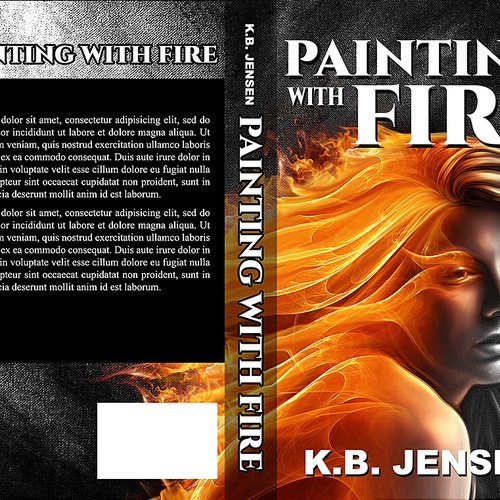 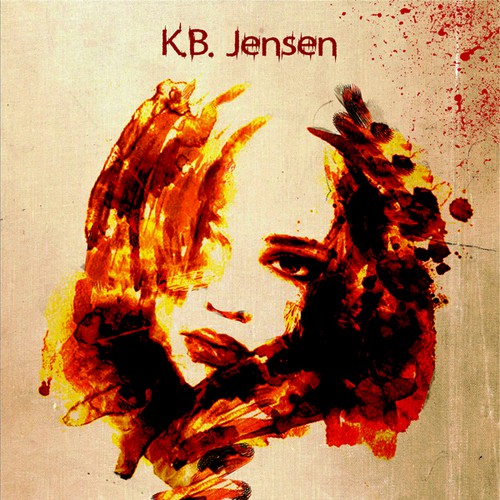 Still determining a name for a new publishing company

My book is gritty murder mystery with a romantic flair. Murder mystery readers are the target audience, obviously.

I’m looking for something simple and compelling that will look good on a thumbnail. I want a full cover with a spine and back, as well as an ebook cover. The book cover should be artistic, because art is an important theme in the story. The book is “Painting With Fire” by K.B. Jensen.

My story is a murder mystery set in contemporary South Side Chicago. One of the main characters is a colorblind artist named Tom. He tends to paint in shades of the same color or black and white. He loves to break into old buildings and paint them. He paints things from dreams, visions he believes are from the future or the past. When he paints the portrait of a murderer and drug dealer nicknamed Angel, he paints her looking like an Angel. The character has blue eyes and blond hair but I don’t know that he would paint her that way. I kind of envision half of her face on the cover and the other half obscured by flames, but I’m definitely open to other ideas, as well. This may also reveal too much about the story. A simpler illustration may be better.

Angel works for a nonprofit and uses an old, abandoned church as a meth lab. She looks sweet, but she’s a vicious killer. She finds out that he has painted her and that he has broken into her meth lab and she sets his apartment on fire. A newspaper photographer takes photos as his entire collection goes up in flames, but some of his paintings are salvaged and they later run an art exhibit together.

Here’s the back jacket copy, which could be changed a bit down the line, but you get the idea.

Claudia Wilson never quite trusted her roommate, an artist named Tom. After finding a body buried in a snow bank outside her front door, her suspicions about his eccentric behavior only worsen.
Unemployed and obsessed with the murder, she starts questioning her neighbors. She realizes how little she knows about the people who live around her, including Tom.
Tempted by love but unable to trust a man with a past in light of the murder, Claudia does everything she can to find out about the killer. The results lead her to a startling discovery.
When art and violence collide, the results can be explosive.

This church is the one that sparked my imagination in the story.

Jetzt starten
Design a book cover for a collection of columns by Detroit News editor Nolan Finley, titled "Little
US$ 499
Dunlap Godard publishes fiction and non-fiction books through print-on-demand and ebook channels....
157
entries
54
designers
RESTYLE MY BOOK COVER INTO A BEST SELLER'S ONE !
279 €
It's a tale about personal growth written through the eyes of a child. Inspiring book to learn how to create our dre...
156
entries
29
Designer
Create an inspiring cover for a new self help book and help it become a classic!
GBP 199
Small publisher of self help books. Just starting up....
30
entries
13
diseñadores
Create an eBook cover for 'The Outsider Tales'
339 AUD
I write books! The target audience is readers of speculative fiction. Book readers in general....
66
entries
17
diseñadores
Memoir: "Yes, and..." In life you must accept, agree, and respond. A True Story.
USD 299
I've written a memoir. It's an inside look during a time of losing my wife, with a responsibility of moving forward f...
188
entries
32
diseñadores
Near death experience book cover
USD 499
We publish books for the Swedish market....
148
entries
29
diseñadores
Erfahren Sie mehr über buch oder zeitschriften cover Design
So funktioniert's