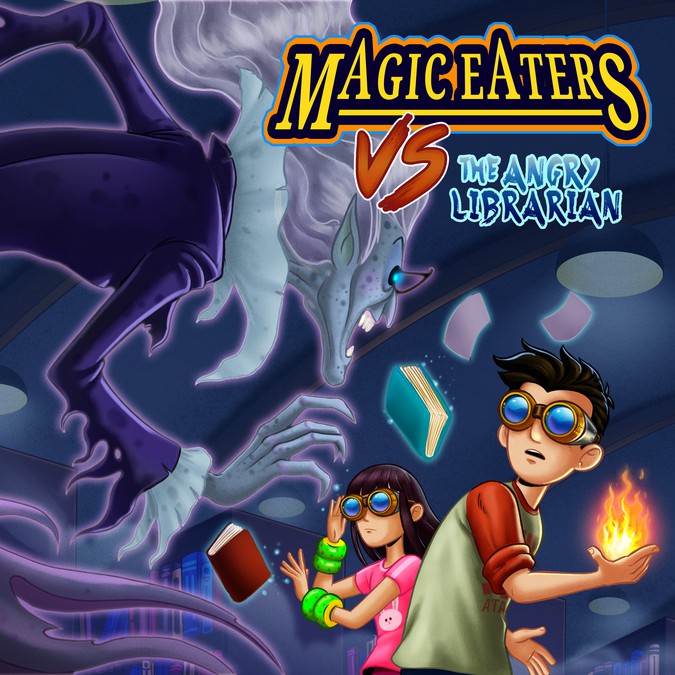 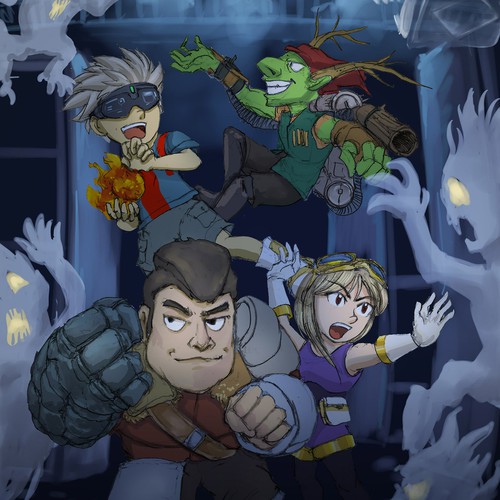 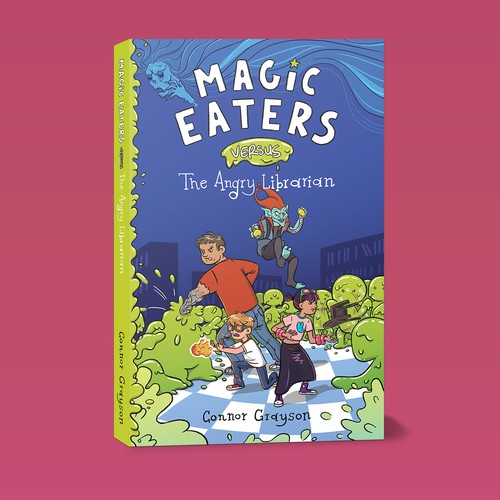 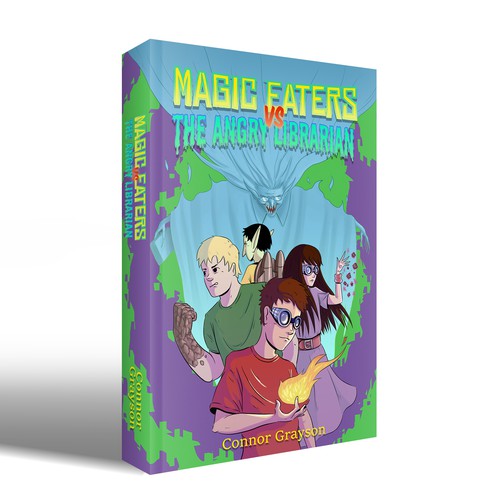 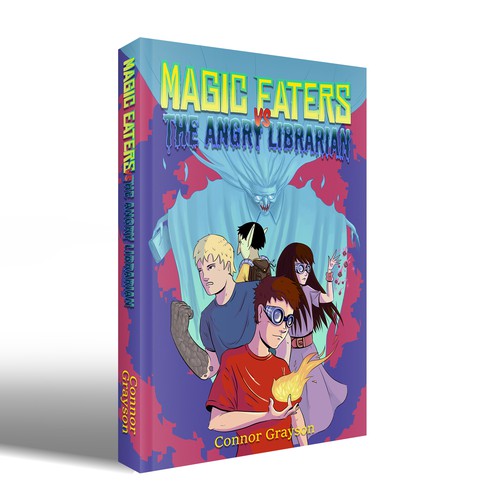 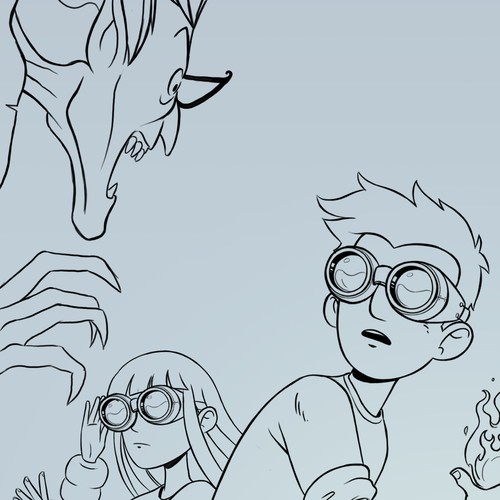 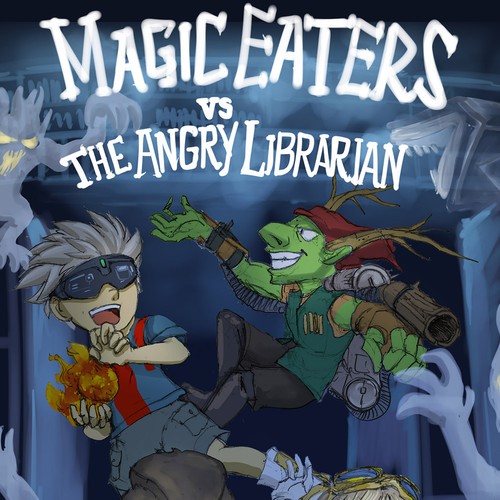 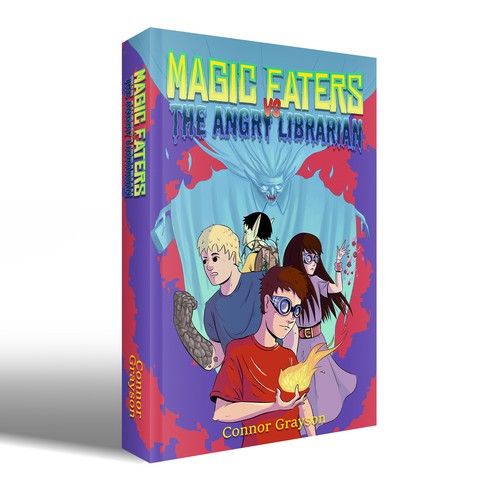 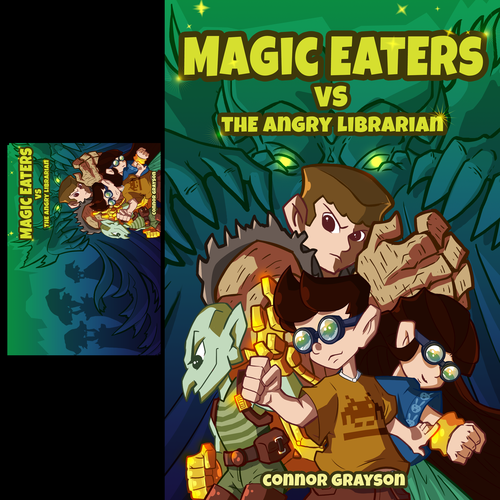 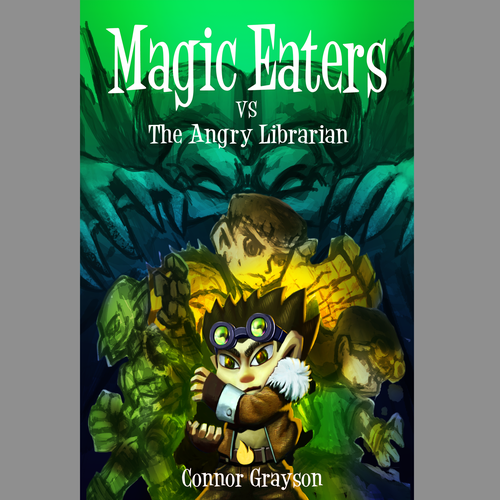 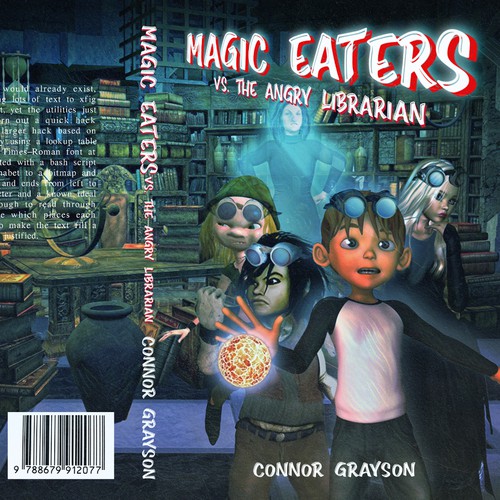 Magic Eaters VS The Angry Librarian

It's like 'Trapped in a Video Game' meets 'Haunting of Hill House'. The book is the story of Charlie & co who gain magical powers by what they consume. They are trapped in a house and have to fight their way through various 'rooms' defeating monsters, ghosts, etc. If they die, they start over and everything changes.

I like the coloring here and the feel of the characters. There's a sense of eeriness and scary.
This gives a good sense of the group of heroes and the monster. It also shows the 'fighting' nature of the group. The comic/video game feel is what I'm looking for.
I like this typography a lot, especially the "Psychonauts" portion. Also, the googles are a good idea of what I'm looking for in my characters and I love that they have the reflection of monsters, etc.
This works great as thumbnail which is important. I also like the comic feel and the 'video game' elements in the typography.
I like the color/lighting here and the action happening with the characters. I find the 'zombie' typography too busy, but otherwise like the balance of text to art.
I like the mixture of coloring here. Also, the overall simplicity of the design. Given it's for Dahl I understand that, but the looming witch over the young boy gives a sense of scary.
The side-by-side nature of the 'villain' and the 'hero' gives this the VS feel I remember from old Street Fighter 2 video games and could see something similar for the VS feel in Magic Eaters.

I'd really prefer colors that lean towards the scary/eerie feel (think Grimm above), but would like to avoid reds.

I'm looking for something with the feel of these comps: Last Kids on Earth by Max Brallier, Trapped in a Video Game by Dustin Brady and A Tale Dark and Grim by Adam Gidwitz.

I like the font Daft Brush by PintassilgoPrints and would like the typography to have a 'video game' type feel to it. Using the 'VS' to give the old 'Street Fighter 2' feel to everything. It's how I see bringing in the 'video game' essence to the book. But I'd like the Magic Eaters type to stand out overall and envision that more across the entire cover with the VS offset and 'The Angry Librarian' smaller and offset to the side. If you google "Psychonauts in the Rhombus of Ruin" I also like the design I see here.

There are four primary characters. The main character is a average looking boy about 12 years old; shorter rather than taller; larger rather than smaller; he's bookish and he wears teal blue swimming type googles with mirrored lenses and a steampunk/magic flare, but only slightly. He can summon fireballs in the palm of his hands and breath underwater.

Secondary character is a girl about 12 years old; an eccentric type; wearing long skirts and t-shirts and partially deflated pool floaties around her forearms; she also wears teal-blue, mirrored goggles. She's telekinetic and likes to 'skip like a bunny'.

Two other secondary characters can be included (if inspired) one is named Grrblin; a goblin, intelligent and fast; he wears a mechanical type backpack with tubing running over his shoulders and down his arms; this will eject projectiles into his hands he can throw normally covered in vines and roots and other alive things. The other is named Stump and he's as wide as he is tall; a tree trunk of a boy; simple, but not stupid; he's a tank and one arms is mobile, but stone and he uses it to bash things.

The four will make a team.

The villian is "The Angry Librarian" and can be 'cliched' with a twist. The Librarian is a ghost/spirit type creature.

The group is in a house that has a thousand doors on the outside, the yard roaming with creatures which look like petrified scarecrows and running jelly blobs. The library has row after row of tables down each side with a circular, elevated, desk which the librarian sits at in the center. The floor looks like a chess board.

I don't want super-realistic characters, but would prefer they have the video game/comic feel to them. I prefer original illustration and not stock images.