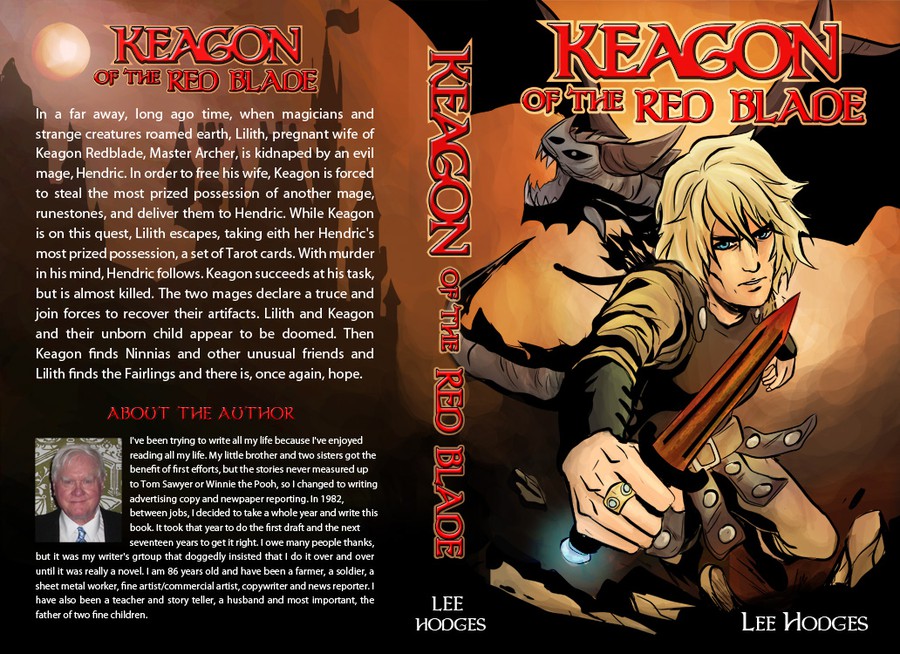 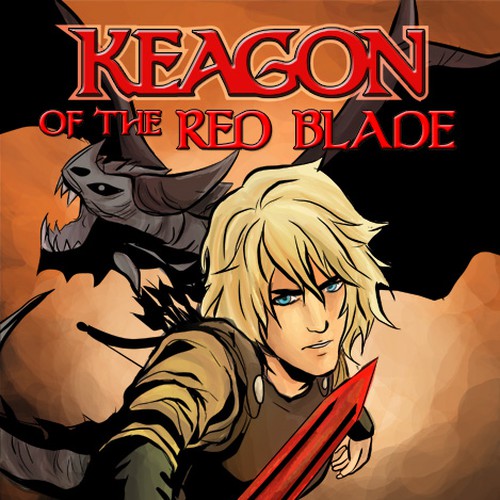 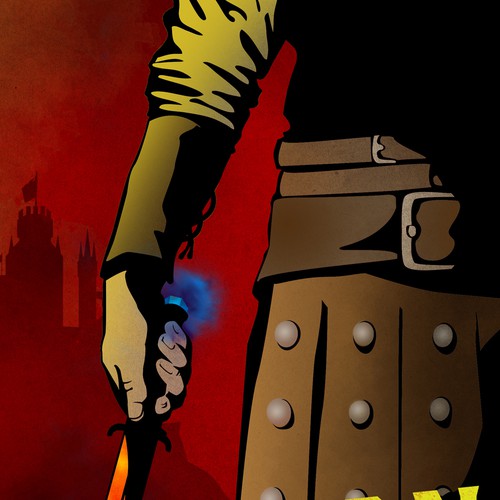 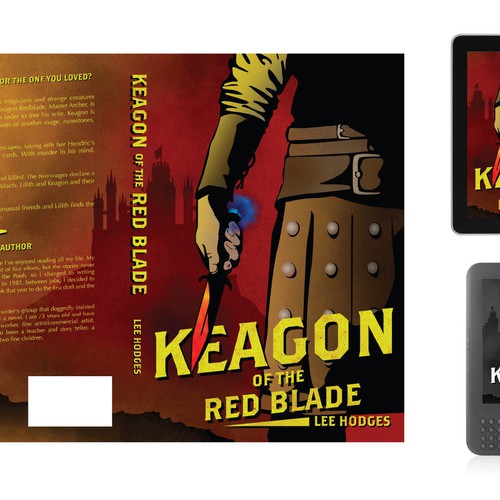 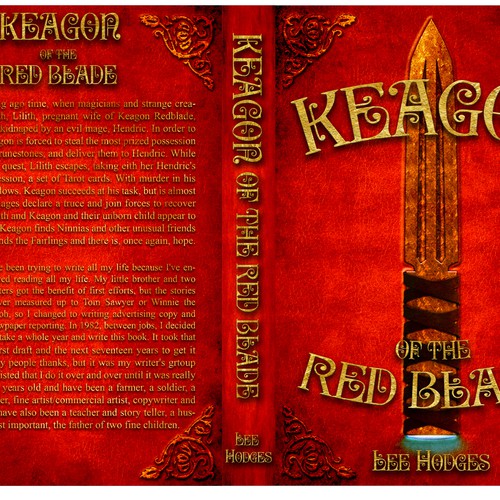 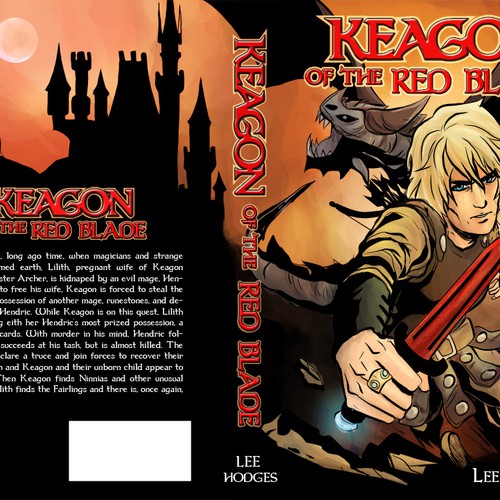 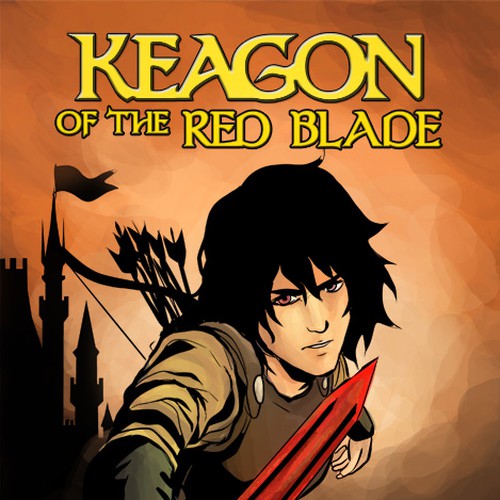 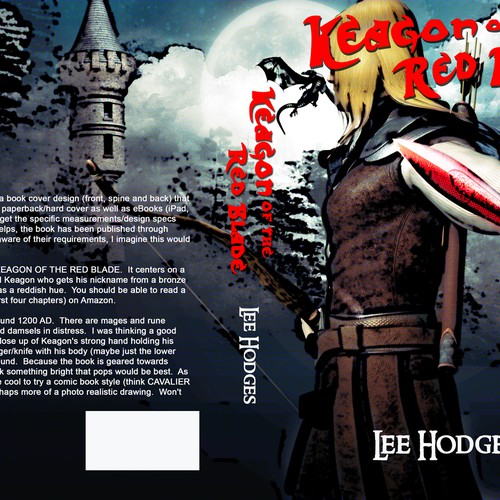 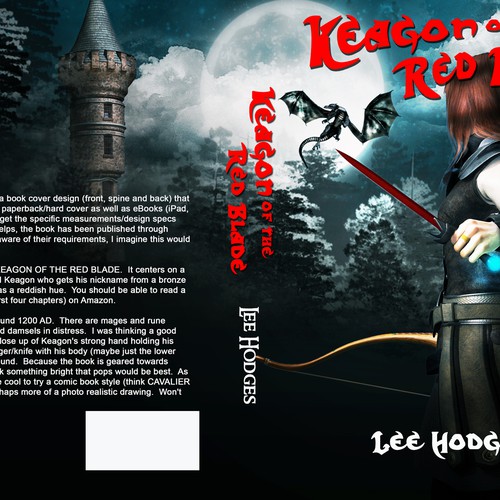 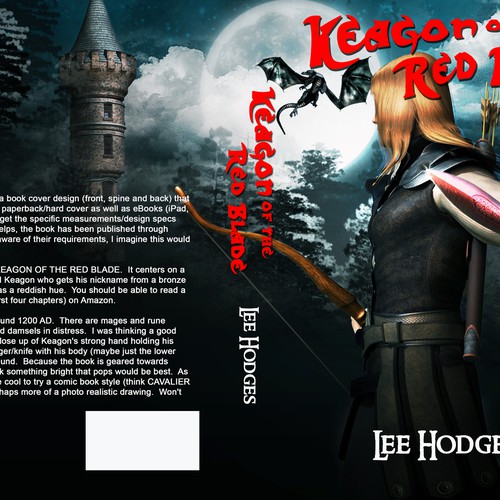 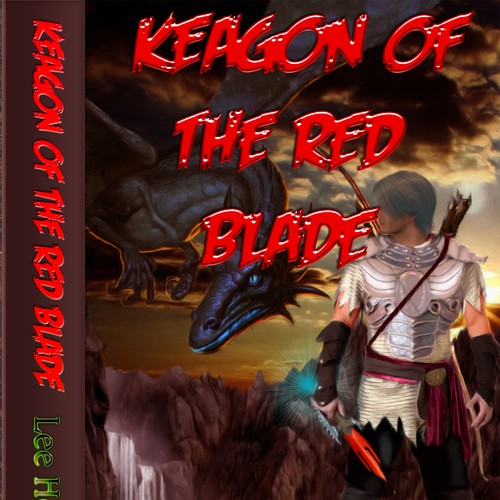 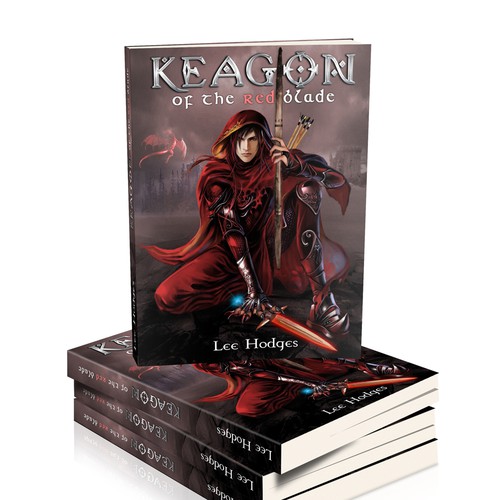 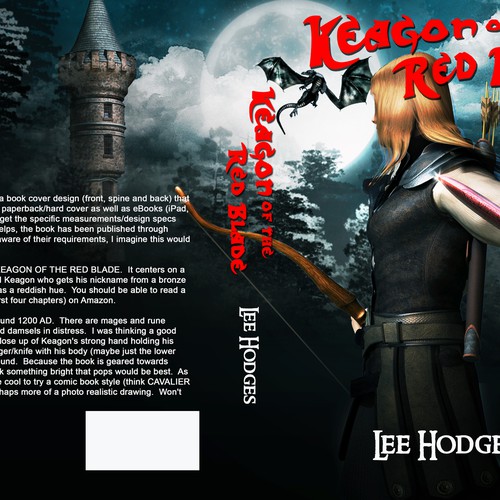 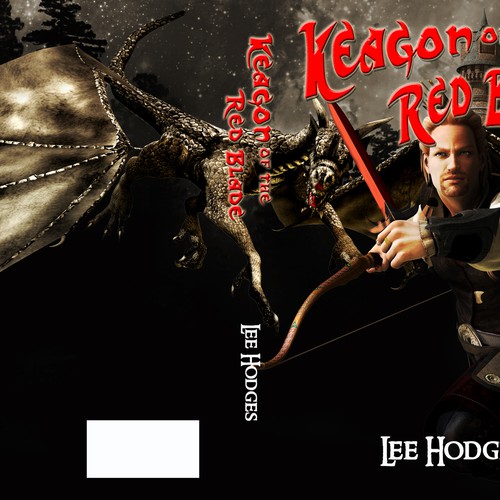 We our solely in business to publish and promote the work of author Lee Hodges.  Lee is an 86-year-old author living in the Washington state area.  He has written five books, three of which he has self-published.  KEAGON is the second book he published and is geared towards a young adult audience.  However, the story is engaging enough to appeal to readers of all ages.

We are looking for a book cover design (front, spine and back) that could work both on paperback/hard cover as well as eBooks (iPad, Kindle, etc.).  I will get the specific measurements/design specs shortly, but if this helps, the book has been published through Xlibris.  If you are aware of their requirements, I imagine this would follow suit.

The book is titled KEAGON OF THE RED BLADE.  It centers on a rugged hero named Keagon who gets his nickname from a bronze bladed knife that has a reddish hue.  You should be able to read a free preview (the first four chapters) on Amazon.

The book is set around 1200 AD.  There are mages and rune stones, dragons and damsels in distress.  I was thinking a good image might be a close up of Keagon's strong hand holding his bronze-bladed dagger/knife with his body (maybe just the lower half) in the background.  Because the book is geared towards young adults, I think something bright that pops would be best.  As for style, it could be cool to try a comic book style (think CAVALIER AND CLAY), or perhaps more of a photo realistic drawing.  Won't know till I see it.

Try different styles if you think of something better.  And I am certainly not stuck on the hand holding the knife, so do whatever you are inspired to do.

A designer asked for more of a description of Keagon.  A very fair question.  Problem is, my dad intentionally left out a physical description of Keagon as he wanted the reader to be able to imagine their own hero.  So I would say he should be mid to late twenties in age, strong in a rugged, athletic way (think David Beckham, not the Rock), and he could be blond, brunette or somewhere in between.

Okay, more details. Keagon would be dressed in the following:

-long sleeved tunic under a sleeveless garment that has small brass plates
attached to it on the front, back and shoulders (like a poor man's breastplate)
-leather skirt or kilt, similar to what the Romans wore, made of strips of
leather
-a wide leather belt to hold the skirt up
-leather leggings
-moccasins (plain with no decoration- think old time Robin Hood)
-on his left arm, he would have an "archers sleeve" which would start at his
wrist and go about 6-8" up his arm (Keagon is a very skilled archer)

-on his right hand, he might have an "archer's tab" which is a piece of
leather that would cover two fingers to prevent injury when pulling back the
bow/arrow
-In addition, he would be wearing a gold ring which is not his wedding
ring. The ring would have a very simple band with no decoration, and some sort
of stone- perhaps a diamond.

As for his "red blade" it would be like this:
-A dagger or knife made out of bronze
about 6" long and 2-3" wide
-very plain with no decoration on blade
-handle would be wrapped leather with special stone on the bottom end
(opposite the knife tip)which glows blue when magic is present*there would be two "blood grooves" on the blade to promote bleeding in the victim
-it would be housed in a plain light brown leather sheath, though the sheath
could be decorated with Celtic designs

I think it would be great for the stone at the butt of the knife handle to be showing, and perhaps glowing at the sign of the presence of magic.

As for a font, I say the skies the limit.  Be creative!  The worst would be to have the same old font that we see on every book of this genre.  Be fanciful.  Think outside of the box, and then rein it in a bit.  I would perhaps put "KEAGON" in larger letters, "of the" in the smallest letters and "RED BLADE" somewhere in between. I attached an image of a font that I think is pretty cool (I think the designer created it especially for this cover) from HOUDINI.  Perhaps it can be used as inspiration.

If you choose to go a different way than the concept suggested above, just be careful not to make the cover look like a romance novel.  That is definitely not what we are looking for.

This book is geared to the Young Adult audience, but should also grab the potential interest of adult readers as well. Think sophisticated, not childish. We have an idea for the cover, but if you are inspired to do something entirely different, we are absolutely open to your imagination!

Bright yet ominous book cover: black-winged Dark Angel who hunts the faithless in the city
US$ 299
Primarily young adult to middle age. Book appeals to both men and women. There are elements of Christian faith in the
163
entries
37
designers
I need a powerful ebook design to stop domestic violence against disabled females
AUD 269
Readers who enjoy reading poetry. Age 16+. Gender; mostly females. Location; globe. Anyone who experienced mental health
14
entries
3
diseñadores
What is your idea of a powerful ebook cover for this book?
279 SGD
Women and men, but mainly women age 28 to 58, single or in a relationship. No specific location.
99
entries
19
Designer
YA Romance cover
199 USD
Teen to adult
104
entries
27
designer
Children’s book illustrated by a four year old to help kids deal with coronavirus isolation
269 A$
Parents and Grandparents of young children 2-8years impacted by the coronavirus. Teachers. Librarians. Child care worker
90
entries
11
designer
Book Cover Design EBOOK and Paperback
£ 319
Someone is reading this book because he wants to explore the vast universe of investment possibilities that the real est
91
entries
18
Designer