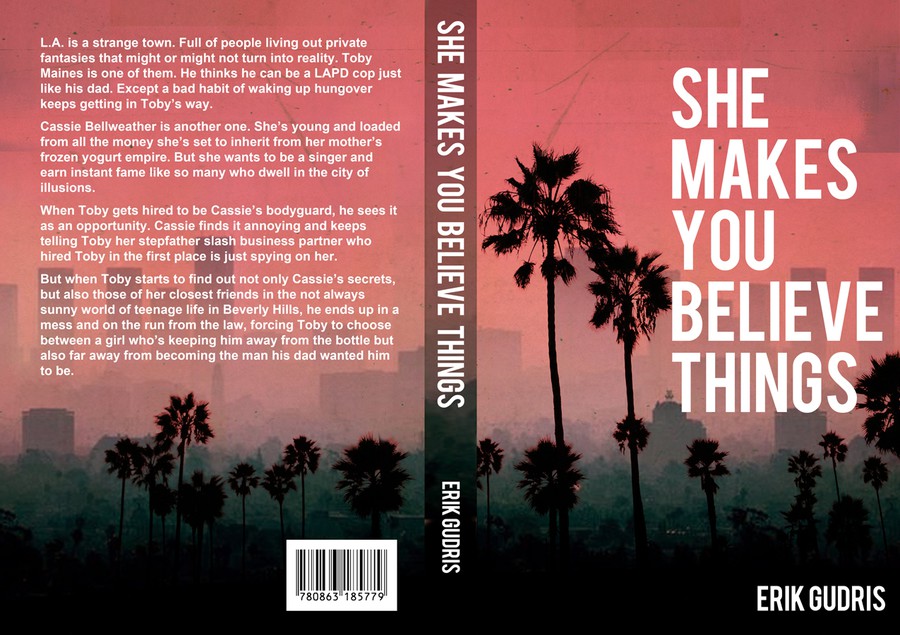 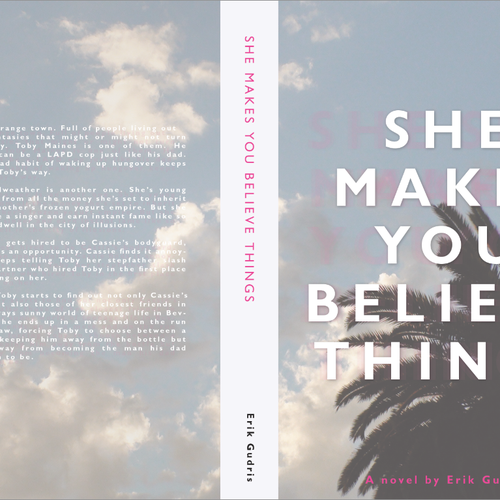 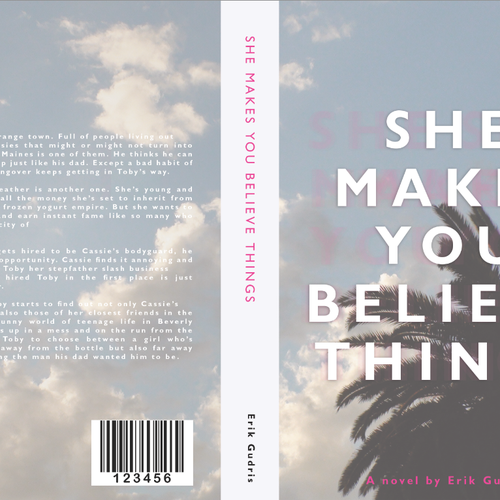 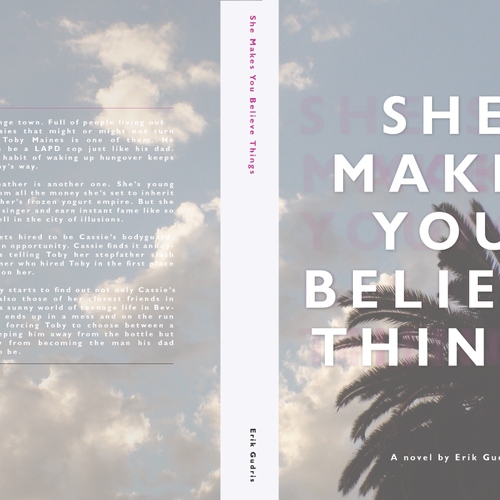 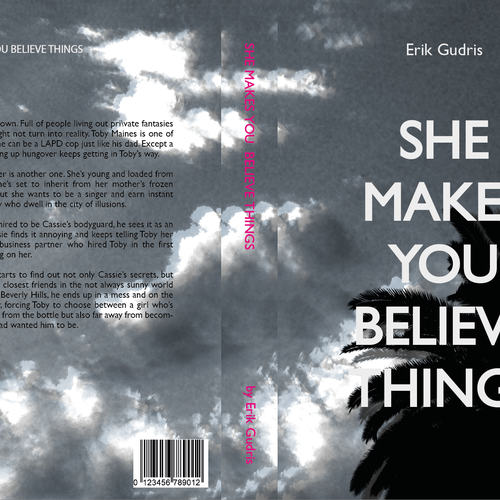 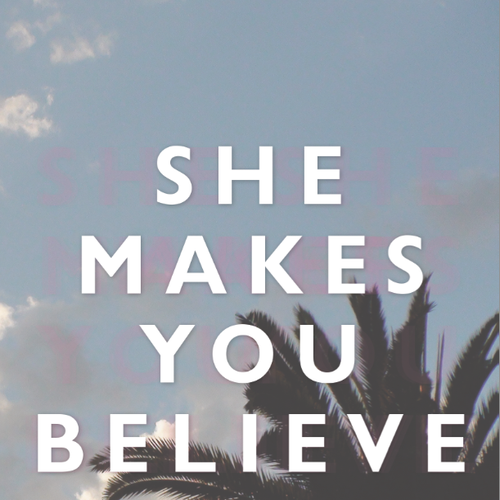 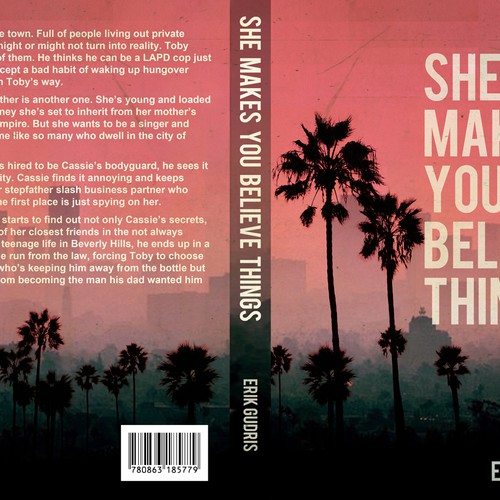 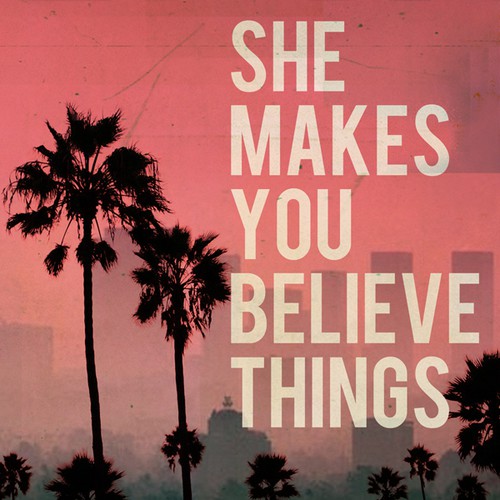 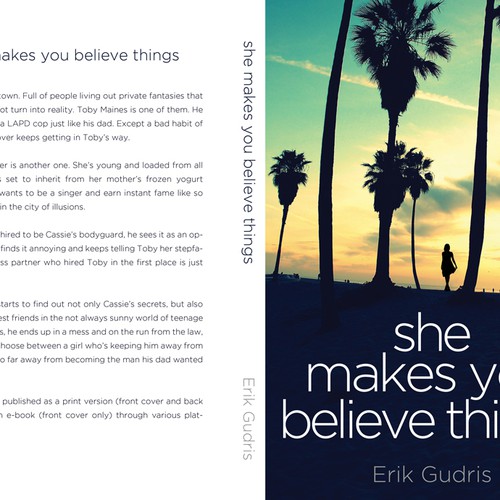 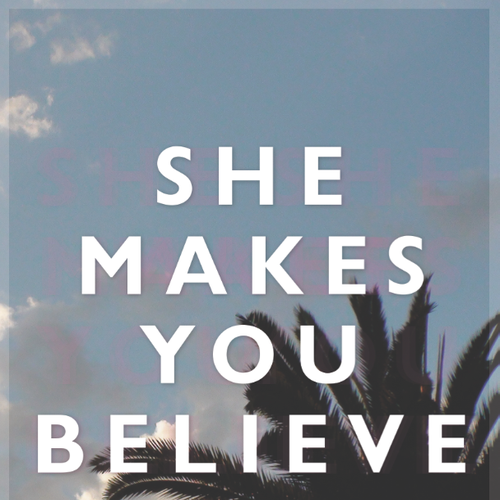 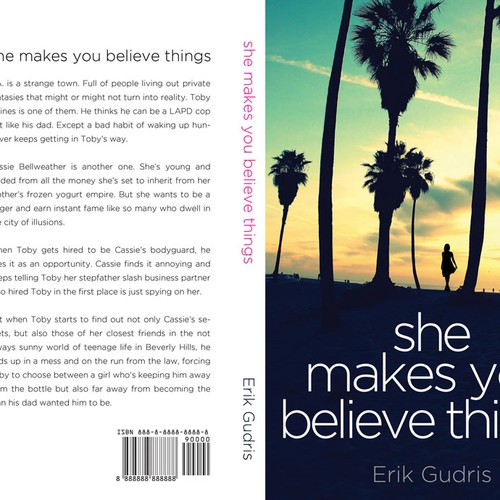 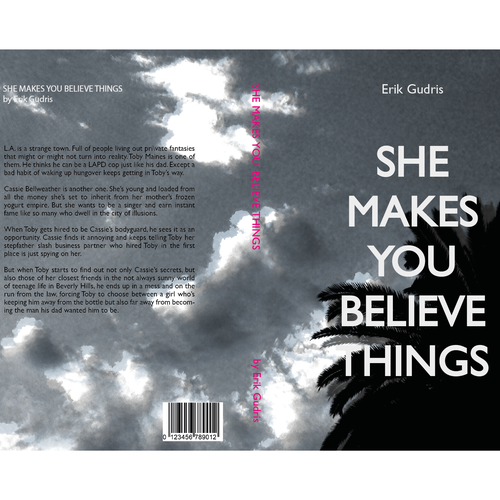 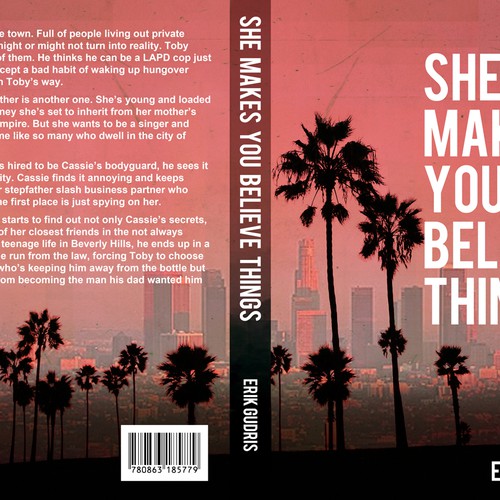 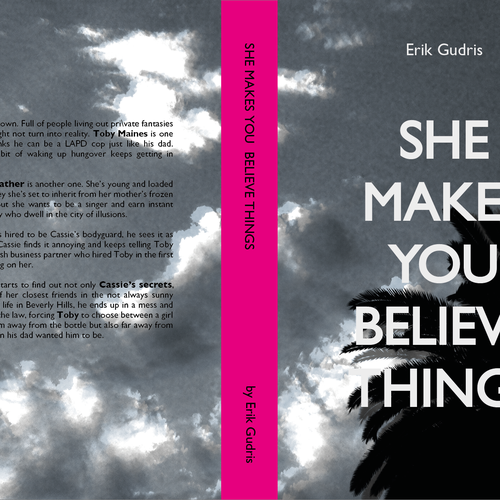 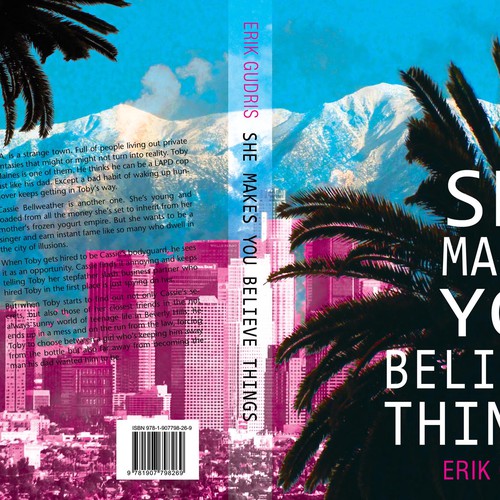 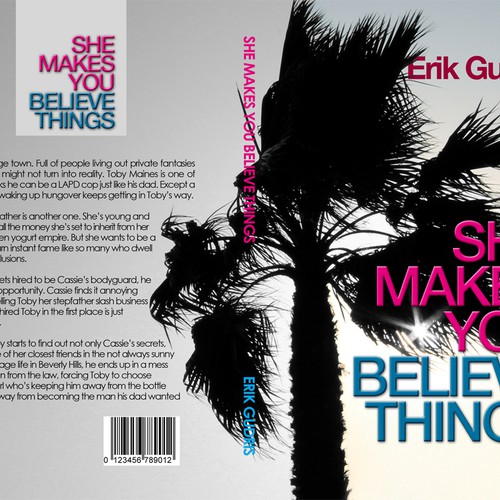 She Makes You Believe Things

"She Makes You Believe Things" is a fiction novel that I am planning to publish later this year. The book is set in Los Angeles in the year 2007 and follows an aspiring cop who gets involved first professionally and then personally with a young Beverly Hills heiress. I would describe the novel as "L.A. Noir" and would like the book cover to evoke that phrase in some way.

Here is the synopsis:

L.A. is a strange town. Full of people living out private fantasies that might or might not turn into reality. Toby Maines is one of them. He thinks he can be a LAPD cop just like his dad. Except a bad habit of waking up hungover keeps getting in Toby’s way.

Cassie Bellweather is another one. She’s young and loaded from all the money she’s set to inherit from her mother’s frozen yogurt empire. But she wants to be a singer and earn instant fame like so many who dwell in the city of illusions.

When Toby gets hired to be Cassie’s bodyguard, he sees it as an opportunity. Cassie finds it annoying and keeps telling Toby her stepfather slash business partner who hired Toby in the first place is just spying on her.

But when Toby starts to find out not only Cassie’s secrets, but also those of her closest friends in the not always sunny world of teenage life in Beverly Hills, he ends up in a mess and on the run from the law, forcing Toby to choose between a girl who’s keeping him away from the bottle but also far away from becoming the man his dad wanted him to be.

The novel will be published as a print version (front cover and back cover) and as an e-book (front cover only) through various platforms.

I have attached a photo that I own the rights to. It's the same photo used on the website. I really like this photo and though I think it would make a good background image for the book cover, you are NOT REQUIRED to use it if you can come up with a more compelling comp based on your own ideas and the information I've given you.

A book trailer I created can be viewed here --
http://www.youtube.com/watch?v=0opuTEk-BZ4

I have also attached the first few chapters if you want to look at them.

Thank you in advance and looking forward to working with you!
Erik

Regarding use of the photo I supplied, feel to change the direction of the image, i.e. the palm tree could be at the bottom with the sky on top.

Regarding the font and color of the book's title, I am partial to it being a "hot pink", "magenta" or similar color as used on the website and the book trailer titles.

Create the book covers for HOT, new trilogy that is going global!
449 $US
My name is Andrea Smith and I have written a contemporary romance trilogy known as 'the Baby Series.' It is…
117
entries
31
designer graphistes
Help "Presidential Shift" Book 4 of the Corps Justice Series with a new book or magazine cover
299 US$
The Corps Justice Novels tell the story of former U.S. Marine SSgt Cal Stokes and his company Stoke Security…
52
entries
6
diseñadores
Help Erin Mayes with a new book or magazine cover
US$ 299
I'm a novelist
135
entries
43
designers
Create the next book or magazine cover for Post Hoc Publishing
$ 299
small publisher of eBooks
37
entries
16
Designer
Fun Cover Needed for Essay Book
US$ 299
I am a writer planning to self-publish a book of entertaining essays about family.
116
entries
17
designers
Moving book cover required for book about an orphanage in Romania
199 GBP
Ebooks...
442
entries
73
diseñadores

Jetzt starten
Design an irresistible, powerful, book cover for a political thriller set in Paris
US$ 499
Self Publishing THE PARIS PLOT, a novel (www.theparisplot.com) through Oakhurst Print, my company. Publisher of ficti...
147
entries
34
designers
Last Call America, Book Cover
499 US$
Book Publishing...
43
entries
16
diseñadores
Sexy book cover for A Call to Heaven, by Jo Kessel
209 GBP
A Call to Heaven is a novel. It's commercial women's fiction with a paranormal twist....
102
entries
15
diseñadores
Create a bold fantasy YA cover for the second book in a series
£ 209
I publish my fantasy series for YA readers, and mentor other fiction authors to their success....
75
entries
13
designers
Looking for a real Show Stopper for my Burlesque ebook series
350 US$
Erotic Romance ebooks...
119
entries
24
diseñadores
Design front and back cover for post apocalyptic young adult novel (series)
799 $US
Post apocalyptic young adult thriller...
58
entries
18
designer graphistes
Erfahren Sie mehr über buch oder zeitschriften cover Design
So funktioniert's