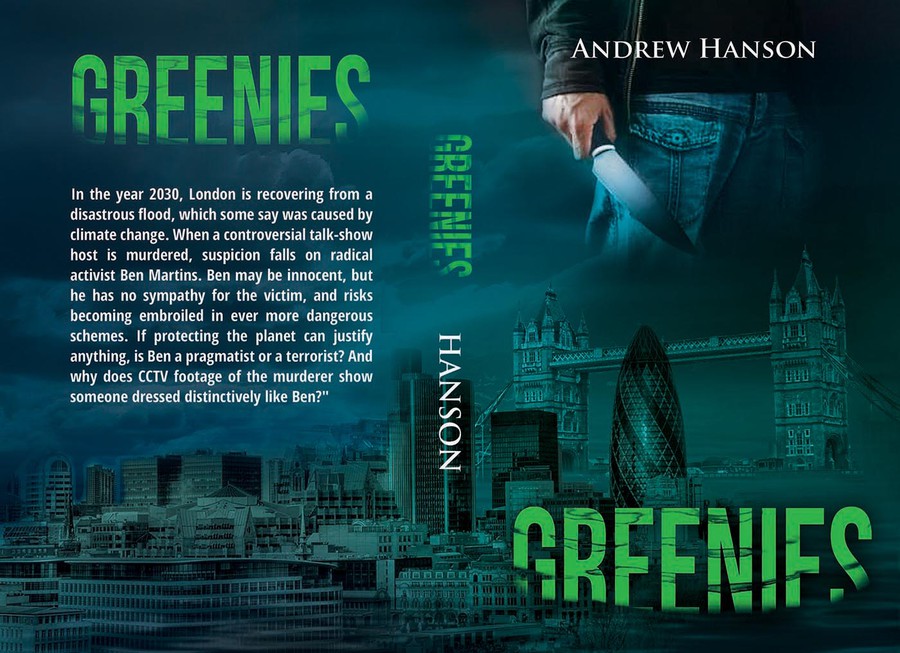 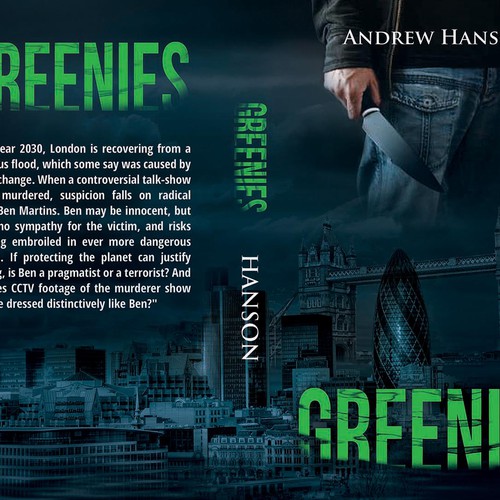 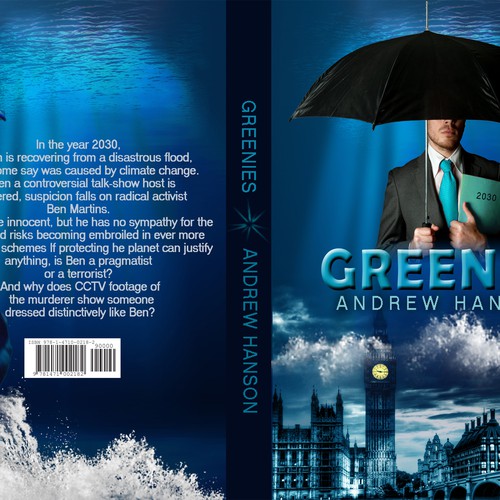 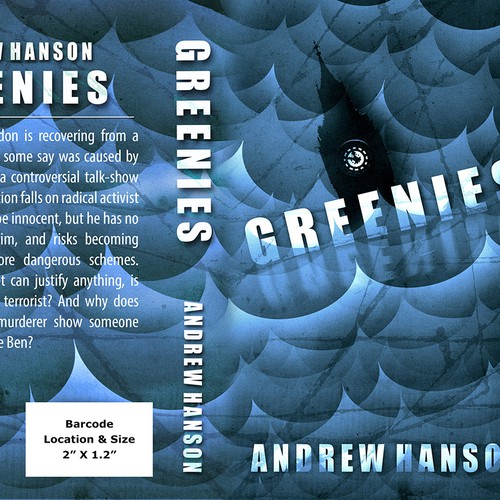 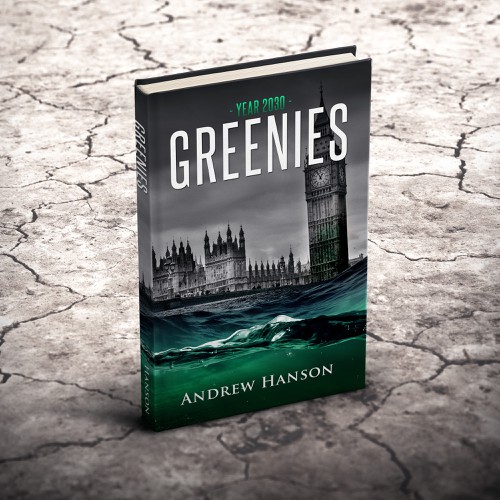 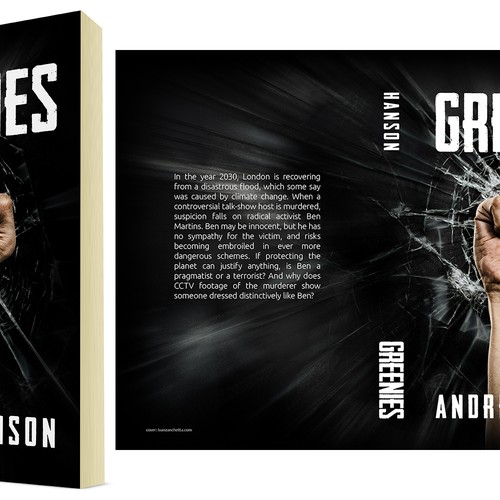 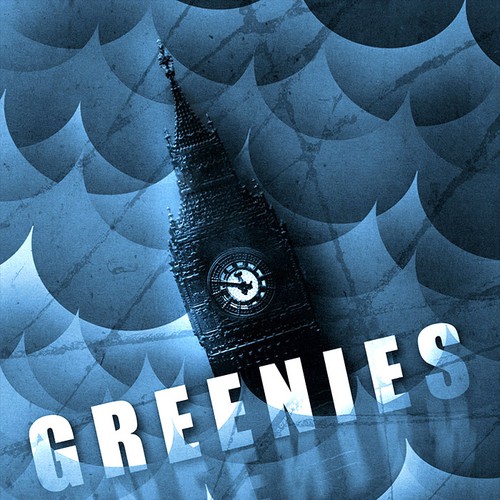 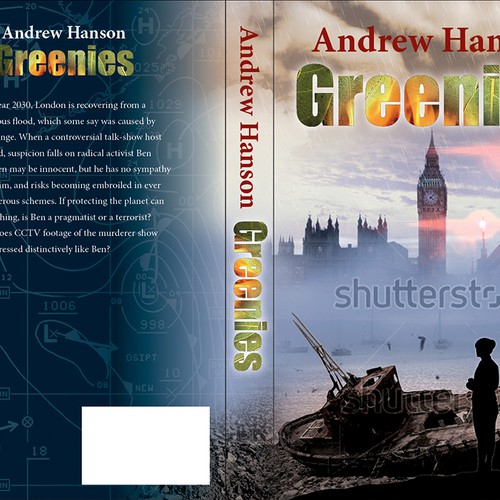 My novel, "Greenies", is a thriller with serious environmental themes set in London in the year 2030, three years after a disastrous flood. It is not science fiction; the world is recognisably our own, and it is character and issue driven. The target audience is readers of intelligent commercial fiction, and anyone interested in the issues surrounding environmentalism and extremism.

I require a book cover for a paperback novel.
The front cover must include:
- the title, "Greenies”
- my name, Andrew Hanson
- suitable imagery. This might include, but would not be limited to, images of possibly violent public protest, the anger on a protester’s face, the aftermath of a flood of central London, or other imagery relating to climate change or extremism. Or none of those things, if you can think of something that communicates and looks better!

The spine must include:
- the title, "Greenies”
- my surname, Hanson

The rear cover must include:
- the following text:
"In the year 2030, London is recovering from a disastrous flood, which some say was caused by climate change. When a controversial talk-show host is murdered, suspicion falls on radical activist Ben Martins. Ben may be innocent, but he has no sympathy for the victim, and risks becoming embroiled in ever more dangerous schemes. If protecting the planet can justify anything, is Ben a pragmatist or a terrorist? And why does CCTV footage of the murderer show someone dressed distinctively like Ben?"

This text should be double justified and in a sans-serif font of your choosing.

Note that there should be a non-critical area to be covered by a barcode and ISBN number on the lower right hand corner of the rear cover. The cover image should be at least 300 DPI for good quality, and the maximum file size is 40 MB. The file type must be PDF.

Here is a synopsis of the book. It's only 600 words, so please read it! This is the best way for me to communicate what the book is about, and give you an overview of the plot. Note also that I will often be away from my email until Monday the 14th of July. I will respond to any queries as best I can, but it may take me a couple of days.

The year is 2030, three years after a flood engulfed central London, a flood that may have been caused by climate change. Militant environmentalist Ben Martins is being interviewed by the police on suspicion of murder. The victim, Ron Boothby, was a climate change denier and talk-show controversialist. Although CCTV shows the killer was dressed in the same distinctive clothing which Ben wore on a major protest, the police have insufficient evidence to charge him. Ben is desperate to have a political impact, but risks alienating people with the strength of his views. Meanwhile the lead detective, Paskins, recalls his traumatic experience of the flood, when he failed to rescue a drowning child.
At a party Ben meets Sunita, who finds his fearlessness and commitment attractive, but is annoyed by his intellectual musings and refusal to soften his stance. Although Ben's politics seem anti-human, it's clear that on a personal level he needs someone to look out for him. A school biology teacher, Sunita is affectionate but responsible, and not given to taking the law into her own hands.
Ben is involved with a campaign group, "Action for Climate Justice". Theo, who Ben met at university, is a more extreme member of the group, controlling but bright and capable. He and Ben carry out an arson attack on a luxury car showroom. Later Ben receives a blackmail note about the murder, though he is clueless as to who it might be from.
Ben tells Sunita about his fears for the future, an earth seething with humanity and wracked with environmental disaster, where there is little genuine or natural left. His campaign group is having frustratingly little impact. The loss of Ben's job leaves him angry and directionless, and he is persuaded by Theo to go ahead with the bombing of a new oil refinery, without Sunita’s knowledge. Meanwhile Paskins struggles with unresolved guilt.
When buying a present for a friend at a green store, Ben finds out that Theo purchased the same campaign sweatshirt design that was worn by Boothby's killer. On the way to the refinery, Theo tells Ben that his former partner Romana died in the flood, giving Theo a motive for murdering Boothby. As he is about to place his explosives, Ben sees a refinery worker near the spot of the anticipated blast. His conversations with Sunita have made him realise that there is some inherent value to human life, and he knows now that the bombing will be murderous and ultimately futile. He retreats and drops his bomb in a ditch. Later Sunita pulls up by the same ditch in her car: Ajit her stalker ex-boyfriend has told her what he overheard about the plot, hoping it will ruin her relationship with Ben.
It dawns on Ben that Theo murdered Boothby, and framed him. This leads to a fight. Ben fears that he will be cut off at the river, but ironically, after months of drought it is running dry, and he escapes. Sunita drives past Ben, and they return to the refinery together. Showing remarkable courage, Ben disarms Theo's bomb, retrieves his own device, and dumps it in a field. Seconds later Theo detonates it remotely. Ben is hopelessly sorry about upsetting Sunita, but he still believes logic can justify his behaviour. Though she admires Ben's bravery, Sunita is furious about the danger he put them both in, and ends their relationship. After some undercover police work pays off, Theo is arrested and charged. Paskins identifies with Theo's anger and breaks him down. Theo confesses.