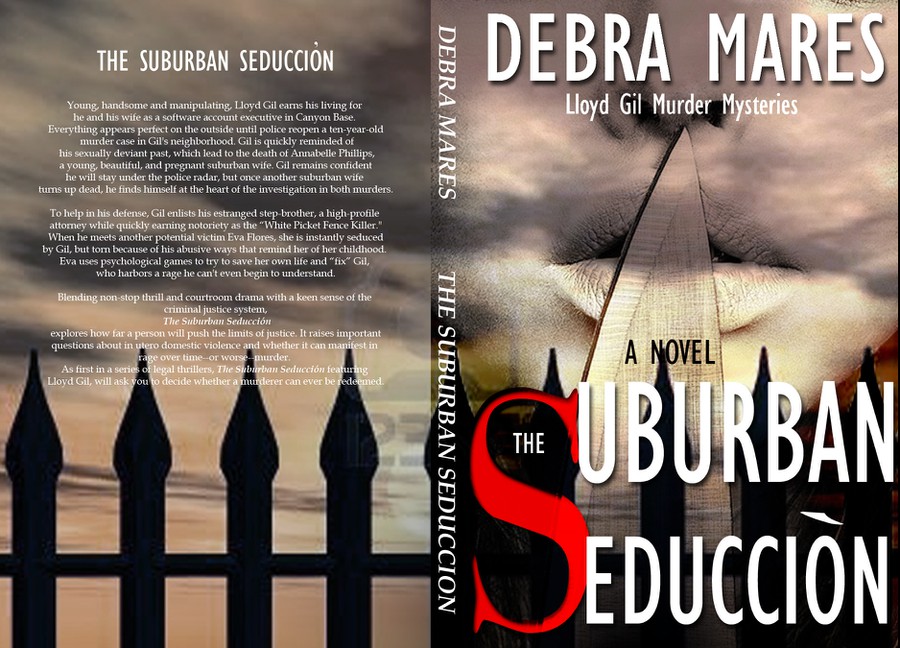 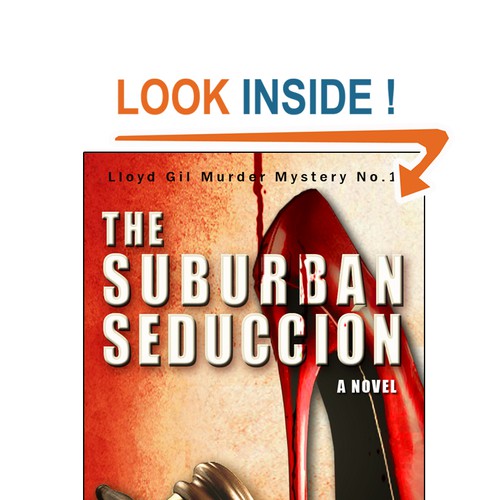 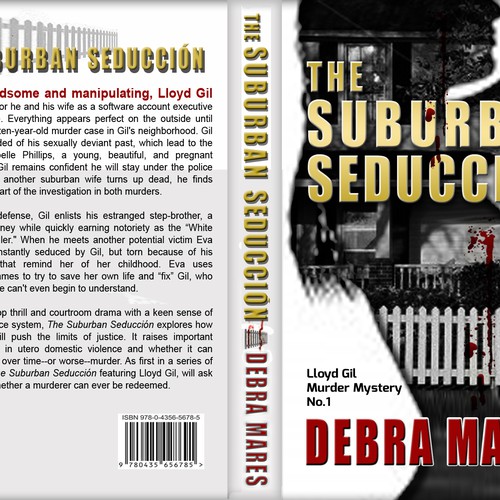 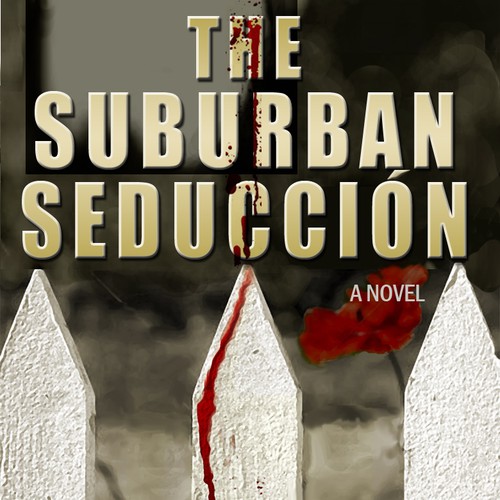 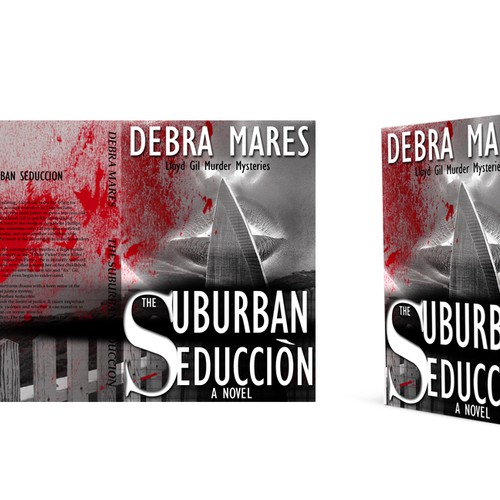 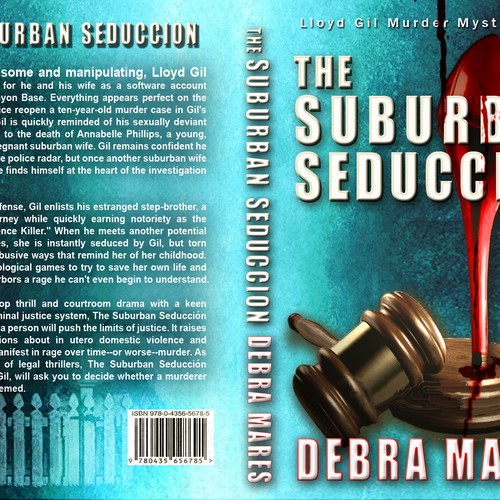 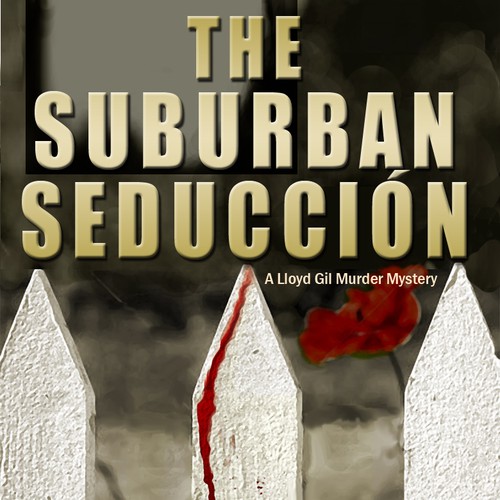 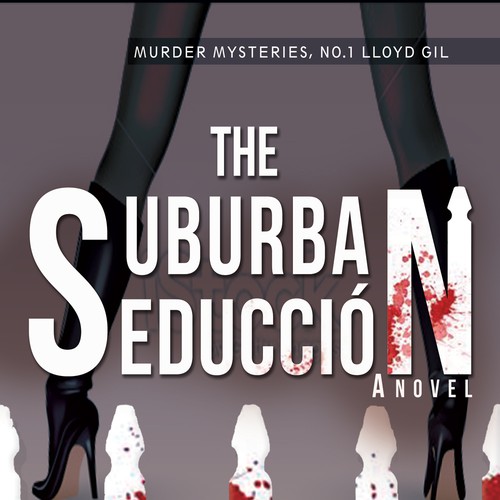 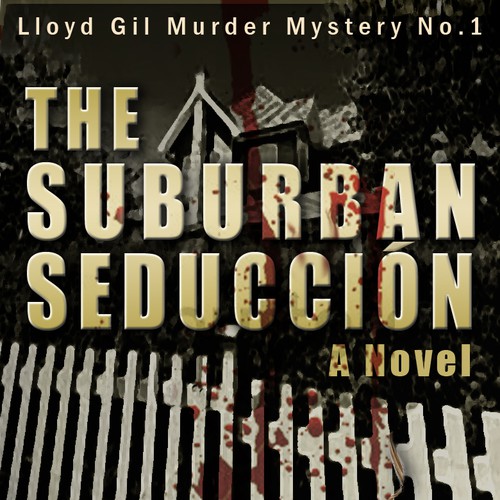 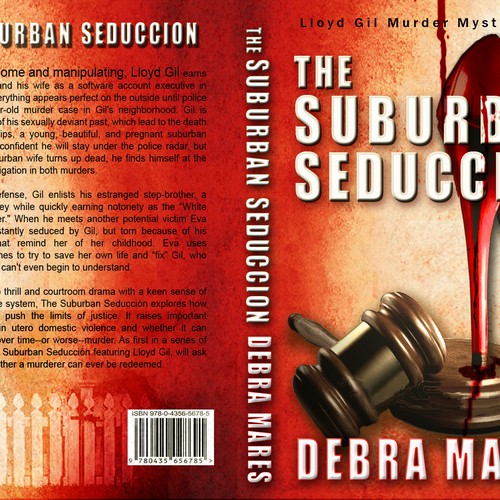 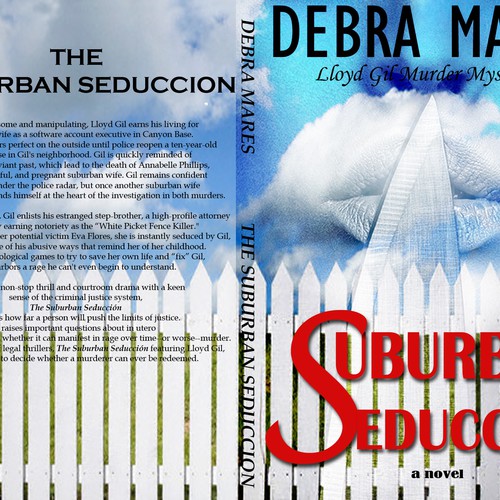 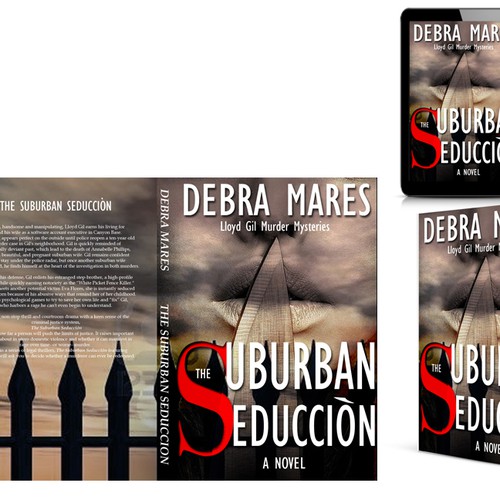 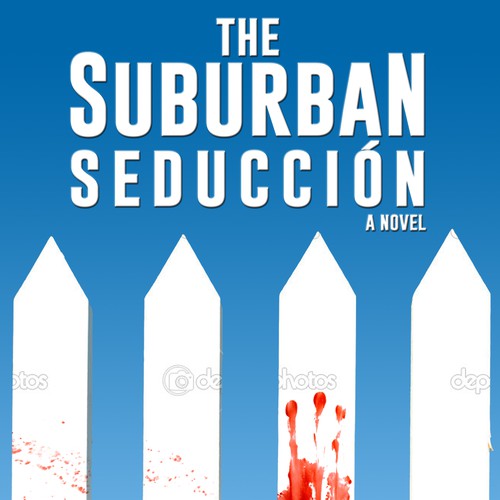 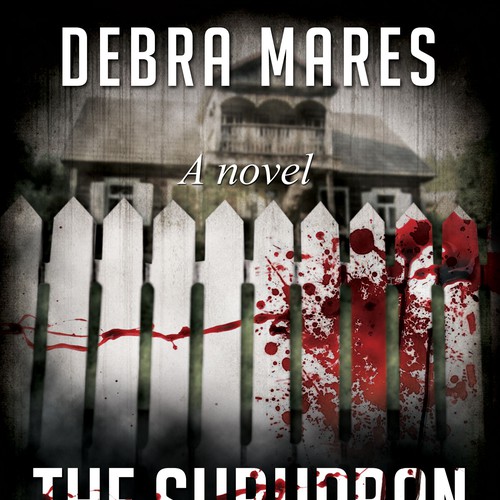 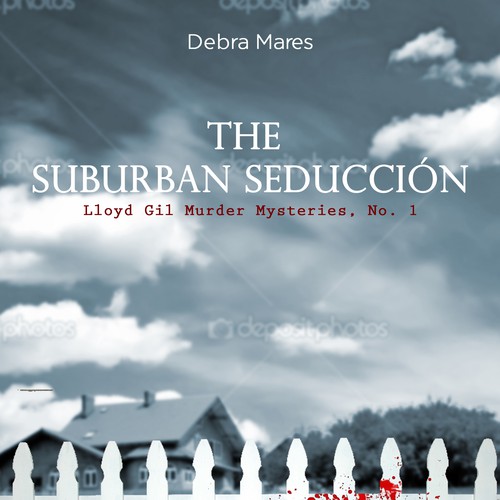 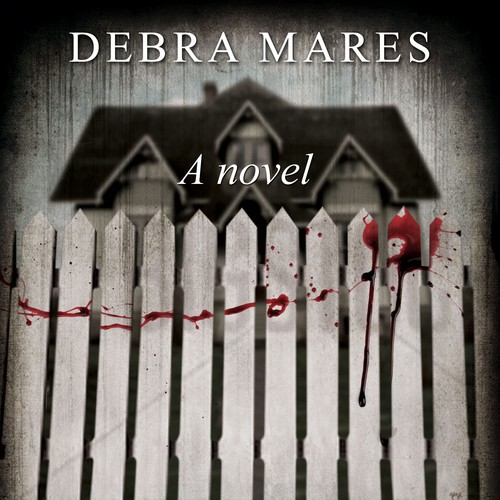 I am looking for a book cover design (ebook) for The Suburban Seducción, a novel (Lloyd Gil Murder Mysteries, No. 1). Ideally, it would have a suburban house with a white picket fence in front with a blonde hair lock and blood stain on the white fence or something else to capture the meaning of this book. I'm open to all ideas, but want to convey it's a murder mystery/legal thriller. Here's a synopsis that can go on the back: Young, handsome and manipulating, Lloyd Gil earns his living for he and his wife as a software account executive in Canyon Base. Everything appears perfect on the outside until police reopen a ten-year-old murder case in Gil's neighborhood. Gil is quickly reminded of his sexually deviant past, which lead to the death of Annabelle Phillips, a young, beautiful, and pregnant suburban wife. Gil remains confident he will stay under the police radar, but once another suburban wife turns up dead, he finds himself at the heart of the investigation in both murders.

To help in his defense, Gil enlists his estranged step-brother, a high-profile attorney while quickly earning notoriety as the “White Picket Fence Killer." When he meets another potential victim Eva Flores, she is instantly seduced by Gil, but torn because of his abusive ways that remind her of her childhood. Eva uses psychological games to try to save her own life and “fix” Gil, who harbors a rage he can't even begin to understand.

Blending non-stop thrill and courtroom drama with a keen sense of the criminal justice system, The Suburban Seducción explores how far a person will push the limits of justice. It raises important questions about in utero domestic violence and whether it can manifest in rage over time--or worse--murder. As first in a series of legal thrillers, The Suburban Seducción featuring Lloyd Gil, will ask you to decide whether a murderer can ever be redeemed.

"a Novel" should be written after the title of the book and "Lloyd Gil Murder Mysteries" somewhere if it fits on the front so the reader knows it's part of a series. The title and author name DEBRA MARES should be big enough to stand out and bold so it can be seen by readers in a thumbnail.

The Despicable Mr. Altright
299 $
30
entries
9
Designer
Young Isambard - create cover design for the next Harry Potter
339 £
Self publish novels Target audience (of current series) is "Young Adult"/"Middle Grade" (Male and Female age 10 to 1...
101
entries
19
Designer
JFH Summer Coloring Book Cover Design
$799
Fairies, singing fish and friendly female dragons meet high-tech, clean, contemporary design.
155
entries
15
デザイナー数
Create a tremendous cover for Paranormal / sci-fi novel, second in "The Ethereal Vision" series.
EUR 500
The title of the novel is "Rise". It is a story about teenagers with psychic powers.
109
entries
15
diseñadores
I have an awesome sci-fi book! can you make an awesome scifi book cover?
400 US$
Need a kick-butt book cover for the second book in my post-apoc sci-fi series. Are you a scifi artist? Jump on in!
127
entries
25
diseñadores
Create an iconic sci-fi fantasy book cover.
GBP 559
I've been writing a novel called 'Pieces of Infinity' that combines fantasy, science fiction and thriller elements. I...
135
entries
21
diseñadores

Jetzt starten
Threads of The War book covers
US$299
I write historical fiction novels....
44
entries
11
diseñadores
Epic Fantasy Novel Cover
$ 299
I am an independent author that tries to write epic fantasy novels!...
56
entries
8
Designer
Design book cover for "The War-Bringer" by an Indie Author .
499 US$
I'm an independent author looking for a design for a book cover....
74
entries
11
diseñadores
What would make you read this important book?
US$299
I am an author of young adult and middle grade fiction. Many of the books I write have justice oriented themes. The c...
87
entries
31
diseñadores
fantasy cover for first book in YA 5 book series
US$299
I am an author who writes young adult, fantasy paranormal novels with romance and epic adventure....
53
entries
11
diseñadores
"The Critic," a literary thriller needs a killer book cover!
US$299
Hello Designers! I am looking for a book cover. It falls under the literary genre, but with a thriller element. M...
73
entries
22
diseñadores
Erfahren Sie mehr über buch oder zeitschriften cover Design
So funktioniert's