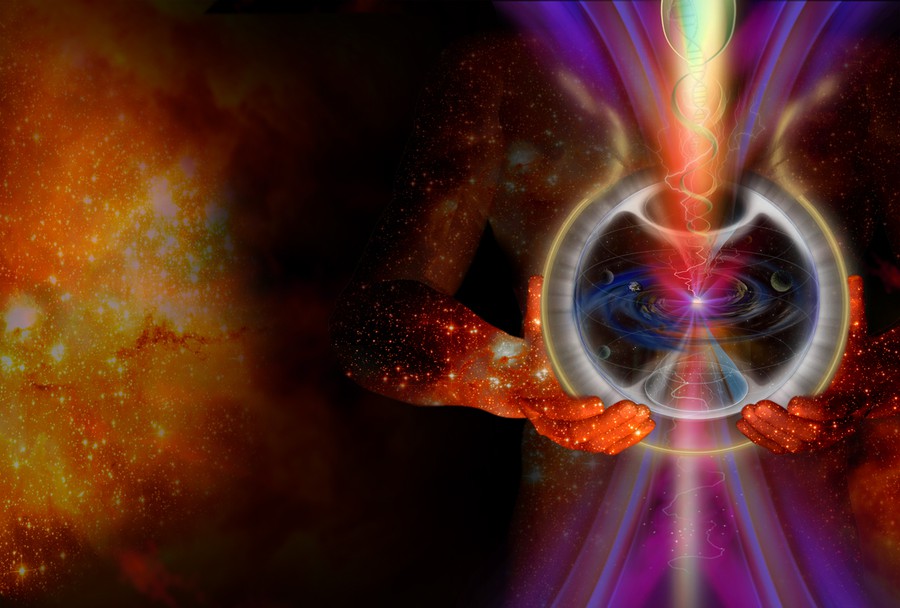 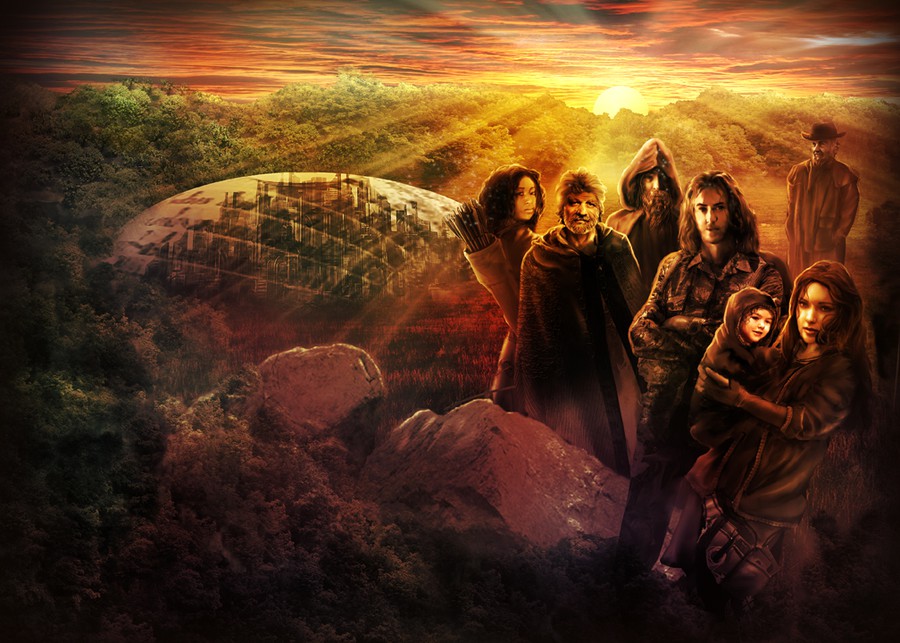 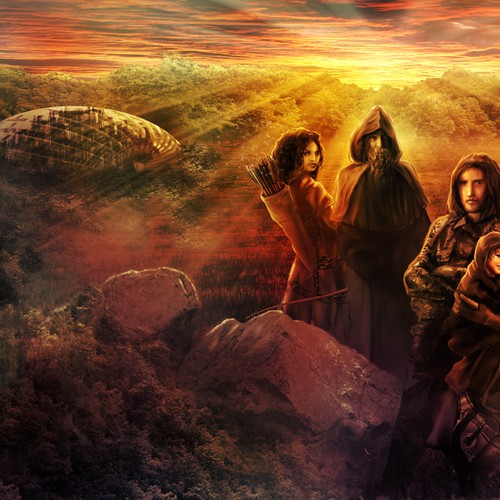 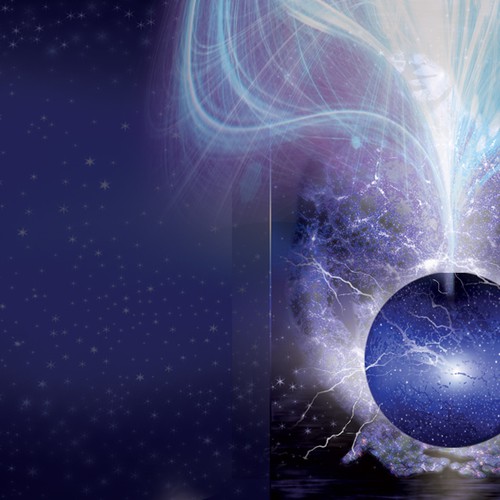 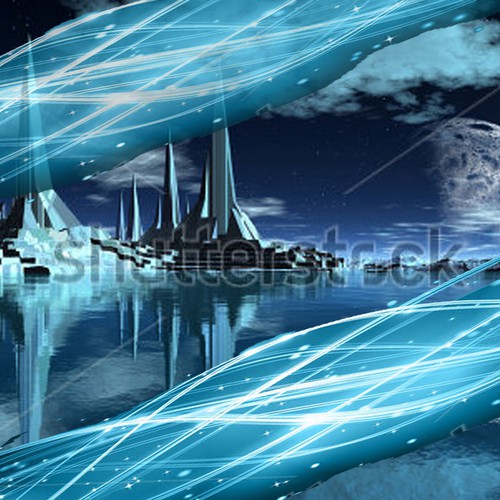 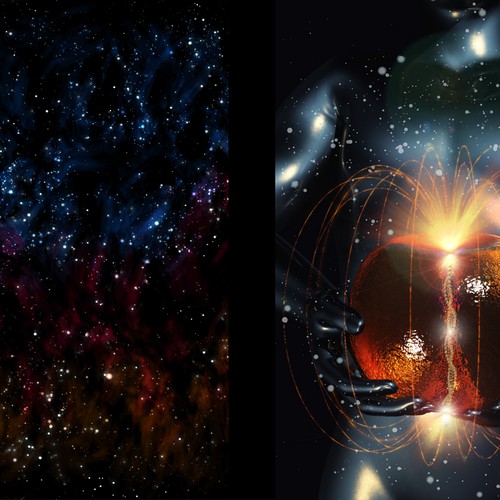 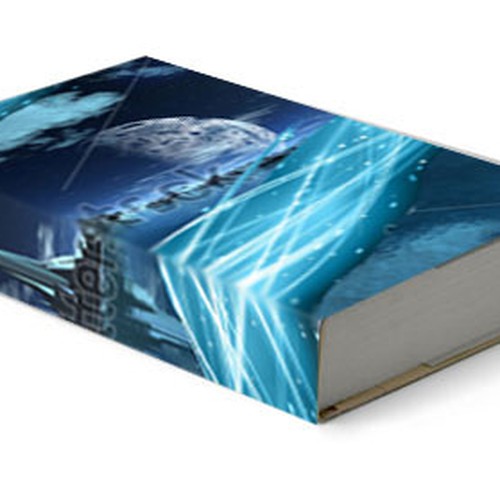 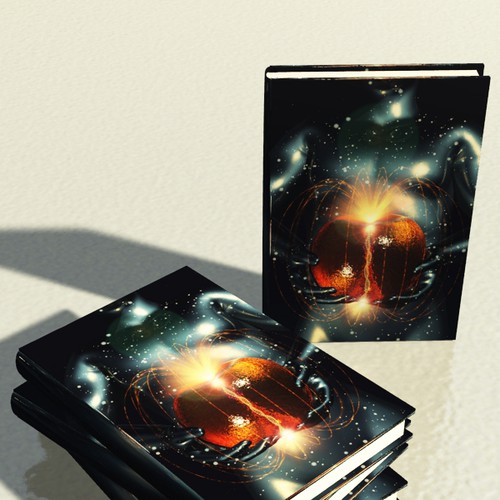 I design my own covers, but this one is beyond my abilities.  I want the size of the image to fit on a 6x9 book  cover at 300 DPI, prefer a color illustration. The full dimensions are 13.649 x 9.219, which includes the front and back cover.  Although the picture will be primarily on the front, I like some continuity of the theme on the back cover. I'll leave that up to you, but please  keep the spine in mind when designing, so I'll have room to put in the title. If made in Photoshop,  I would also like the layers separate, so I can make adjustments in Photoshop if needed.  I have the template for the book cover dimensions  if needed.  (from CreateSpace).

Make the image slightly larger than the above dimensions so I can edit in Photoshop. I would prefer to do the text and title on my own as I'm not sure what font I want to use yet.  I just want a nice vector art  fantasy/sci-fi cover design.  I want a warm cover, the characters need to look real.

The book is for the second in a series. It won't be released until next year, but I like visuals when I write. Whomever I hire I'd like to work with again for the next two books in the series.

I have two ideas here as I'm not getting many artists for my initial cover idea.  I'll take either version, whichever one comes out the best. The first version if my new idea and will probably be easier to execute.

Use a Spheral with the interior funnel similar in concept to the cover of my previous book in the series. (link above). The whole Universe is contained within the spheral, so you can put stars, galaxies, etc. The spheral should be surrounded by a gold band, which act like a cocoon.

Imagine the band cracking at the top of the spheral. What would it look like if all the energy of the Universe is expelled form the top funnel and what would be drawn back in at the bottom? I'd like a sparkling, shiny DNA strand shooting out with all the energy as well.  This is very conceptual, so have fun with it!  Take up the whole work space, but keep in mind the spine in the middle.

Show large hands holding it from behind along with a torso. Work it into whatever background you design. A suggestion is using a nebula or some kind of spacy-type fill pattern for the body, arms and hands.

I would like the design to encompass most of the front cover, so it can even stand out as the thumbnail version at Amazon. Bear in mind I have to put the title text in somewhere.  I'll be using the same font as the linked cover above if you want to imagine it as a visual.

In the foreground are five  people who are highly advanced humans. They'll be standing next to each other in poses that fit the character descriptions below. If you need clarification, please don't hesitate to contact me.

The order of their position from left to right is:

Older gray-haired man (60ish),  looks more like a villager, simple in appearance,  longer hair,  sage type character, wears hand-woven clothing or something you'd expect someone to wear if they make their own clothing.

Young female lead, 20, attractive, caucasian, long auburn hair that falls past her elbows, light skin tone, wears a black or dark color jumpsuit. In her arms is a two year old female toddler that should look of Asian Indian descent, her clothing should also appear hand made. The female lead should look like she's the type of gal who's comfortable holding a gun.

Male lead, attractive, caucasian, in his mid-twenties with shoulder length wavy brown hair, light skin tone. He's dressed in a similar style to the female lead, only he's more casual. Make it look like he's been out on his own for a while, a little more worn from living outside of civilization.  He's a scientist by trade.

An African American female, (16) huntress with a longbow. Wears clothing made of animal skin.

There is one more person who should be standing away from the other characters in some way. He dies at the beginning of the book but is integral to the story, which is why I want him on the cover. He's a gray-haired man (60ish), Sean Connery-type, wearing a black rancher hat. Outdoorsy, wearing a black suit similar to the female lead.

In the far background, I'd like a modern dome city. This is where the two leads hail from. It's in a meadow. Please be aware, we're still on Earth here, so it should look that way.

A space ship (multi-passenger) cruiser zipping by in the sky would be nice, but not necessary. Note, whatever design is used here will also be used for the next book.

I don't want a very bright background, maybe use sunset lighting with some clouds and haze. Please don't blur or make too obscure or otherworldly. We're still on Earth here.

The props used for the next two books will be the dome and space ship, so keep that in mind for continuity. Any questions, please feel free to ask.

<p style="margin: 0.0px 0.0px 0.0px 0.0px; font: 12.0px Helvetica">I'm working on a cast trailer, and I thought it might open your imaginations to the characters. Please see the description brief for more cla

Jetzt starten
Baseball + Racism = My Book Cover
299 $US
I write nonfiction books and deliver lectures about events that occurred in America during the 20th century. My targe...
132
entries
20
designer graphistes
Epic Fantasy Novel Cover
$ 299
I am an independent author that tries to write epic fantasy novels!...
56
entries
8
Designer
Adventurous Bolivian Travel Story
CHF 299
Writer for people who love learning about cultures and places....
105
entries
30
diseñadores
Design book cover for "The War-Bringer" by an Indie Author .
499 US$
I'm an independent author looking for a design for a book cover....
74
entries
11
diseñadores
Design a book cover for a contemporary lovestory in San Francisco
CHF 399
I'm writing romance novels as a selfpublishing author. My stories are published as amazon e-books, softcover and hard...
175
entries
35
diseñadores
"The Critic," a literary thriller needs a killer book cover!
US$299
Hello Designers! I am looking for a book cover. It falls under the literary genre, but with a thriller element. M...
73
entries
22
diseñadores
Erfahren Sie mehr über buch oder zeitschriften cover Design
So funktioniert's