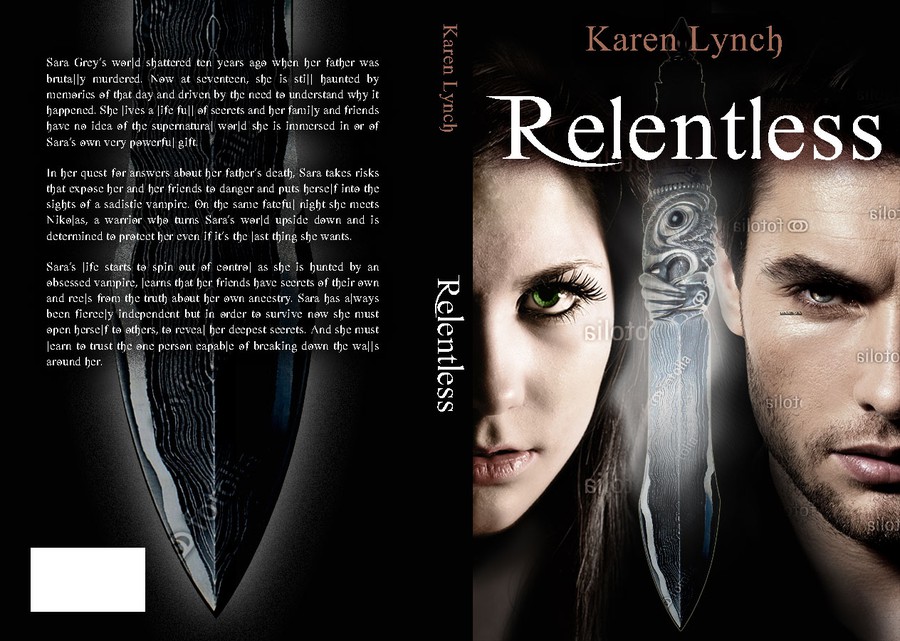 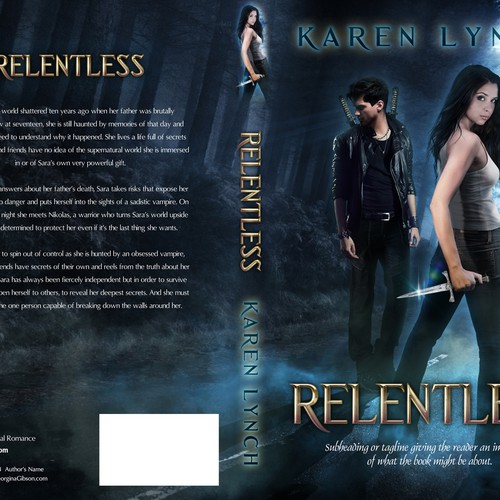 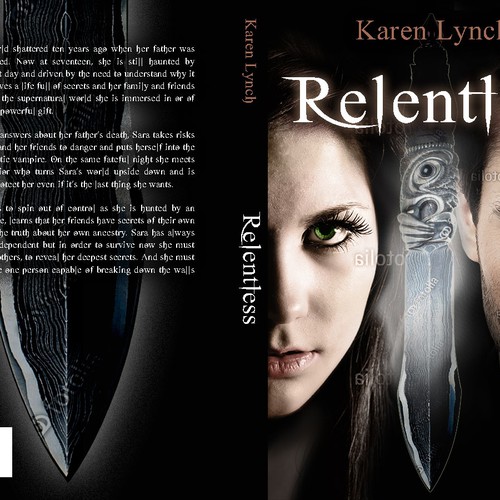 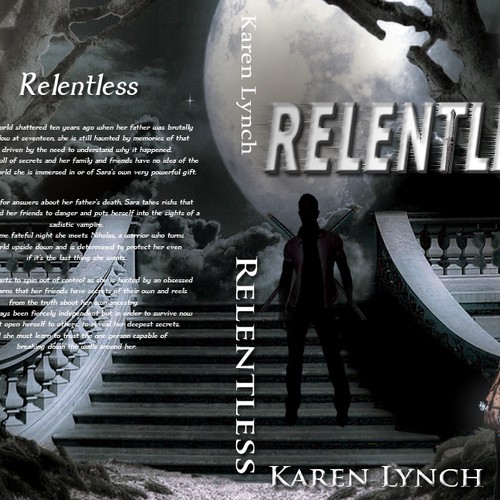 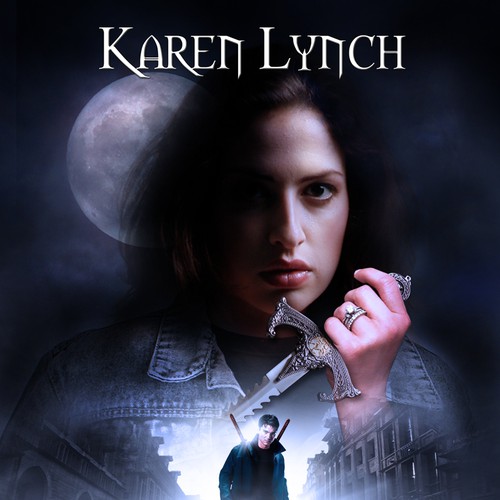 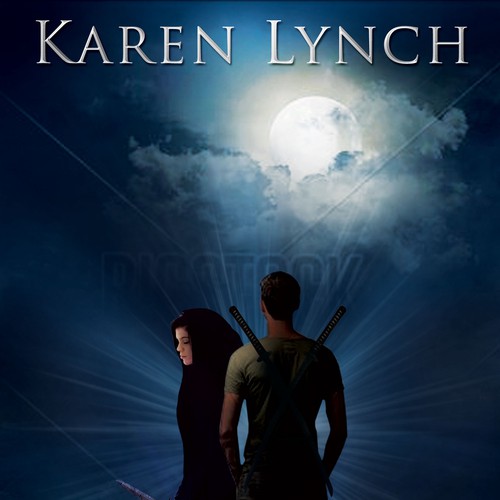 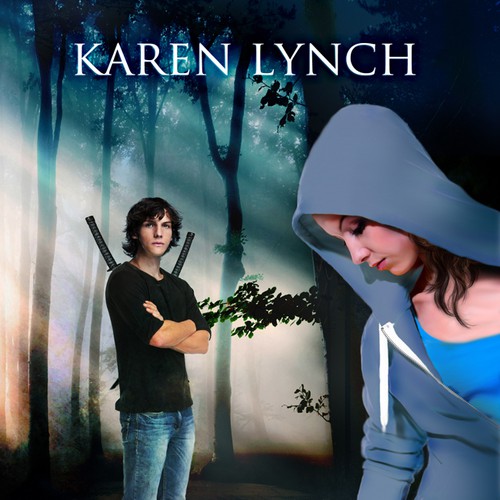 Relentless is a Young Adult Paranormal targeting readers sixteen years old and above.

I am looking for a cover for my ebook as well as my print book. This is the first in a trilogy so who ever does this cover will most likely be asked to do the other two.

Book Summary
Ten years ago, Sara Grey’s father was brutally murdered. Sara found him and she always knew that something not human killed him. Now at seventeen, she is still haunted by memories of that day and driven by the need to understand why it happened. She lives with her uncle and she has only a few close friends because she distances herself from people. She has many secrets and she is deeply immersed in the supernatural world that her uncle and friends do now know exists. One of her biggest secrets is her own powerful gift that allows her to heal animals and other inhuman creatures. Sara doesn’t know where her power comes from and she struggles with a darkness inside her that she believes is the product of her healing gift.

Sara knows that the world is full of real monsters and she has known for a long time that it was a vampire that killed her father. She thinks that her knowledge of the real world makes her safer than other humans. Looking for answers about her father’s death, she takes risks that expose her and her friends to danger and puts herself into the sights of a brutal vampire.

At the same time, she is discovered by Nikolas, a warrior from a legendary race of vampire hunters called the Mohiri who immediately recognizes Sara as one of his kind. Nikolas saves Sara from the vampire and tells her what she is but she does not want anything to do with the Mohiri. Nikolas knows Sara is not safe now that the vampires are looking for her and he makes it his mission to protect her if even she doesn’t want him around.

Sara finds her world once again turned upside down as she is hunted by an obsessed vampire, learns that her friends have secrets of their own while trying to cope with the truth about her ancestry. Things get even more complicated when one of her recent escapades attracts a new enemy who might be even more ruthless than the vampire. Sara has always been independent and guarded, relying on her own strength. But in order to survive she’ll have to open herself to others and reveal her deepest secrets and learn to trust Nikolas, the one person capable of breaking down the walls around her.

Amazon description (should appear on back cover)
Sara Grey’s world shattered ten years ago when her father was brutally murdered. Now at seventeen, she is still haunted by memories of that day and driven by the need to understand why it happened. She lives a life full of secrets and her family and friends have no idea of the supernatural world she is immersed in or of Sara’s own very powerful gift.

In her quest for answers about her father’s death, Sara takes risks that expose her and her friends to danger and puts herself into the sights of a sadistic vampire. On the same fateful night she meets Nikolas, a warrior who turns Sara’s world upside down and is determined to protect her even if it’s the last thing she wants.

Sara’s life starts to spin out of control as she is hunted by an obsessed vampire, learns that her friends have secrets of their own and reels from the truth about her own ancestry. Sara has always been fiercely independent but in order to survive now she must open herself to others, to reveal her deepest secrets. And she must learn to trust the one person capable of breaking down the walls around her.

Sara is seventeen years old with wavy dark chestnut hair that falls below her shoulders and green eyes. She is five foot four with lightly tanned from being outside a lot and she is lithe and healthy. She is pretty but not too girlie and she likes to wear jeans and hoodies. She is strong and courageous but there is also a vulnerability about her that others glimpse when she lets her guard down. She trusts Nikolas with her safety but she is fiercely independent so she finds his protectiveness overbearing. She is also afraid of the feelings he awakens in her.

Nikolas looks twenty though he is immortal. He is six feet tall and muscled but not bulky. His hair is black and wavy and he is very good looking. He often wears jeans and dark t-shirt or thin sweaters. He is a warrior whose life revolves around hunting and killing vampires. He is lethal and fearless and not used to being challenged. He feels intensely protective of Sara and he believes he knows what is best for her. It drives him nuts that she fights him and continuously lands herself in danger.

I have a vision of Sara standing slightly back on to the camera with her face turned to the side so you can see her profile. She is aware of the person standing behind her and her eyes are downcast. She is wearing jeans and a hoodie or short coat. Her right hand is down by her side and it is holding a silver knife. The knife is significant because it is a warrior’s weapon given to Sara by Nikolas. She did not want the knife initially but she ends up using it to save her life several times. Nikolas stands several feet behind Sara with two thin katana-like swords on his back.

It is night but they are illuminated by the full moon or by street lights depending on the location. The location can be a street or near the woods or ocean as long as it is outdoors. I am open to ideas on this. The story takes place in a fictional town in Maine and Sara lives near the waterfront. Give the whole thing a supernatural feel with a touch of romance. Nothing too sinister or creepy. This has to appeal to readers of young adult and new adult fiction and the majority of them are female like me. Make me want to look inside this book.

This process is all new to me so please let me know if I forgot to include anything or if you have questions.

Help "Presidential Shift" Book 4 of the Corps Justice Series with a new book or magazine cover
US$ 299
The Corps Justice Novels tell the story of former U.S. Marine SSgt Cal Stokes and his company Stoke Security…
52
entries
6
designers
Help Rocket Tears Publishing LLC with a new book or magazine cover
299 $US
Independent Publisher of Edgy Young Adult Science Fiction
146
entries
30
designer graphistes
Help Erin Mayes with a new book or magazine cover
299 US$
I'm a novelist
135
entries
43
designers
Design an irresistible, powerful, book cover for a political thriller set in Paris
US$ 499
Self Publishing THE PARIS PLOT, a novel (www.theparisplot.com) through Oakhurst Print, my company. Publisher of ficti...
147
entries
34
designers
Design a scifi novel cover with elements of Arthurian legend
799 USD
The novel (and subsequent trilogy) is science fiction set in the modern day with elements of the thriller genre and myth
142
entries
31
designer
Create a bold fantasy YA cover for the second book in a series
£ 209
I publish my fantasy series for YA readers, and mentor other fiction authors to their success....
75
entries
13
designers