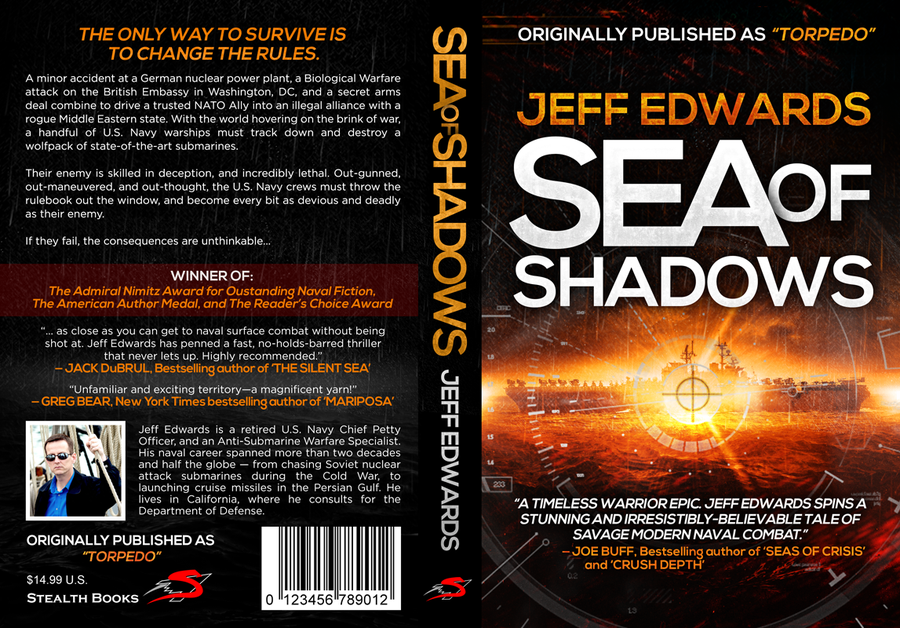 Create an eye-catching cover for an award-winning naval warfare novel. 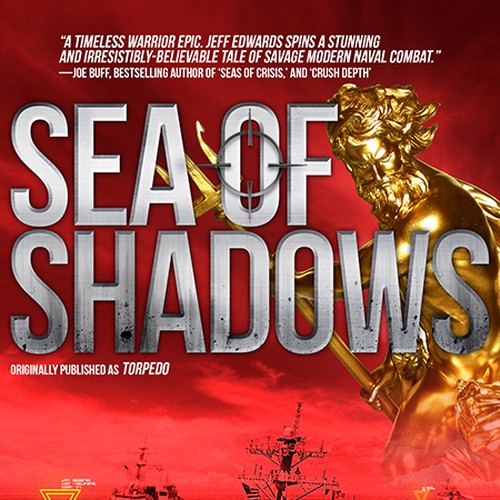 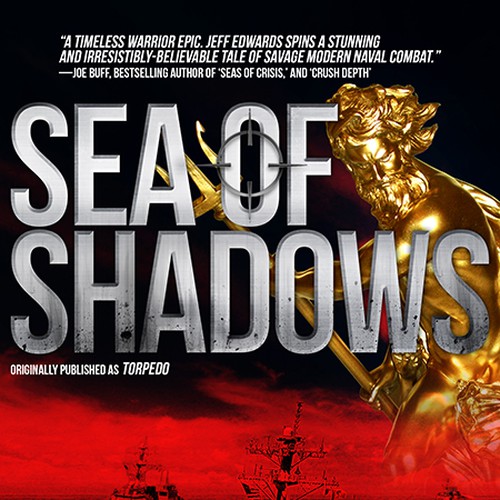 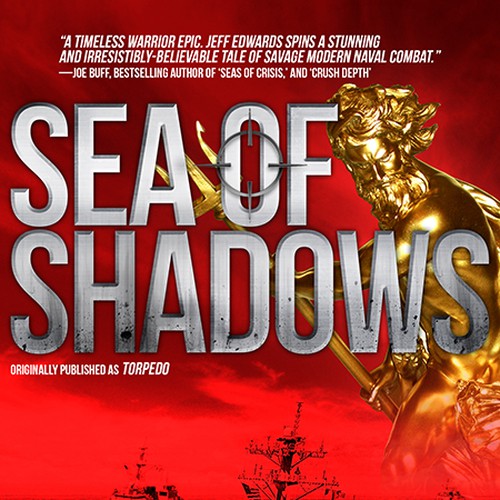 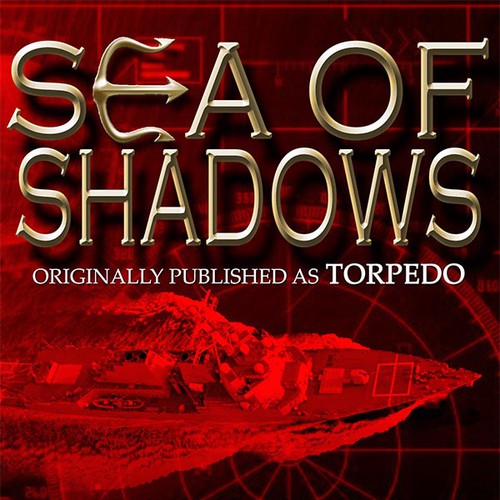 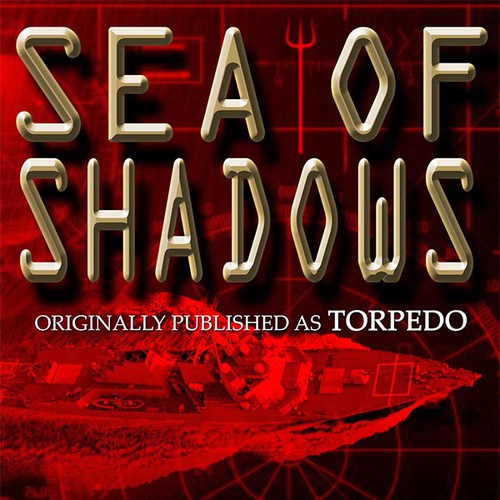 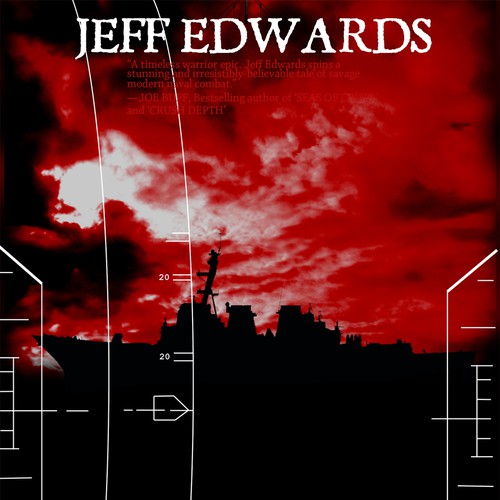 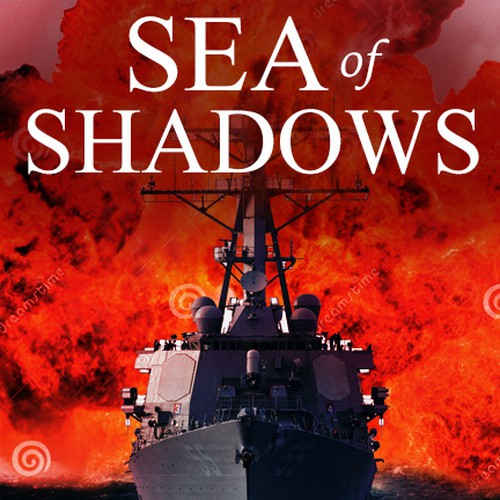 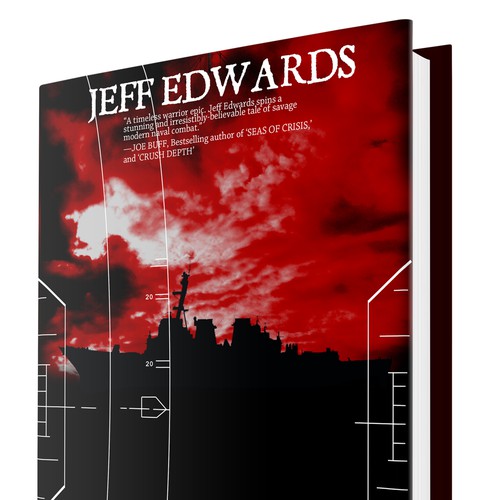 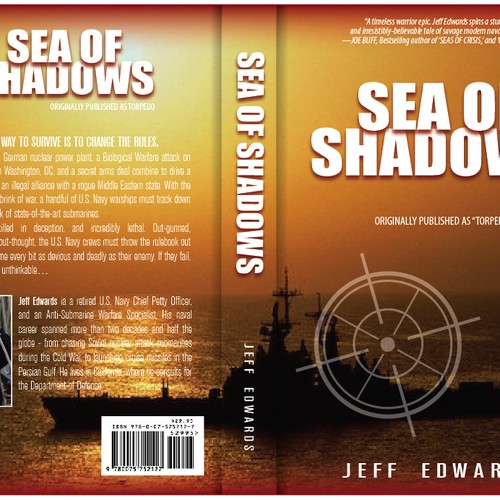 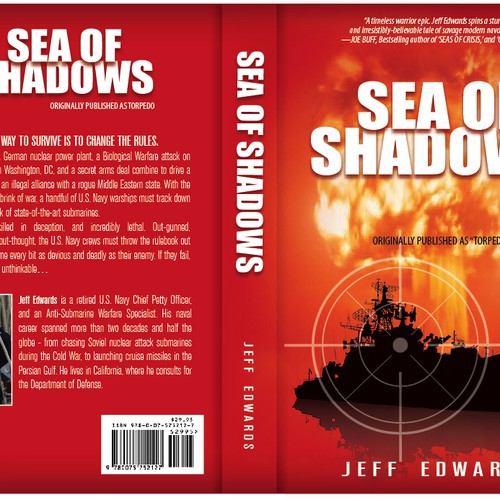 We write and publish military technothrillers with a strong focus on the United States Navy. Our target readers are fans of Tom Clancy, Larry Bond, Joe Buff, and other top authors in the military technothriller genre. While you’re welcome to examine the book covers of these authors for inspiration, I’m hoping for a different enough look to make this book stand out.

I need a book cover for a high tech naval warfare novel titled ‘Sea of Shadows.’ The story centers around an Arleigh Burke class guided missile destroyer, and the crew who takes the ship into combat. The book is set four or five years in the future, so the look should be cutting-edge without crossing over into the realm of science fiction. The following text from the back cover should give you some idea of the plot…

THE ONLY WAY TO SURVIVE IS TO CHANGE THE RULES.
A minor accident at a German nuclear power plant, a Biological Warfare attack on the British Embassy in Washington, DC, and a secret arms deal combine to drive a trusted NATO Ally into an illegal alliance with a rogue Middle Eastern state. With the world hovering on the brink of war, a handful of U.S. Navy warships must track down and destroy a wolfpack of state-of-the-art submarines.
Their enemy is skilled in deception, and incredibly lethal. Out-gunned, out-maneuvered, and out-thought, the U.S. Navy crews must throw the rulebook out the window, and become every bit as devious and deadly as their enemy. If they fail, the consequences are unthinkable…

I’m providing a PDF of the current cover design as a starting point. I’m looking for someone to either take the existing design to the next level, or knock my socks off with a new approach. Many of my book sales are through Amazon, so I want something that will leap off the screen as a web thumbnail, as well as looking great on the full size printed book.
The cover should prominently feature a U.S. Navy Arleigh Burke class destroyer at sea. You can find useable ship images in the U.S. Navy’s photo gallery at http://www.navy.mil/viewGallery.asp. The images on this site have been released for public use, but if you incorporate one or more into the cover design, please give me the registration number so that I can formally obtain the Navy’s permission for commercial purposes. (My intended use already falls within their public use guidelines, but I prefer to get confirmation in writing.)
Because we want to imply action/combat, I like the idea of superimposing high tech crosshairs or other cool looking targeting markers over the ship, but I’ll be quite happy if you find an alternate method of getting the idea across. As you’ll see, our current branding leans heavily toward reds, blacks, and golds. I’d like to keep those colors if possible.

The front cover should include the following blurb:
“A timeless warrior epic. Jeff Edwards spins a stunning and irresistibly-believable tale of savage modern naval combat.” —JOE BUFF, Bestselling author of ‘SEAS OF CRISIS,’ and ‘CRUSH DEPTH’

Both the front and rear covers must include the following disclaimer: “Originally published as TORPEDO”

The text on the back cover should be set as a separate layer, so that I can edit the wording as marketing strategies for the book change over time.
There are currently three books in this series, with a fourth in the early stages of development. When I find the right design ethic, the creator will be invited to design several additional covers, as well as an alternate format for the audiobook edition of each book.

I can provide high-resolution copies of the author photo for the back cover, or any other existing design element from the original cover if you want to incorporate them.
The hull number on the ship image should not be visible. (If it’s visible in the source image, please remove it and fill in by sampling the adjoining hull areas.)

This is the first book in a series of four.  Three of the books are currently in print,
with a fourth on the way, and possible follow-ons in the future.  I’ve uploaded a jpg of the existing covers for
the first three books.  As you’ll see, a red
color pallet was used for all, and the goal is to do something like that with
the new designs.  We’ve also included a
gold statue element in all covers to-date, chosen to match the titles of the
books.  (i.e., Poseidon the sea god for SEA
OF SHADOWS, an angel for THE SEVENTH ANGEL, and Shiva for SWORD OF SHIVA.)  Although the statues are different, all bear a
close enough resemblance to each other to clearly mark all three volumes as
part of the same series.

I’d like to see something like that in the new
cover design for Sea of Shadows—some common visual element that can be
continued from one book to the next.  It’s
extremely likely that I will ask the winning designer to create the rest of the
covers in the future, so it’s important for me to know what the common visual
element will be.  It doesn’t have to be a
statue, but it should be something that will clearly brand/link the books
together.

Create the book covers for HOT, new trilogy that is going global!
$449
My name is Andrea Smith and I have written a contemporary romance trilogy known as 'the Baby Series.' It is…
117
entries
31
diseñadores
Design book cover for women's fiction novel "LIFE IN SPADES"
299 $US
Novel to be released this summer by new, independently published author, Frances Frost
116
entries
23
designer graphistes
Help Erin Mayes with a new book or magazine cover
299 $
I'm a novelist
135
entries
43
Designer
Create the next book or magazine cover for Post Hoc Publishing
299 US$
small publisher of eBooks
37
entries
16
diseñadores
The Red Ribbon Rebellion - a YA epic adventure - needs a new book
US$ 299
This is a young-adult action/adventure serial and the design used for web-promotion and for the actual cover
59
entries
20
designers
Moving book cover required for book about an orphanage in Romania
199 £GB
Ebooks...
442
entries
73
designer graphistes

Jetzt starten
Design a book cover for the weirdest antics the North Pole has ever seen.
499 $
I'm a writer. A satirical fantasy fiction writer. I try to be funny, and according to me, it works....
14
entries
8
Designer
Create a bold fantasy YA cover for the second book in a series
209 £GB
I publish my fantasy series for YA readers, and mentor other fiction authors to their success....
75
entries
13
designer graphistes
Looking for a real Show Stopper for my Burlesque ebook series
USD 350
Erotic Romance ebooks...
119
entries
24
diseñadores
Design a how-to book cover for emerging independent musicians
799 $US
Music Business Toolbox is a forthcoming book for independent musicians and emerging record labels. The book includes ...
196
entries
52
designer graphistes
Design front and back cover for post apocalyptic young adult novel (series)
799 $
Post apocalyptic young adult thriller...
58
entries
18
Designer
In the Twisted Web
USD 694
I am an author of commercial fiction, most notably romantic thrillers with a strong female lead....
168
entries
50
designer
Erfahren Sie mehr über buch oder zeitschriften cover Design
So funktioniert's