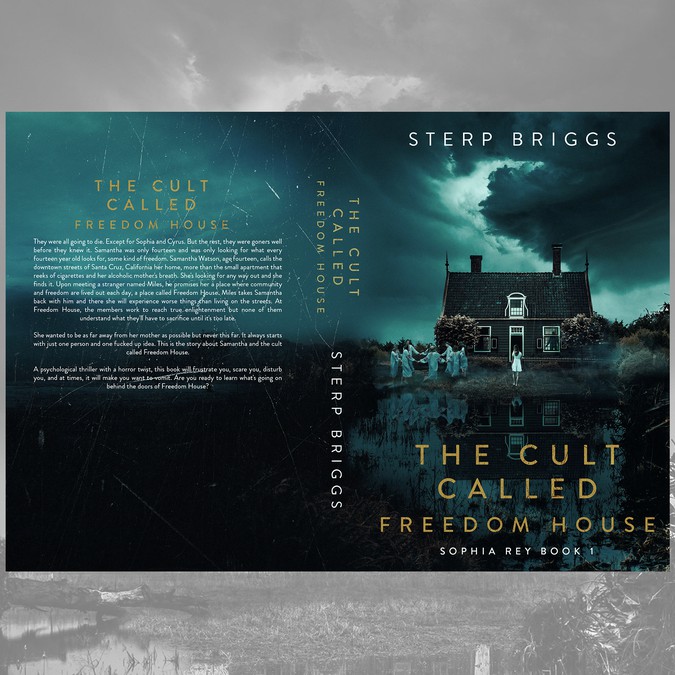 Create a dark horror book cover, one that represents the disturbing cult that lives in Freedom House 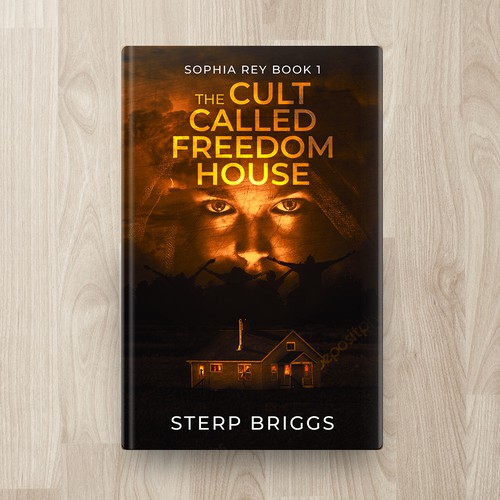 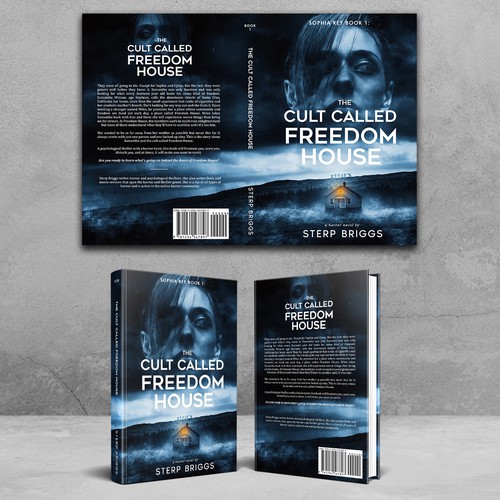 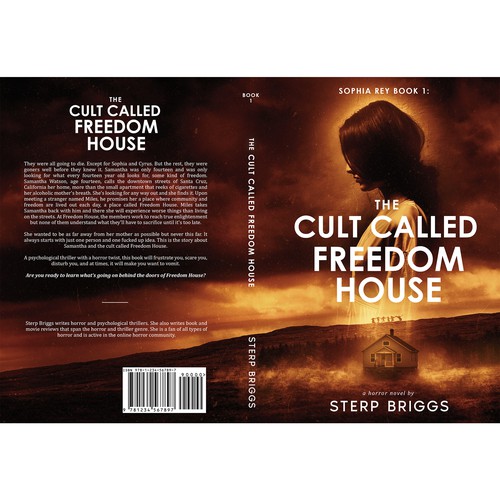 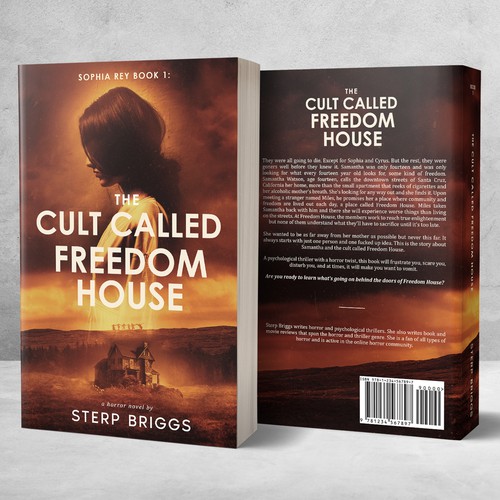 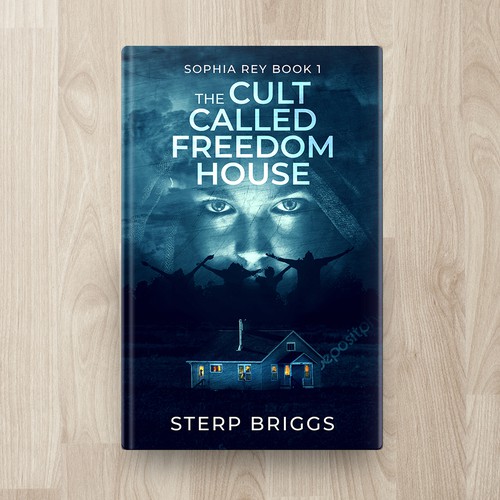 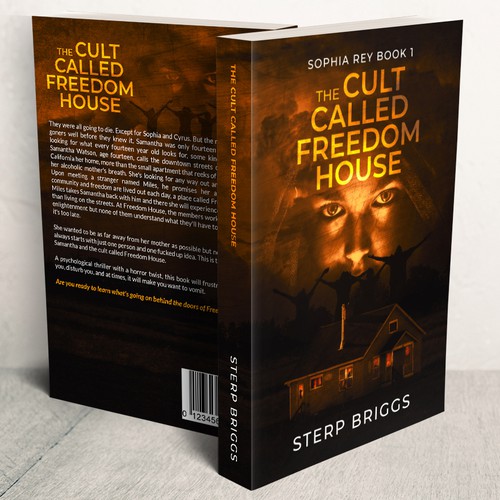 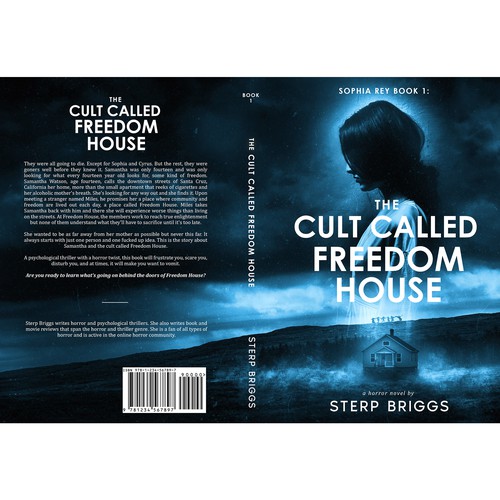 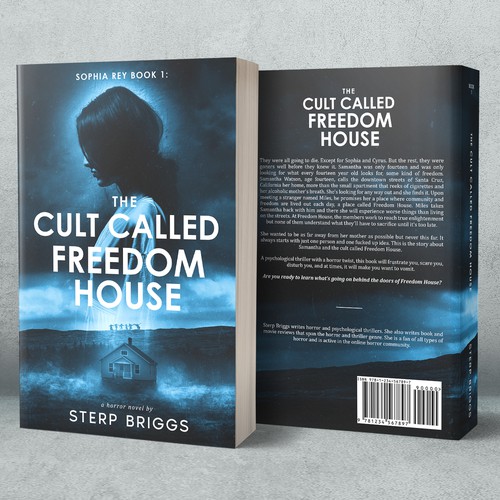 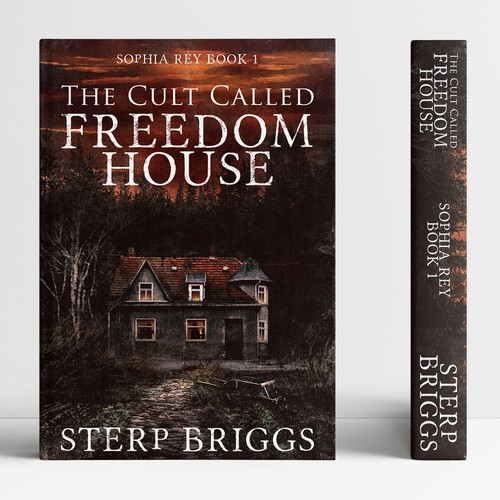 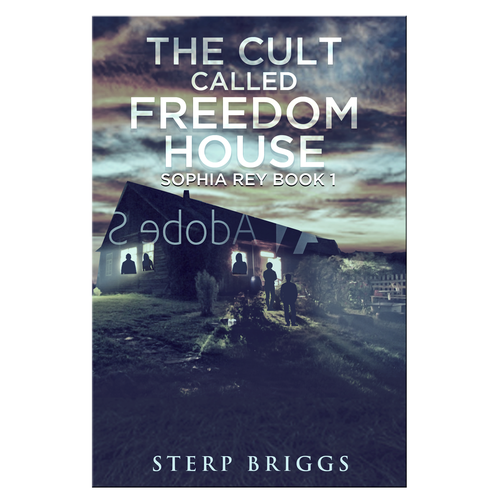 Sterp Briggs writes horror and psychological thrillers. She also writes book and movie reviews that span the horror and thriller genre. She is a fan of all types of horror and is active in the online horror community.

They were all going to die. Except for Sophia and Cyrus. But the rest, they were goners well before they knew it. Samantha was only fourteen and was only looking for what every fourteen year old looks for, some kind of freedom. Samantha Watson, age fourteen, calls the downtown streets of Santa Cruz, California her home, more than the small apartment that reeks of cigarettes and her alcoholic mother's breath. She's looking for any way out and she finds it. Upon meeting a stranger named Miles, he promises her a place where community and freedom are lived out each day, a place called Freedom House. Miles takes Samantha back with him and there she will experience worse things than living on the streets. At Freedom House, the members work to reach true enlightenment but none of them understand what they'll have to sacrifice until it's too late.

She wanted to be as far away from her mother as possible but never this far. It always starts with just one person and one fucked up idea. This is the story about Samantha and the cult called Freedom House.

A psychological thriller with a horror twist, this book will frustrate you, scare you, disturb you, and at times, it will make you want to vomit. Are you ready to learn what's going on behind the doors of Freedom House?

Like this one the best out of all examples here because of sunset, my story has single story house with small vegetable garden and pigs, peacocks, and chickens in the back, redwoods surround the house in my story, but like this photo there is an open wide space meadow before the woods begin

I am looking for a cover that is dark in colors, reds, blacks, and greys. I am looking for some type of one story house with a small vegetable garden in front. I imagine silhouettes of adults and some teens male and female standing inside and facing out the windows. This is about a cult and the book ends horribly bad.

Avoid bright colors (except for possibly a sunset etc) avoid overly cartoonish illustrations, I am looking for a bit more realism.

Book cover for a hilarious book about cats
399 US$
People in their late 20s and 30s; people who love cats and cat memes; people who love crime novels; people who love hist
60
entries
22
diseñadores
YA Romance cover
199 $US
Teen to adult
104
entries
27
designer graphistes
Modern art nouveau-style fantasy cover for printed book. Ebook cover project to follow.
319 £
Primarily for adults, but younger readers would enjoy it too. A general audience that likes epic fantasy with psychologi
8
entries
2
Designer
Need a book cover that draws in young adults to the world of pirates and mermaids.
399 $
Children and young adults. People who are interested in island life, pirates, mermaids and strong female characters.
60
entries
21
Designer
paper back and ebook cover
£ 319
Someone is reading this book to understand how to get the best loan offer by boosting his three-digit credit score. He m
43
entries
8
Designer
Create a Cover for a Spiritual Book by a Best-Selling Author
300 $US
Our target audience consists mainly of women (70%), aged 40+, interested in new age spirituality.
84
entries
19
designer graphistes

Jetzt starten
Book cover for the true story of a Get Money and Do Good family
499 US$
35-65 adults- male/female- interested in capitalism/business, family- traditional and non, and leaving a legacy. Likely
98
entries
19
designers
Book cover for non-fiction
199 $US
162
entries
14
designer graphistes
The Garden of Shadows and Bones
$10,099
My books are geared towards New Adult. They are mainly about dark fantasy with witches and magic.
62
entries
24
diseñadores
Veteran needing patriotic design for new book
$299
A book for political enthusiasts, history buffs and anyone interested in a serious look into American politics that won'
58
entries
13
デザイナー数
Finance BOOK COVER needed. Prefer clean, light simplicity and a drawn illustration.
US$ 499
Self-employed professionals, typically men ages 30-50 who make over 75k per year single or 100k joint, maybe they work f
35
entries
12
designers
Captivating cover for the book "The Way Home"
299 US$
People in general interested in life stories. People that struggle with addiction.
121
entries
49
diseñadores
Erfahren Sie mehr über buch oder zeitschriften cover Design
So funktioniert's