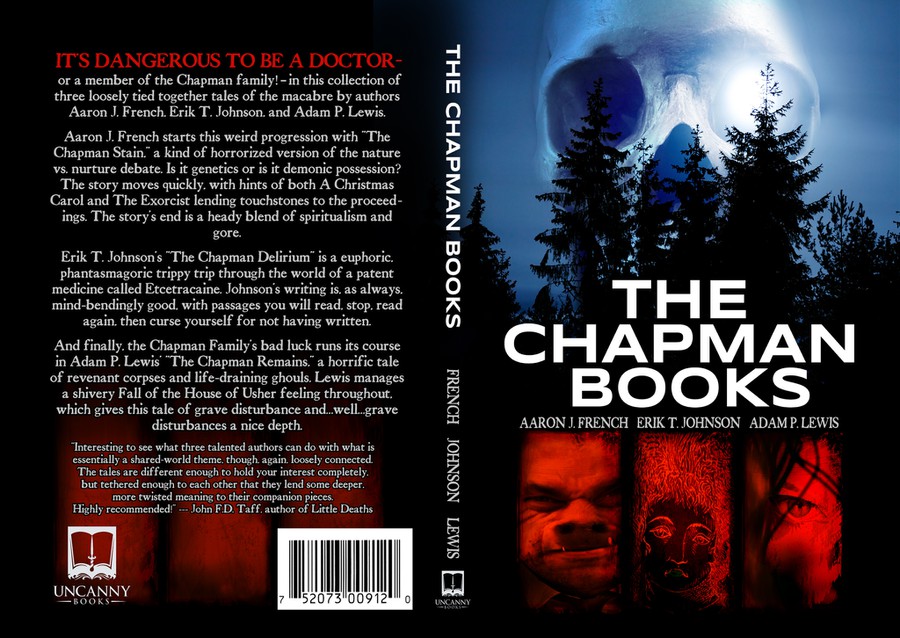 Create a book cover for a horror novel! 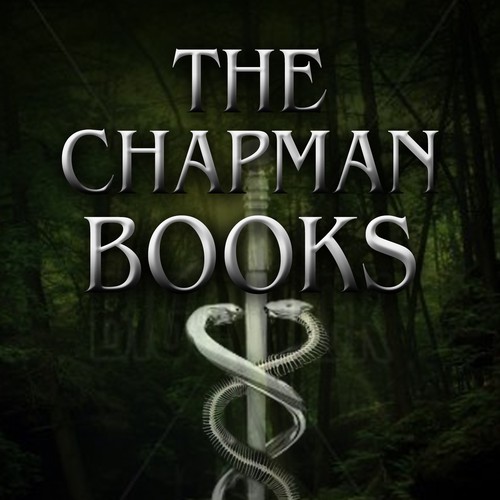 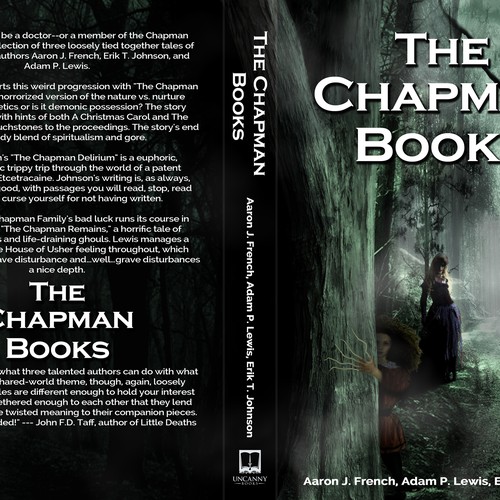 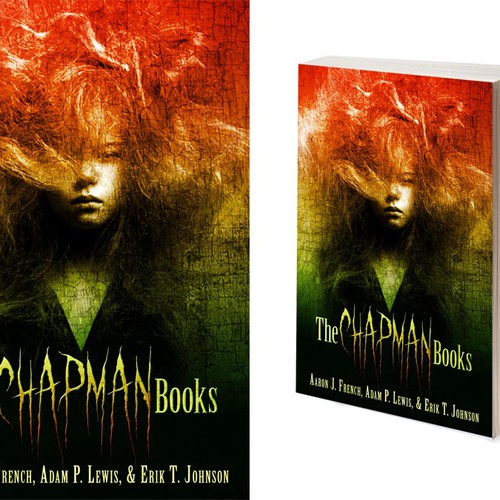 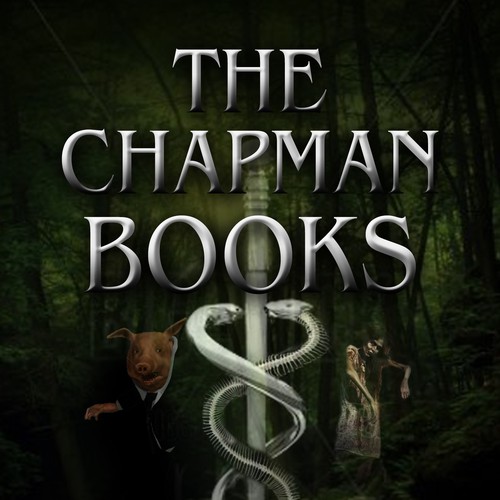 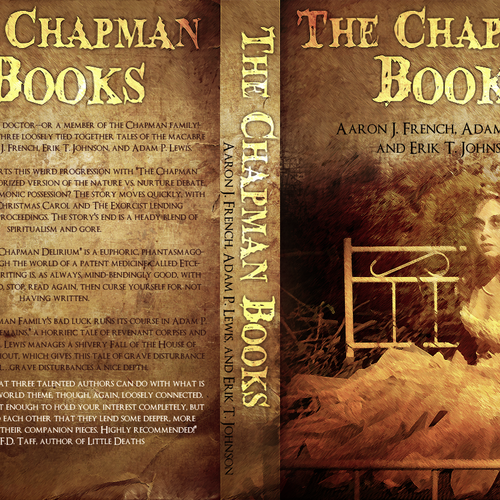 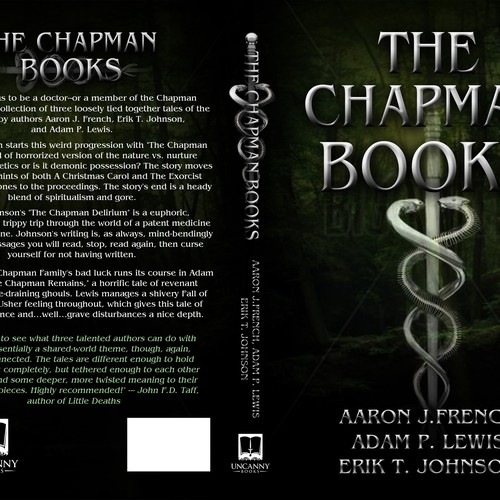 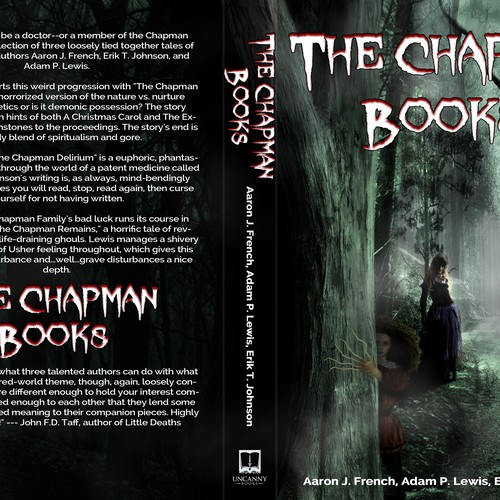 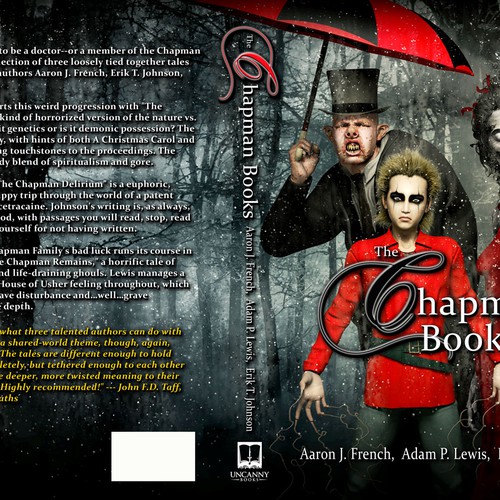 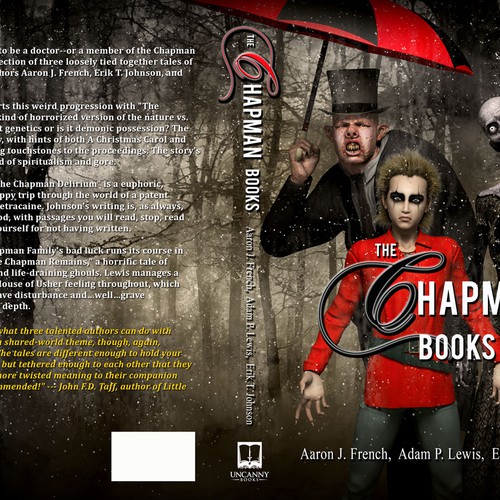 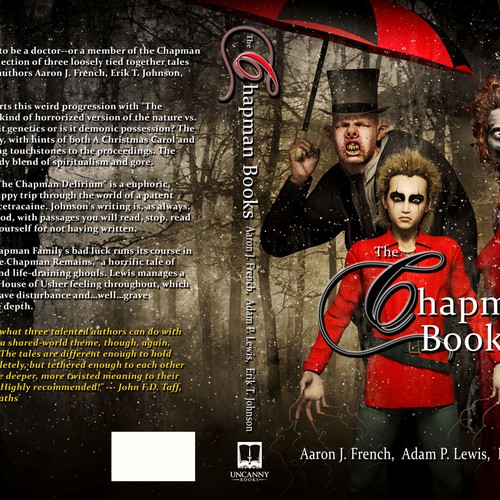 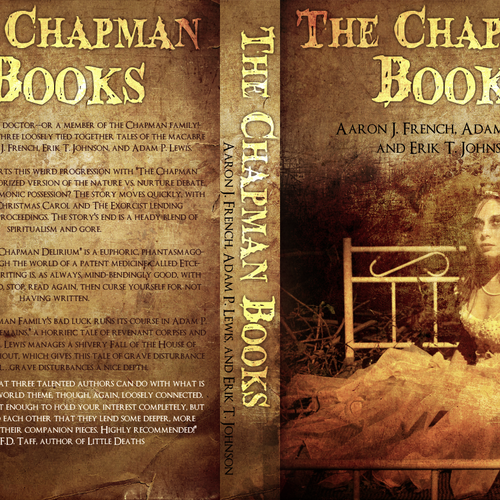 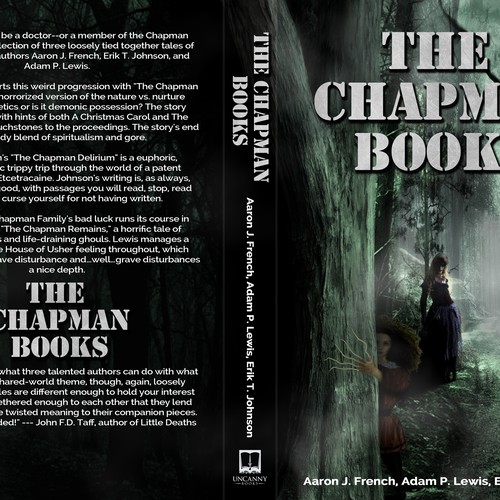 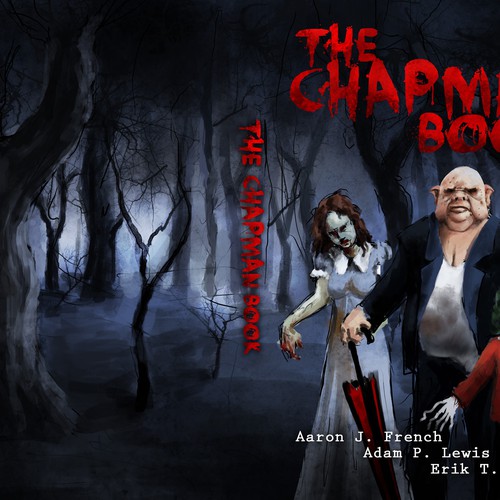 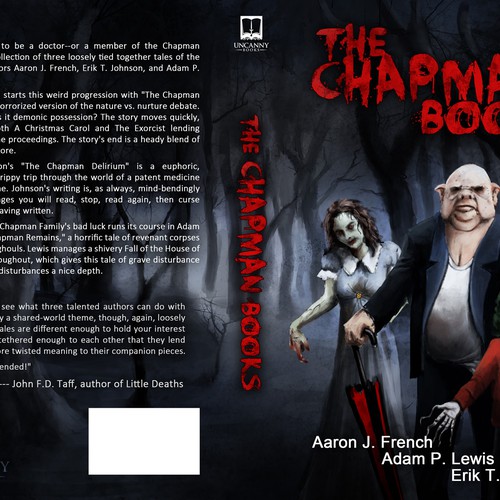 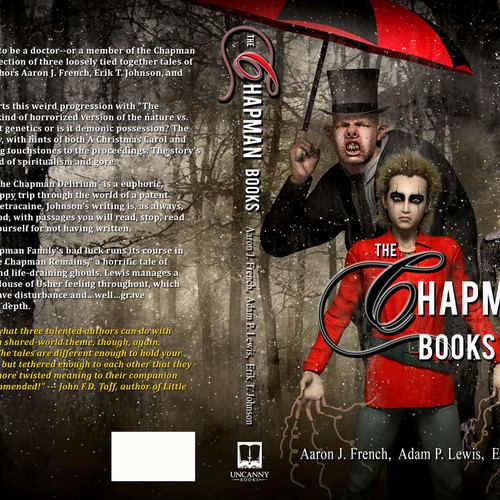 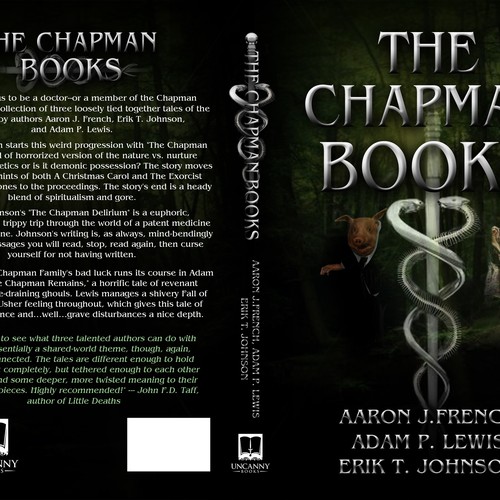 We are a small publishing company working to publish a new collection that will contain three horror-themed short novels.

We would like a front and back cover for the book. The book title is "The Chapman Books" and the authors are Aaron J. French, Adam P. Lewis, and Erik T. Johnson. We are open to different ideas for the cover design, but we have some suggestions for elements we would like to see included.

One idea -- though not the only one possible -- would be to have a spooky wooded scene, with a road winding through it. There are three iconic figures we would like to see make it onto the front or back cover if at all possible.

(1) A "pigman" (humanoid pig, should appear menacing). He is described as "A lumpy thing with a hunched back and long dangling arms. Dressed in a black suit, carrying a black and red umbrella, and wearing a battered chimneypot hat....The wanderer’s face was also uncannily piggish, with round, smooth, fatty features and snout-like jowls. Sharp teeth jutted up and down from rubbery lips. Eyes, set to either side of a wide flat nose, looked black and glossy, with flies crawling over them." The pigman could also be depicted holding up a sign that reads (in red) "You Are Going To Die"

(2) The mid-nineteenth century German character Struwwelpeter (feel free to Google that name for some iconic images). Here is how one of our authors has described him: "...a boy about Perceval’s age. He bore a numb, death-sentenced expression, blending immediate shock with the resignation of one long acquainted with their fate. Unaware of the long tear that clung like a strand of wet seaweed to his cheek, his reckless hair like the dry yellow weeds that memorialize unloved graves, prophet of meankind... Arms at his sides, empty palms facing outward, his freak-hands fanned ten long middle-fingers. As if wordlessly appealing to a threatening mob: 'Look, I hold no weapons, mean no harm, I’ve stolen nothing. There’s no need to hate me. All I’ve got are silly green stockings, a blousy red shirt, these disgraceful nails that twistingly dangle. These nails, they’ve gone too far for me to fix on my own, like long roots grown up into me.'”

(3) A grotesque, zombified young woman in an old-fashioned calico dress or something similar.

A caduceus (the intertwined snakes with the familiar medical symbol) could also be used as a design element on the front or back cover, or even as part of the title. If so, one or both snakes could be skeletal, showing bones rather than skin.

Here is the text that should appear on the back cover:

It's dangerous to be a doctor--or a member of the Chapman family!--in this collection of three loosely tied together tales of the macabre by authors Aaron J. French, Erik T. Johnson, and Adam P. Lewis.

Aaron J. French starts this weird progression with "The Chapman Stain," a kind of horrorized version of the nature vs. nurture debate. Is it genetics or is it demonic possession? The story moves quickly, with hints of both A Christmas Carol and The Exorcist lending touchstones to the proceedings. The story's end is a heady blend of spiritualism and gore.

Erik T. Johnson's "The Chapman Delirium" is a euphoric, phantasmagoric trippy trip through the world of a patent medicine called Etcetracaine. Johnson's writing is, as always, mind-bendingly good, with passages you will read, stop, read again, then curse yourself for not having written.

And finally, the Chapman Family's bad luck runs its course in Adam P. Lewis' "The Chapman Remains," a horrific tale of revenant corpses and life-draining ghouls. Lewis manages a shivery Fall of the House of Usher feeling throughout, which gives this tale of grave disturbance and…well…grave disturbances a nice depth.

"Interesting to see what three talented authors can do with what is essentially a shared-world theme, though, again, loosely connected. The tales are different enough to hold your interest completely, but tethered enough to each other that they lend some deeper, more twisted meaning to their companion pieces. Highly recommended!" --- John F.D. Taff, author of Little Deaths

Please note: we may not be able to fit all of the design elements I've noted above on the covers.  We may have to go with a more abstract design that uses one or more of these design elements as a starting point.  That's fine -- we welcome your design ideas.  Good luck and thanks for your time and effort!

Jetzt starten
Epic Fantasy Novel Cover
$299
I am an independent author that tries to write epic fantasy novels!...
56
entries
8
デザイナー数
Design a book cover for a novel of suspense.
US$ 299
Author...
95
entries
16
designers
Design a book cover for a contemporary lovestory in San Francisco
CHF 399
I'm writing romance novels as a selfpublishing author. My stories are published as amazon e-books, softcover and hard...
175
entries
35
デザイナー数
Design book #1 in the highly-anticipated ParentNormal humor book series
US$299
My name is Chris Cate. I’m a parent of three kids, and my parenting humor has been featured on the Huffington Post, B...
71
entries
9
diseñadores
Urban fantasy author needs exciting book cover design.
US$ 299
Urban fantasy author who writes about vampires, witches, werewolves and other supernatural beings for entertainment....
55
entries
8
diseñadores
Take us to new heights by designing a book cover first of 3 titles
US$ 499
Provide digital promotion to individuals and organizations seeking to share cooperation via the masters of messages....
169
entries
18
designers
Erfahren Sie mehr über buch oder zeitschriften cover Design
So funktioniert's