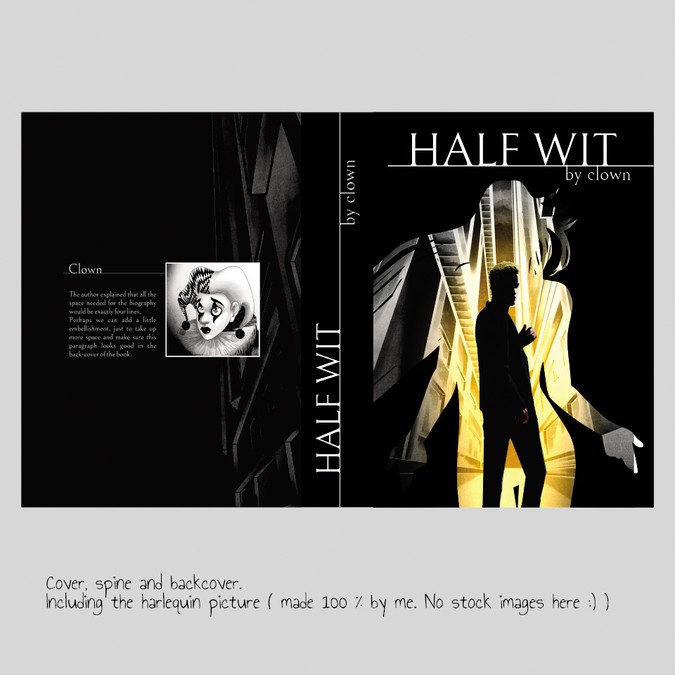 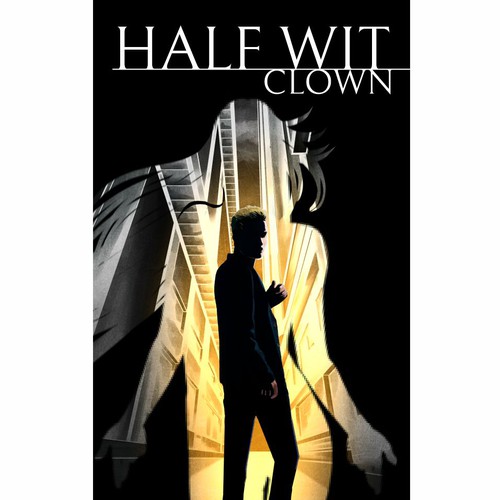 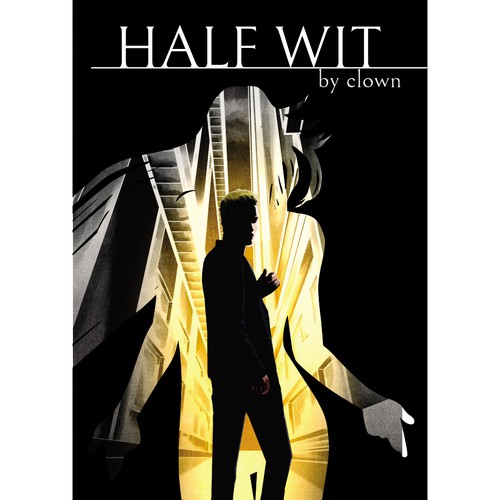 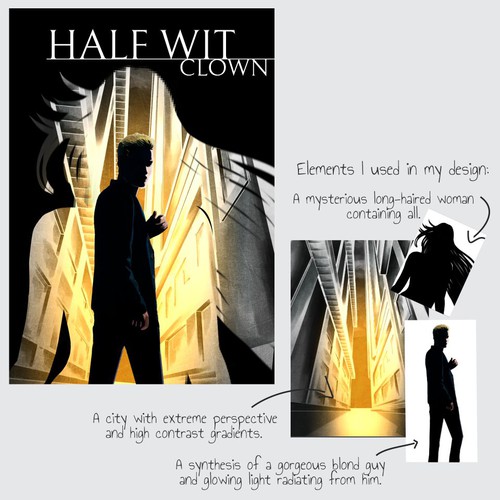 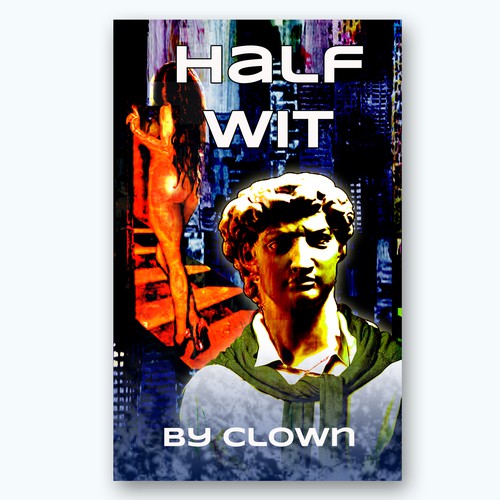 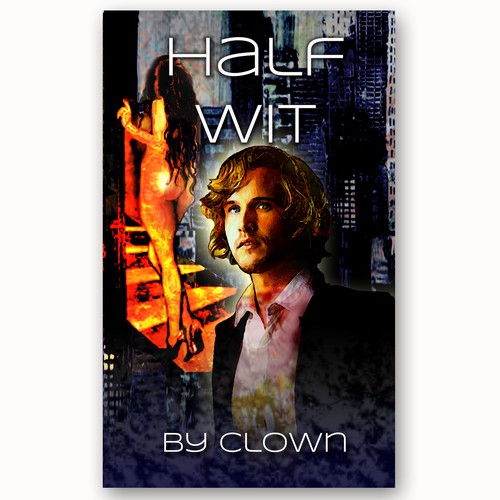 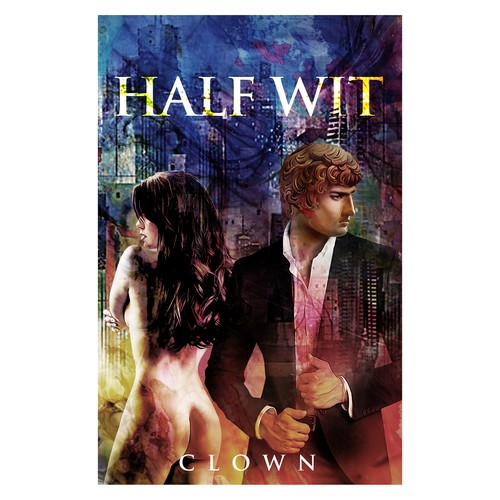 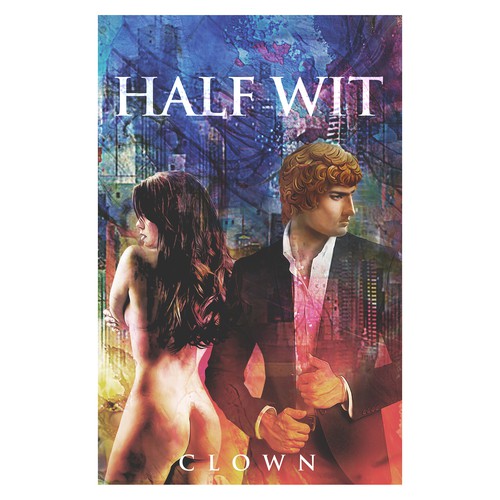 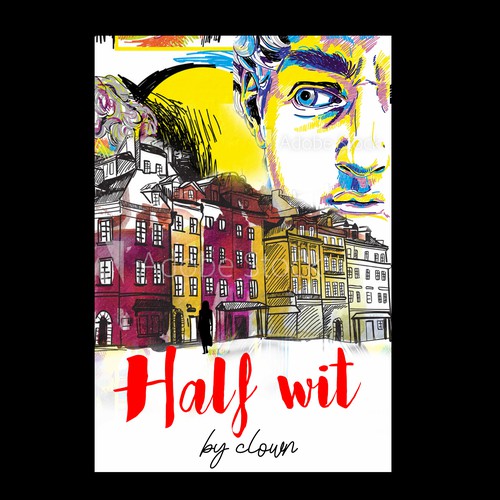 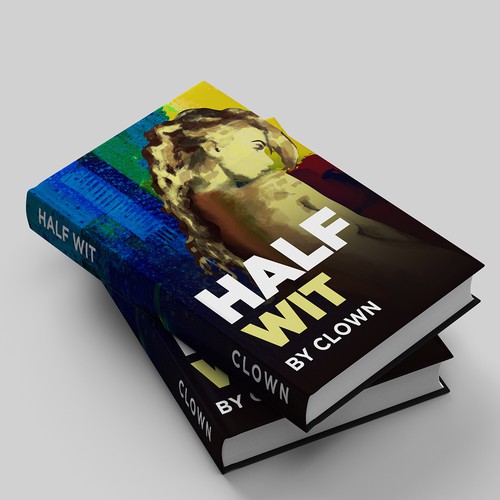 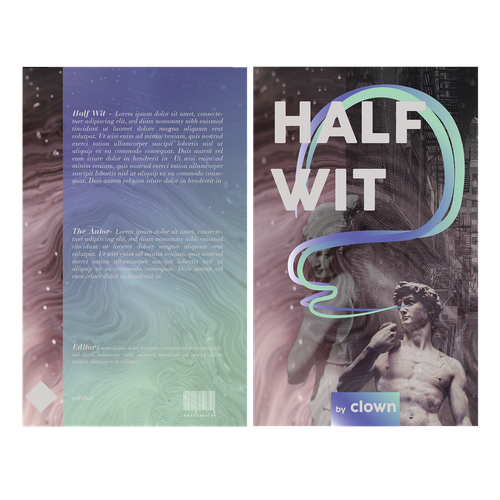 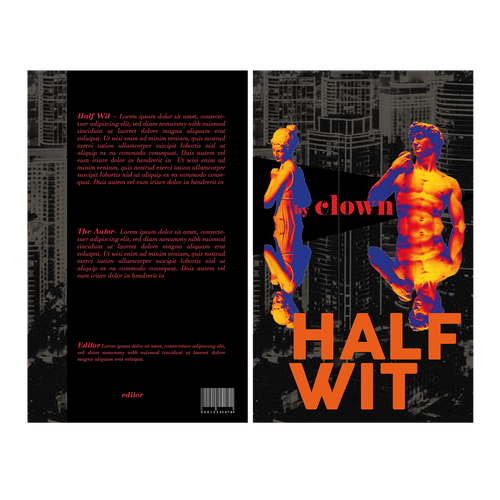 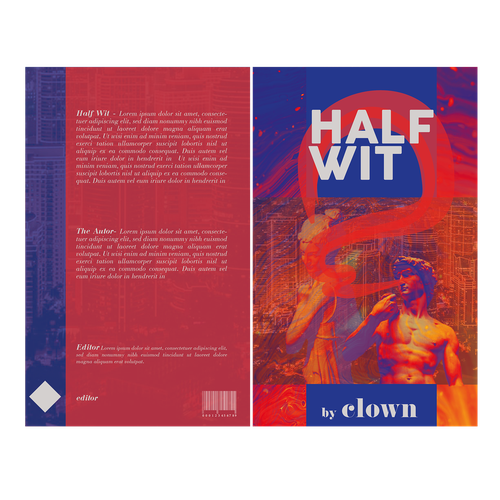 I am experimenting with the nom de plume, so you'll have to bear with me and by into this. The author blurb should be accompanied by a picture of a melancholy, anime-style harlequin. If you consider that a separate project from the rest of the cover design, let me know.

When a man with a charmed life meets a woman with otherworldly allure.

Readers of adult literary fiction who enjoy elements of supernatural and surrealism.

I like the representation of the city, but should be darker
I like the blue, but not enough detail.
I like this pose, but this is too abstract.
I like this level of realism, but not the pose.
I love this style for the man, but the pose is wrong. He should be calmer, looking away.
I am literally thinking of Michelangelo's David when I describe the character in the book, bu a modern version. Curly blonde hair and green eyes, passive facial expression like the statue. Fully clothed on the cover, looking away from the female character. I added more images for inspiration on this.
Many Roman statues give an idea of what the man should look like in real life.

The story has three main elements: 1) An oppressive urban setting that the protagonist finds constricting and disorienting; 2) the protagonist, the half wit, a beautiful, naive man with an angelic like innocence, a blonde, green-eyed Adonis; and 3) his love interest and pseudo-antagonist, a mysterious older woman; a dark Persephone.

I would like the design to be either expressionist or surreal to capture the mood of the story--oppressive city contrasted with man who is beauty and light, and the voluptuous woman. She has long jet black hair that reaches out to ensnare him, helps to hide her nude body. Her face should either be turned away from the viewer or in profile that is mostly obscured by her hair.

I am literally thinking of Michelangelo's David when I describe the character in the book, bu a modern version. Curly blonde hair and green eyes, passive facial expression like the statue. Fully clothed on the cover, looking away from the female character. You could even manipulate a photo of the statue--put clothes on, get the right pose and style to the illustration so that it looks like a real person. I added more images for inspiration on this.

These colors and visual elements are important parts of the story.

Nothing cute with the fonts. Please have the title and author on the front and spine clear and readable, color that stands out clearly from the over art.

Jetzt starten
Western Landscape for cover of trippy novel.
$ 549
Students, teachers, activists, hippies, armchair sociologists, veterans, stoners, coastal elites, outdoor types, dropout
57
entries
13
Designer
Book cover
239 GBP
Young mums / parents / to be discussed after coffee mornings
8
entries
4
diseñadores
The Death of Neo-Darwinism
US$199
This is a hot topic and would be of interest to anyone in the academic community regardless of the discipline.
26
entries
11
diseñadores
Minnesota Cabin scene to appeal to women who like love stories
399 $
Female, USA, 18-50
142
entries
27
Designer
The Garden of Shadows and Bones
$10,099
My books are geared towards New Adult. They are mainly about dark fantasy with witches and magic.
62
entries
24
diseñadores
Captivating cover for the book "The Way Home"
299 US$
People in general interested in life stories. People that struggle with addiction.
121
entries
49
diseñadores
Erfahren Sie mehr über buch oder zeitschriften cover Design
So funktioniert's