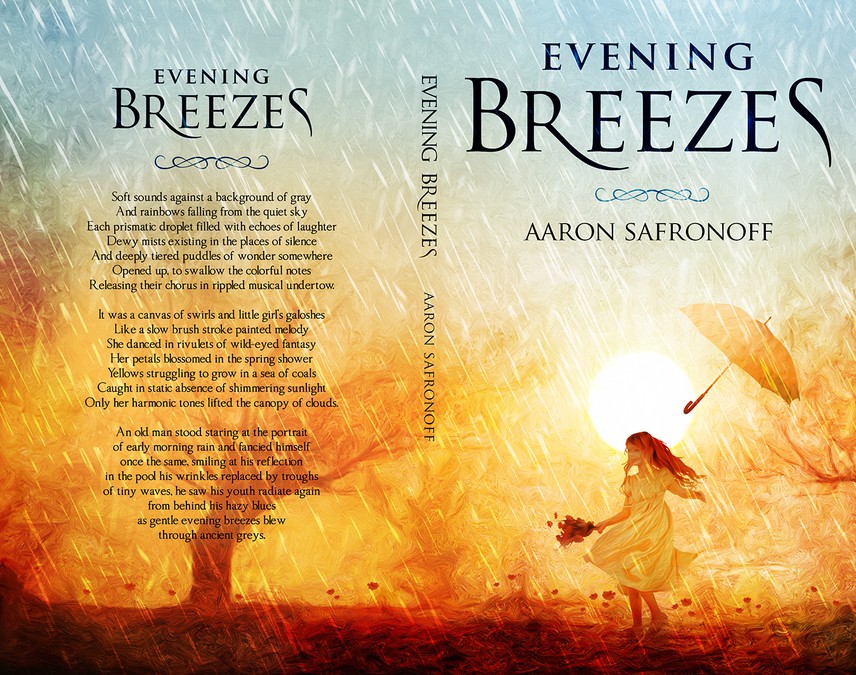 Cover Design for an award-winning novelist! 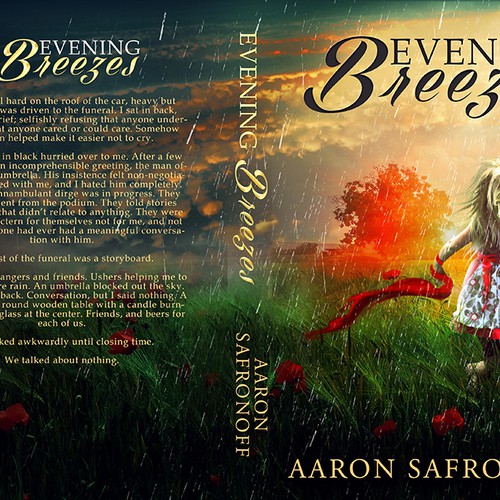 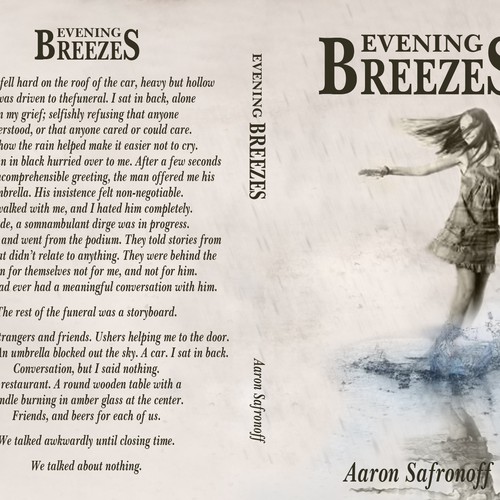 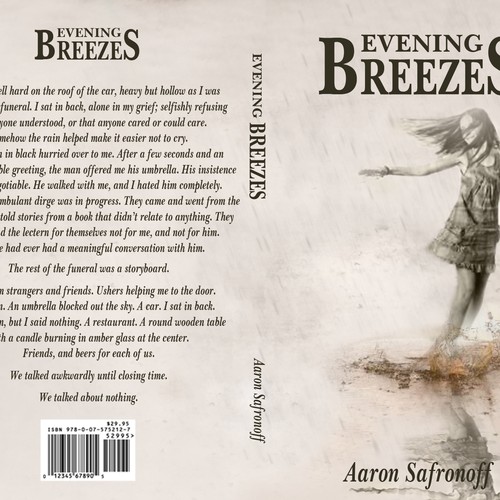 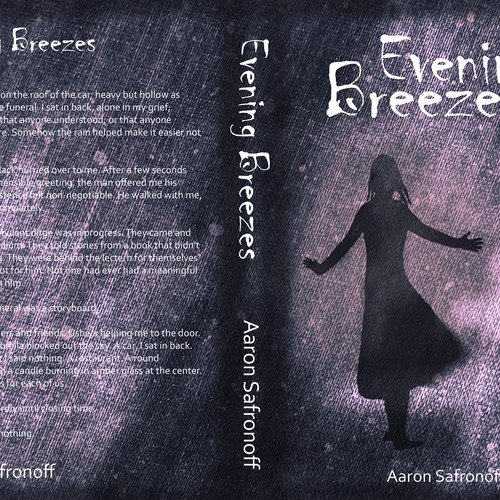 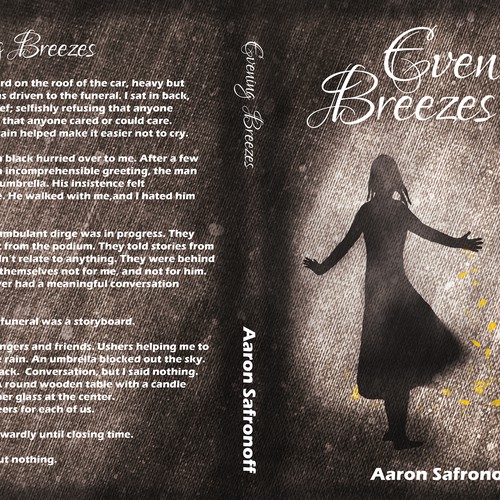 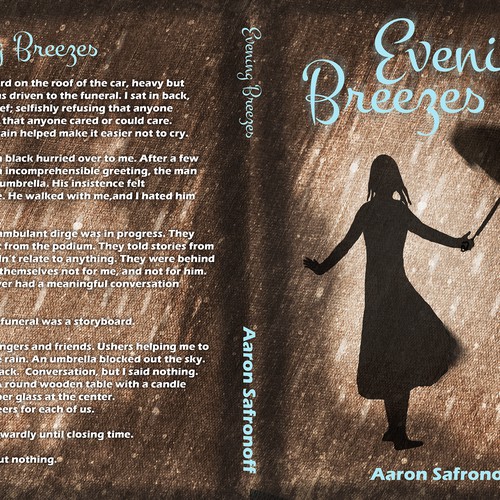 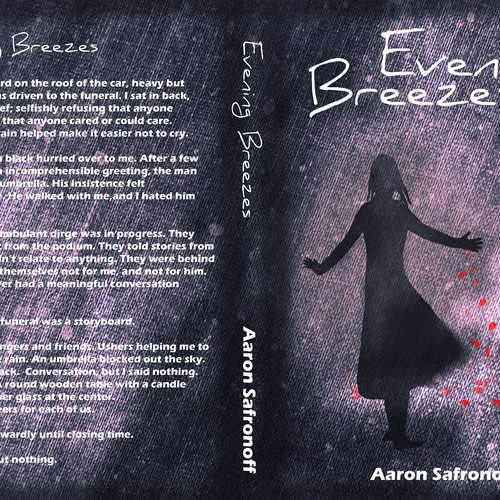 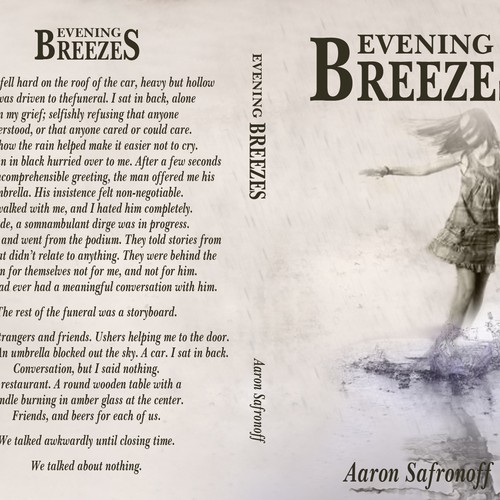 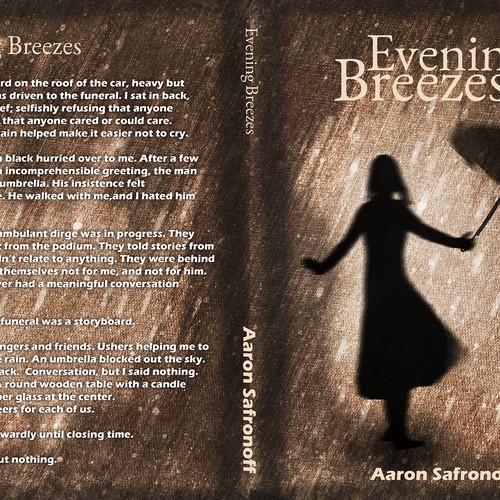 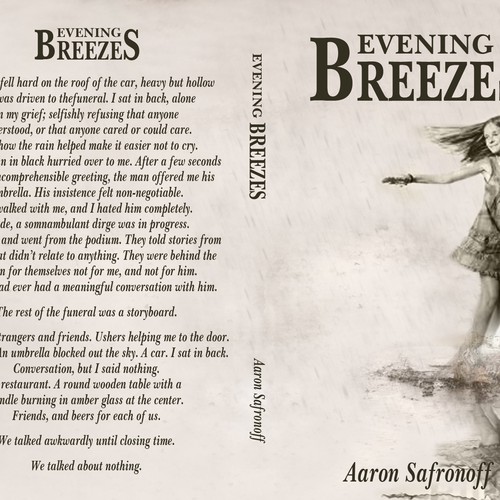 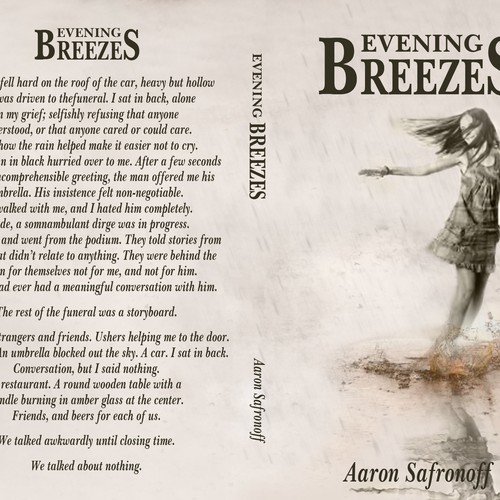 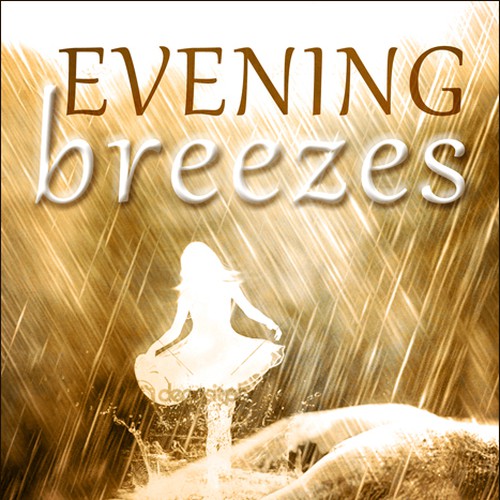 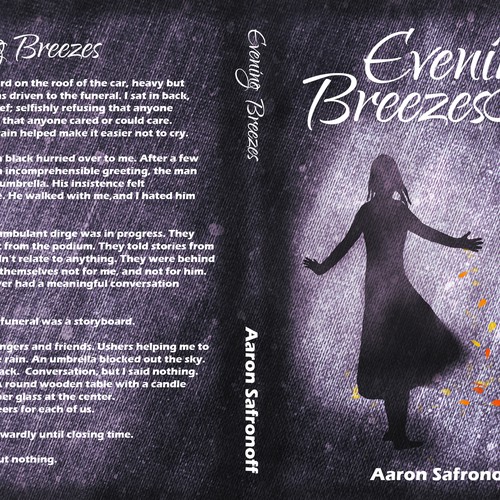 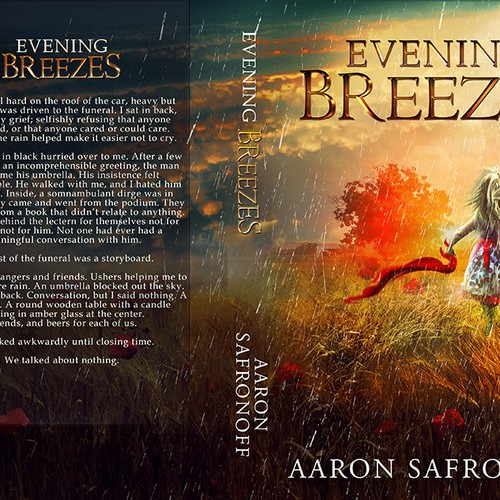 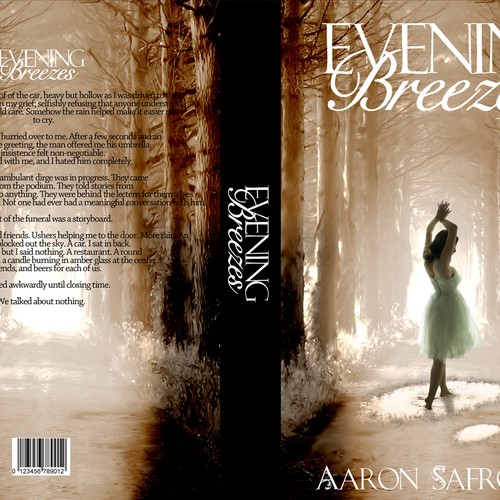 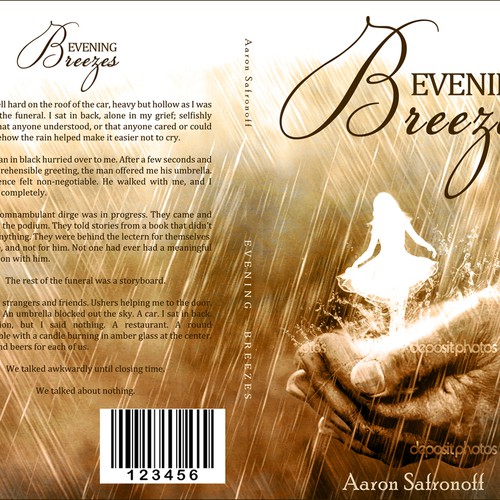 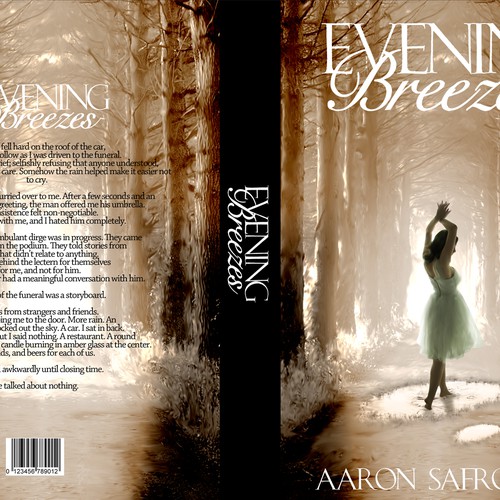 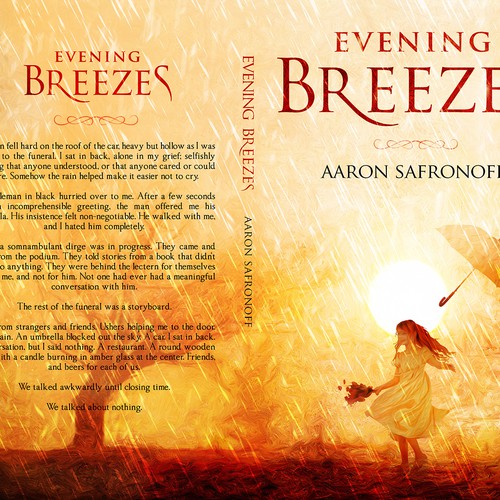 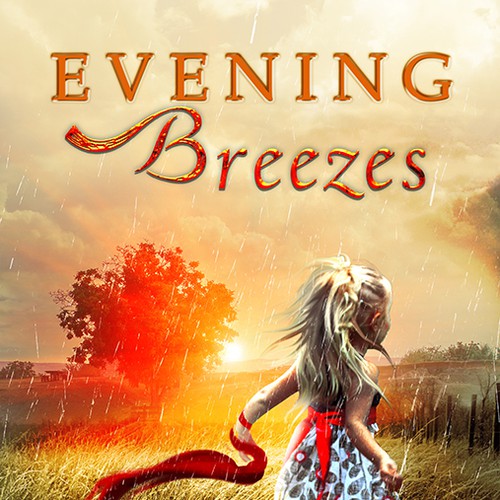 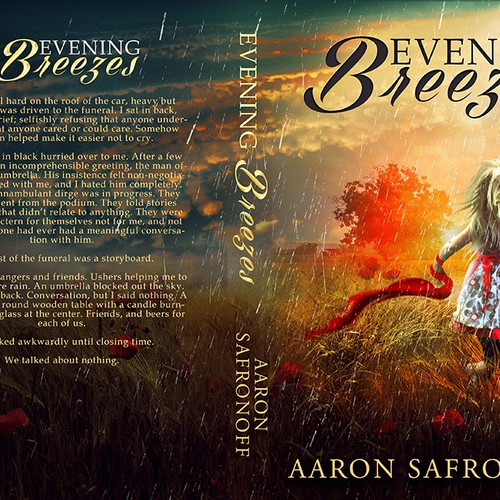 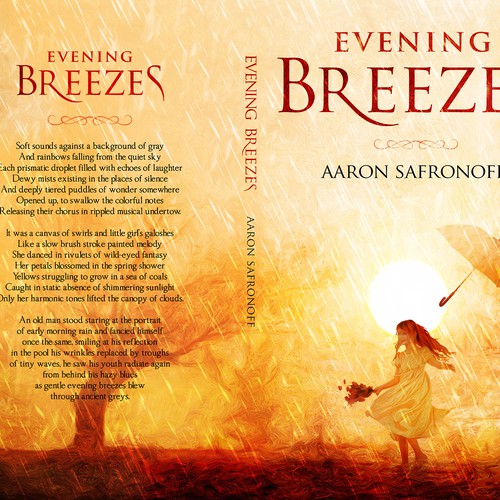 I am an author. My previous works have been science fiction, targeting a broad audience late teens to middle-aged, and contemporary literature targeting college students. Today, I'm working on a graphic novel for youth, 9-12 years old.

I'm working toward re-releasing an existing, published book, Evening Breezes. The novel has only ever existed in e-format, but my plan this year is to do a print run, and I'd like to launch it with a new cover.
I wrote this book over a decade ago, and I've edited it several times since, and the final version is a difficult emotional piece about coming to terms with the death of a friend and innocence.
What do I want? I want to capture all of that! :-) Seriously, there is a poem at the heart of the book that should probably be the inspiration for the cover and it describes a young woman playing in the rain, dancing in puddles, and an old man seeing his own youth reflected in hers--maybe it isn't a feeling you lose, but something you experience in different ways throughout life.
Anyway, I've attached the previous cover, and the poem below to help express what I want. The previous cover is probably too esoteric/abstract to capture an audience, but most importantly, I think it is not captivating as a book cover.
Reflections, loss, youth, friendship... difficult concepts that need an artist to capture in an elegant relationship on a single sheet of paper.

Please do not hesitate to contact me! I'm available... if there is a delay in my response, please forgive it. I will get back to you as soon as I am able.

Attached a completed cover from another work for dimension information. The binding portion, the thickness, will vary depending on the weight of the paper, but Evening Breezes will be roughly 1/3 the size of the attached reference.

CreateSpace template PDF is also included. They've changed their system since I used it last, but using either reference for the size will be acceptable. I should be able to pay for clean up after the fact, if the size of the binding changes for some reason. I don't have a firm date for the new edition yet, so the specifics of the font, margins, and final page number have not been determined.

BACK OF THE BOOK EXCERPT: (Maybe too long?)

The rain fell hard on the roof of the car, heavy but hollow as I was driven to the
funeral. I sat in back, alone in my grief; selfishly refusing that anyone understood,
or that anyone cared or could care. Somehow the rain helped make it easier not
to cry.

A gentleman in black hurried over to me. After a few seconds and an
incomprehensible greeting, the man offered me his umbrella. His insistence felt non-negotiable. He walked with me, and I hated him completely.

Inside, a somnambulant dirge was in progress. They came
and went from the podium. They told stories from
a book that didn’t relate to anything. They were behind the lectern for themselves
not for me, and not for him. Not one had ever had a meaningful conversation with him.

The rest of the funeral was a storyboard.

Hugs from strangers and friends. Ushers helping me to the door. More rain. An
umbrella blocked out the sky. A car. I sat in back.
Conversation, but I said nothing. A restaurant. A round
wooden table with a candle burning in amber glass at the center. Friends, and beers for each of us.

We talked awkwardly until closing time.

We talked about nothing.

I'm very open to interpretation, especially since the themes are somewhat abstract. If you're unsure, I think that the poem attached is a great source of inspiration for the imagery I believe works best.

Also, I'm happy to send a free e-copy of Evening Breezes to all of you who are interested--it's a difficult work, and not really representative of the writing I do today, but it is emotionally charged, and ultimately, what the cover is supposed to represent.

Please do not hesitate to contact me! I'm available... if there is a delay in my response, please forgive it. I will get back to you as soon as I am able!

I'm extremely excited about this project and I look forward to seeing your artwork in print!

Precipice - Book Cover for a Mystery/Suspense novel
US$ 299
160
entries
23
diseñadores
Horror artistry wanted for book cover.
299 $US
It's a book for late teens and adults. It's a dramatic horror book. Similar to THE WALKING DEAD except there is no ...
60
entries
12
designer graphistes
RED PLANET – need your skills and imagination. Create a book cover for a famous Scifi novel
279 €
Publisher of fantasy and horror novels, science-fiction literature as well as game books and role-playing games.......
64
entries
24
designer graphistes
The Centaur Chronicles, written by award-winning author, needs a fabulous, eye-catching cover!
499 $US
I write fantasies and novels for Middle-grade and Young Adult...
66
entries
17
designer graphistes
Epic Fantasy Novel Cover
$299
I am an independent author that tries to write epic fantasy novels!...
56
entries
8
デザイナー数
Create an original, eye-catching book cover for a dark urban-fantasy.
659 $AU
Author with a target audience of YA and up...
77
entries
35
designer graphistes

Jetzt starten
Re-design the cover of an award winning novel
399 $CA
Dekko Publishing primarily sells historical fiction novels....
64
entries
15
designer graphistes
Design a book cover that transcend time and space for a scifi adventure
299 $US
Book publishing, entertainment and media. Development of a book series in science fiction and fantasy along with a sc...
54
entries
14
designer graphistes
My River Sanctuary book cover
AU$ 399
Independent book publisher (individual)...
20
entries
12
designers
Stunning layout for memoir
399 $AU
I have written a book entitled Beyond Superwoman....
277
entries
33
designer graphistes
Design book #1 in the highly-anticipated ParentNormal humor book series
US$299
My name is Chris Cate. I’m a parent of three kids, and my parenting humor has been featured on the Huffington Post, B...
71
entries
9
diseñadores
Eye-Catching Vampire Novel Cover
279 €
The book is a Vampire Novel. The aiminggroup should be mainly females between 25-45....
169
entries
31
designers
Erfahren Sie mehr über buch oder zeitschriften cover Design
So funktioniert's