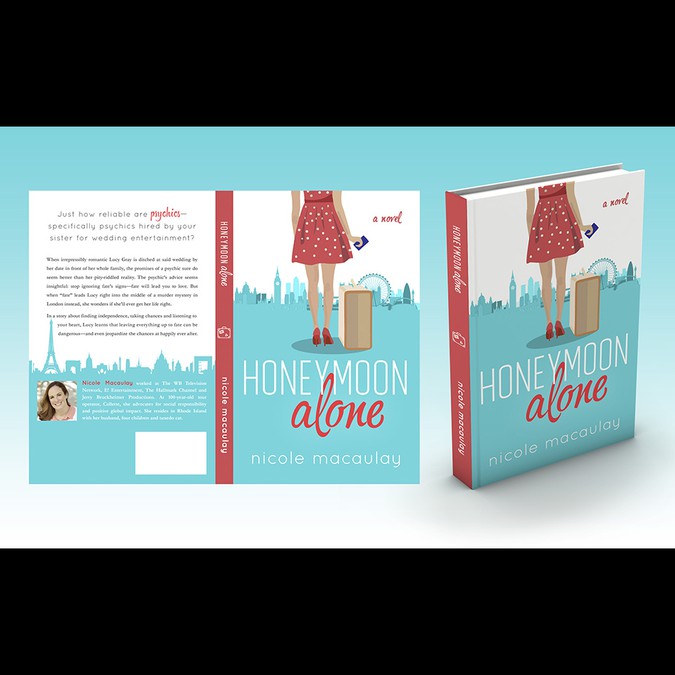 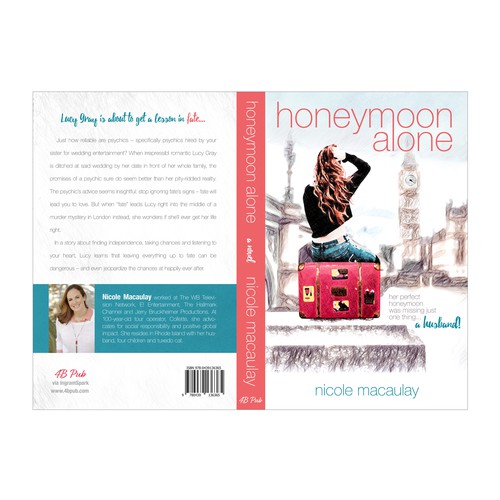 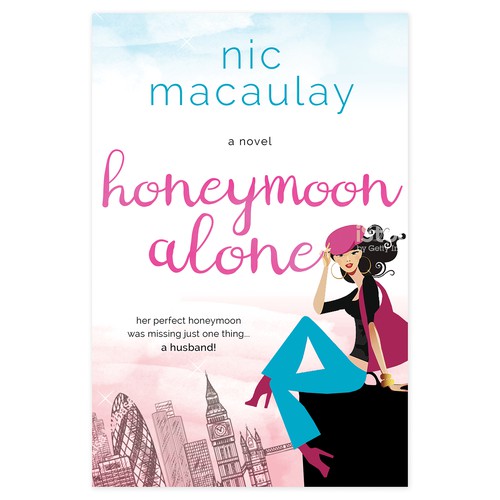 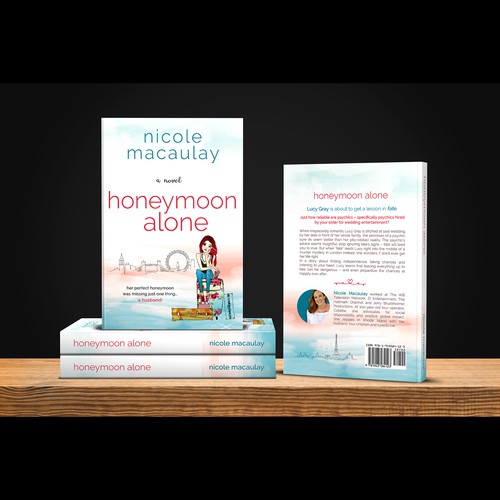 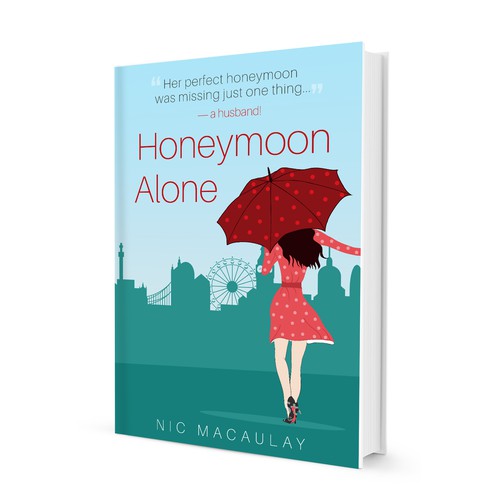 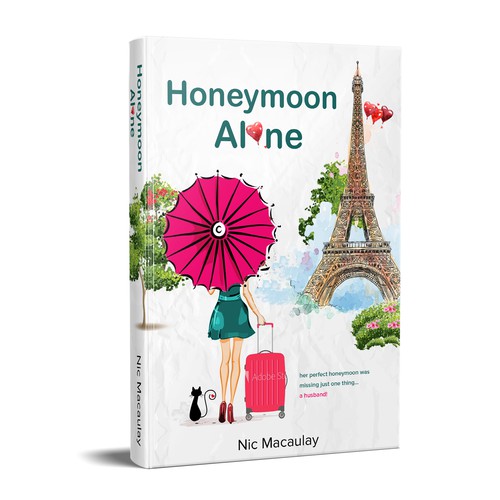 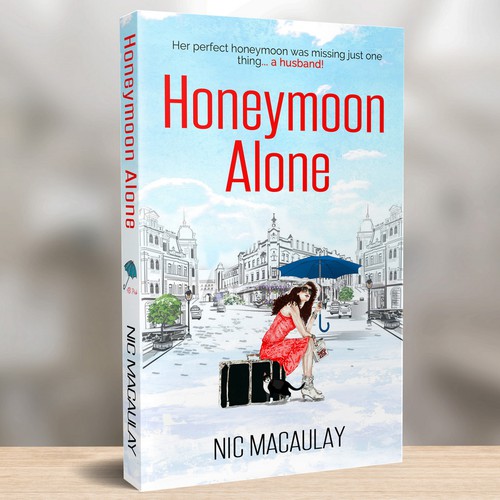 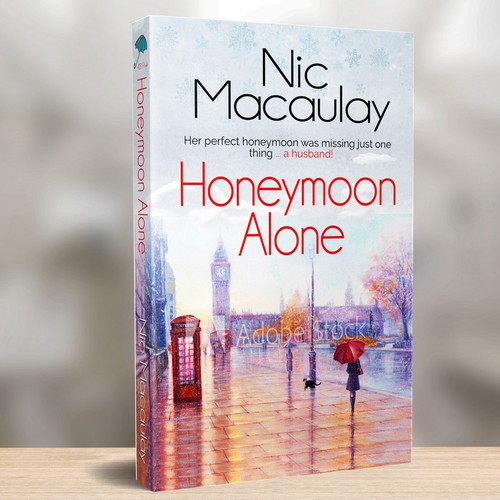 chick lit/comedy/women's fiction. back cover copy: Just how reliable are psychics – specifically psychics hired by your sister for wedding entertainment? When irrepressibly romantic Lucy Gray is ditched at said wedding by her date in front of her whole family, the promises of a psychic sure do seem better than her pity-riddled reality. The psychic’s advice seems insightful: stop ignoring fate’s signs – fate will lead you to love. But when “fate” leads Lucy right into the middle of a murder mystery in London instead, she wonders if she’ll ever get her life right.
In a story about finding independence, taking chances and listening to your heart, Lucy learns that leaving everything up to fate can be dangerous – and even jeopardize the chances at happily ever after.

colors I have been toying with for my personal brand that might be fun to work in or even brighten up: 26908f and fb586c.

This is a chick lit novel, my debut novel, called Honeymoon Alone. I'd like front/back cover designed, I am hoping for pops of color, something inviting, warm, with slightly romantic undertones, but really that kind of free-spirited look that would lend to a story about self-discovery. This protagonist is in her late 20s, figuring out life, and this is her first real adventure, getting away from her overbearing nosy family, and going to London (as well as a brief stop in Paris) for a little time away. There's a love triangle, but I don't want that graphically displayed. I love the idea of graphical illustration instead of a photo but am open to all ideas at this point.

**update:
Lucy Gray, the protagonist, is kind of a girl next door type. She's fun, free-spirted, but not fancy, not posh... she likes jeans and sneakers, is a teacher, and has reddish hair.

elements that could be worked in include:
- London
-Paris
-Boston
- tuxedo cat
-girl next door
- girl sitting on a suitcase
-passport
-rain
-umbrella
-snow
-the holiday season (caution here though, I don't want it to look like a Christmas book, but twinkly lights or something could be visually depicted)

I scaled back away from 'playful' and feminine as I want this to also have a bit more of a mature look to it (ala Emily Giffin) but the fun of Sophie Kinsella is also desired. I so far am not loving script/cursive type fonts, though I don't hate them either. I love clean sans serifs that have that kind of fun and open quality.

Cover designs by these authors should inspire you for what works well in this market:
Sophie Kinsella
Paige Toon
Emily Giffin
Jennifer Weiner
Marian Keyes

Below is a cover I created myself for a book design class. I don't love it, but it's an idea for something I toyed w/ including colors/ fonts and tone. That said, let your own design expertise and imagination run wild. If I was married to this design/idea, I wouldn't be here. I'm no designer :)

I love the idea of turquoise and pinks (pink toward red)... not so much black for the headers (obviously black for the back cover jacket copy).

Shallow Water Romance
749 $
Usually, women between the ages of 18 and 60.
295
entries
78
Designer
Texas photography book for adults and young professionals
US$ 399
Adults, professionals, ages 20-90
160
entries
36
designers
Need a powerful design for black female surgeon book- global
299 USD
any Black female from grade school to retirement around the world
147
entries
15
designer
Atmospheric cover for historical novel/medieval biography
359 €
Younger and older women who are interested in women's biographies and developmental histories of women People who are in
55
entries
14
designer graphistes
eye-catching design for historical adventure novel
359 €
Lovers of historical novels, roguish stories, adventurous events, also drastic, bizarre descriptions with a pinch of iro
60
entries
20
designer
To "Where the Moon Has Been" and back with your cover design for my fantasy novel
529 $CA
Adult and young adult fantasy readers of both genders, European and North American locations for the most part. Also li
146
entries
39
designer graphistes