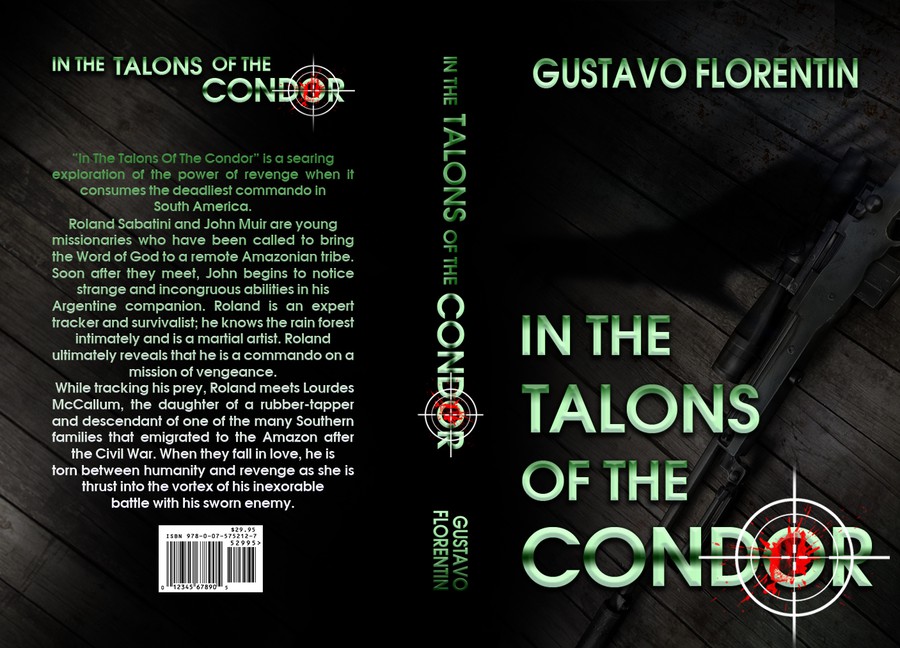 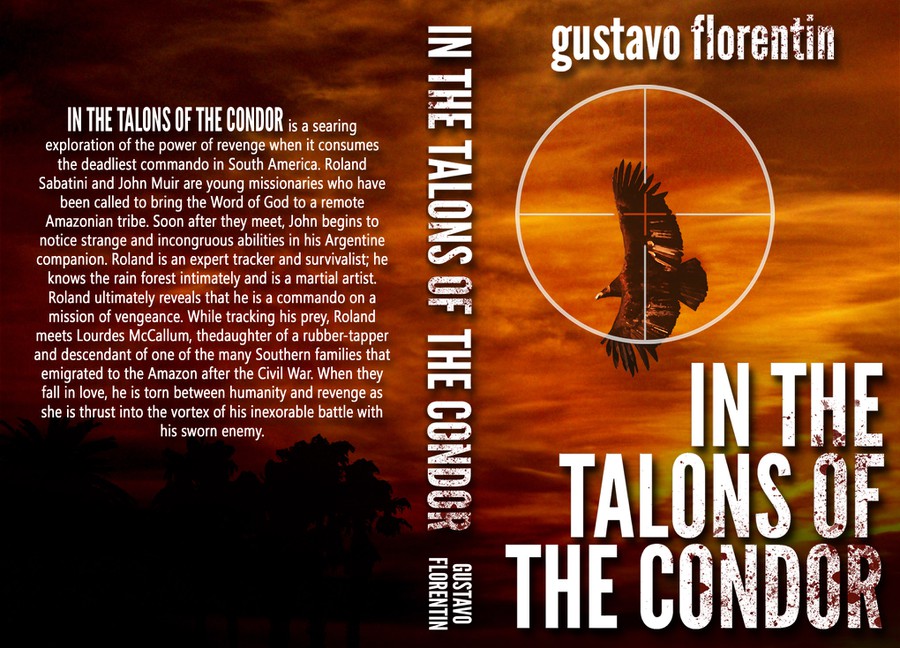 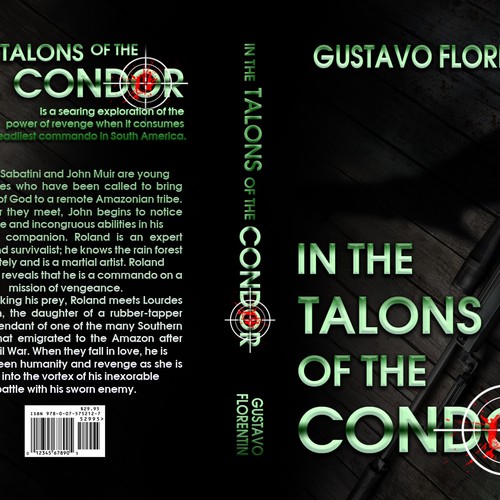 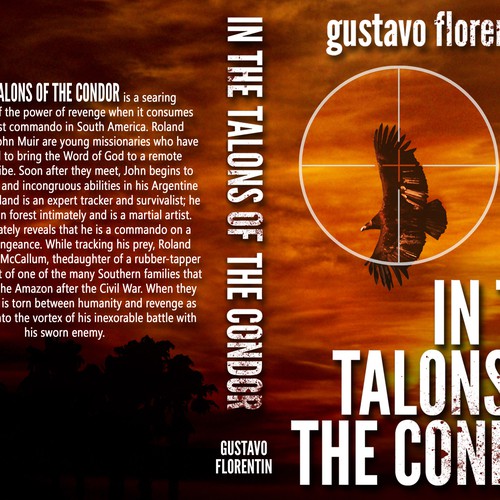 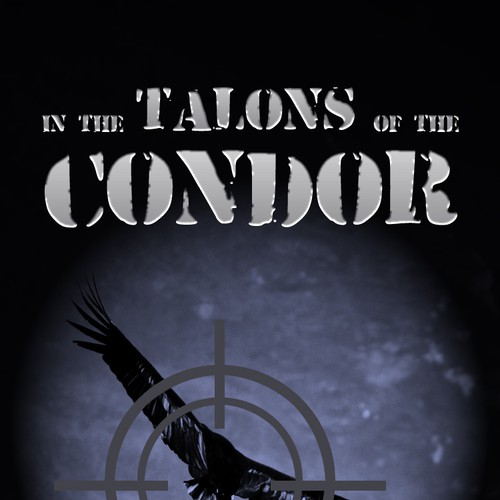 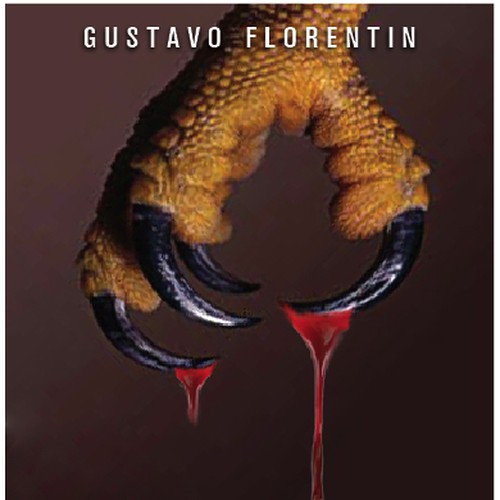 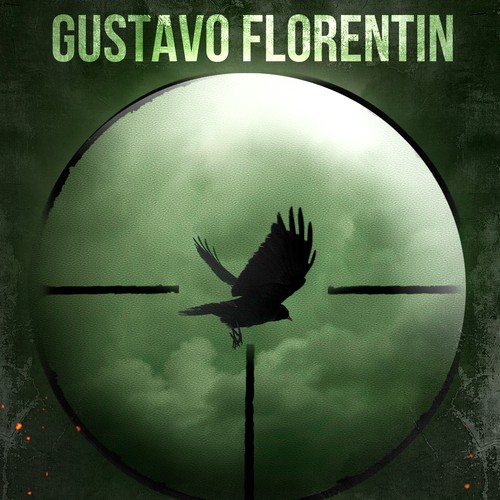 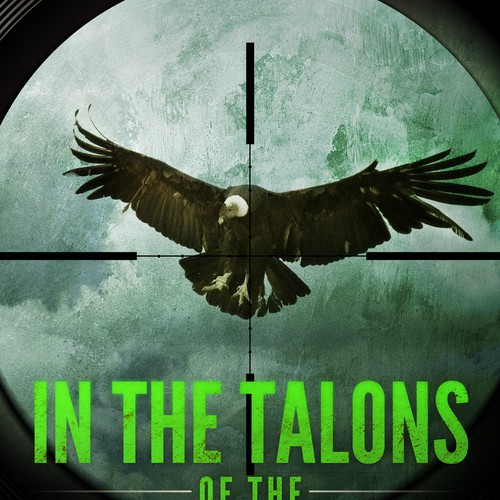 I need an cover for my novel.
IN THE TALONS OF THE CONDOR is a thriller which explores the power
of revenge when it consumes the deadliest commando in South America. Roland Sabatini is an assassin on a mission of vengeance in the Amazon. His target: Colonel Carlos Obregon who killed his family during the brutal Argentine dictatorship of the 1970’s. The cover could have the crosshairs of a riflescope and the image of a condor.

Title: In the Talons of the Condor
Author: Gustavo Florentin

The cover should be serious and sinister, in keeping with its dark subject. Avoid using a close-up of a condor in the design as condors are funny looking birds close up but sinister from afar. A flying condor is likely the best way to go. Make sure there is good contrast between the crosshairs of the riflescope and the target in order to give the military feel.  I've decided to make this both an e-book and a print-on-demand book, so I will now need a back cover and spine for the design. The dimensions for the book in inches are 6.75 length X 7/8 thick X 4.25 wide  The back cover should have the following text:

IN THE TALONS OF THE CONDOR is a
searing exploration of the power of revenge when it consumes the deadliest
commando in South America. Roland Sabatini and John Muir are young missionaries
who have been called to bring the Word of God to a remote Amazonian tribe. Soon
after they meet, John begins to notice strange and incongruous abilities in his
Argentine companion. Roland is an expert tracker and survivalist; he knows the
rain forest intimately and is a martial artist. Roland ultimately reveals that
he is a commando on a mission of vengeance. While tracking his prey, Roland meets Lourdes McCallum, the
daughter of a rubber-tapper and descendant of one of the many Southern families
that emigrated to the Amazon after the Civil War. When they fall in love, he is
torn between humanity and revenge as she is thrust into the vortex of his inexorable
battle with his sworn enemy.

Minnesota Cabin scene to appeal to women who like love stories
$399
Female, USA, 18-50
142
entries
27
diseñadores
I need your inspirational eBook cover design and expert advice on refining my subtitle
EUR 299
Frustrated people (early-adulthood to middle-aged) who're too busy and too distracted to keep in shape; and who're tired
158
entries
22
diseñadores
Book cover for non-fiction
199 US$
156
entries
13
diseñadores
paper back and ebook cover
GBP 319
Someone is reading this book to learn the most effective way to write a to-do list that will keep them motivated and pro
51
entries
20
diseñadores
The Garden of Shadows and Bones
MX$10,099
My books are geared towards New Adult. They are mainly about dark fantasy with witches and magic.
62
entries
24
デザイナー数
Book Cover for WWII Historical Fiction
US$ 399
People who like WWII and historical fiction
71
entries
21
designers