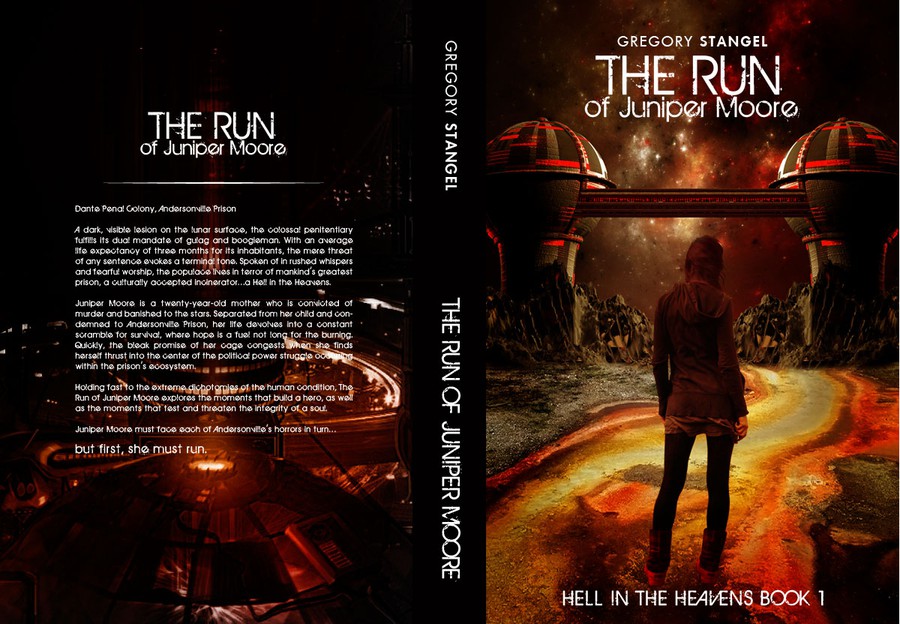 Book Cover for the first installment of a new serial 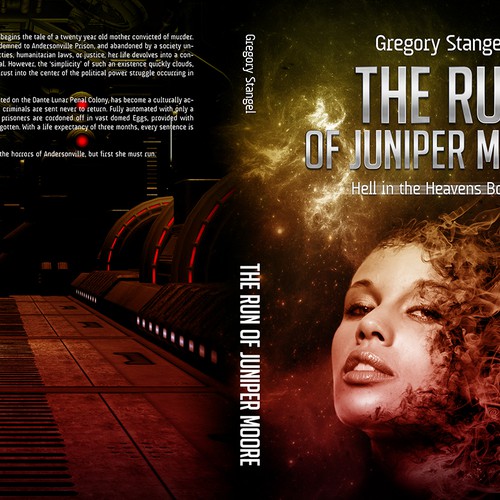 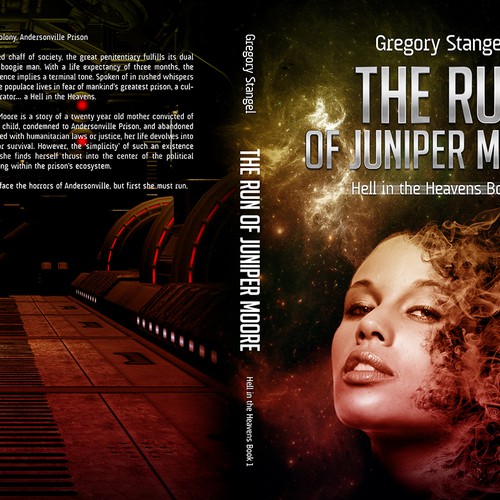 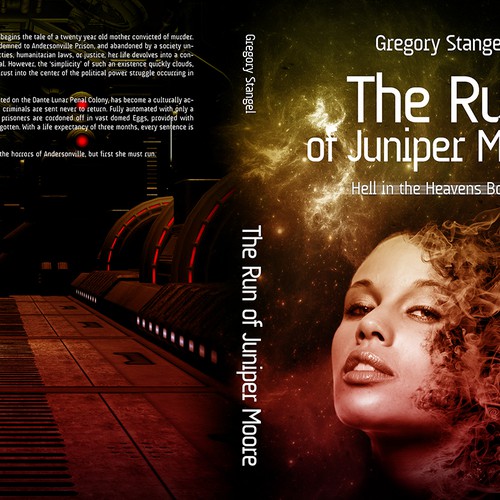 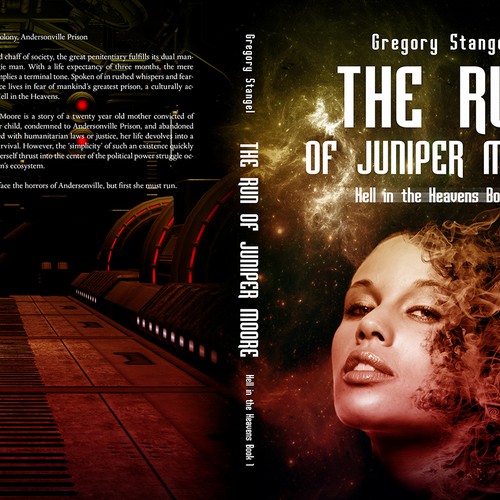 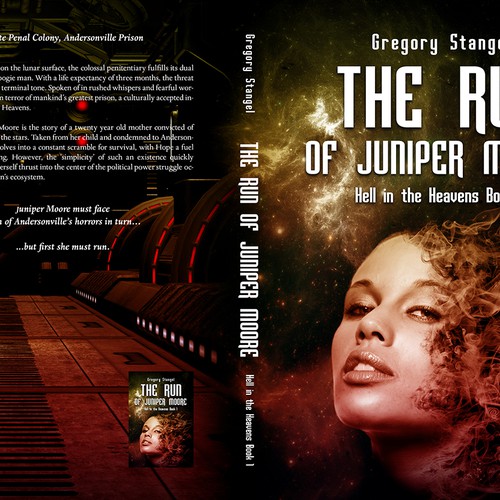 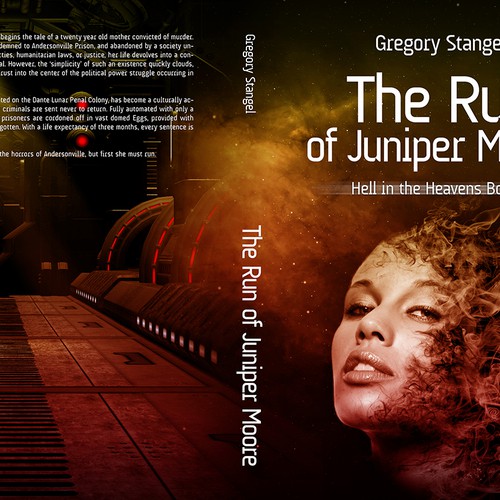 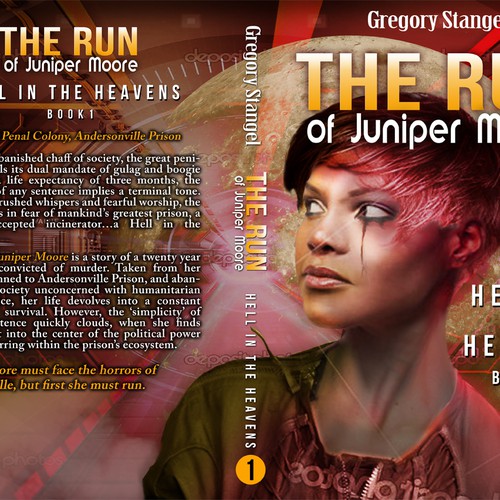 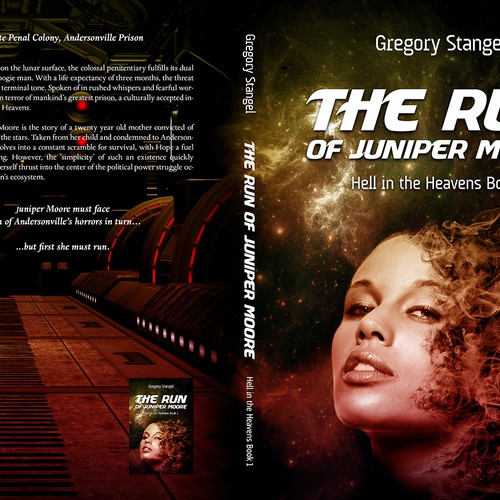 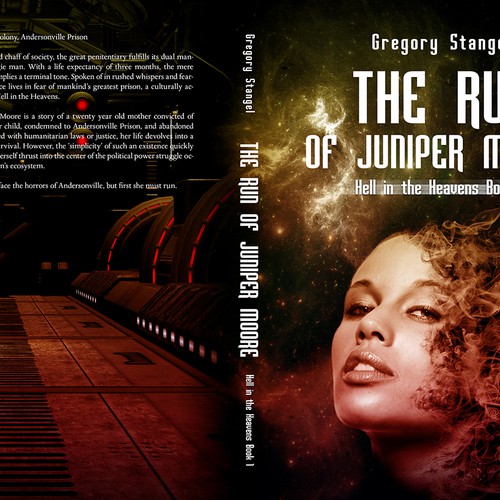 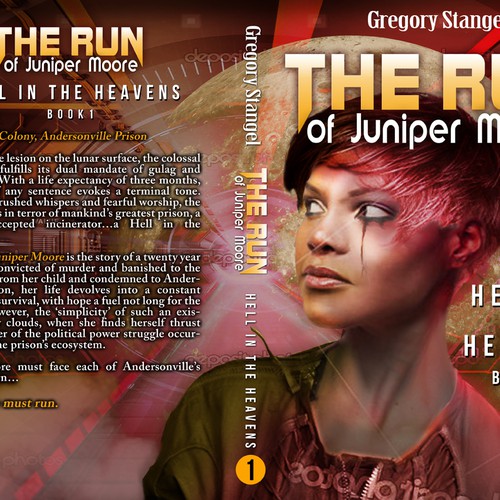 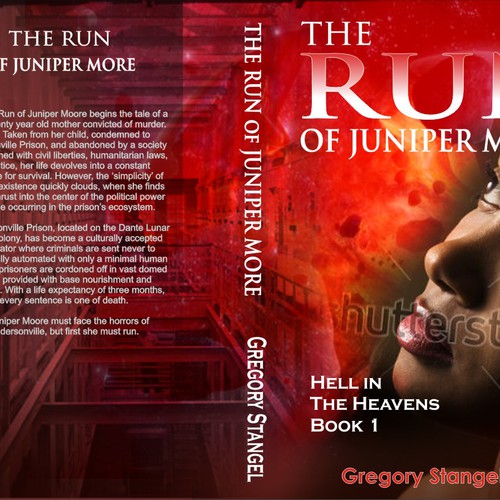 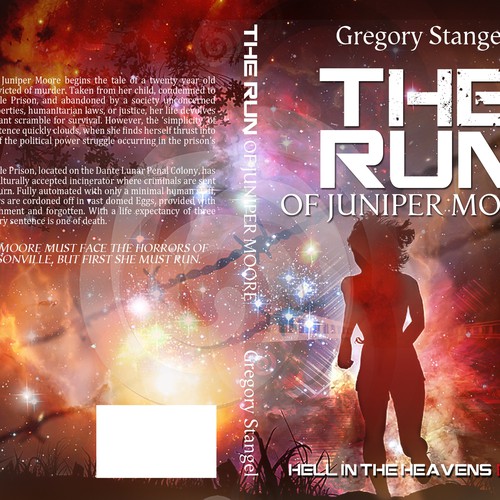 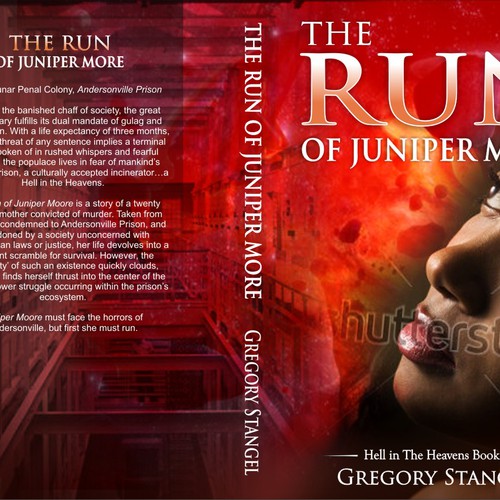 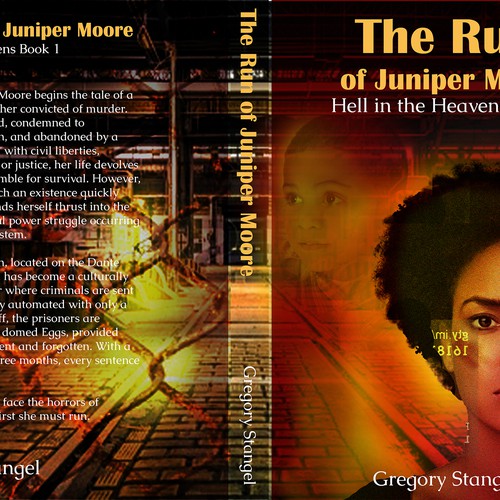 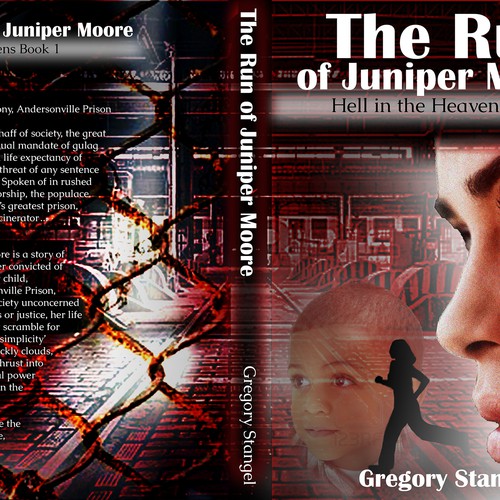 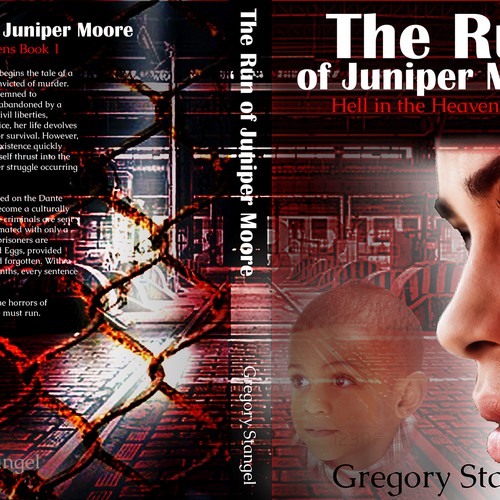 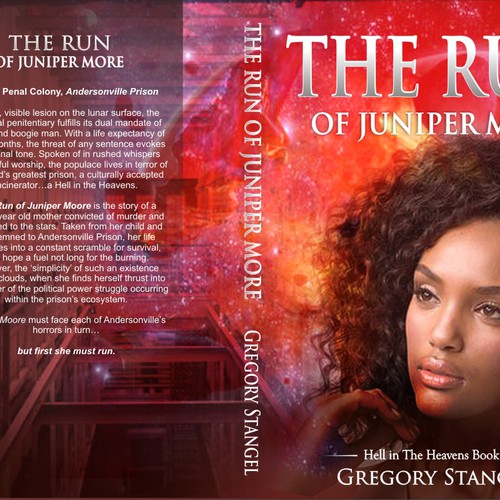 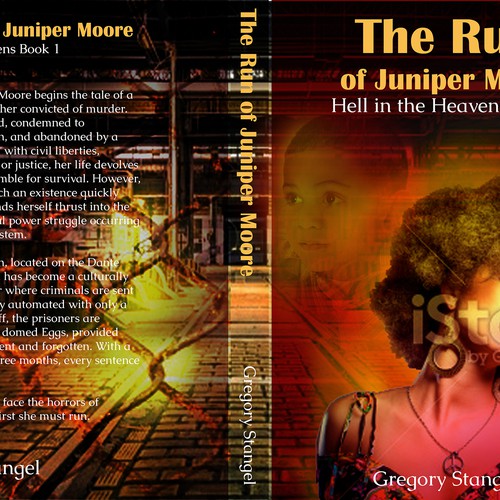 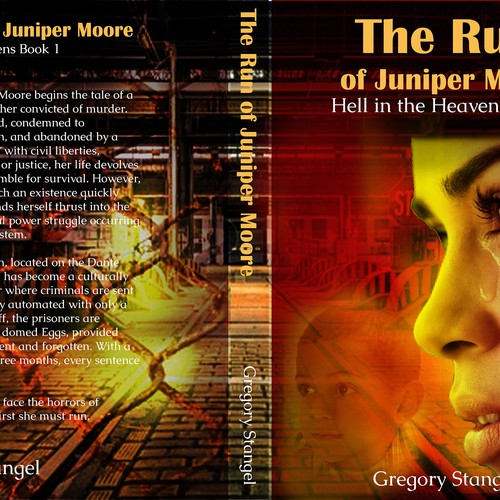 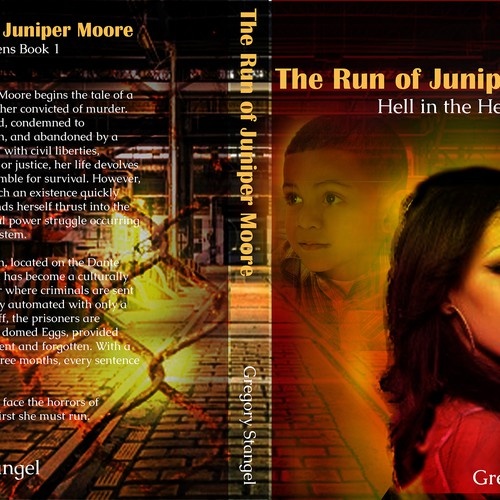 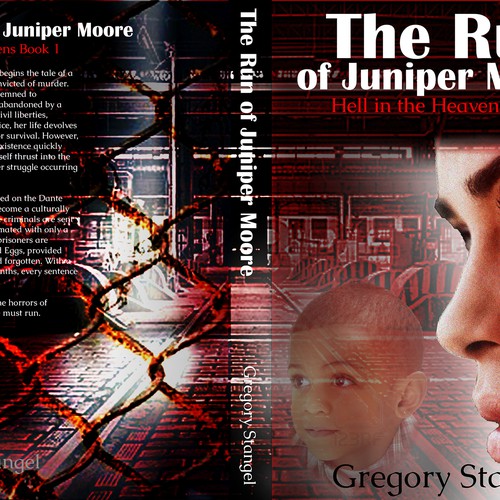 Dystopian story of a young mother sentenced to Andersonville Prison on the Dante Lunar Penal Colony. Stemming from domestic violence and abuse of all kinds,the heroine, Juniper Moore (aka Fee-Phi), murdered her 'boyfriend'. This story was inspired by the Chris Brown/Rhianna incident and because of such I always envisioned Juniper as the pop singer.

I'm looking for something that literally embracing the title (Juniper Running) or for something triumphant (Rocky up the steps, hands over head/John Bender's last 'punch' in Breakfast Club). I can be talked into and color scheme but as this is the first in a three part serial series, I'd like to maybe have a shade of red as the dominant hue.

As mentioned before I always see Juniper as Rhianna.

The majority of the serial series will take place inside a large domed prison more Mad Max and Cyber Punk than Shawshank.

The prison is fully automated.

From height the complex looks like a Vaudevillian barbell with the two domes connected by a thin 'bar' housing the prison's skeletal staff and automated systems.

The Run of Juniper Moore begins the tale of a twenty year old mother convicted of murder. Taken from her child, condemned to Andersonville Prison, and abandoned by a society unconcerned with civil liberties, humanitarian laws, or justice, her life devolves into a constant scramble for survival. However, the ‘simplicity’ of such an existence quickly clouds, when she finds herself thrust into the center of the political power struggle occurring in the prison’s ecosystem.

Andersonville Prison, located on the Dante Lunar Penal Colony, has become a culturally accepted incinerator where criminals are sent never to return. Fully automated with only a minimal human staff, the prisoners are cordoned off in vast domed Eggs, provided with base nourishment and forgotten. With a life expectancy of three months, every sentence is one of death.

Juniper Moore must face the horrors of Andersonville, but first she must run.

Precipice - Book Cover for a Mystery/Suspense novel
299 US$
160
entries
23
diseñadores
Horror artistry wanted for book cover.
299 US$
It's a book for late teens and adults. It's a dramatic horror book. Similar to THE WALKING DEAD except there is no ...
60
entries
12
designers
RED PLANET – need your skills and imagination. Create a book cover for a famous Scifi novel
279 €
Publisher of fantasy and horror novels, science-fiction literature as well as game books and role-playing games.......
64
entries
24
Designer
Create an intriguing American Civil War novel cover
799 US$
I write American Civil War novels for ages teen through adult for the US market....
56
entries
18
diseñadores
I want to build a lasting business relationship with ALL of my clients.
199 £
Author, writer of action, crime thrillers. Target audience will be fans of the genre (ie NOT YA sci-fi and fantasy r...
58
entries
13
designer
The Girl Who Stopped Lying book cover
499 $
We publish books for the Swedish market. Our books has a Christian message but our books are targeted for everyone....
91
entries
39
Designer