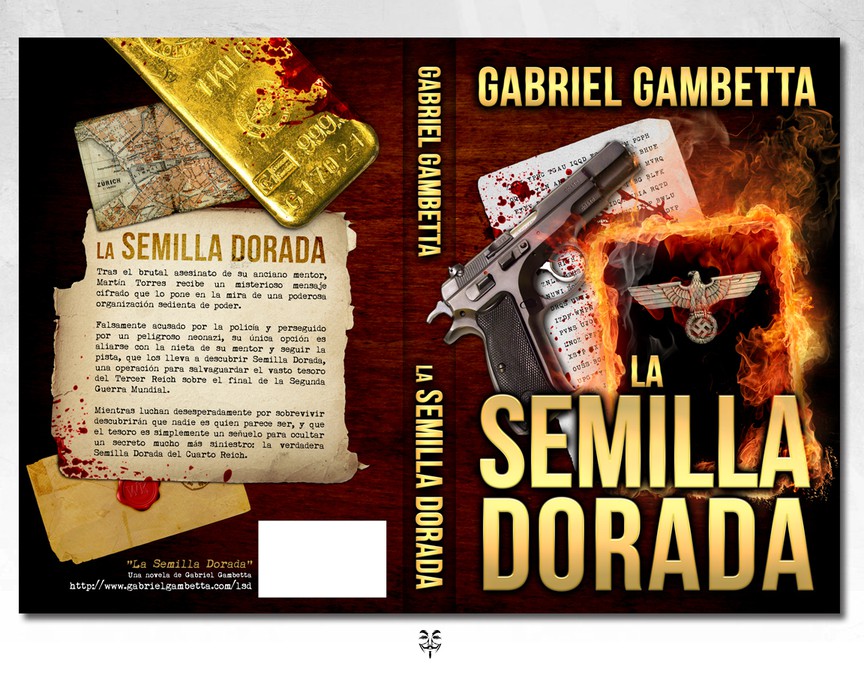 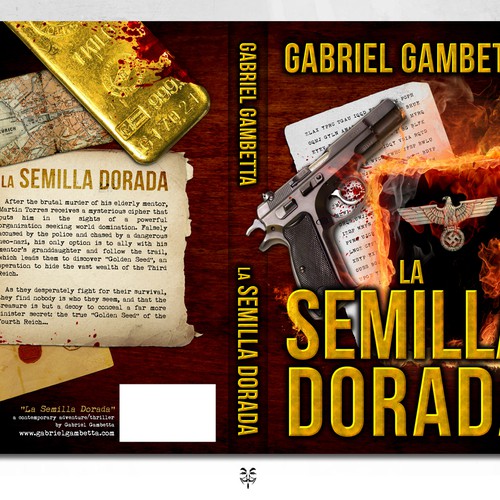 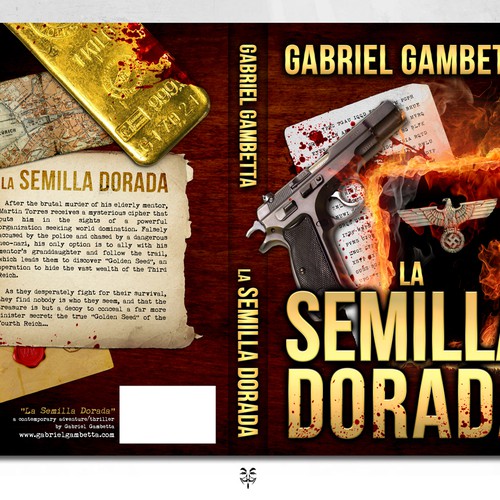 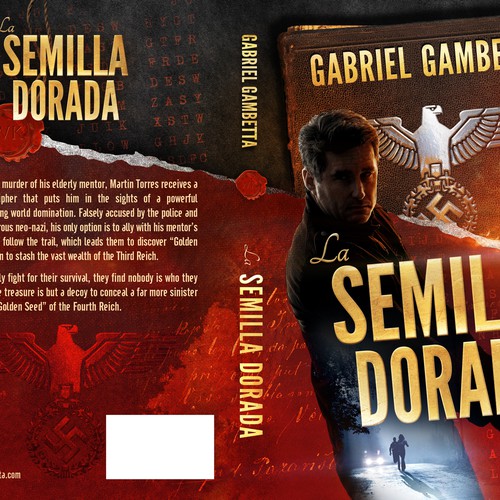 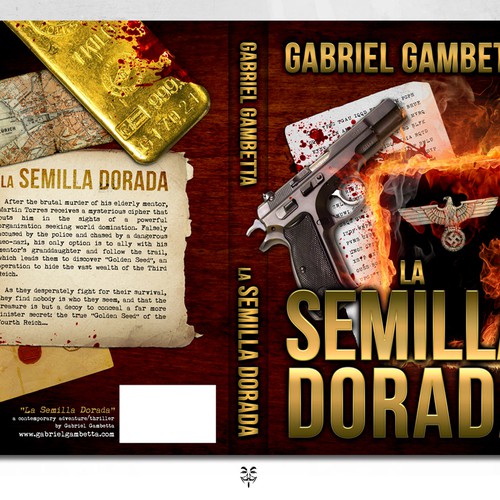 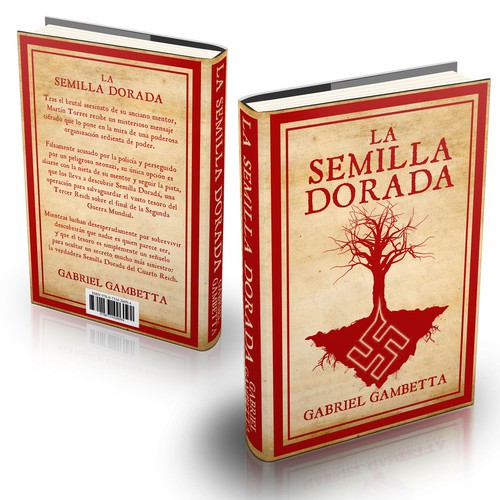 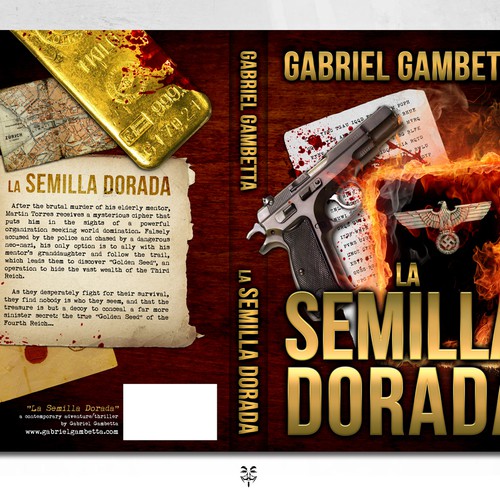 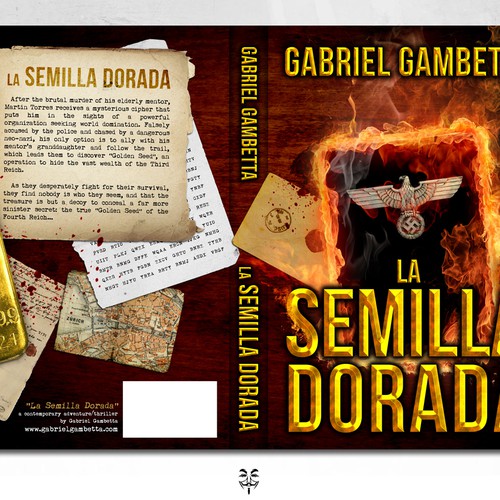 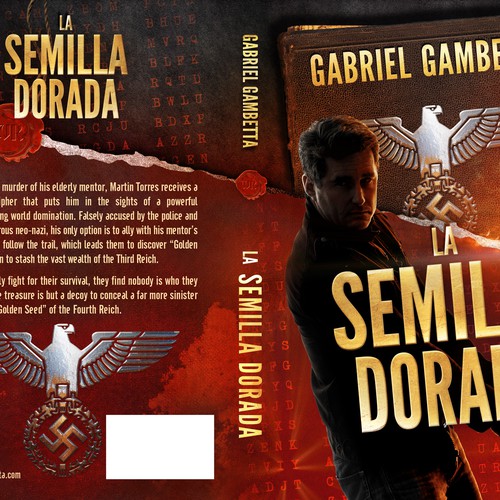 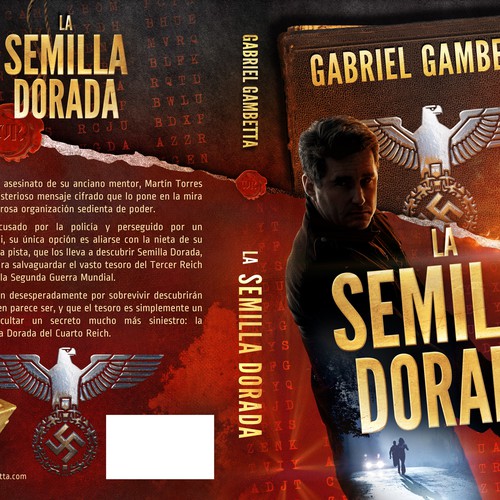 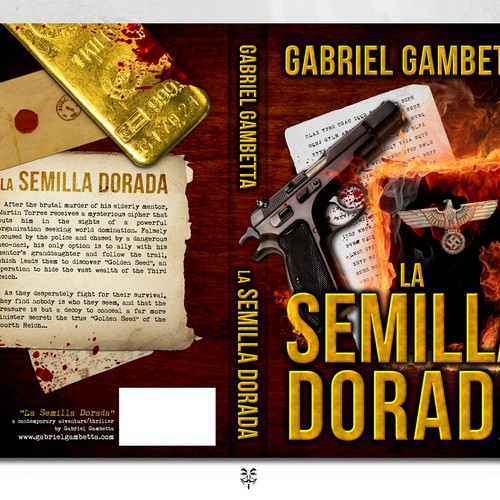 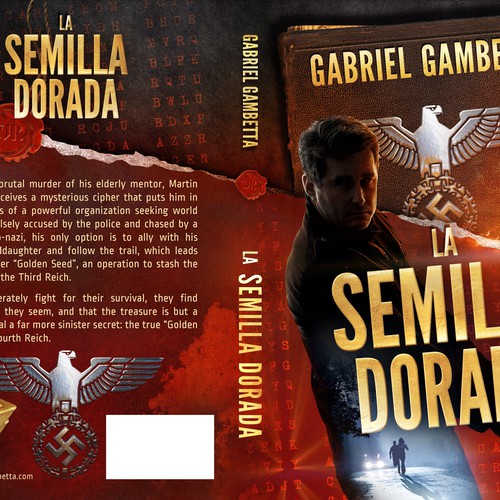 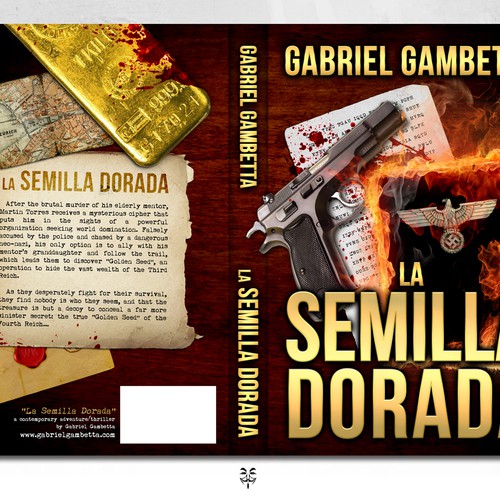 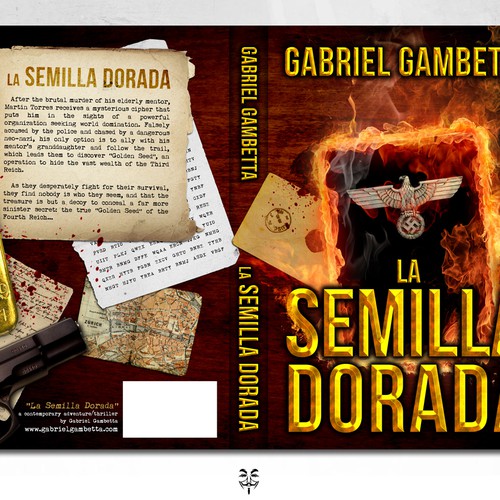 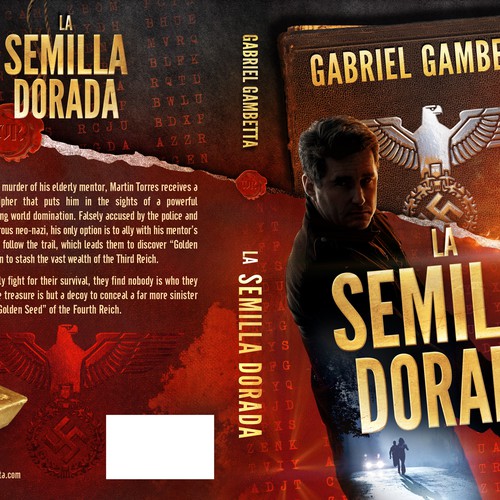 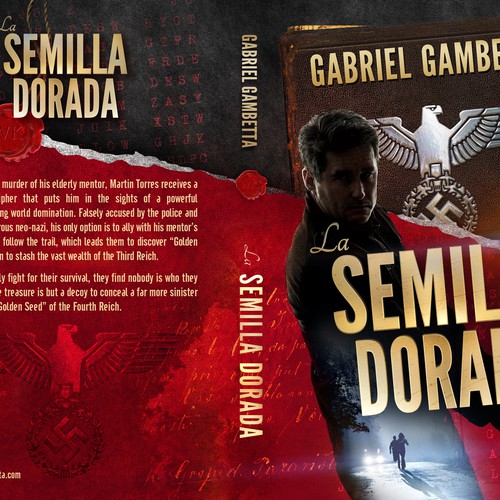 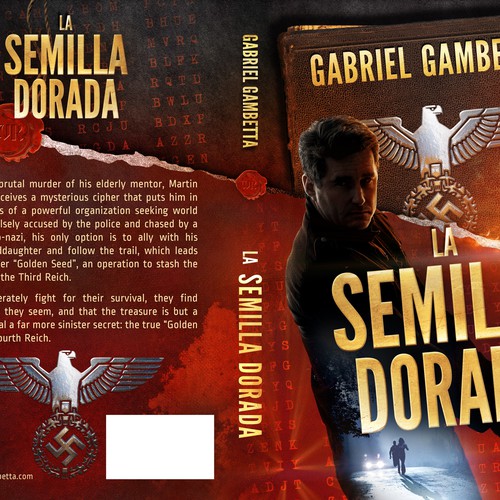 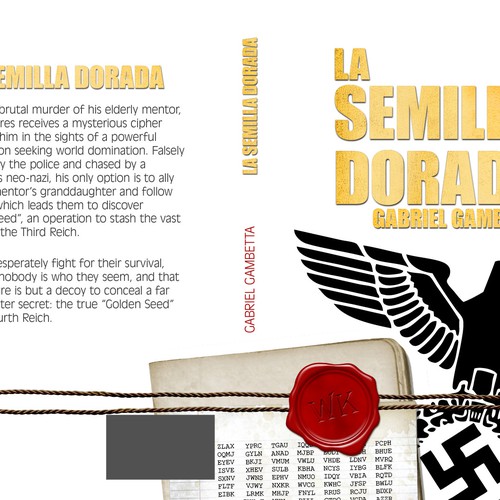 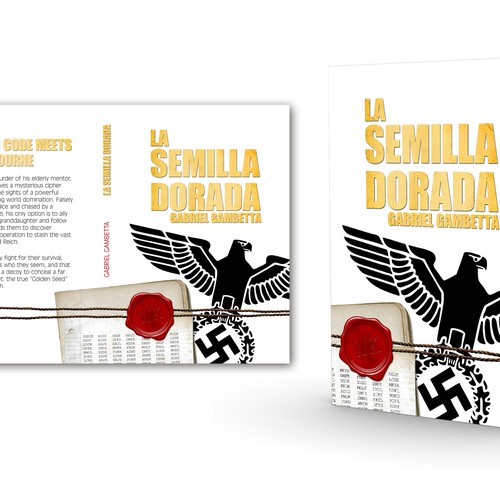 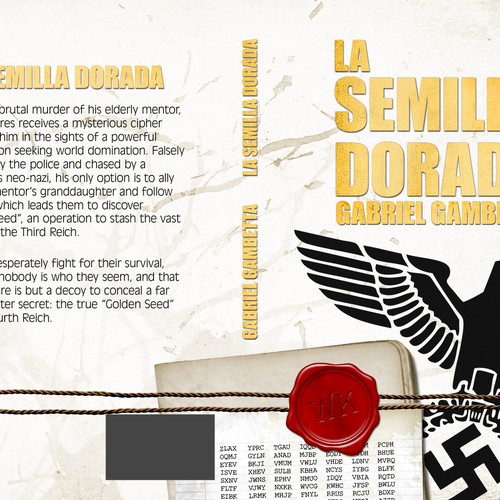 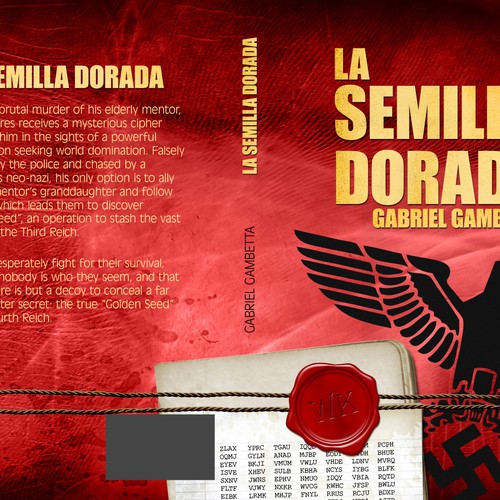 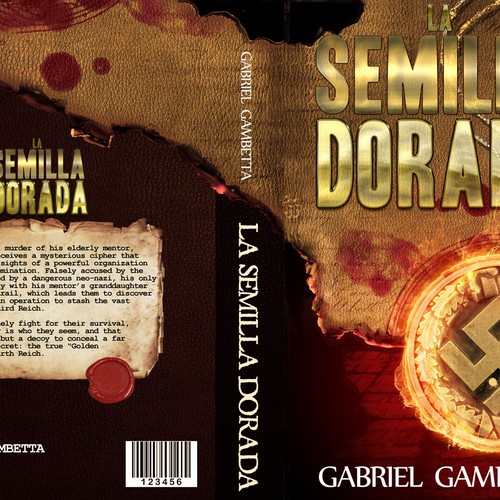 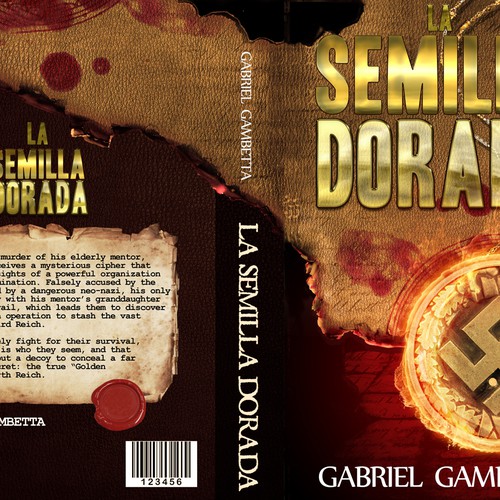 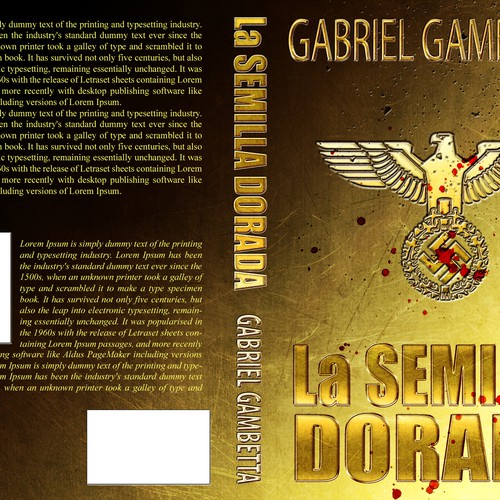 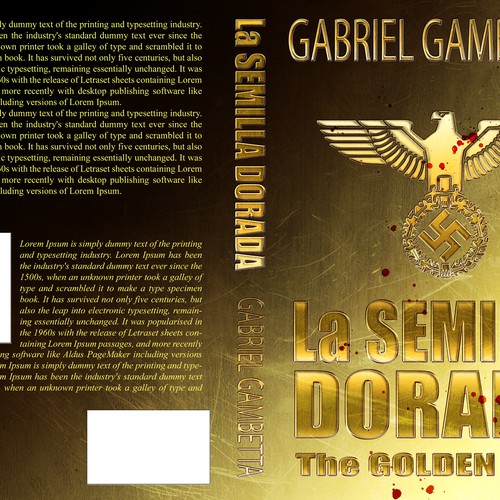 After the brutal murder of his elderly mentor, Martin Torres receives a mysterious cipher that puts him in the sights of a powerful organization seeking world domination. Falsely accused by the police and chased by a dangerous neo-nazi, his only option is to ally with his mentor’s granddaughter and follow the trail, which leads them to discover “Golden Seed”, an operation to stash the vast wealth of the Third Reich.

As they desperately fight for their survival, they find nobody is who they seem, and that the treasure is but a decoy to conceal a far more sinister secret: the true “Golden Seed” of the Fourth Reich.

Here are some important objects and themes (but feel free to come up with something completely unrelated):

* A convoy of Nazi trucks through the Alps in the night, in 1945 (1945 is the prologue; the novel happens in the present)
* Crates full of gold bars.
* An old leather-bound journal with a Nazi eagle on the cover.
* An old envelope with a red wax seal. Initials WK, not necessarily visible.
* A page of random-looking uppercase typewritten letters in seven columns of 4-letters.
* Man and woman (the protagonists) running away from a pursuer.
* A woman, possibly in silhouette. There are two major female characters, and whether they're good or bad is unclear until the end, so this should be especially ambiguous.
* Important locations are Zürich and a random village in the Alps near a hook-shaped mountain.
* An evil, evil, evil ~90 year old Nazi mastermind.

Other considerations:
* Visible title: "LA SEMILLA DORADA". "THE GOLDEN SEED" should also work. "THE" and "LA" can be less prominent.
* Visible author name: GABRIEL GAMBETTA
* Author name can/should be smaller than novel title.
* Title and Author in the spine.
* Print size will be 6” x 9”. Spine width is 0.83". But the front cover should work for Kindle as well.
* Should be readable in an Amazon-sized thumbnail.

Back Matter
* Enough space for a couple of paragraphs of text. Feel free to use the description above as placeholder.

As a personal preference, I like to have Title/Author over the cover image; no solid colored sections. A continuous back-spine-front image would be nice as long as the spine reads clearly, but I don't feel strongly about this.

If you use stock images, please list them. Using a *paid* stock image won't automatically disqualify your entry, but it better be mind-blowingly awesome in that case :)

Precipice - Book Cover for a Mystery/Suspense novel
$ 299
160
entries
23
Designer
Can you create the first eye-catching front cover for a series of sci-fi/adventure/romance novels?
539 £GB
Amazon bestselling author of contemporary women's fiction targeted at women in the 25-55 age group...
305
entries
42
designer graphistes
RED PLANET – need your skills and imagination. Create a book cover for a famous Scifi novel
279 €
Publisher of fantasy and horror novels, science-fiction literature as well as game books and role-playing games.......
64
entries
24
Designer
Looking for a Punchy Public School Theme Cover!
299 $US
20
entries
5
designer graphistes
I have an awesome sci-fi book! can you make an awesome scifi book cover?
400 $US
Need a kick-butt book cover for the second book in my post-apoc sci-fi series. Are you a scifi artist? Jump on in!
127
entries
25
designer graphistes
Create a Beautiful, Custom E-Book Cover For an Inspirational Christmas Story.
799 $US
I'm a writer who has just finished (re)writing a fiction book I plan to put out on Kindle. I also plan to have it out...
76
entries
22
designer graphistes

Jetzt starten
June Jenson and the Coins of Cassidy Book Cover
399 $CA
Emily Harper is the bestselling and award winning women's fiction author of White Lies, Checking Inn, My Sort-of, Kin...
53
entries
9
designer graphistes
Urban fantasy author needs exciting book cover design.
299 $US
Urban fantasy author who writes about vampires, witches, werewolves and other supernatural beings for entertainment....
55
entries
8
designer graphistes
Book Cover Design For First Book In Series - Fun Chick Lit/Romance
299 $
Galahads Press is a self-publishing company. We are focused on writing fiction in the chick lit genre with a focus o...
50
entries
13
Designer
Eye-Catching Vampire Novel Cover
EUR 279
The book is a Vampire Novel. The aiminggroup should be mainly females between 25-45....
169
entries
31
diseñadores
"Emma" a short story that needs a book cover
299 $US
Hello Designers! I am looking for a short story cover. It falls under the literary genre. My future readers are A...
105
entries
39
designer graphistes
Take us to new heights by designing a book cover first of 3 titles
499 USD
Provide digital promotion to individuals and organizations seeking to share cooperation via the masters of messages....
169
entries
18
designer
Erfahren Sie mehr über buch oder zeitschriften cover Design
So funktioniert's