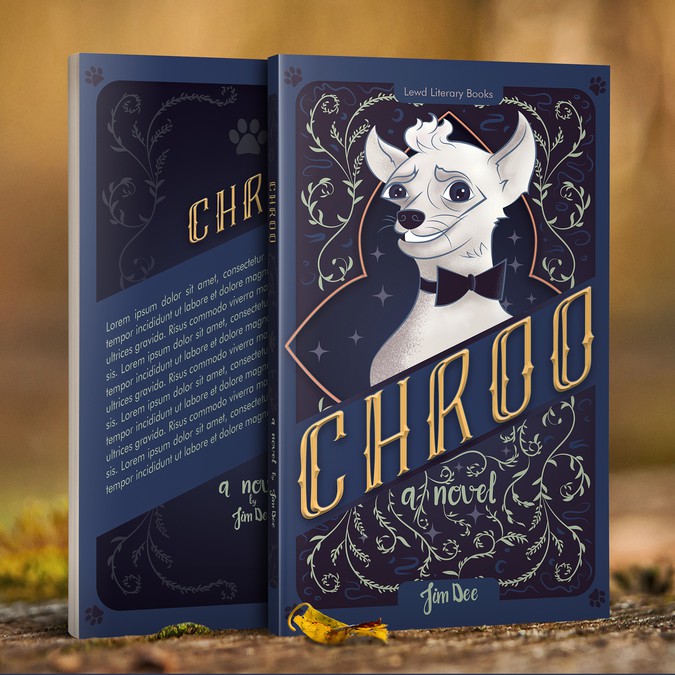 ALERT! Once Upon a Time, the Richest Chihuahua Saved the World. Can you see Chroo's charming face? 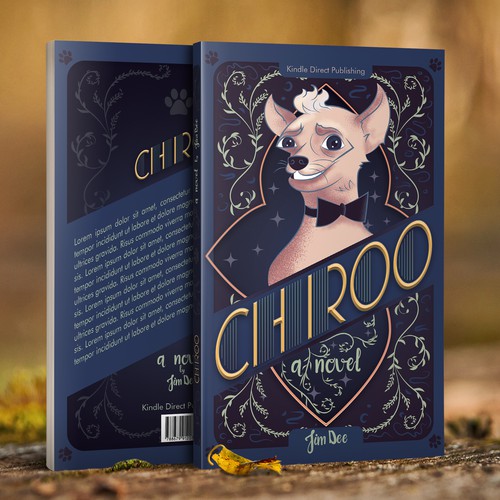 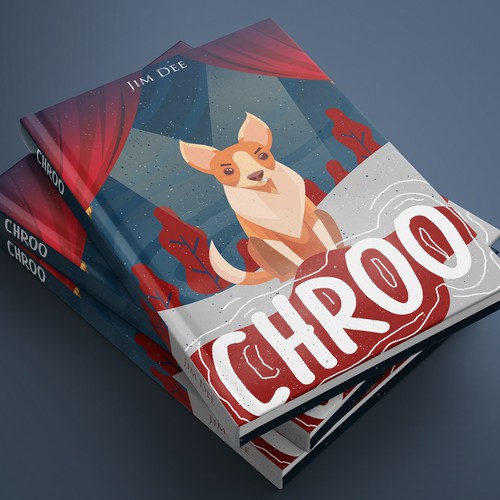 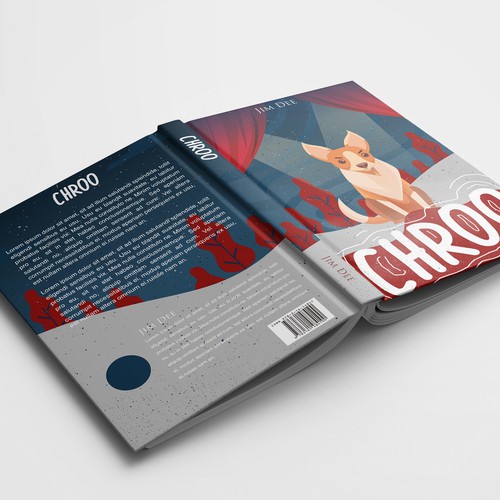 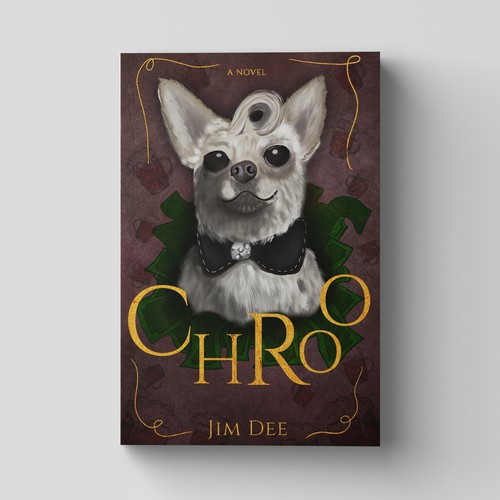 When a celebrity heiress inherits vastly more than a mere fortune, she and a cast of humans & animals work to take down a sadistic, international game played by eight trillionaires. The stakes? The freedom of the entire world!

The target audience it will appear most to would probably be those 25-50 years old. It should appeal to both men and women. It's in English.

BOOK COVER w/ ILLUSTRATION:
I'm looking to get a cover designed for a novel I'll be self-publishing as a paperback with Amazon Kindle Direct. Hopefully, someone here will be able to (1) bring some ideas to life that I include below (via illustrations / examples) and/or (2) maybe come up with a better idea. The full cover is one big graphic with the front cover on the right, the spine in the middle, and the back cover on the left. I'm mostly concerned with the front cover area, but designs that encompass the whole area are fine, too.

ESSENTIAL ELEMENTS:
* Novel Title:  Chroo
* Author Name:   Jim Dee
* The front covers of novels usually feature three text items:  (1) the title, (2) the text "A Novel" (set smaller), and (3) the author's name (usually in that order). Sometimes those are all done using fonts, sometimes the title is drawn or designed somehow, sometimes the title is in all caps, sometimes not.  I'm open to whatever works best for the front cover. But, I generally **don't** like straight-up fonts where the text is simply typed in & that's it.

* Feel / genre:  As you'll see, the book features many animal characters, which might make you think it's a kid book or young-adult book. But, it's actually geared toward literary, imaginative adults, most likely in the 20+ age range. I just wanted to mention that now, as it may help you imagine the animal aspect in a different way (ie more serious looking, complex, fantastical, wondrous, etc.  -- not cartoonish or what might appeal to kids more).

* A representation of the title character (Chroo). This I definitely want. He can be alone, in some context, and/or with other characters. But, he should be prominent or noticeable in some way. Chroo is a Chihuahua. He's a larger-type of Chihuahua (not the type you can hold in your hand, but the kind you could hold on your arm), with hair of platinum blonde color. He's a handsome little devil, stylish, with big eyes. He's a smart-ass, so he might have a bit of a smirk or a bit of a smile. He's got a little tuft of wild hair on his head, like a little cowlick. He's also the world's richest Chihuahua -- super-posh. And he loves beer. I'll include some photos of Chihuahuas that I think are more or less Chroo-like, for reference -- although keep in mind that THIS Chroo has to be largely platinum-blonde in color (basically a silvery color).

* TOTALLY OPTIONAL CHARACTERS:  Here are some other notable characters, in case anyone is inspired to include additional characters in the design (not required, but if that's your idea, I'm happy to see it!):

--  If you're only going to do ONE other character, it should be Chroo's human. She's a 27-year old female. Looks-wise, think Paris Hilton w/ long platinum-blonde hair.  If she were in the pic, she would look sexy, smart, attractive. She often wears clothes with "777" (three sevens) on them, but that would be a subtle detail.

* TOTALLY OPTIONAL THEMES / IMAGERY  (again, not required, but just for inspiration):  If you'd like some ideas of prominent scenes, locales, items from the book, some would be as follows.  ***I DO NOT*** think these would go well combined randomly and/or paired with random characters listed above. But, if any of the following strike you as something you'd like to depict or work with, then EMAIL / MESSAGE ME FIRST and I will happily describe a scene to you in more detail (ie who's in it, and what that scene looks like). Some would be:

--  A kind of weird roulette game inside a hotel suite (with Upferra and Chroo). A roulette wheel could really be striking, as they're visually distinctive. If you use this image, just make it abstract -- no numbers, just colors.

--  A troupe of cross-dressing langurs attacking a train

* Notes:  The challenge here, as you can tell, is that the book is generally fiction for adults, yet the characters and situations are often pretty wacky. So, a book cover that might have cross-appeal between adult and older "young adults" might work.

* I'm super-cool w/ looking at super-rough sketches and/or just conceptual ideas via email or messages prior to your developing any actual designs, if that helps anyone. I'd hate to have anyone spend a lot of time developing something that wouldn't stand a chance of winning. So, email me anytime (or contact me however this system works).

POSSIBLE INSPIRATION:
* Originally, I was thinking maybe something like what I see at therenaissancepet.com or crownandpaw.com  or nobleandposh.com.  They do these portraits of super-rich-looking animals. There's even a woman artist from Russia (goes by Buridan's Cat) who does these in actual oil paintings.  But... I wasn't sure after seeing them everywhere, if they still seemed original to me. So, I'm not sure if that's the concept I want. But, this concept, paired with something from the above descriptions, *could* work, if anyone feels moved or inspired with an idea. Generally, though, I now think that these kinds of portraits, alone, are kind of over-done.

* I took the liberty of looking around on Google images for book covers that I LOVE. I'm attaching a graphic of them -- not necessarily to suggest any specific design, but to at least show what aesthetic appeals to ME. If I step back and look over those example covers, I see things like dark, rich colors, complex designs, rarely any straight fonts (almost all illustrated and/or transformed), visually stunning, NO photos, somewhat fantastical, somewhat whimsical.  Not sure what else ... take a look, as maybe those will help convey my personal sense of what mood I'm after.  I think maybe a few of them ("The Girl Who Drank the Moon" and "Crenshaw") might trend a bit younger than I'm shooting for, although I still love them.

* The #1 area I'm concerned with is the FRONT COVER, although if you want to do a wrap-around design, that would be fine, as well, so long as the front cover also looks good alone. The spine and back cover can be either a plain color, or part of the design, whatever you think looks nicer. (Just not plain white, as I'm almost certainly not going to like that.) I'm decent in Photoshop myself, and will finish up with any back-cover text and other minor elements, possibly building on the winning entry's front cover somehow. If you do the spine, leave some room at the bottom (bottom few inches), as I'll probably put a publisher logo there of some sort, which I'll do later on.

* Don't worry about the ISBN area. Just leave room for that, as indicated on the template (see the Amazon template).

AMAZON KINDLE SPECS FOR THE COVER:
* If I'm allowed to upload documents, then I'll attach a cover template. However, if you want to download the Amazon Kindle Direct cover template yourself, it is available here https://kdp.amazon.com/en_US/cover-templates  The info you would need to get the correct template is:

THE DELIVERABLE:  WHAT YOU NEED TO DO TO WIN:

* Deliverable should be an ADOBE PHOTOSHOP document. (I have Adobe Photoshop CC, so as long as I can open it, we'll be fine.)

* Please do your work in LAYERS:  Please start by placing the above Amazon book cover template as the bottom layer. Note that this is 3645px x 2625px, at 300dpi. I highly appreciate various elements, as appropriate, being separated into intuitively-named layers in case I need to edit or modify anything. This would definitely apply for standalone elements like copy on the spine, any copy on the back, etc. Just know that I'm probably going to wind up tweaking things, so if you can make that easy for me, I'd appreciate it.

* For the WINNER only:  Any TEXT layers used should be rasterized prior to delivery (so I don't need the fonts).

OTHER NOTES:
* Winner gets the cash prize, along with a design credit on the inside of the book in the front matter (in perpetuity, in any/all forms I publish this book in, so long as your artwork is used). And my gratitude (which I realize doesn't pay any bills, unfortunately).

* All illustration and design should be ORIGINAL. No stock photography (I really don't like the look of photos, anyway, on book covers) or any other potentially copyright-infringing sources allowed. Freehand drawing or free-made Illustrator graphics are best. By entering the contest, you warrant that all aspects of your submission are original.

* If you are selected, you grant full rights to me to use and/or modify the winning artwork in any media, as needed, going forward without further compensation. (For example, I'll be doing screen-grabs for promotions, using your cover to make alt covers for ebooks or audio books, or for ads, or whatever other promotion I'll do going forward.) I know some of that maybe sounds harsh, about my being able to use your artwork any way I want or need in perpetuity. But, in reality, I'm told that most self-published books only sell in the hundreds of copies, anyway. I did the math on Amazon... if I sell a paperback for like $17/copy, I get like $2/copy, and much of that'll go back into promotion costs. So, FWIW, you may well make more $$$ than I will on this project.

* Finally.... email or message me anytime during this contest, about anything! Want more info? Message me!  Want more specifics? Message me! Want clarification? Message me! Help me to help you & I'll do all I can. Thank you!!

Yes, I do NOT like photos / photographic imagery, unless maybe you really obfuscate it using filters. In general, please avoid! I also generally do NOT like fonts (esp. if just typed without any styling). I really prefer illustrated and/or highly altered fonts, where needed. SEE the example covers I've attached for inspiration. I prefer darker / richer colors, mainly. That doesn't mean don't use yellow or whatever. But, see if you can determine my design sensibility by looking at the example covers I've uploaded here.

Jetzt starten
Classy cover for a memoir. A woman discovers a family secret; her real father was a priest.
499 US$
Classified as memoir, I see my audience as women, middle aged plus. Women interested in family relationships and the inh
158
entries
38
diseñadores
paper back and ebook cover
GBP 319
Someone is reading this book to understand how to get the best loan offer by boosting his three-digit credit score. He m
43
entries
8
diseñadores
Create a Cover for a Spiritual Book by a Best-Selling Author
300 $
Our target audience consists mainly of women (70%), aged 40+, interested in new age spirituality.
84
entries
19
Designer
We need a powerful book cover for a Science-Fiction novel
EUR 359
The target audience is between 25-45 years old, speaks French (France, Canada, Belgium, Switzerland), who likes Sc-Fi
67
entries
12
diseñadores
The Death of Neo-Darwinism
199 US$
This is a hot topic and would be of interest to anyone in the academic community regardless of the discipline.
26
entries
11
designers
The Garden of Shadows and Bones
MXN 10.099
My books are geared towards New Adult. They are mainly about dark fantasy with witches and magic.
62
entries
24
diseñadores
Erfahren Sie mehr über buch oder zeitschriften cover Design
So funktioniert's